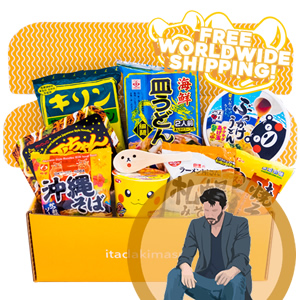 Another month, another subscription box review!  This month we have another box from Japan Crate… the Umai Crate, a pack full of ramen and noodles to enjoy, straight from Japan.  But is this box worth the price and the wait?

Like the Doki Doki Box I reviewed, all of these items are shipped from Japan, which means the items will have quite a long shipping time.  While the Doki Doki Box took about six weeks to get to me without interruption, the Umai Crate took about eight weeks, as it was stopped by U.S. inspections.  This is no fault of Japan Crate themselves, and when I contacted customer service to report that my box had not come in (it arrived a day after I sent the e-mail), they were courteous and more than willing to ship a replacement or offer a refund.  There are subscription services out there that have poor customer service and make it difficult if problems arise, so it is great that Japan Crate is not one of them.

Let’s get to the details of the Umai Box itself.  Each month’s Umai box comes with five (out of a choice of seven) noodle packs to try, with an additional non food item, generally related to cooking or eating the noodles.  The Umai Crate does not account for any dietary restrictions or allergies (understandably), so there might be some packs people with certain allergies can’t eat.  For example, this particular box had a lot of noodle packs with fish ingredients in them, which would be a problem with vegetarians and those with allergies to fish.

Now, as stated, these items come straight from Japan, and as such reading the labels and brands of these noodle packs is impossible unless you know the language.  I don’t, so I’ll be using the handy guide that comes included with the Umai Crate in order to provide accurate information about these products.  Without further ado:

While somen are traditionally served cold, this noodle bowl serves them up piping hot! [This bowl comes] with a broth rich in the flavors of sardine, flying fish, shiitake and four different types of soup kelp.

This was delicious!  The broth was tangy and very good, and the noodles soaked in the flavor of the flavor back well.  I’d be excited if I could order these elsewhere, but international shipping is always a bit expensive. 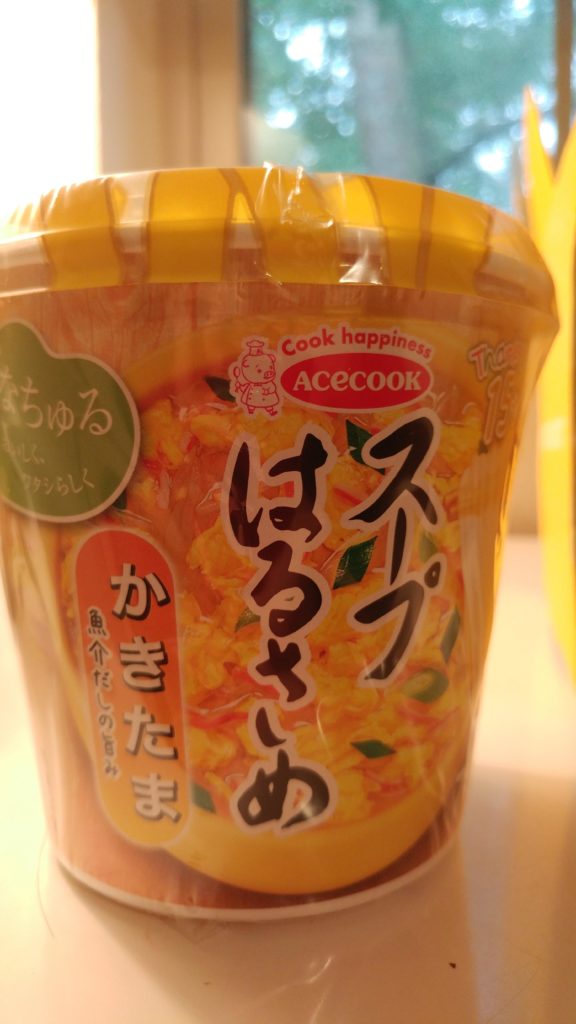 These vermicelli noodles are not only delicious, but they’re also lower in sodium!  The scallop based broth can be enhanced with a few pieces of crab and fresh veggies!

This is my first time seeing clear noodles!  I was a bit shocked at first, I thought I messed up cooking the noodles, but that’s how they were suppose to be!  After getting over the initial shock the noodles were very good, and the broth complemented them well. 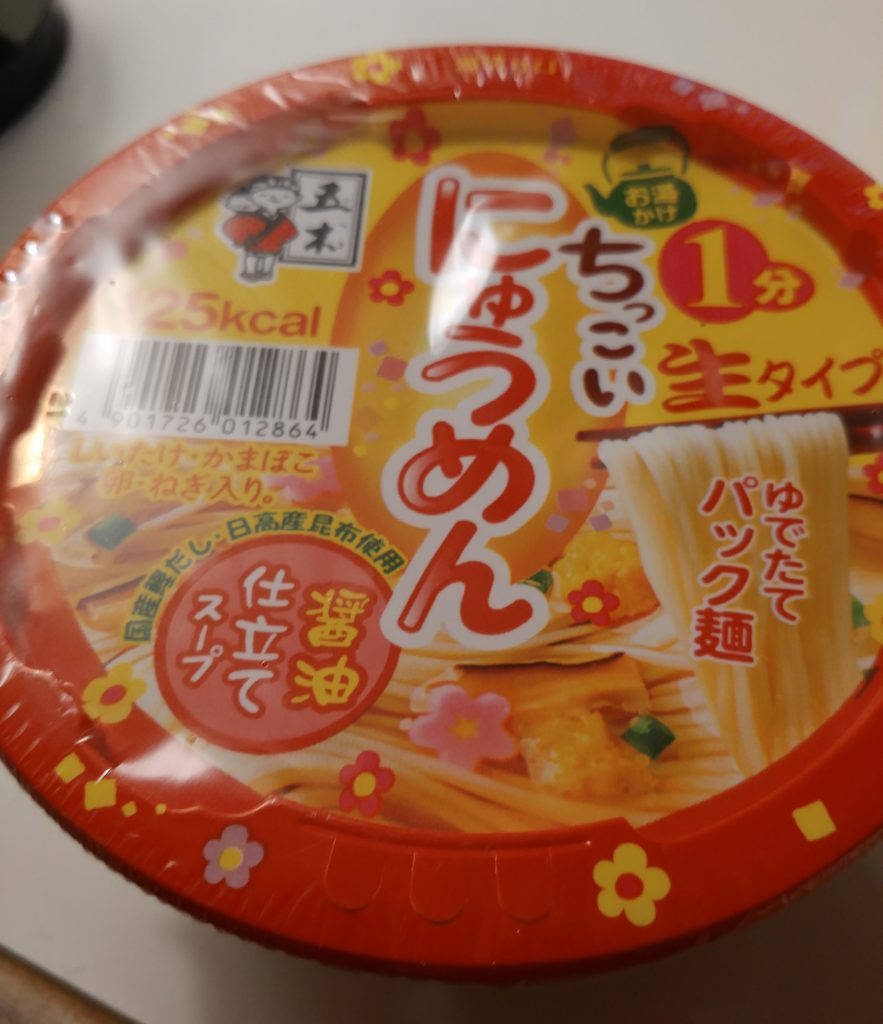 Itsuki Mini Nyumen has a super delicious broth featuring Hidaka Kombu [note: a type of seaweed].  It also has a nice, round flavor from the shiitake and citrus.

This was a decent bowl of noodles, but like the description says, the broth steals the show here.  The noodles don’t really soak up the taste of the great broth, and while that doesn’t make it bland or terrible, it does leave a bit to be desired. 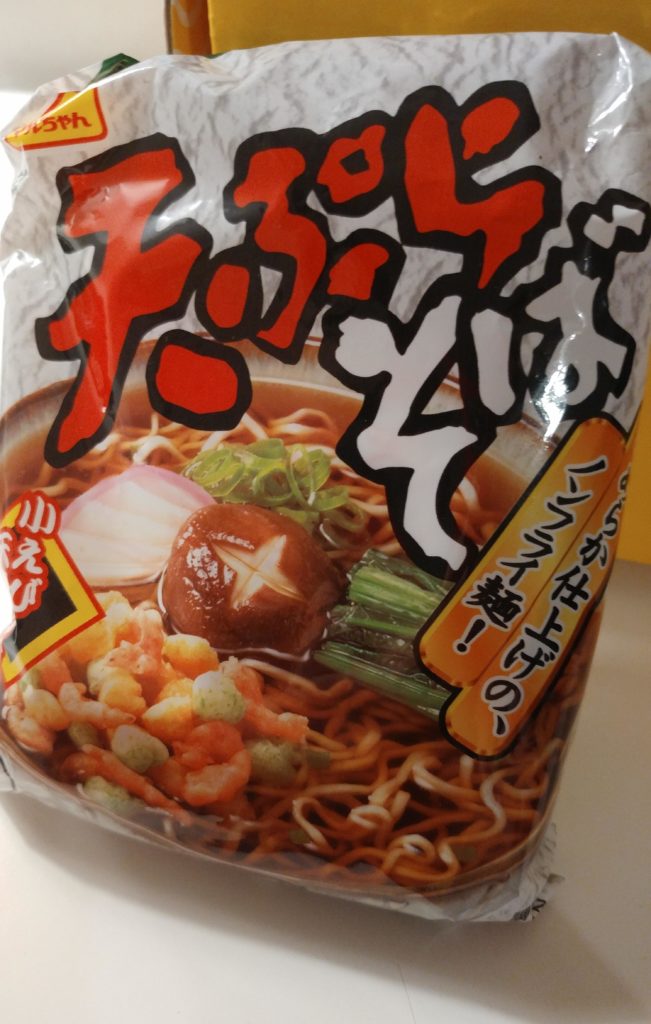 This buckwheat noodle dish is similar to Kanto region dishes with the broth being balanced between soy sauce and sugar.

The broth in this one was quite tasty, as were the brown noodles!  The buckwheat noodles seemed to have a bit of sweetness to them, but the broth was the real winner here.  I was worried that the mixture of soy sauce and sugar wouldn’t be that great, but it turned out better than expected.

The ramen in this dish are made using flour from the Hakkaido region.  While it is a salt ramen, this one is not vegetarian [as] it includes fish and clam in the broth!

This packet was… odd.  Not bad, but it was an unusual set of flavors.  The broth tasted like a fishy chicken noodle soup, and the noodles were also a bit unusual in their texture.  It certainly wasn’t bad, but not the type that I’d go out and buy if I could easily. 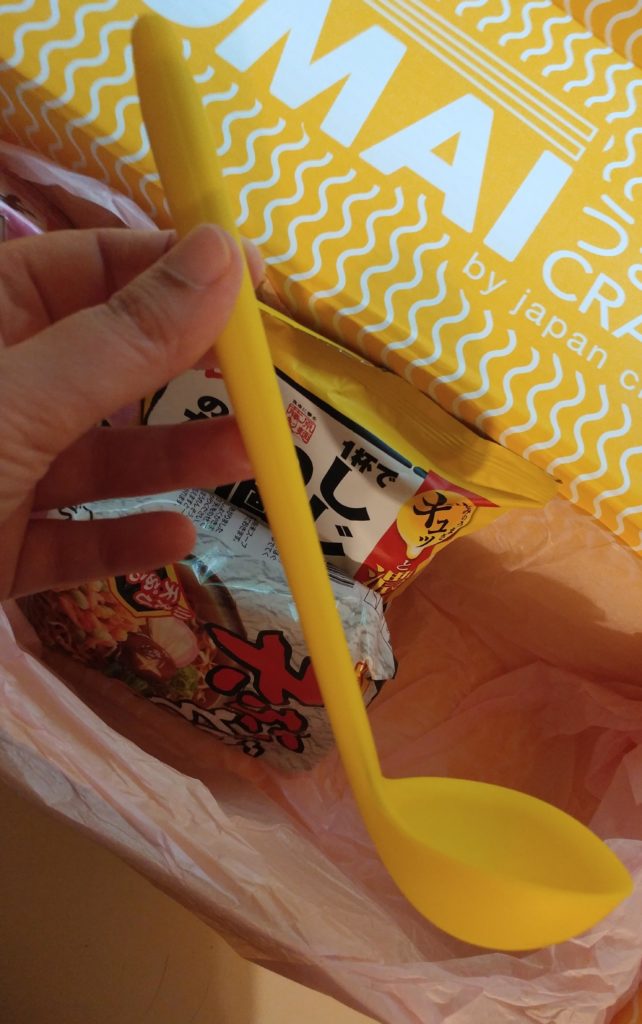 This is a nice silicone soup ladle.  The ladle part is a bit small, so I’m not sure if I’ll actually use it often, but I’m not one to complain about more kitchen utensils.

When I first ordered the Umai Crate, I was worried it would be full of ramen packs that I could easily buy at a local Asian mart at the fraction of the price.  Thankfully, though, this box was full of unique items that I’ve never got to try before.  Of course, given with any type of food subscription box, your mile will vary wildly on how much you like the items within–if you’re not a fan of fish or fish ingredients, then you wouldn’t have liked the box I received.  On top of that, $25 for five ramen packs is a tough deal to sell, though the allure of foreign products does help this a bit.  If you’re looking for something a bit different and don’t mind waiting a while for the crate to ship, then the Umai Crate is a fun box to try.