There are subscription boxes for practically everything you want these days.  It can be fun to get a bunch of new stuff every month, but considering the nature of these boxes you may not be happy with your results.  Of course, that’s mitigated with the fact that most boxes are themed… so if you don’t like Legos for example, investing in a Lego subscription box isn’t going to be the best of ideas.

The Doki Doki Crate is a monthly box with a simple, but vague concept–cute things, shipped straight from Japan.  But what exactly does the cuteness entail, and is it worth it?

Before we get into the contents of the box I’ve received, let’s do a quick overview of how the process works.  Doki Doki is $30 a month (less if you buy multiple boxes at once), and you’ll get shipped five to seven items straight from Japan to your door, including one ‘wearable’ item each month.

This is important to remember, as since the box is actually shipped from Japan there’s some things to keep in mind with all of JapanCrate’s boxes.  First, it’ll take a while to get to you:  After I got the shipping email, the box took a little over a month to get to me, as it was stopped and opened by customs.  Second, you will not have a shipping number or any way to track the package due to the international shipping.  If something goes wrong with your box, you’ll have to contact JapanCrate after six weeks to see what’s up. 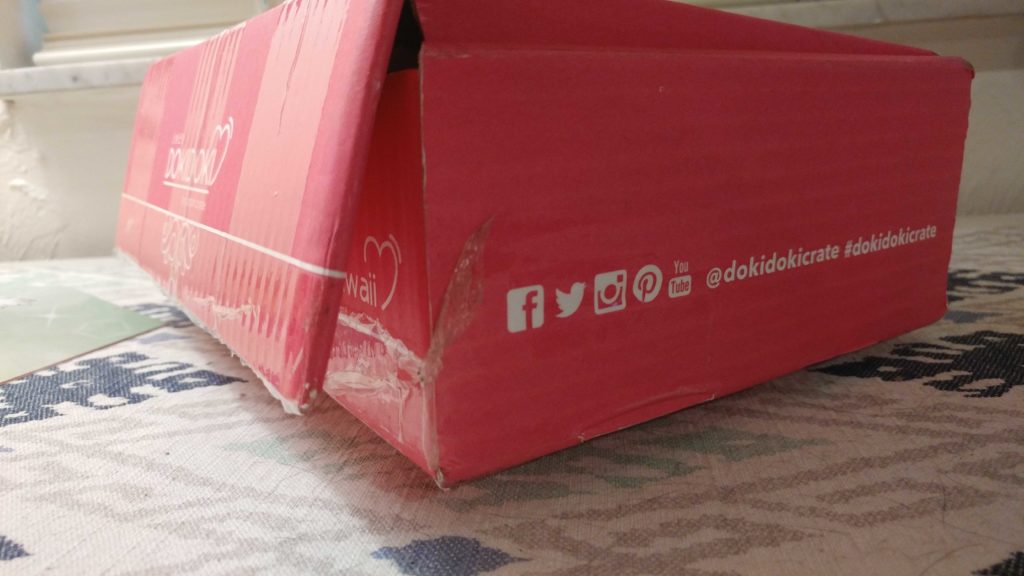 Poor box, ravaged and heartlessly re-taped by US Customs

Are these marks against the Doki Doki box?  No, not really, considering there’s nothing the company can really do to help the process without it costing an arm and leg in shipping.  I did eventually become worried for my package as I needed to review the box, but to a normal subscriber the wait shouldn’t be an issue.

Now, let’s get to the good stuff.  The theme for May’s Doki Doki box is Kawaii Kritters, and here’s what’s inside:

This beret is the Doki Doki wearable this month, and it’s… interesting.  It’s definitely not my style, but then again I probably wouldn’t wear a normal beret out in public, let alone a bright pink one with little antlers on it.  Since I got the box a little later I was able to see others with the hat on and it seemed more fitting for them, but alas it’s all up to personal taste.  For me, this is a dud, but for plenty of others it’s a super cute accessory to wear. 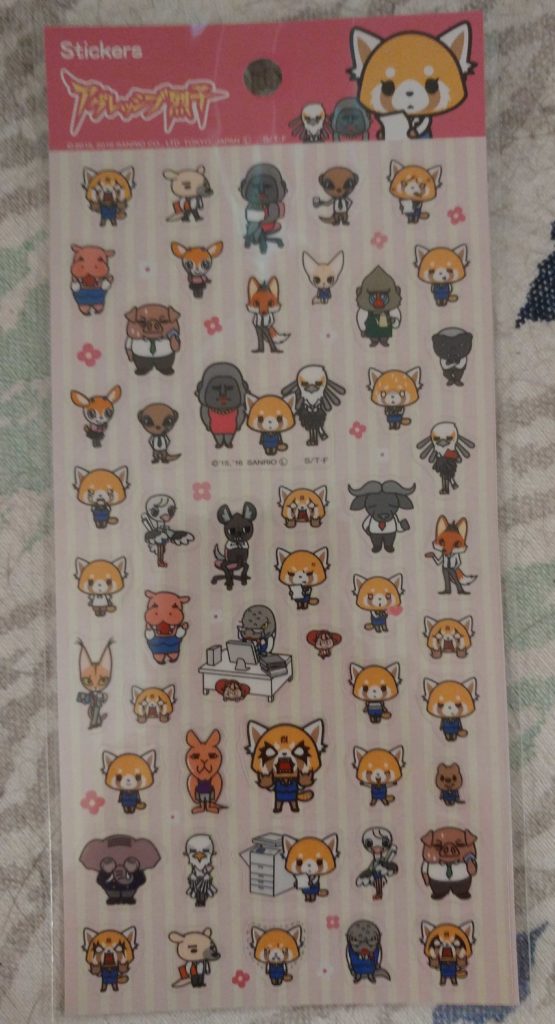 These little stickers, on the other hand, I adore.  Apparently Aggressive Retsuko is the newest Sanrio (aka Hello Kitty creator) character–a driven female office worker that has a bunch of annoying co-workers to deal with.  It’s so cute!  And accurate!  Since I keep a daily planner/journal the stickers come in handy as decorations, but so some people the stickers might be a bit too small to adorn some larger items. 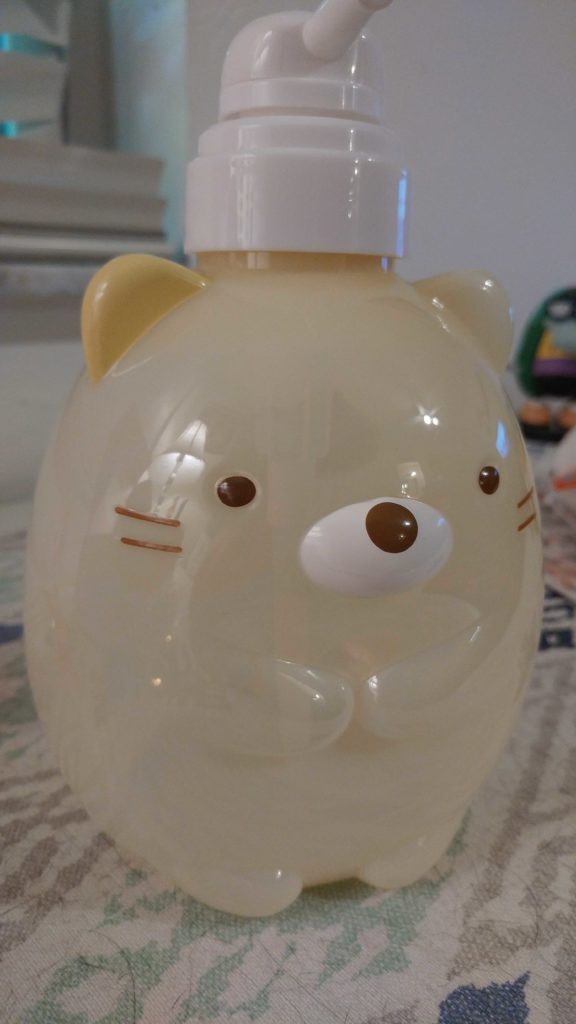 First, let’s get this out of the way… this bottle is huge.  So huge that I couldn’t get it in my shower caddy or sit on any of the lips of my bathtub properly.  This can of course be a good thing if you like having big, cute bottles of shampoo or soap around, but it makes it unusable in my case.  Otherwise, I like it–it’s a giant cat (I… think…) after all!  It’ll make a good gift to someone with a bit more shower space, for sure. 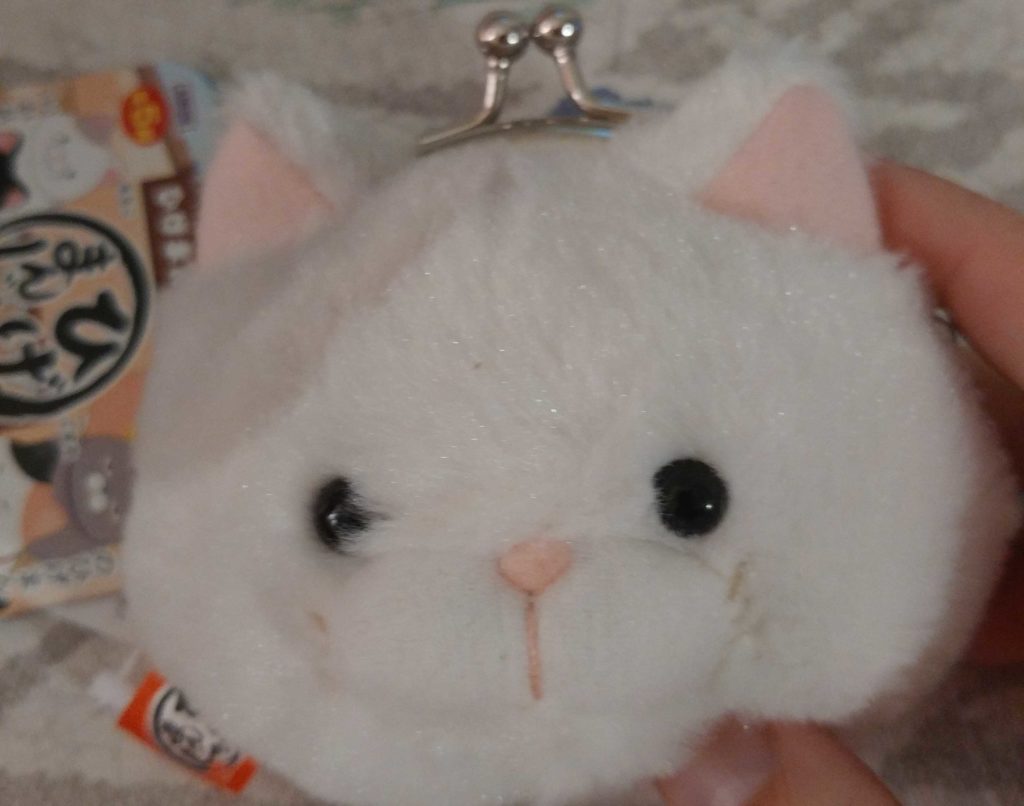 I think that this change purse looks super cute… but ultimately I’m not sure how useful it is for most people that are going to get this box.  Change purses make a lot more sense in Japan than here in America, as larger currency dominations are coins in Japan rather than the mostly paper currency of the U.S.A.. Also, since the change purse is mostly white, it’ll show dirt and the like really easily, making it a bit hard to justify as an accessory or to put on your keychain.  It is definitely a ‘kawaii kritter’, but this poor kitty isn’t going to see the time of day. 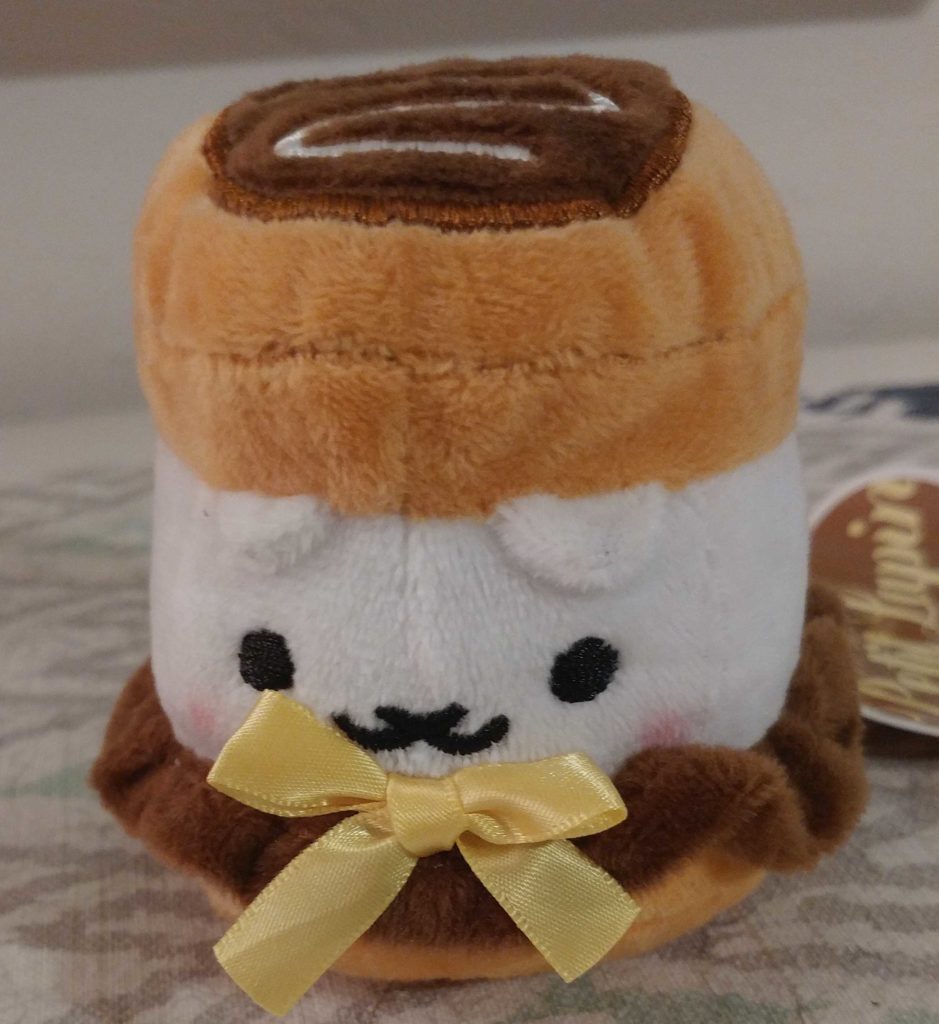 Anyone that knows me knows that I love plushies, and this little éclair bunny is way too cute!  Then again, I also proudly have a bean dog on my desk in my office, so I just might be weird and like the combination of animals and food.  It’s a bit smaller than the average plushie (the size of an actual small éclair), but it’s still quite adorable and easy to place nearly anywhere. 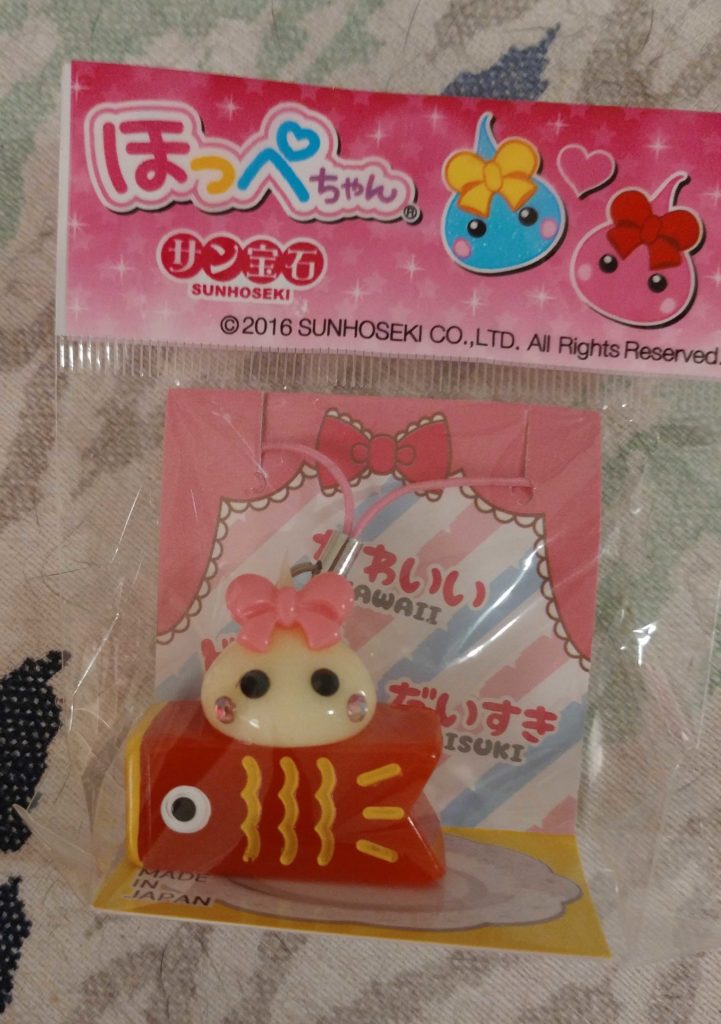 Hoppe-chan is a recurring item that started recently with the Doki Doki box and is supposed to be featured for any other boxes in the near future.  Hoppe-chan is a very popular character amongst little girls (and older folks as well!) in Japan, but it’s hard to import the little slime-looking drop, so having them featured in the Doki Doki box is a great way for foreigners that like the character to get the collectibles.  This month’s Hoppe-chan is one created for Children’s Day, a Japanese holiday that celebrates… well, children.  It’s meant to be a cell phone charm, but considering most popular Western phones don’t have a place to loop the strap, it’s a bit more of a decorative piece.  It looks good next to my suspiciously similar looking Dragon Quest slime keychain.

While I did find the majority of the Doki Doki box items cute, I find myself having trouble fully recommending this as a subscription box.  There’s a wide variety of items that came in the box, but because of that I got a few ‘dud’ items that I’m not sure what to do with.  Also I’m unable to really tell the true value of the items and if the box is worth the asking price… considering the shipping method and how difficult it would be to import the items separately, it’s understandable, but I’m left with a feeling that I didn’t quite get my money’s worth out of this box.

But, if you like what you see, and you enjoy getting random, neat, cute things from Japan, this box is worth a shot!  Otherwise, you might want to look into Japan Crate’s other offerings instead.