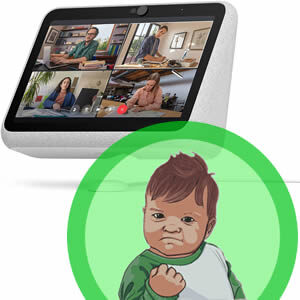 I’ve had an older Portal model for a couple years–one of those early COVID purchases to make it easier for my kids to connect with the grandparents virtually. It works just fine, but one thing that has always bothered me is that is pretty much stuck where it’s plugged in, in our case, the kitchen counter. Now, I’m not saying my kitchen isn’t always 100% spotless, but hypothetically if it wasn’t wasn’t always 100% spotless, I don’t love having it show up in the background of every video call we make.

Enter Portal Go. The newest, biggest version of Portal is meant to be carried around from room to room, allowing you to video chat from wherever you want. The design is clever in that the screen looks like an iPad, but the back is essentially a built-in tablet stand. Just plop it down and “go”.

So is it worth spending $200 for yet another video calling device? My opinion is yes, quite possibly, but with one big gripe. I’ll get to that in a second.

First, the good stuff. The best thing about Portal Go is its size and portability. At 10.1″, it’s close to the exact same size as the 10.2″ iPad. When I first opened the box, I was surprised at how pretty it was. The design is sleek, and looks nice sitting on the counter, but it also looks and feels solid enough that I’d trust my kids to carry it around (and not break it).

It comes with a charging dock that sort of clicks in and hides under the base. According to the specs, the internal battery can last up to 5 hours of video calling. I did not test this but I can tell you that my daughter was able to sneak away to watch YouTube on it for a solid hour and the battery only went down to 93%.

Another positive about Portal Go is the camera. Like previous Portal models, it automatically pans and zooms as you move and adjusts to your lighting. At 12 megapixels, Portal Go’s camera produces video that’s crisp and clear; certainly a lot nicer than the built-in camera on most laptops! You can choose from a decent variety of backgrounds if you’re using it for professional calls, and a lot of stupid silly filters if you’re…not.

Here’s where my biggest problem with Portal Go comes into play: there’s no way to use it with Facebook Messenger Kids. Being a Facebook device I was sure I was just not finding the right place to add my kids’ Messenger accounts, but nope, you can’t use any Portal devices with Messenger Kids.

The whole design of Portal Go is overtly kid-friendly, yet they can’t use it to video chat with their friends? It doesn’t make sense to me. Hopefully they rethink this and come out with an update to allow parent-managed Messenger Kids accounts to be used with Portal Go. Facebook, if you’re listening (I know you always are), please make it happen!

If it could be used with Messenger Kids, Portal Go would be a home run for our family. I love that it can essentially function as a tablet, video calling device, and smart speaker all in one. Bonus is that it becomes an HD digital photo frame as it charges (you can sync it to display pictures from your Instagram feed, pretty slick!).

Portal Go retails for $200, but we’ve already seen it as low as $150. My guess is we might see it drop to $100 around Black Friday. At that price, I’d buy another one. You can find the latest sale price in our deal feed here.