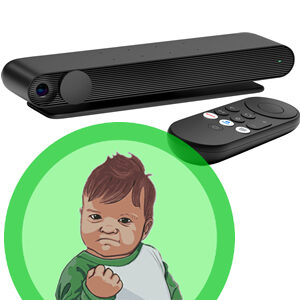 Over the past few years, video chat has become a significantly more important part of our daily lives, namely for anyone working or going to school remotely during the pandemic. Over time, Meta has rolled out support in the Portal community for popular apps like Zoom and Microsoft Teams, which has increased the popularity of the video chatting devices.

The Portal TV is the only product in the lineup that doesn’t include a screen. It requires the use of a television or computer monitor to work. It’s much like a standalone webcam that you would purchase for a desktop computer.

In the box, you will find the Portal TV, a remote control, the A/C adaptor and an leaflet (that directs you to an online setup page). Oddly, there’s no HDMI cable included in the box; strange for a device that requires an HDMI connection to work. You will either need to have a spare HDMI cable or purchase one at checkout.

The size reminds me a bit of the Xbox Kinect that came with the Xbox One several years ago. On the bottom, you will find a stand that can be used for placement underneath your TV. It angles upward, ideal for placement on a TV stand. You can also place it on top of your TV, using the folding stand and the secondary folding clamp at the front of the device.

For those with high wall mounted televisions with no TV stand, placement becomes more difficult. There’s no clamp to fix the device at the bottom of your TV. It would be a matter of placing it on a nearby piece of furniture and running the HDMI cable from the TV to the device.

If you are concerned about privacy, there’s a physical shutter to cover up the camera lens. There’s also a button to turn off the microphone (located on the right side opposite of the camera lens). If that’s not enough, you could simply unplug the Portal TV from the HDMI port on your television and only use it when you plan a video call.

On the back of the device, you will find the power plug, an HDMI port and a USB-C connection. Interestingly, the USB-C port can be used for a connection to a computer monitor. The Portal community also discovered it can be used with USB-C to Ethernet dongles, providing an option for a direct, wired connection rather than having to rely on the Wi-Fi.

The remote control (which is small enough to lose easily) comes with the 2 AAA batteries required for use. There is a direction pad at the top with a select button in the middle, volume up / down buttons, a home button, a back button, a play / pause button and a voice control button. There’s also 3 dedicated buttons for apps; specifically Netflix, Prime Video and Facebook Watch. The power button at the bottom seems more like a sleep mode.

The initial setup is very smooth. You select a language, connect up to your Wi-Fi network (have your password handy), then the Portal TV starts automatically downloading /installing software updates. The whole process took about 15 minutes to complete (the majority waiting for the updates to install). It will require a device restart after the update is installed.

At this point, you can connect the device to your Facebook, WhatsApp or Workplace accounts to get started. You can select favorites to appear on your call list and select specific accounts that you don’t want to be able to call you. You can also setup the Facebook and Alexa voice assistants, ideal if you lose the remote and want to just say who to call.

By default, apps like Netflix and Prime Video are pre-installed. Others such as Zoom, Spotify, Pandora, iHeartRadio, Paramount+, Showtime, Starz, Plex, SlingTV and Tidal can be found on the app store. That being said, the App Store pales in comparison to smart TV or apps found on Roku / Amazon Tv devices.

There’s also a photo app (for viewing Facebook photo albums) and a photo booth app (for taking pictures). The Story Time app is also pre-installed, a fun way to tell stories when you video chat with kids.

I tested a few video calls with both Messenger, WhatsApp and Zoom. Messenger was notably more polished than the other two apps, but the other two were perfectly fine for casual or work calls. Similar to other Portal devices, the camera software automatically follows you around the room. It can get confused with multiple people in the room or pets zipping through, but it’s stable for the most part. Of course, video quality is somewhat dependent on your bandwidth and the bandwidth of the person you are calling.

I tested a few of the video apps and didn’t find any major issues. Netflix and Prime Video were both smooth; easy to sign up and video performance was similar to the apps already built into my TV. That being said, I don’t know why I would specifically use the Portal TV apps unless I had a non-Smart TV. There’s no reason to use a secondary app for streaming video if those apps are already in your TV’s interface. Of course, on the standalone Portal devices, it totally makes sense to use for streaming.

Should You Buy it?

The Portal TV is best suited for groups of people that want to chat in the same space on a video call. While the standalone Portal devices are great for 1-on-1 chat, having a wide angle view of a room is ideal for two or more people. Additionally, the larger amount of screen space on your television is ideal when chatting with up to eight other callers on Facebook Messenger (Four on WhatsApp).

If that’s what you need, the Portal TV is a good, relatively inexpensive (when on sale) way to bring video chat into any room that has a television. It can also be more relaxing to lounge on a couch and chat rather than sit at your desk using a traditional webcam; effectively the same argument gamers use when discussing console versus PC.

We’ve seen the Portal TV as low as $49, which is a fairly frequent sale. We have also seen bundle deals both offered online and at warehouse clubs. that can bring the per unit pricing even low, perhaps ideal when outfitting multiple televisions in your home with a camera. You can find the latest sale price in our deal feed here.