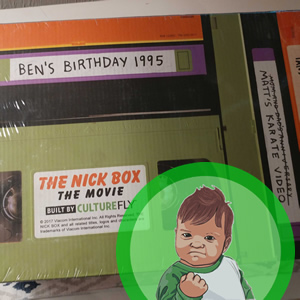 If you’re a 90’s kid, you’ve surely watched a ton of Nickelodeon back in the day.  Plenty of shows and cartoons from Nick are pretty big staples to those that grew up in that era–cartoons like Rugrats, The Angry Beavers, and The Wild Thornberries are sure to bring up fond memories for the TV addicted child.  So imagine my surprise to find The Nick Box, a quarterly subscription box meant to aim straight at that 90’s Nick nostaglia.  Can this box possibly stand up to the lofty standards of the rose tinted glasses?

This quarter’s box is the ‘Nick Toons Rewind’ box, and is mainly centered around the older Nick Toons of the 90’s.  Surprisingly, the slight majority of the items came from Rocko’s Modern Life… one of my favorite cartoons from that era, so this box was definitely off to a good start with me!  The box was supposed to come with nine items, but my box seemed to be missing the Nick Toons stickers, though that’s not much to be upset over.  Let’s look at each item with a bit more detail: 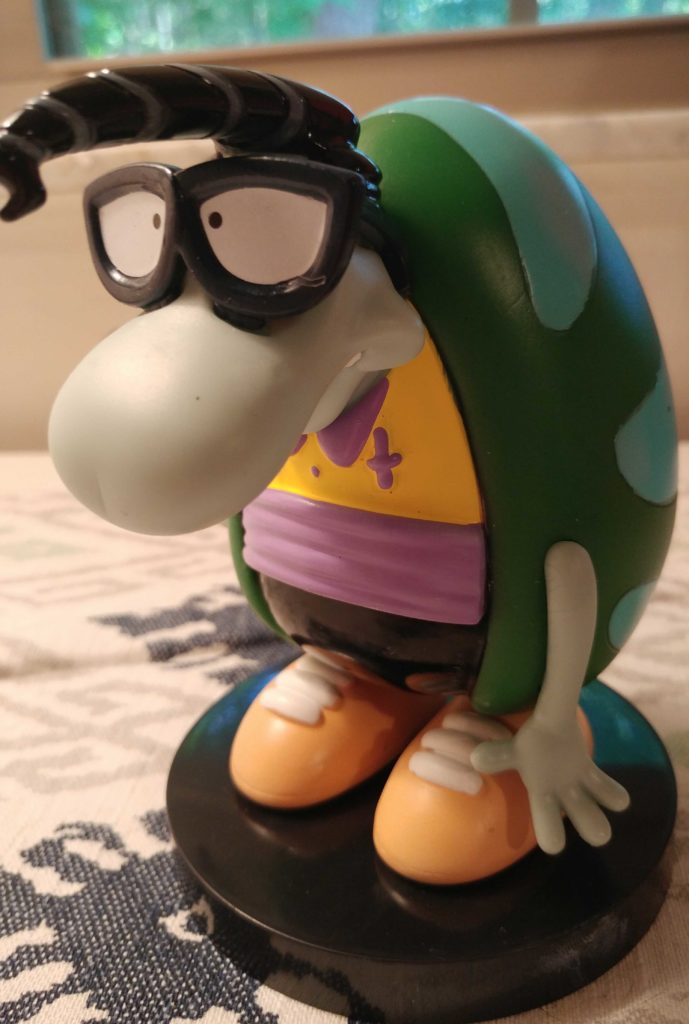 Now this super neat… a nice sized vinyl figure of a Rocko’s Modern Life character!  The craftsmanship on this isn’t perfect–there’s a small error on the paint job on mine–but it’s still overall sturdy, nice-looking, and surprisingly large for something they could have skimped out on. 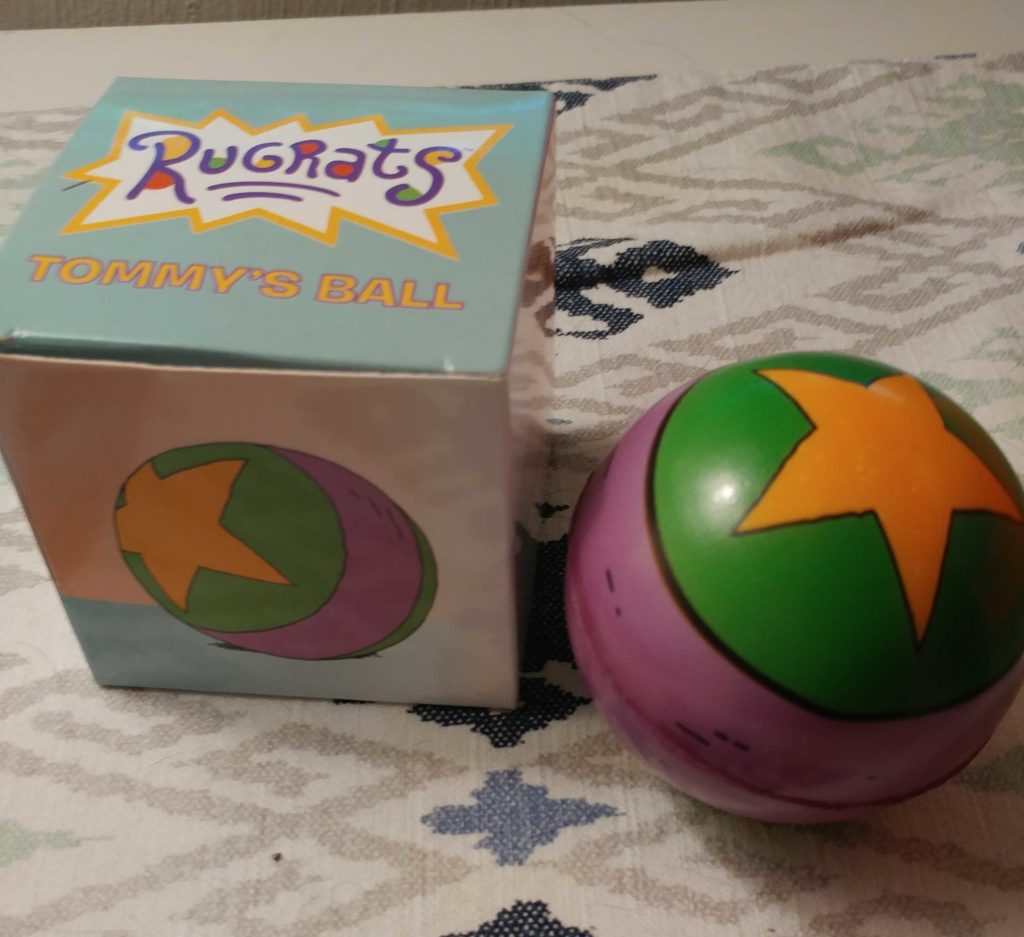 This, on the other hand, was a bit smaller than I thought it would be.  It’s essentially a small ball modelled after the Rugrats toy.  It’s not really bouncy or anything, though.  I’ll likely give this to my cats as a nice toy they can play with that’s big enough to not get caught under furniture. 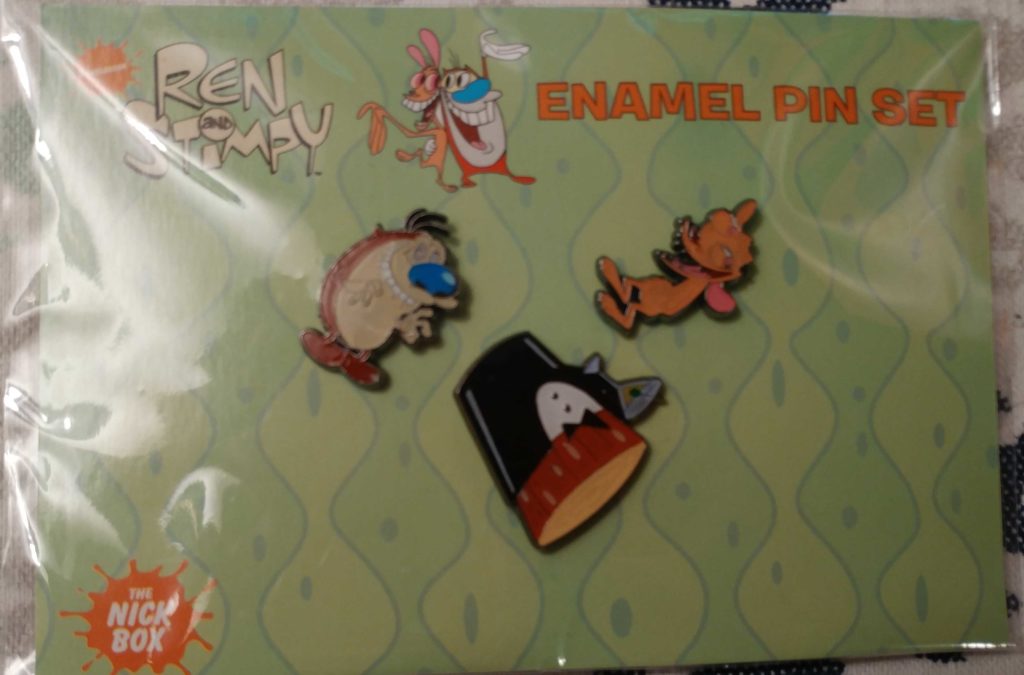 Three nice little Ren and Stimpy pins.  I really like how they look and the material they’re made out of, since most pins are cheap button pins.  They have a nice weight to them, too.  These are definitely going up in my office with the rest of my pins! 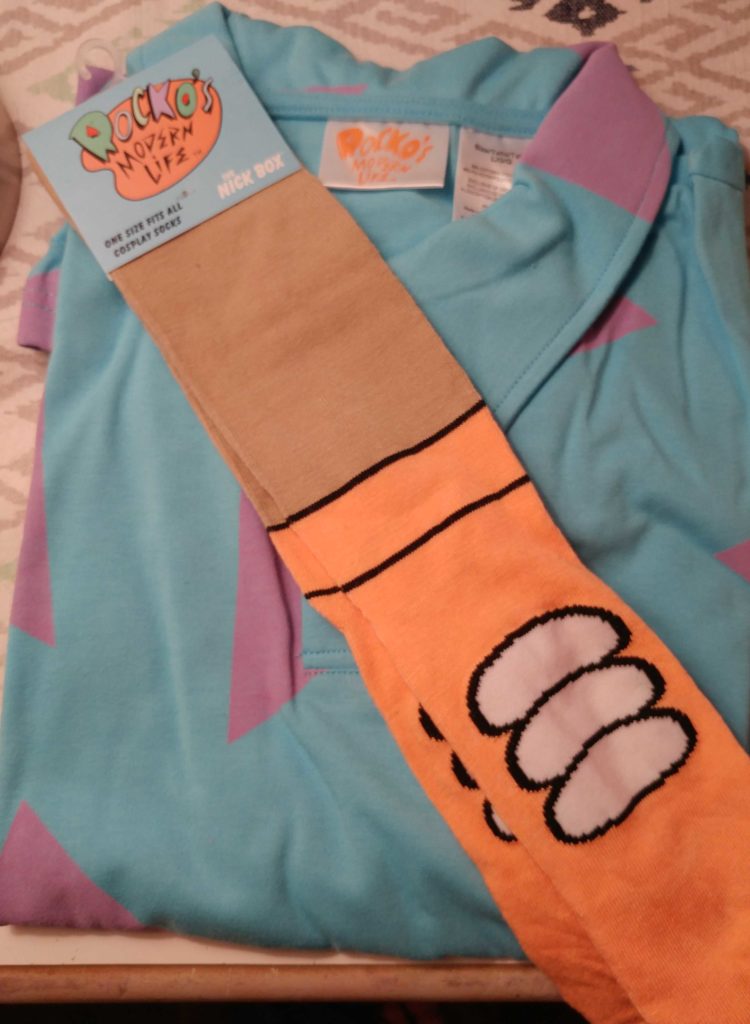 Now, this is fun, if… weird.  Dress up just like Rocko from Rocko’s Modern Life with his iconic shirt (in the size you’ve chosen for the box) and some one size fits all socks.  You might be wondering about pants, but Rocko didn’t wear any pants!  It, of course, fits properly, but I can never see myself pulling this out and wearing it… ever.  Maybe for Halloween, but the reference is just obscure enough that I don’t know if anyone would know who I was dressed as. 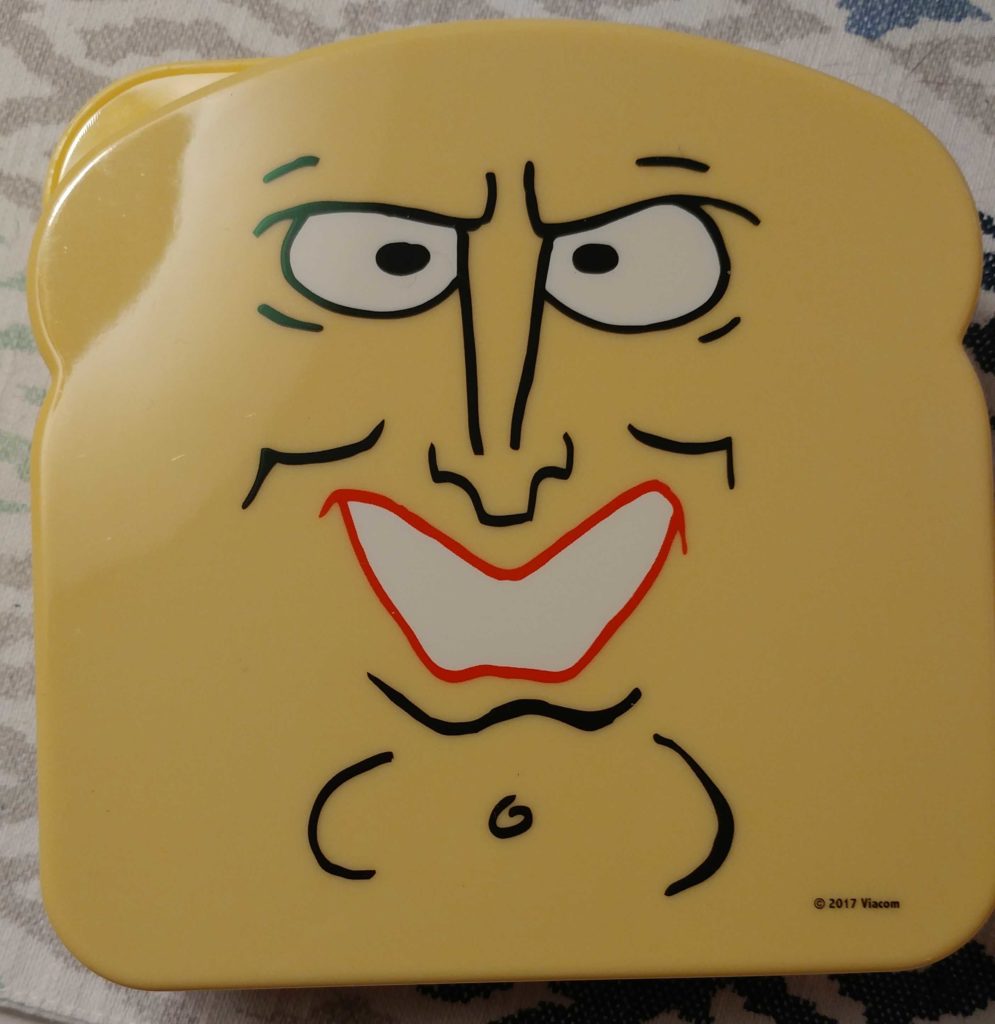 It’s awesome looking and works as intended, there’s not much else to say.  My boyfriend immediately took it for himself after my pictures. 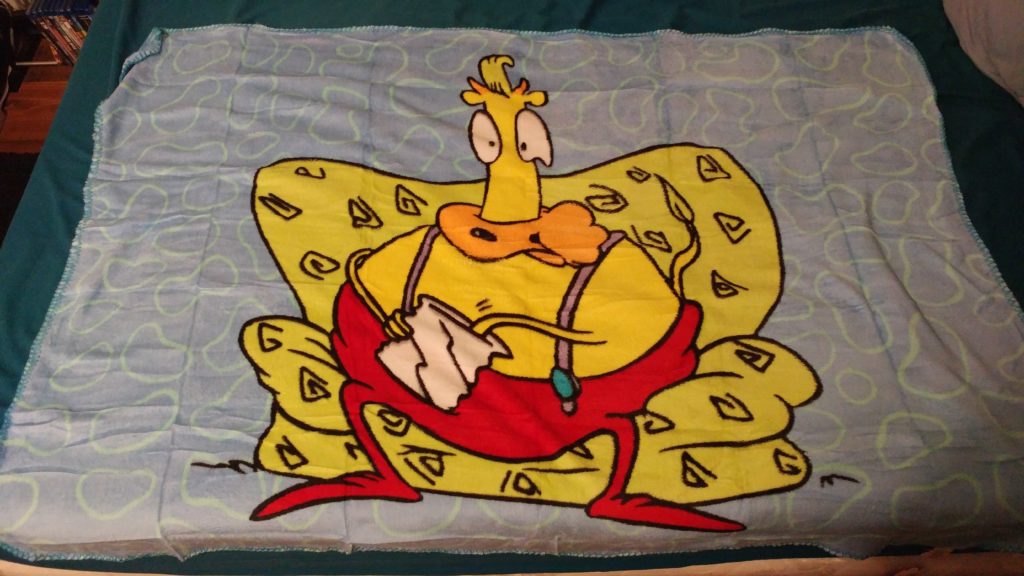 I’m always a sucker for fleece throws, so a throw with a character from my favorite Nick show is a huge hit with me!  It’s also very soft, too, and the same size as an average throw.  This will definitely be in my couch rotation! 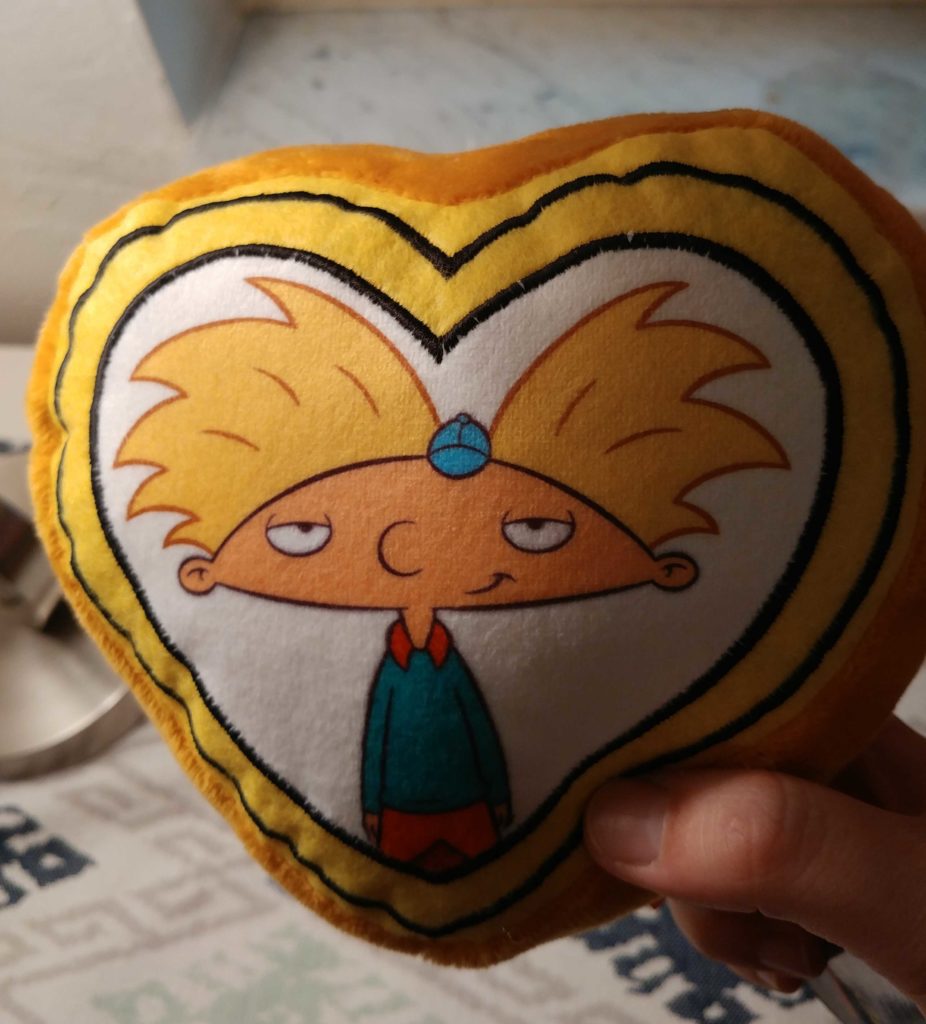 It’s a cute little plushie to show your undying love for Arnold to anyone that bothers to come into your house.  As much as I like Hey Arnold, I know some people that would appreciate this more, so I’m going to make this a nice little gift. 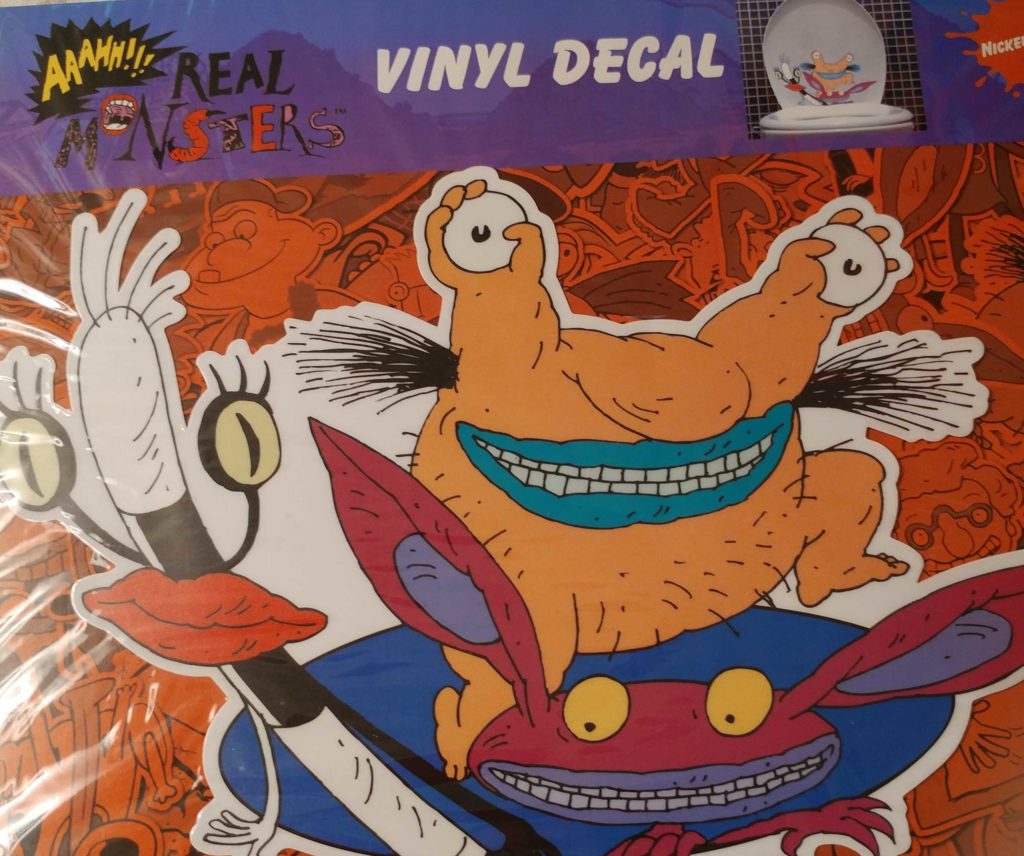 A nice sized Ahh! Real Monsters decal.  I really like the idea of putting it on the toilet seat like the package says, but there are any number of places to stick this, and it looks nice to boot, provided you don’t mind having such blatant fanservice up on your walls.

It’s hard to truly measure the worth of the Nick Box, as each item is crafted uniquely for said box.  That said, for $50 plus shipping, the box is a huge blast from the past and just a treat to go through.  You can’t really put a price on nostalgia, after all!  I’d recommend this to any 90’s Nickelodeon fan–you’re bound to get a few really neat items, and some more to give away to friends and family to share the love!