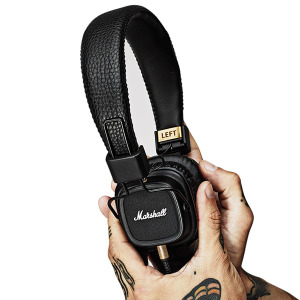 When it comes to speakers, amps, headphones and the like, the range in options is so broad. From brands that pop up overnight, crowd-funded Bluetooth speakers, and audio principles that predate cassettes, buyers are faced with sifting through more and more products year after year. No such segment could be considered more crowded than portable headphones. Like it or not, the rise of Beats by Dre and the presence of Bose has meant that premium portable headphones are more than just a practical consideration, they are also an accessory along the likes of jewelry.

Into this often gaudy segment comes the Marshall Major II. This corded, collapsible on-ear design is the new version of the five-year old Marshall Major design. Before getting into what this new design brings in terms of use and feel, durability and so forth, I want to cut right to the Major II’s most obvious asset. The design is drop dead sexy. After spending considerable time with the Marshall Major II using a variety of portable and fixed audio devices and media with an on-the-go emphasis, I’m still taken by the look.

Normally, when I review headphones and headsets, I come to a point when I have to explain just how ridiculous the user might look wearing the headphone in a public place, like a subway or an airport, or a campus, or wherever. The Major II is another story altogether. Both from afar and down to the smallest of details, these headphones are some of the best looking ever made.

The design is deceptively simple. The medium sized (for portable) cans that bear the Marshall logo are obviously meant to suggest that familiar guitar amp look. These cans are joined together by way of two forks and one slim, stitch and leather headband.

The external look is nearly all black except for the small, white Marshall logo lettering. There is a touch of gold on the cable, and the detachable cable itself is well worth the description that I will come to presently.

First, it’s worth noting that there are several touches of style only visible when the headphones are in the user’s hands. The headband states Marshall and “EST. 1962” on its underside. Within the headsets black hinges are two spots of brass that read ‘LEFT’ and ‘RIGHT’ respectively, and again this is something only the owner would notice. Four other tiny spots of the gold brass can be found on the cans. The small earcups contain a hidden mesh overs the drivers, and the presentation is of a headset that looks better and better on closer inspection. (The packing hasn’t been neglected either, but I digress.)

Finally, there is the cable. The half coiled 3.5mm four conductor to three conductor is a microcosm of the Major II’s inarguable and (in my case) welcome style. The combo dangle mic/button includes a black on black raised Marshall logo. The three conductor side that plugs into the headset is straight with a rough gold surface for grip and looks, while the four conductor side is a 90 degree gold grip black plastic combo, complete with subtle little M on edge. 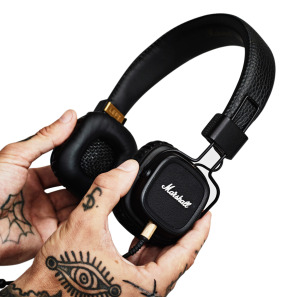 Killer style is nice, but it wouldn’t count for much without quality sound. As headphones go, the Marshall Major IIs have a throaty sound that was clearly designed with the last 50 years of music in mind. Fair warning, these 40mm, 64 ohm drivers can get ridiculously loud, especially if combined with a powerful headphone amp. Assuming the user can hear at all, 100% volume is well beyond the painful danger level. That loudness may prove useful if trying to use the headphones for a portable speaker, but most users should find the Major IIs as loud as they want them to be.

Back to the throaty sound characteristics, and what I’ve found is that stringed instruments are full of flavor. At the same time, vocals are pleasantly clear. That flavor presents a sense of powerful bass and treble (as though the notes really move the driver) but without any kind of overpowering or washed out bass characteristics that some headphones fall victim to. So for, it sounds awesome, right?

Well considering that this is done with an on-ear design, it can be intoxicating. Then again, there’s some trickery going on here. Using ‘Straight to Hell’ by the Clash for example, and the bass drum and percussion instruments are the restrained part of mix. It’s not like they’re not discernable, but the drivers power is clearly focused on that warmth I referenced earlier.

Flipping over to the theme track from ‘Sunshine’ (Adagio in D Minor) and the already powerful synthesizer notes become even more dominant, and overshadow both the beats and the piano notes. 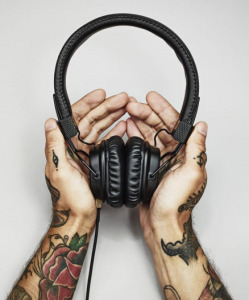 Basically, the denser and more diverse the music, the more the Major IIs have trouble. The recent Trent Reznor/Atticus/Ross/Karen O version of ‘Immigrant Song’ is a good example of where this limitation can cause the greatest trouble.

Everything is there, but the soundstage is too narrow for everything to breathe in proportion. It’s important then to bear in mind that these are walking around headsets and not studio monitors, and such difficult fare is always going to have a problem when the listener is on the move.

One of the reasons that I can decipher so much about the sound characteristics is because the Major II has excellent passive noise cancellation. The outside world is turned way down whenever the headset is worn and music is on.

There is a very easy way to see this passive noise cancellation in action. By holding the Major IIs in hand and letting the earcups meet, whatever is being played will be inaudible, and it’s that same tight seal that keeps both sound in and out.

Fair warning. For my decent sized head, the Marshall started off a seriously tight fit, the kind of tight fit that left my left ear in pain after just a few hours use. I resorted to wrapping the headset around a computer tower for a few nights on and off to help speed along the break-in time. It helped, but I suspect that the coil design may mean that it’s going to take a lot longer to really break in.

The Major II’s earcups have a hinge on each side, and the earcups fold into the band for transport. Tightness aside, I really like this design. Not only does it significantly reduce the footprint, but it does so in a way that protects the overall design. The folded size is good for cargo pockets and bags, and is further helped by the detachable cable.

That excellent passive noise cancellation I mentioned before is virtue of the closed design on the squareish earcups and the attached cushions. And it’s a tight feel, but it’s also very easy to zone out while the music plays, which is exactly what enthusiast headphones are meant to do. 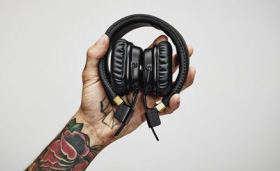 I’ve made it this far without addressing just how the Major IIs are different from their predecessor, the Marshall Major. Certainly, some of the style notes have been adjusted, and more importantly, the sound has been revisited, but the most major differences can be found in the build. The original Majors had some durability problems that the Major IIs design has specifically tried to address.

The materials all around have been adjusted with areas like the hinges reworked for greater resilience. The two exposed wires on either side might raise an eyebrow for some buyers, but they are my preferred design as they prevent the typical headband disconnect that can affect some headsets, and they help the earcups have more travel without any extra concern. 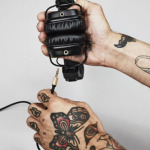 As I mentioned before, the cable is detachable. Likewise, it can be plugged into either ear, which is great for a number of reasons. It lets the user choose which side to wire, and gives them a back-up jack in case one fails. It also offers another benefit that is popping up on some newer headsets, the ability to daisy chain in another headset.

The daisy chain lets the headset share music with another, even a 3.5mm four conductor set of earbuds. This is a nice feature when sitting near someone (like on a plane) and wanting to listen to the same thing but without using a splitter.

The coil cord is very pretty and very useful. At first, I didn’t regard the coiled part as all that useful, but in use it does a great job of mitigating the snags that normally ensnare corded headphone users as they move about. The cable has some extra thickness and a muted black which combine to make it look tough.

The dangle mic (which again is stylish) works well enough with any phone, and my conversations were always received well. 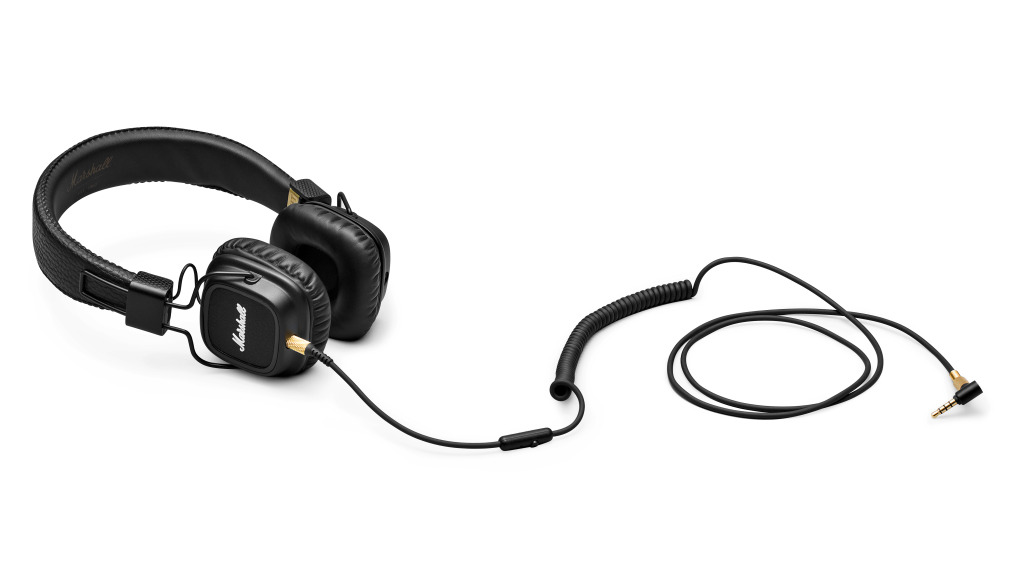 Sadly, the same can’t be said for the button. The single button, which ought to send and end calls, as well as pause, unpause, Fast Forward and Rewind audio tracks, only works on the iPhone. It’s completely useless on Android. I tried several workarounds and even attempted to contact Marshall on the issue (it’s not a limitation noted in the product documentation) without any luck. Subbing in another cable provides different results, and I consider this a pretty major flaw that ought to be corrected pronto.

The Marshall Major II really scores with its signature style, and the sound is a winner though it won’t be confused for monitor quality. The tight fit and button issue are all that hold it back from being a no-brainer recommendation. If Marshall can address these issues then the Marshall Major II will be a must-have in the corded on-ear segment.