Popular with consumers who have ditched expensive cable and cut the cord, Roku hardware has long offered access to many popular streaming video applications for a fairly low cost. Released during March 2013, the new Roku 3 hardware provides upgraded speed, a slick interface and a nifty feature on the remote control that helps you watch content privately. At a $99 price point, the Roku 3 replaces the Roku 2 XS in the Roku lineup. Roku is continuing to offer the Roku LT, Roku HD and Roku 2 XD at prices ranging from $49.99 to 79.99.

While the hockey puck size of the Roku hasn’t changed much, the device is much slicker with rounded edges and glossy treatment on the sides. The device is slightly heavier than the Roku 2 and smaller than the Apple TV. In combination with the rubber lining on the bottom, that keeps the hardware sitting in place rather than sliding around to relieve the tension in the HDMI cable.

Speaking of HDMI, that’s the only way to send video and audio to the television. There’s no component out, composite out or optical out. You need a high definition television with an open HDMI input to use the Roku 3. However, there is an Ethernet port for a direct wired connection to a home’s router and a USB port to watch content on a portable hard drive or thumb drive.

However, the speed gained from switching from the first generation Roku hardware to the Roku 3 is just stunning. The upgraded processor and dual band Wi-Fi make sure everything keeps zipping along, especially evident within the major applications like Netflix, Hulu Plus or HBO GO. It’s also much faster to go from startup to watching something than alternatives like gaming consoles of applications built into Smart televisions. 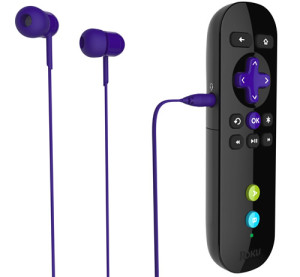 Besides the actual Roku 3 hardware, the remote control has gotten a really useful upgrade: a headphone jack. When a set of headphones is plugged into the remote control, the sound is automatically muted on the television and the user can adjust a volume rocker on the side of the remote to increase volume. It allows you to watch the television without disturbing anyone else and Roku includes a free set of earbuds in the box to get started.

My only complaint is that wireless interference can occasionally be an issue with the remote and cause slight audio dropouts. Regarding controlling the device, Roku has included motion capabilities for games (similar to the Roku 2) and uses Wi-Fi Direct technology so the user doesn’t need line-of-sight to navigate the device.

If you have long suffered with the old, scrolling Roku menu, you will be overjoyed to know that the entire user interface has been completely retooled for efficiency. Rather than scrolling horizontally, the UI displays three channels per row and can be navigated vertically. In addition, the two column design allows users to scroll through the channel store on the left while the right side either shows the channels themselves or information about content. (Roku 2 owners should be on the lookout for the new interface in a downloadable update during April 2013.)

Beyond the slick interface, the search functionality is also a major component in the redesign. Searching through the channels installed on the device, the interface will bring up content in addition to every channel where it can be streamed. For instance, a search for The Walking Dead will bring up the two seasons on Netflix Instant as well as the third season on premium services like Vudu or Amazon Instant Video. It’s really impressive how quickly search queries pop up in the interface as well.

With over 750 public channels available to users as well as a variety of private channels, the Roku 3 supports major applications such as:

Interestingly, New Yorkers can install the Aereo private application and watch local live television networks such at NBC, ABC, CBS and FOX. Aereo is also planning to expand to an additional twenty-two markets around the United States, but is also tangled up with litigation with CBS. For anyone that has Time Warner Cable, there’s an official application on the Roku store that allows subscribers to watch hundreds of live channels. This could be an ideal solution for a secondary room like a bedroom, thus avoiding the cost of renting an additional cable box.

Unfortunately, Roku still doesn’t support YouTube. According to analysts, this was previously due to Roku’s hardware limitations and Google’s minimum hardware requirements to stream YouTube content. However, it could be resolved soon due to the upgraded hardware.

You can also install the Plex channel to watch YouTube content using the Plex server installed on another computer in the household. Plex also allows you to watch other forms of streaming Web content on the Roku as well.

For anyone with a smartphone or tablet, you can also stream YouTube content, AirPlay-style, on a Roku 3 device using an application called TwonkyBeam.

I’ve tested tons of set-top, streaming media devices like the Apple TV, Boxee Box, WD TV Play and Vizio CoStar. If you have tons of content already stored on your personal computer, the WD TV Play is a much better option due to the much wider array of media compatibility. If you are already invested heavily in premium purchases within Apple’s ecosystem, the Apple TV will be your best bet.

However, the Roku 3 is easily the top dog for users who want the fastest way to get to streaming video content. The interface is snappy, incredibly easy to use and search is way better than Google TV’s interface. The remote control headphone feature is very handy if you don’t own a pair of wireless headphones, as well. The Roku 3 is a solid choice for the main television in the home theater as well as secondary televisions around the home in the bedroom, office or other areas.

Regarding price, it’s unlikely that Roku will offer discounts within the first three months of release. However, if sales on the Roku 2 XS were any indication, look for deals later this year in the $85 to $90 range as well as bundled deals with premium service providers like Netflix or Hulu Plus. Some third party dealers are already discounting the Roku 3 in the $90 range though.

But What if the Avengers Wanted a Roku 3? 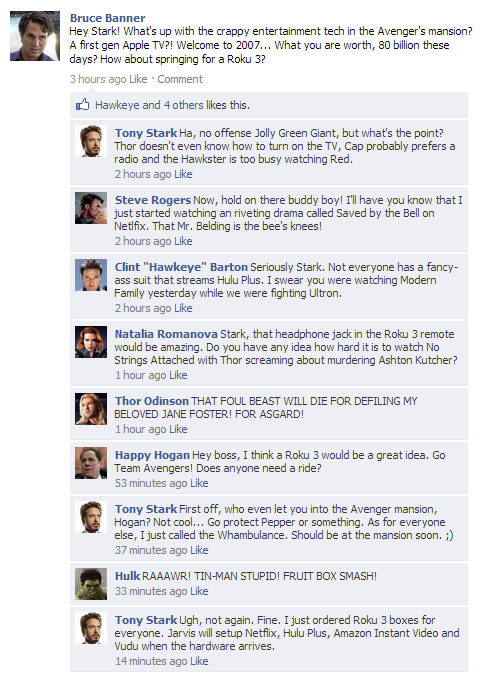