Disney+ Review: Packs Quite a Streaming Punch at a Low Cost 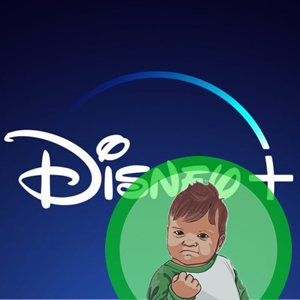 It’s taking on streaming giants like Netflix, Hulu and Prime Video; certainly no easy task. The subscription gets you streaming access to Disney, Pixar, Marvel, Star Wars and Nat Geo movies and shows, Ultra HD streaming video quality and up to four streams at once. 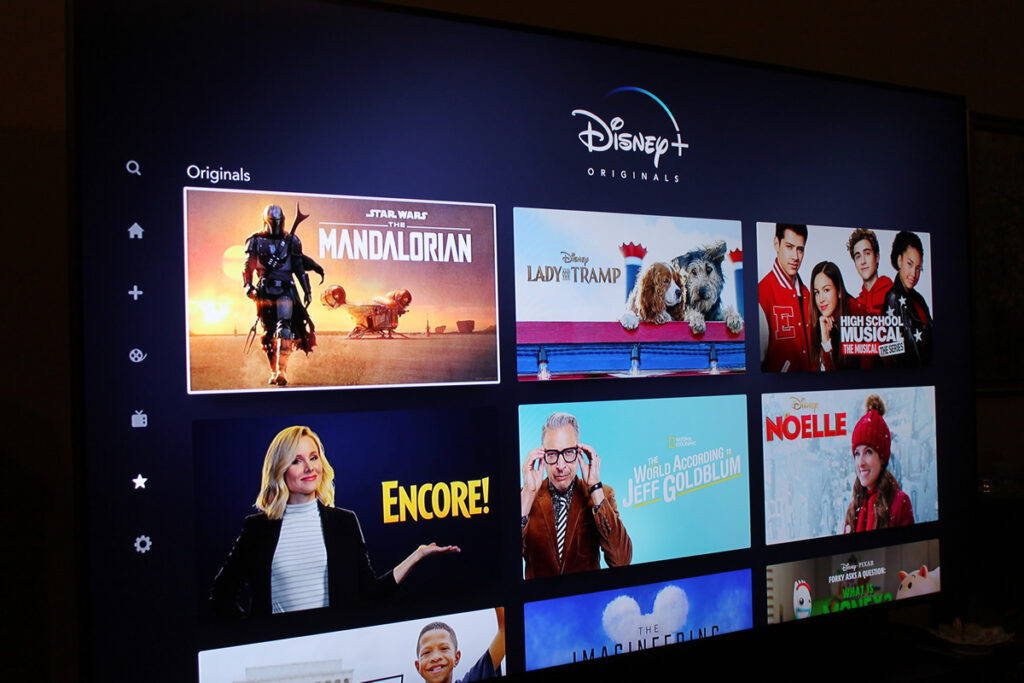 Is Disney+ easy to use?

Yes Disney has utilized all the elements that make services like Netflix or Prime Video simple to use and packaged up content in the familiar horizontal scroll format. In addition to the curated collections of content like Pixar, Marvel and Star Wars listed on the opening screen, you will find categorized content all the way down the list as well as a recently watched section for picking up where you left off. 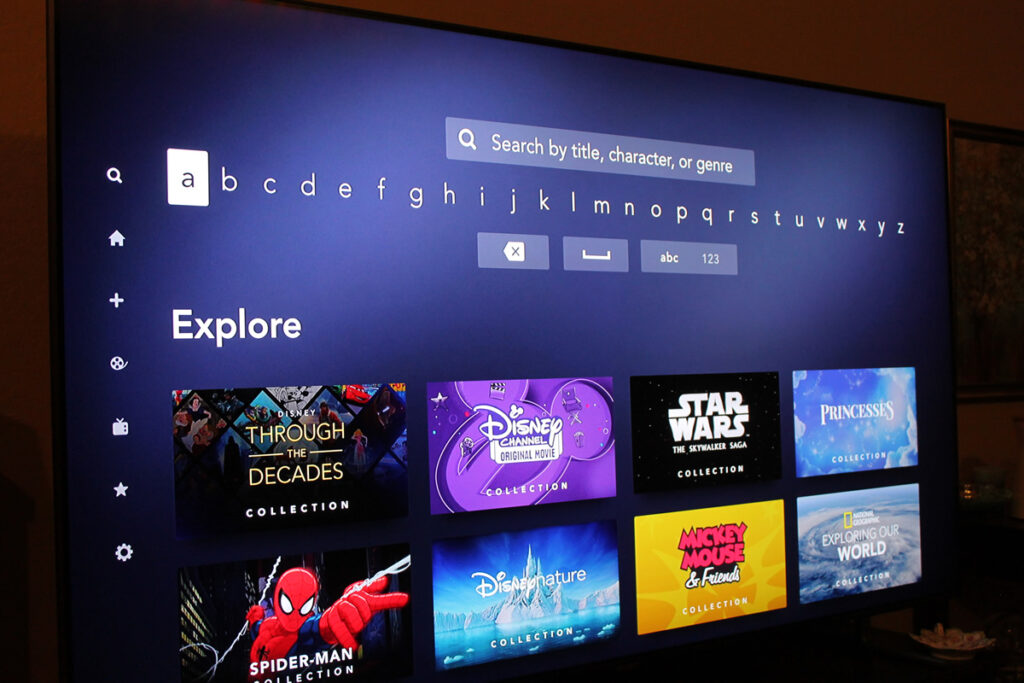 I was surprised to find curated collections of content listed in the search menu. If you don’t know what to search for, you can look through content categorized by themes or characters. 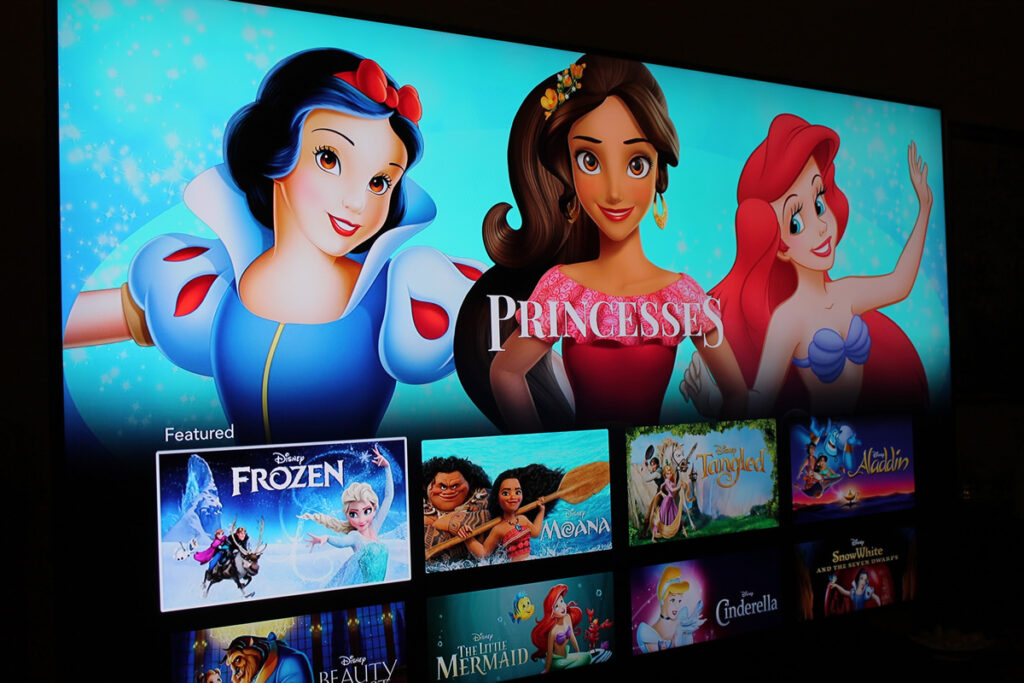 Beyond that, search is really snappy. I entered in a search for one of my favorites growing up, the 1975 film Escape from Witch Mountain. It popped up within the first 3 letters of the search. It’s an auto-populating search, thus results will start to appear while you are typing. 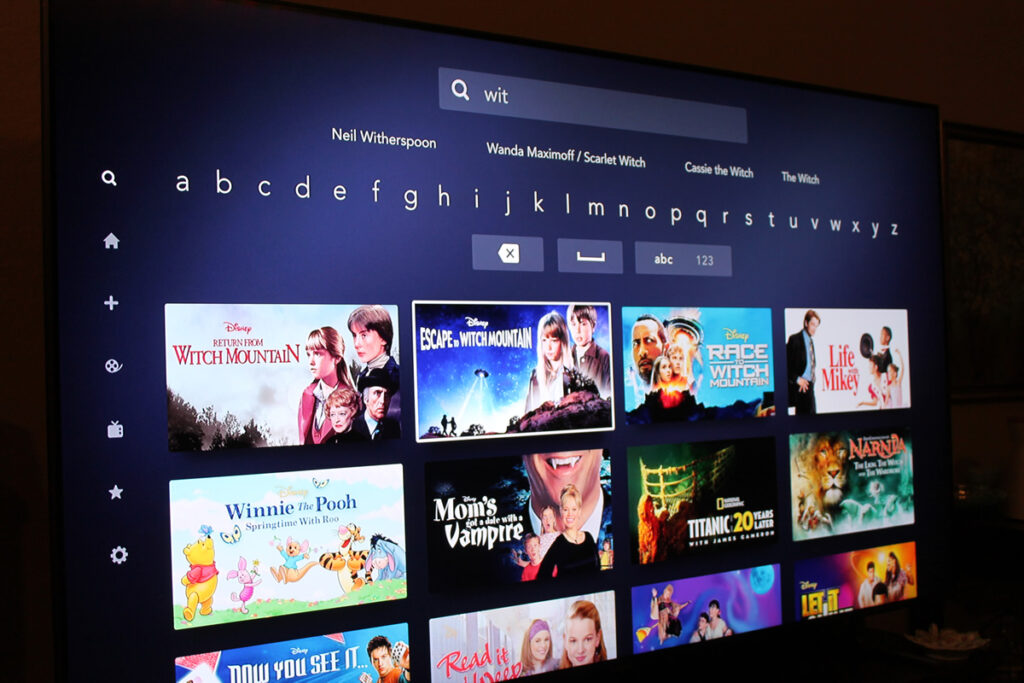 If you find something you like, you can tag it to your watch-list for viewing later. You can also use the left navigation menu to go directly to movies, series or Disney+ Originals. Within those options, a horizontal navigation appears on the page to cycle through different categories of movies and series. You can also setup seven user profiles on a single Disney+ account. Everyone in the family can have a curated list of their favorite shows and their own watch-list. 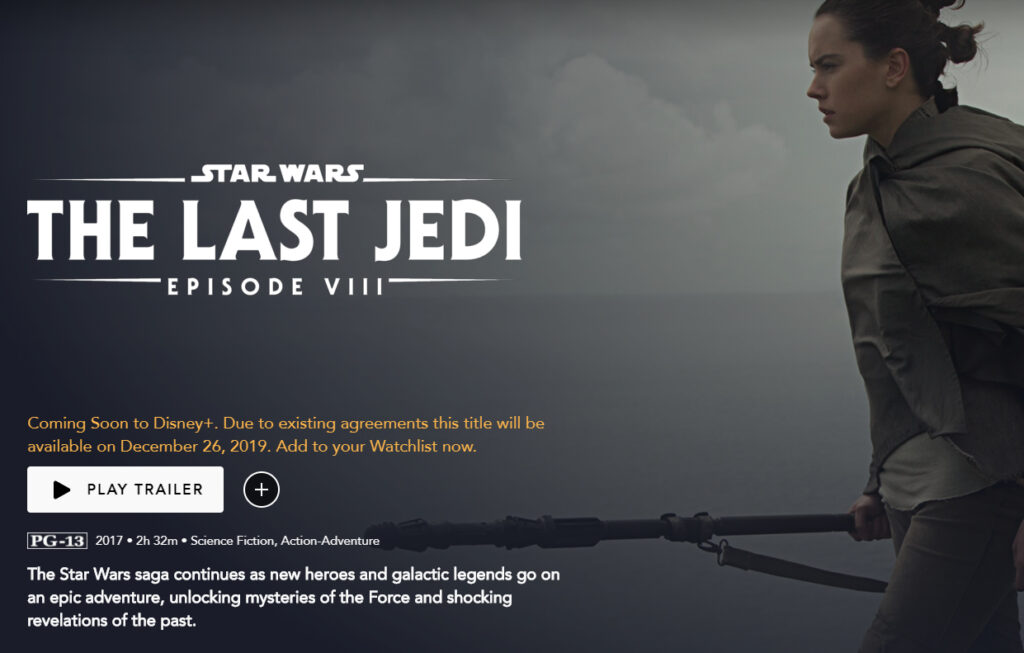 Yes That goes for both kids and adults. The content library is enormous, especially at launch. And compared to another recently released service, it makes the Apple+ content library look silly.

Just a day prior to launch, Disney worked hard to get tons of Marvel movies on the service. It now includes the vast majority of Marvel’s movies, with the remaining Marvel movies (currently on Netflix) scheduled to move into Disney+ within the next six months. 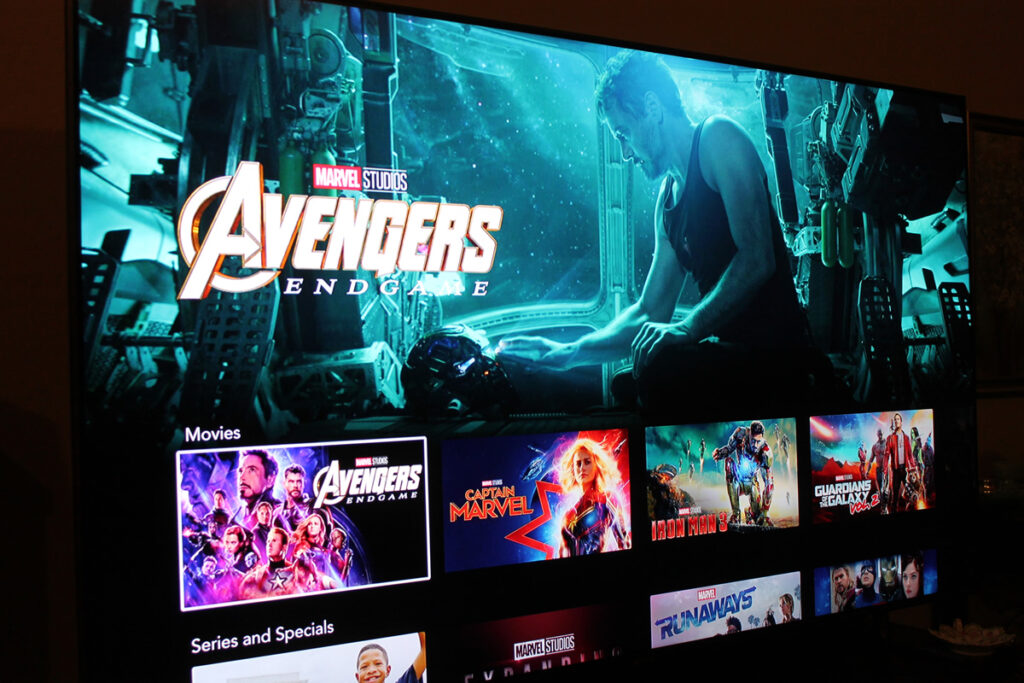 Currently, you can find all the Iron Man films, most of the Avengers films (including Endgame), the Guardians of the Galaxy movies, the first two Thor films, Ant-Man, etc…  You can also find the large library of animated series (like 1990’s X-Men) as well as Marvel’s live action shows (but not the ones produced by Netflix like Daredevil).

Almost all the Star Wars movies are on the service, with the exception of Last Jedi and Solo. I imagine The Rise of Skywalker will be exclusive to the service as well, after the theatrical run. Outside of the movies, Disney has several of the popular animated Star Wars series in one place; Clone Wars, Rebels, Resistance and all the LEGO shorts. 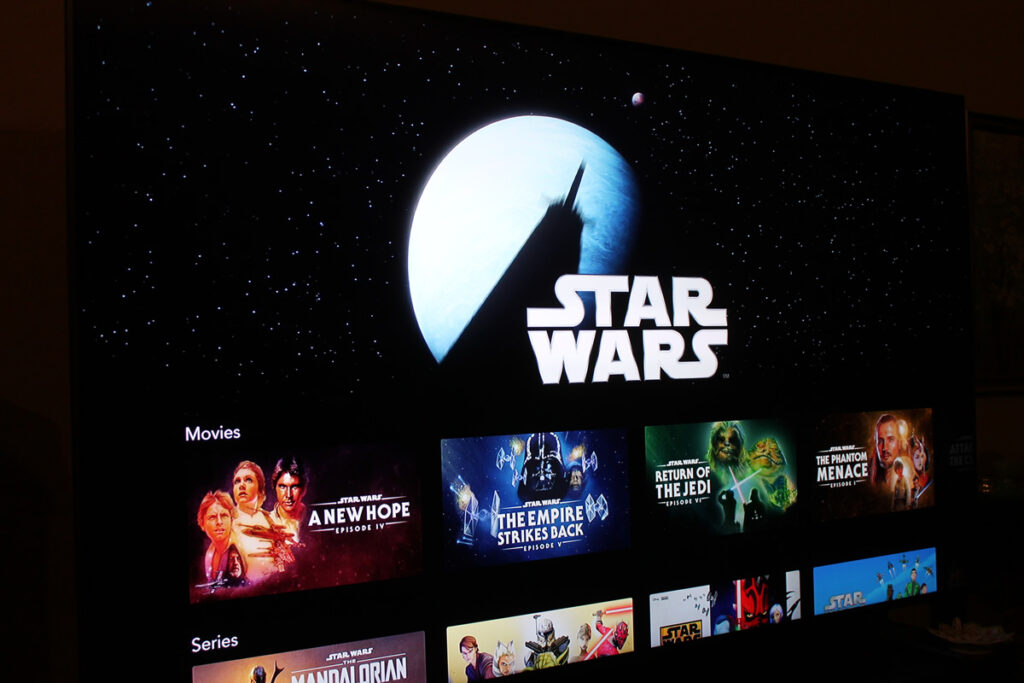 In the Pixar area, you will find the first three Toy Story movies, Cars, Wall-E, Up, The Incredibles, Brave, Ratatouille, The Good Dinosaur, Finding Nemo, Finding Dory, Monsters University, etc… You can also find all the fun Pixar shorts the studio includes at the start of their movies. One of my favorites was Lava. It was super cool to see that in HD again.

If you are into documentaries and science, you will find a ton of Nat Geo content. My wife’s favorite will probably be all the vets & pets shows like Dr. Pol or Dr. Oakley’s shows. There’s also a section for Nat Geo produced movies as well as original content like the quirky Jeff Goldblum show. 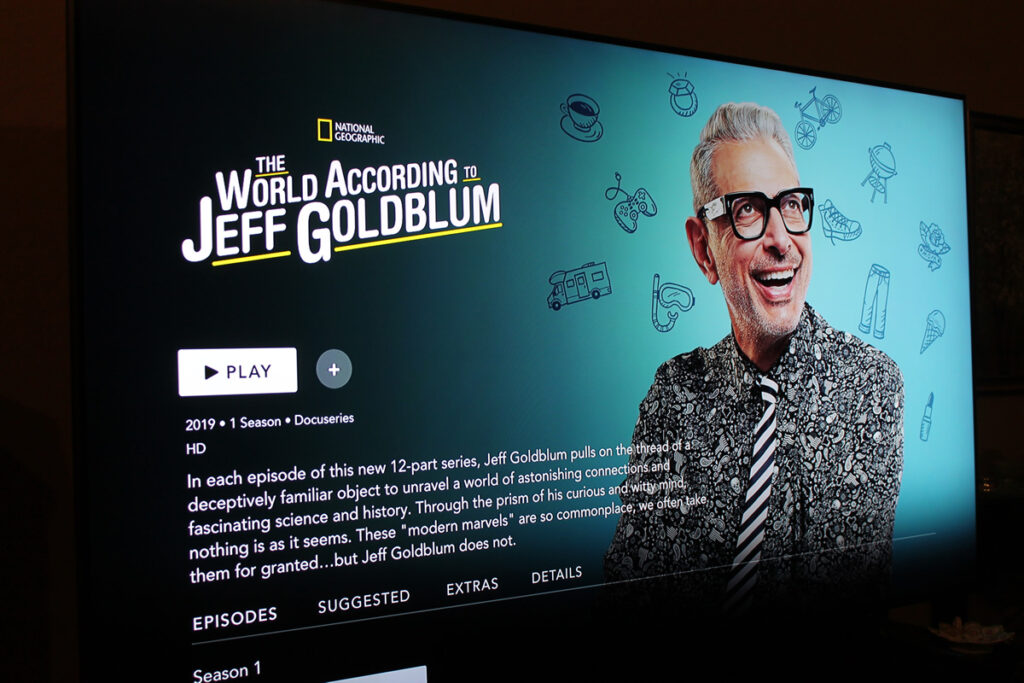 Of course, the volume of content available for children is ridiculous. There are animated classics Disney has pulled out of the vault like The Little Mermaid, The Lion King, Bambi, Cinderella, Sleeping Beauty, etc… There are Disney Channel favorites like Lizzie McGuire and Wizards of Waverly Place.  There’s a ton of Disney Jr. shows like Doc McStuffins and Elena of Avalor. There’s all the old school live action Disney movies like Mary Poppins and Pete’s Dragon. The list is nearly endless. 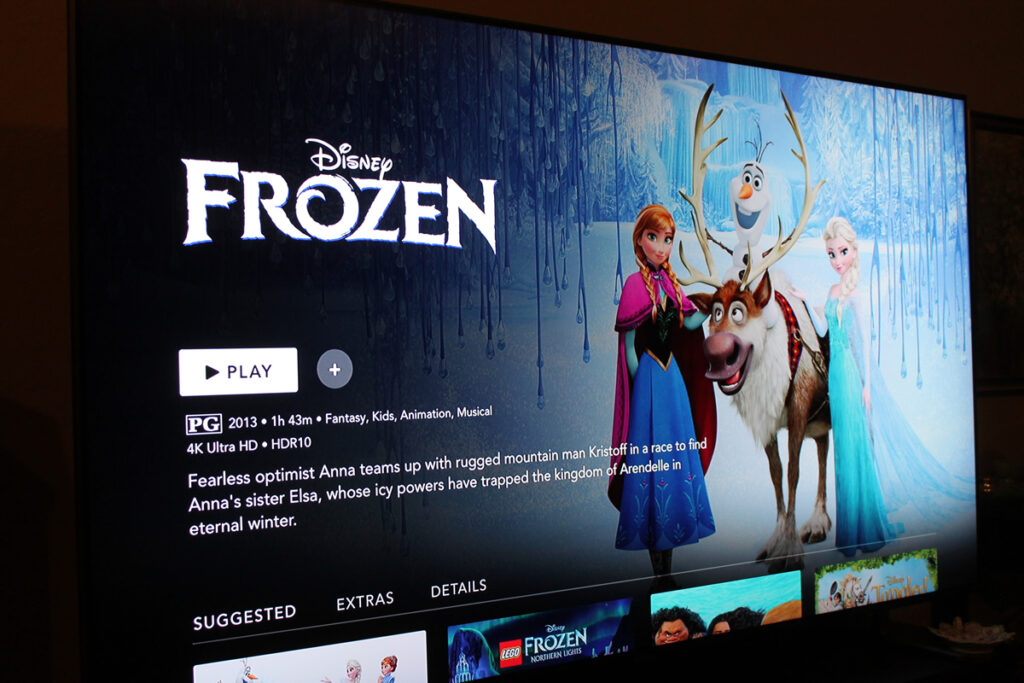 Regarding originals, I don’t love that Disney+ is adopting the episodic model for releasing original content. Perhaps I’m spoiled by Netflix binge sessions. That being said, the first episode of The Mandalorian was great and I’m looking forward to each Friday release. The few minutes of Jeff Goldblum’s show I watched was silly, but I get the niche audience it’s designed for. Kristin Bell’s Encore looks like a great, feel-good show as well. 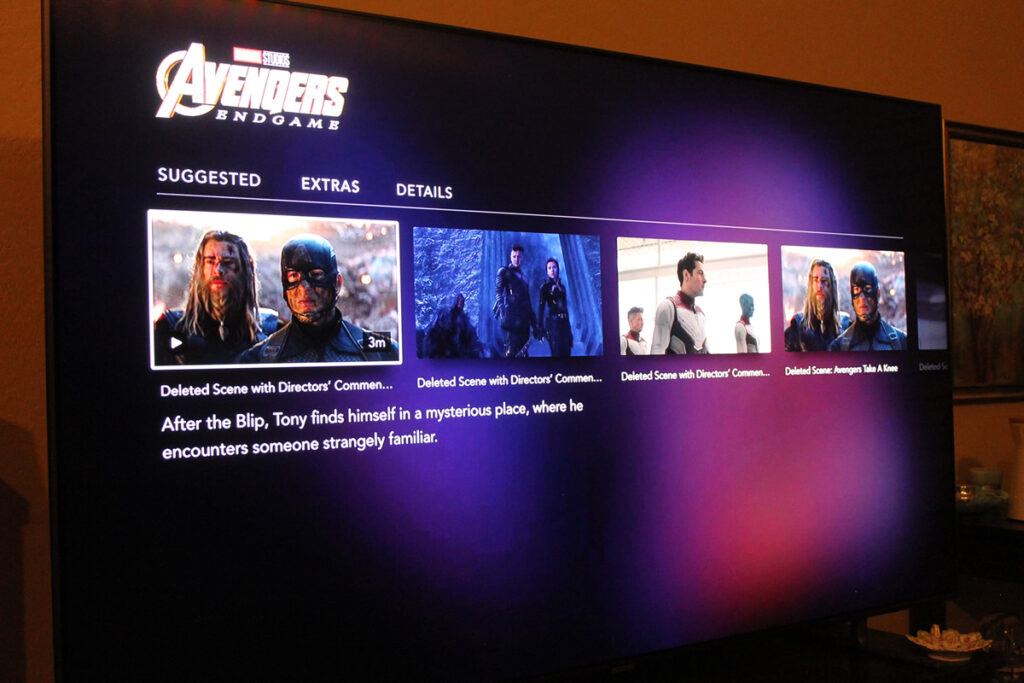 Beyond the actual movies and shows, you can also find additional video content within the extras. Some of that includes director’s commentary tracks (like director commentary for Avengers: Endgame) as well as deleted scenes from the films (also with commentary). On the animated movies, you can find slideshows of deleted scenes that weren’t fully animated.

Yes I previewed a variety of content, everything from original shows like The Mandalorian to old school Disney movies like Treasure Island. The Ultra HD content was phenomenal, especially animated movies like Frozen. I did find The Mandalorian a bit dark at times, but adjusted my TV settings to find the right balance. 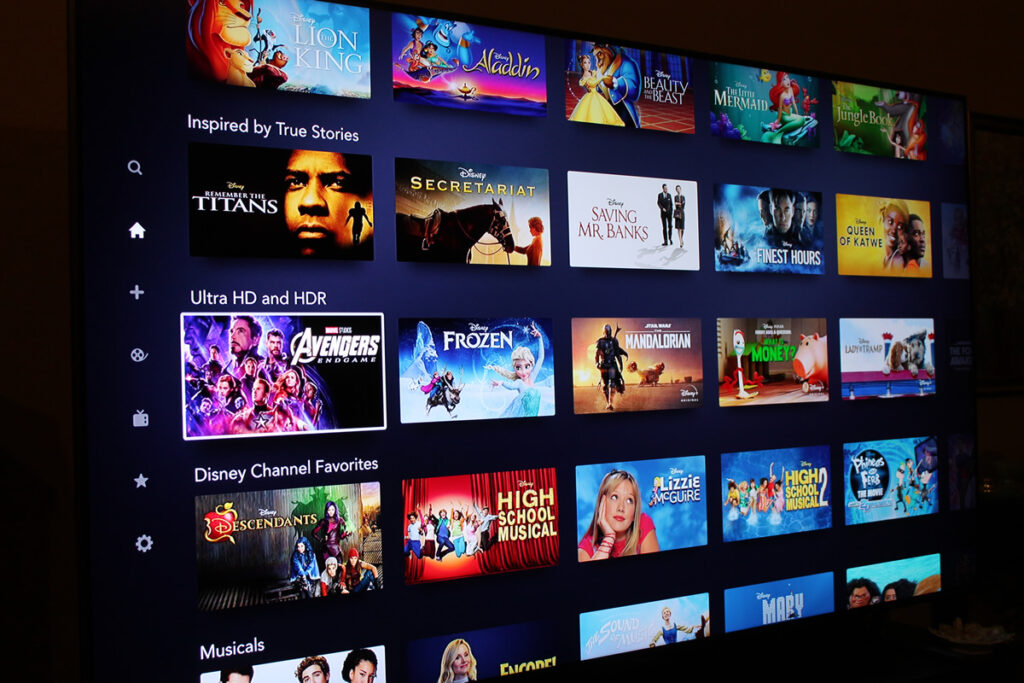 As a home theater buff, I really liked the Ultra HD and HDR section of the menu. It provides quick access to high resolution content that will look amazing on your 4K television. In addition, you can find specific details about what video and audio formats are available on the Details page of a video. For instance, Avengers: Endgame supports 4K Ultra HD, Dolby Vision, Dolby Atmos, HDR10 and regular HDR. 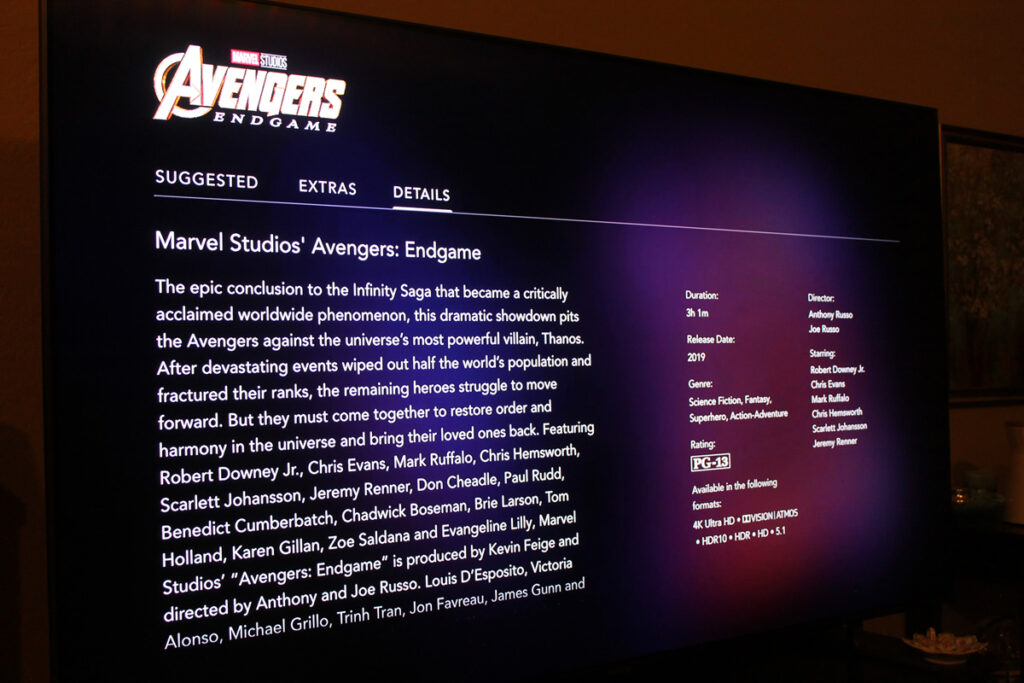 Be warned, navigating the menu is somewhat troublesome at launch, likely due to the high volume of people attempting to try out the service. I ran into issues loading specific pieces of content, basically getting stuck on a forever loading circle. That being said, once the content page loaded, I had no issues getting the movie or television show going. 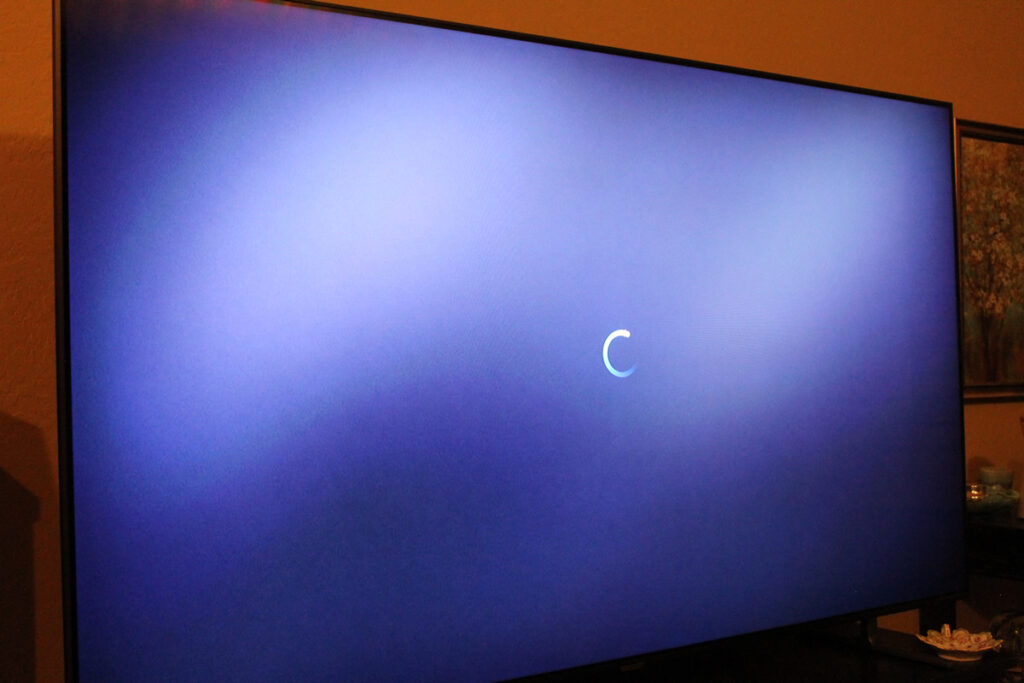 The service allows you to stream content on up to four different devices at once. I tested this out with 3 devices, my TV (wireless), my computer (wired) and my Roku (wireless). I didn’t have any issue running all three at the same time on the same network, ideal for families that will be running multiple streams.

That being said, I am running a Netgear Orbi Wi-Fi mesh setup in my home as well as 350 Mbps download speeds. Video quality of the streams will be highly dependent on  your download speeds. You also could hit data caps with your service provider if you are streaming Ultra HD too often.

Is Disney+ worth a subscription?

It doesn’t matter what angle you approach this from. From a content standpoint, the library is already worth $7-a-month, for adults and kids. From a technical standpoint, you are paying less than half of what Netflix charges monthly for four simultaneous streams and Ultra HD quality streaming. From an accessibility standpoint, it’s on the majority of the major streaming platforms on day one. The full list includes Roku, Fire TV, Apple TV, Android, iOS, Chromecast, Xbox One, PlayStation 4, Samsung Smart TVs and LG Smart TVs. 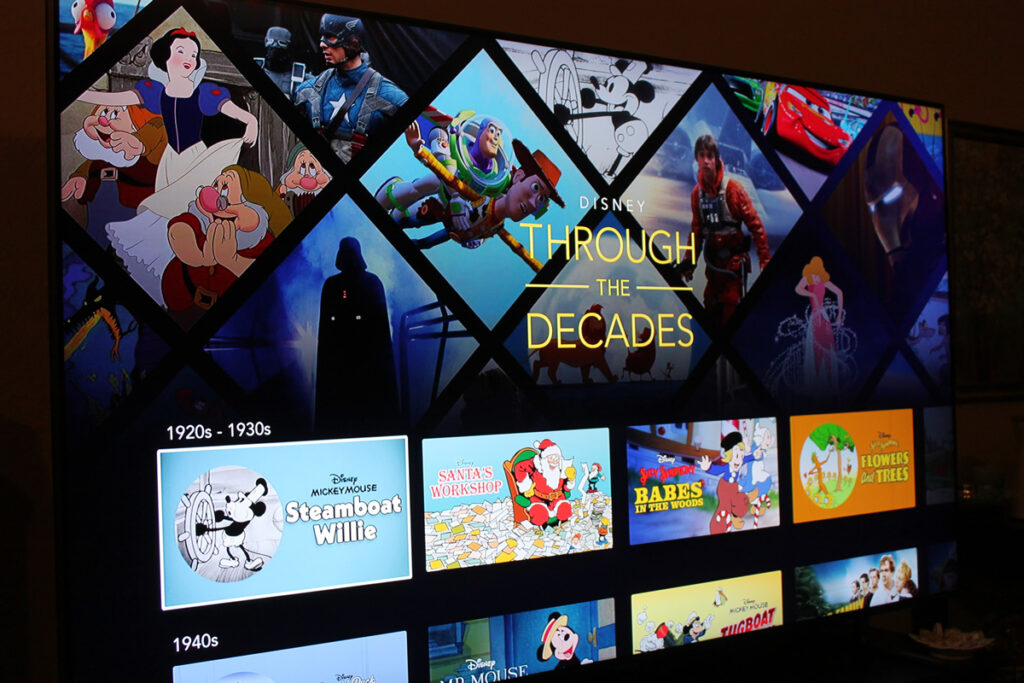 Just FYI, Disney is also offering a packaged deal with Hulu and ESPN+ for $13-a-month. There are downsides though. That is the version of Hulu with ads & it’s limited to a single stream. The ESPN+ service is limited to two streams in the bundle, rather than four in the standalone. But you will be able to stream from all 3 services at the same time.

In addition, be on the lookout for deals that package Disney+ with services. For instance, Verizon is offering a year of Fios Gigabit Internet for $70 a month & it includes Disney+ along with the $100 Visa gift card.

Let us know what you think of the Disney+ service in the comments below.