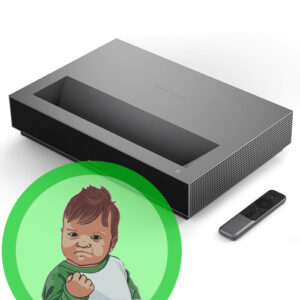 Looking to upgrade that older 1080p projector with a new 4K model? Perhaps you are building a movie room in your basement and need something to really impress your guests? Does the idea of installing a projector seem too complicated? Meet the WeMax Nova 4K projector, an ultra short throw projector that can display a sharp 4K image 80 to 150-inches in size and can be installed in minutes.

Compact, compact, compact. The Nova measures roughly 18 inches long, 12 inches wide and just under 4 inches tall. It fits in nicely with all your other set-top boxes in the home theater setup. Along the sides, you will finds scroll dials to adjust the feet on the front of the projector, ideal if you need to project at an angle. The shape of the projector reminds me a bit of the final revision of the Xbox One hardware.

On the top, you will find a manual power button and the laser projection system (ALPD). The 2100 ANSI lumen bulb in the projector is rated for 25,000 hours. There’ also a sensor system built into the top of the system, specifically designed to shut down the last when detecting any movement. This is designed as a safety feature to avoid damaging eyes.

On the front of the Nova, a grill hides the built-in speaker system. Using a Dolby Audio processor (and DTS decoder), it’s higher end than the majority of speakers in television, but not quite a mid-range sound bar. There are two full range 10W drivers and two 5W tweeters. On the bottom, you will find mounting holes for ceiling mounting via a bracket (not required).

On the back, you will find the power connection port (one power cord, no brick required), three HDMI 2.0 ports (included 1 ARC on HDMI 3), 1 3.5mm composite video port, 1 RJ-45 Ethernet port (if you prefer over Wi-Fi), 1 3.5mm headphone jack, and 1 Digital S/PDIF optical jack. There’ also a USB 2.0 port on the rear as well as 1 USB port the side of the Nova, ideal for plugging in an expansion hard drive.

Speaking of storage, the Nova comes with a 32GB storage drive, which has about 26GB free after the initial updates. Other hardware stats include 2GB of RAM (ideal for smooth Android usage), Bluetooth 4.1 connectivity and Wi-Fi connectivity for both 2.4GHz and 5GHz systems.

The Nova is no different. I placed it on my TV stand, plugged it in and had a massive image just moments after unpacking. That being said, Wemax does include options in the menu for other placements, including a ceiling mount. But the vast majority of users will likely just place it directly in front of the wall.

The initial setup runs you through linking the included remote (requires two AAA batteries not included) via Bluetooth (no line of sight required), connecting to your home’s Wi-Fi network and downloading the latest updates for Android. My update was less than a gig of data. If you have the option, I recommend using the Ethernet port on the back of the projector and avoiding any possible issues with Android wireless connectivity.

If you like tweaking the image quality, there are a number of preset viewing modes like Movie, Vivid, and Sports as well as a custom mode to manually adjust brightness, contrast, saturation, sharpness, hue, and color temperature. It also has a digital noise reduction option. Incidentally, if you connect a game console like the PS5 or a computer, the Nova has a Game mode (with faster response time) and a monitor mode.

Setting up Android 9.0 is quite simple as well. After the updates, you have the option of installing additional apps. The main Android menu will always be your starting point when turning on the projector.

One annoyance, the hardware doesn’t remember if you were watching something via a HDMI port the last time it was active. You always have to go to the inputs section at the top of the Android screen, then select your HDMI port in the settings. Many new TVs will remember the last HDMI port that was active or even auto-load to a newly turned on device. A dedicated input button on the remote would have helped here.

As mentioned earlier, the Nova is rated 2100 ANSI lumens. If you are unfamiliar with the term, ANSI is a measurement of the overall amount of light output from a projector. The higher the value, the brighter the picture.

The picture quality is absolutely stunning, especially in a low light room. But even in a medium light room, you are still going to have solid image quality. Ideally, you want to display this image on an ALR projection screen. You can typically find those screens online, ranging from $250 up to $2,000. Keep in mind this is DLP tech, if you are sensitive to the rainbow effect. I didn’t have any issues though.

In complete darkness with projection screen, this projector is really going to perform well during dark scenes in films. I tried out some scenes from Pan’s Labyrinth, Gravity, and Dunkirk, all which this projector nailed in a completely dark room. I also did a few tests on some of my favorite colorful films (Grand Budapest Hotel, La La Land, Coraline) and the color accuracy was 100% there. And I was using the standard movie mode picture setting (no additional tweaking). HDR10 content looked fantastic! (Does not support HLG HDR or 3D content)

Regarding Android performance, I’m happy to report the interface is snappy and responsive, much like high end 4K televisions from Samsung or Sony. It’s super easy to jump from app to app, download new apps or simply move around in the settings. I’ve tested too many devices in which the processor / RAM slow down Android to the point of being borderline unusable. This is not the case with the Nova. Voice commands work well using the included remote as well.

Regarding gaming, this is a fantastic projector for casual gaming, but not necessarily for competitive gaming. The gaming mode reduces response time to about 40ms, which is fantastic for racing games like Forza or Mario Kart or adventure games, RPGs, and other types of single player games. And a 150-inch screen is pretty epic for split-screen games with friends.

However, it’s not ideal for twitchy, first-person multiplayer shooters when cutting down response time can be the difference between winning or losing a match. It’s also not necessarily ideal for the PS5 / Xbox Series X due to the lack of HDMI 2.1 / 120Hz mode. You would be better off on an LG OLED to get those features.

As for the sound performance, connecting to an external set of speakers or soundbar via HDMI ARC is still the superior option. While the speakers are better than the vast majority of televisions, it certainly doesn’t compare to a full surround sound system. However, I did like the option to turn off the projector and continue to use the sound system as a Bluetooth speaker. You can find this option in the menu when turning off the Nova.

I tested both movies / TV shows on the internal hard drive as well as plugging in a 64GB thumb drive in the side USB port. No issues with either option and VLC was able to handle any file I threw at it. Another use for USB, a mouse & keyboard. You can simply plug in a USB BT dongle to one of the ports and you are ready to roll. This is ideal for using Android to browse the web or make faster YouTube searches by simply typing in titles of videos.

One clear limitation to Android 9.0 is the absence of Netflix. However, any app you can’t get on Android can easily be found on a streaming stick (Fire TV, Roku) or any gaming console. And with 3 HDMI ports, you will likely have room.

I did try testing out some streams of 4K content on YouTube, Netflix and a few other streaming networks using a PS5. It just works, no issues with Wi-Fi connectivity. Plus you have the option of a hardwired Ethernet. I had no issues using Chromecast for streaming and it was just as fast as a current gen Samsung / Sony TV. I also tested out a couple UHD discs using a Sony UBP-X800M2 and had no issues with HDR10 content.

Regarding fan noise, it’s minimal, even after extended use. You may notice it during low volume quiet scenes in movies and TV shows, but it’s much quieter than many traditional projectors I’ve tried. Additionally, you could easily add some sound dampening material in the vicinity of the device to cut down on fan noise (as long as you have proper ventilation).

If you are in the market for a short throw laser projector, the Wemax Nova should be at the top of your list. It’s dead simple to setup, it’s bright enough to use in a low-to-medium light room, the 4K image quality is fantastic (especially HDR10 content), the Android platform is responsive, and it has more than enough tweaking options for the average user.

At a $2,700 MSRP, this certainly isn’t a casual purchase. That being said, we’ve seen the price drop as low as $1,900 using coupons. Hypothetically, if you got that sales price, you could pick up a $500 screen and have a stellar home theater setup (at least the video part) that would impress pretty much any guest.