The demise of Flappy Bird…Here’s how you can keep playing!

If you haven’t heard, the insanely popular (and difficult) iPhone and Android mobile game Flappy Bird has been removed from both the App Store and Google Play store as of yesterday. The developer of the game, Nguyen Ha Dong, told his 138K Twitter followers that he couldn’t handle the success of the game and hated that it ruined his simple lifestyle. According to many reports on Dong’s success, he was making as much as $50,000 a day in advertising revenue.

However, there were a number of contributing factors that led to the downfall of that little pixelated bird. For instance: 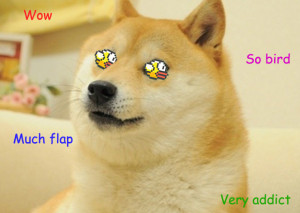 We suppose Dong will spend his nights crying about the demise of Flappy Bird and wipe away his tears with $100 bills. However, you don’t have to stop playing. While we certainly don’t recommend purchasing an iPhone 5S with Flappy Bird installed for $2,000 on eBay, there are a few other alternatives looking to take the place of the Flapster. They include: