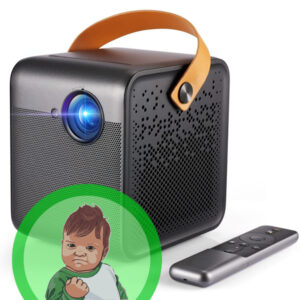 In a world with near limitless entertainment options as well as screens in our home to display that entertainment, there are products that are designed to take a bit of that comfort with us on the road. WEMAX is attempting to do just that with the compact, 1080p DICE projector; a device that can be used without a power source (after fully charged) in any remote location.

Imagine going camping, throwing up a sheet over a couple trees and streaming your favorite movie (up to 120 inches in size) simply by connecting the projector to your phone (when setup as a mobile hotspot). Or perhaps you want to show old home movies at a relative’s house that has older televisions and video tech. At less than 5 pounds, this projector is easy to pack in a suitcase and take with you on the go.

It also feels like a great option in the business space as well. I could imagine that someone like an event planner would love to have a bright, compact projector to display video / photos at a wedding or similar event. Flipping back to consumers, it also feels great for anyone that wants to game with friends and needs a huge screen to display their PS5 / Series X games.

In the box, you will find the projector itself (measuring roughly 6″ by 6″ by 5″), the power cord w/ power brick, the remote control (the two required AAA batteries are not included), a quick start guide and a cloth to wipe down the lens. On the back of the projector, you will find the DC in for power, a 3.5mm headphones jack (or to connect an external speaker), a USB 2.0 port and a HDMI input.

One additional feature that I liked, there’s a threaded screw hole on the bottom designed for mounting on a tripod; a great idea for gaining height when projecting. There’s also a brown strap on the top that lets you easily relocate the projector without having to pick up the hardware (which is ideal when running for hours due to heat).

I love the industrial, metal design of the projector. It’s just plain solid. There’s tons of heat dissipation areas in the form of miniature holes along the sides and back. There are four rubber feet on the bottom to provide a nice cushion when you set it down. The strap on the top is attached via large, metal rivets on the sides. It’s a sleek looking machine and, amazingly, not much larger than a smart speaker like the Amazon Echo.

If you have ever been through the setup process for an Android (version 9) device, you are going to be right at home setting up the Dice. The actual initial setup process took about 10 minutes, much of that related to downloading and installing the initial software update.

I was impressed with the auto focus function at start, an ideal feature for a projector that’s intended to go mobile and travel with you. You can also project from an angle up to 45 degrees off center, using the 4-point keystone correction tool (automatic correction). I tested it a few times and never had an issue getting a clear, focused image that displayed natural images.

You will have to pair the remote with the projector, but it’s a quick process that had me up and running in 30 seconds. Beyond that, you will need to install common entertainment apps within the Google interface like HBO Max, Hulu, Amazon Prime Video, Disney+ etc…

Fair warning, Netflix is not included as an option (nor can it be cast via Chromecast), but nothing is stopping you from plugging a $25 Roku or Fire TV stick into the HDMI port to gain access to Netflix. That’s also a great solution if you simply dislike the Android interface (or are more comfortable on another platform).

I did have a minor issue with Android not bring able to connect to my home Wi-Fi network during the initial setup process, but once I entered the login details and skipped past the “Can’t connect” screen, Android auto-logged me into the network. I haven’t had a problem since. Again, you won’t have this problem if using a separate streaming stick.

The DICE is rated 700 ANSI lumens. If you are unfamiliar with the term, ANSI is a measurement of the overall amount of light output from a projector. The higher the value, the brighter the picture. For the size of this projector and the price point, it’s extremely competitive compared to alternatives like the Nebula. Lots of compact, travel projectors are in the 200 to 500 ANSI range.

For real world applications, this means you have more flexibility in when you can use the projector. For instance, if you are showing a movie outside, you could start the film as the sun was setting rather than having to wait for complete darkness. That being said, 700 ANSI lumens still isn’t enough for medium light, so you will still have to close the blinds / curtains if using in a home or wait for dusk.

On picture quality, I was thoroughly impressed with the DLP tech. It’s not 4K, but 1080p looks sharp and clear. The color is excellent, likely due to the brightness levels; extremely accurate compared to my Samsung Q80. I did a few tests on some of my favorite colorful films (Grand Budapest Hotel, La La Land, Coraline) and the color accuracy was absolutely there. Of course, you have to make sure you are projecting on a white background. A projector screen is ideal, but a white wall certainly works in a pinch.

While I think the auto-keystone function and auto-focusing function is perfect for the average user, anyone that wanted a deep level of manual control will be disappointed. I don’t think that will be a huge complaint from most users, but folks that like to get into slight, technical corrections will be disappointed.

The speaker quality is certainly better than listening to audio via your smartphone speakers, but it’s not ideal if you have a large group. It’s fine for dialogue, but sweeping musical numbers or loud action scenes are going push the built-in speaker to it’s limits. You are much better off connecting an external speaker via the 3.5mm jack or using Bluetooth.

I tested the 16,000 mAh battery from a full charge to losing power completely and the manufacturer’s estimate was dead on. It lasted roughly 3 hours and 7 minutes of constant video projection before turning off the 1st time and 3 hours and 13 minutes the 2nd time; plenty of time for most movies (outside of a Lord of the Rings marathon)

I tested the device charging feature, via the USB port. It just works, plug and play. Granted, you will drain the battery and lose video projection time, but it’s an awesome feature if you are desperate for a quick charge (or are perhaps need juice while streaming a TV show or movie from your device). No USB-C here charging, of course.

I tested loading up a bunch of movies on a 64GB thumb drive, popped that into the USB port, and queued those up using VLC (available on the Google Play store). No issues at all. I’d also recommend that option for anyone that’s going to a truly remote location where Wi-Fi or cellular service will be spotty.

I tested Chromecast streaming using multiple apps. It works well, but be aware it’s going to take slightly longer to get going when starting a video. I was noticing roughly an additional 15-20 seconds waiting for videos to start compared to streaming to a separate Chromecast device or streaming to a Sony TV using Android. After it gets going, it’s an identical experience to the those other devices.

Personally, I found the Android 9.0 interface to be hit or miss. YouTube worked perfectly, for instance. Loading up other apps was a bit of a chore. Disney+ was solid, Hulu was lagging, Peacock was super slow. Google Voice Assistant works just fine (there’s a button on the remote for it).

As mentioned previously, you certainly aren’t locked into Android. I tried both a Roku stick and a Fire TV stick via the HDMI port, each worked like a charm. You will have to remember to bring that extra remote control when traveling though.

If you are looking for a compact, bright projector for travel, the WEMAX DICE should be at the top of your shopping list. It’s a user friendly projector that’s easy to get up and running, plays pretty much anything you can throw at it, gives you maximum flexibility in where you can use it and provides a greater level of brightness than competitors at this price point.

If you are going to take this device on the go, you may want to consider investing in a small, hard-shell case, like Pelican cases with foam inserts to project the projector lens. There are cheaper options from Amazon Basics as well.

You can read more reviews of the WEMAX DICE projector here on Amazon. The MSRP for the DICE is $700, but you can normally find sales in the $500 – $600 range. The last deal post on the DICE projector on Ben’s Bargains was $403.