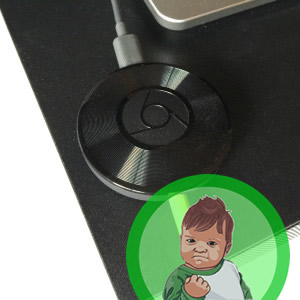 The Bluetooth audio receiver has been a little cottage industry in recent years, and I’ve reviewed my share of them (here, here and here). Bluetooth receivers are a cheap way to wirelessly stream music and audio from your smartphone to your existing stereo or powered speakers. On the other end of the spectrum, Sonos—and to a smaller degree, Apple Airplay—offer higher quality but more expensive options to stream music in your home.

Google’s new Chromecast Audio sits somewhere in between those options, but closer in spirit and price point to the ubiquitous Bluetooth receiver. Priced at $35, it’s ironically higher than most Bluetooth receivers, considering that Google’s Chromecast streaming player (also $35) is considered the budget option in its product category.

But let’s be clear: the Chromecast Audio is way better than any and all the Bluetooth receivers out there. I think it will become the standard of wireless home audio, especially when its future support of multi-room audio arrives sometime down the line.  There is one small hitch to world domination that lies outside of Google’s control: Apple Music doesn’t work with the Chromecast Audio.

That’s right. Spotify, Google Music, Pandora and most of the major music streaming apps work with the Chromecast Audio…except Apple Music (and also Amazon Music, but probably most people don’t care about that). But this could change, as we saw back in June when Apple announced cross-platform support (Android, gasp!) for Apple Music. Just don’t hold your breath. 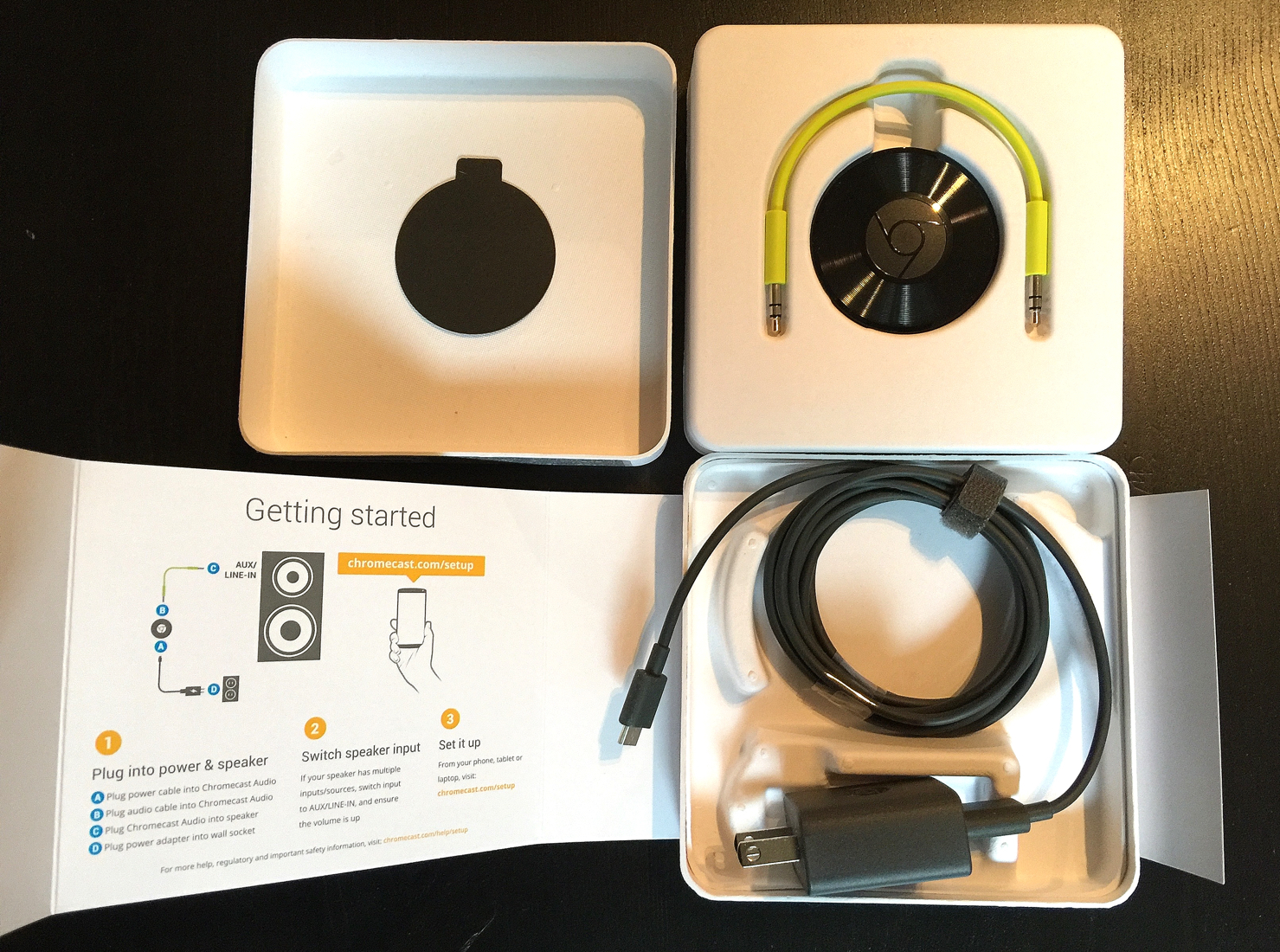 The Chromecast Audio comes in the same size box as the new Chromecast and also shares the new puck-shaped form factor. It measures about 2 inches in diameter and has narrow circular grooves on the top, resembling an old-school vinyl record. It’s only available in black, unlike the second gen Chromecast which launched with three color options. 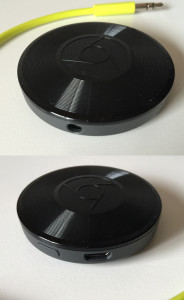 In the box, you’ll also find a short yellow 3.5mm cable (just under 6 inches), the USB power cable and small power adapter. Or you can bring your own RCA Y-cable or optical cable (Toslink to 3.5mm mini Toslink).

The exterior of the Chromecast Audio has a small reset button and two ports: the micro USB port and the 3.5mm jack with analog and digital audio output.

Setup takes anywhere from 5 to 15 minutes depending on your level of technical expertise. But not to worry: it’s easy (and even easier if you’ve already set up a regular Chromecast).

You need to get the free Chromecast app on an Android or iOS phone or tablet. On a Windows PC, you can go to https://www.chromecast.com/setup via the Chrome browser and download the Chromecast app. Windows phones and Macs are currently not supported.

It sounded pretty good right out of the gate. The audio quality immediately reminded me of AirPlay but with less dropouts. Welcome news: Chromecast Audio supports up to 24-bit/96kHz audio (DVD quality). 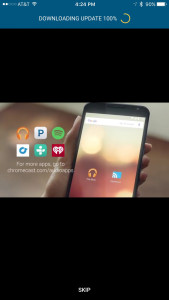 The Chromecast Audio streams audio over dual-band 802.11ac (2.5GHz/5GHz) Wi-Fi. The bandwidth and range is far superior to Bluetooth and it’s less susceptible to interference.

That said, there can be dropouts when you have heavy network traffic. I tested music streaming while sending files to the cloud, downloading a big file and backing up to a local network, and the audio dropped out for several seconds. It was an extreme test case, but something to keep in mind.

Of course, it’s great for home audio use because, unlike Bluetooth streaming, it won’t interrupt your streaming for phone calls,  text sounds and other system audio.

From the Chromecast app, you have the option of toggling High Dynamic Range for analog connections to hi-fi speakers and audio receivers. If you’re using an optical connection, HDR is the only setting.

The Chromecast app on Android is currently packed with a lot more features compared to the iOS version (although those are “coming soon”). From the Android Chromecast app, you can find content (“What’s On”) and apps (“Get Apps) that will utilize your new Chromecast Audio.  (On iOS you basically see a placeholder for your device.) 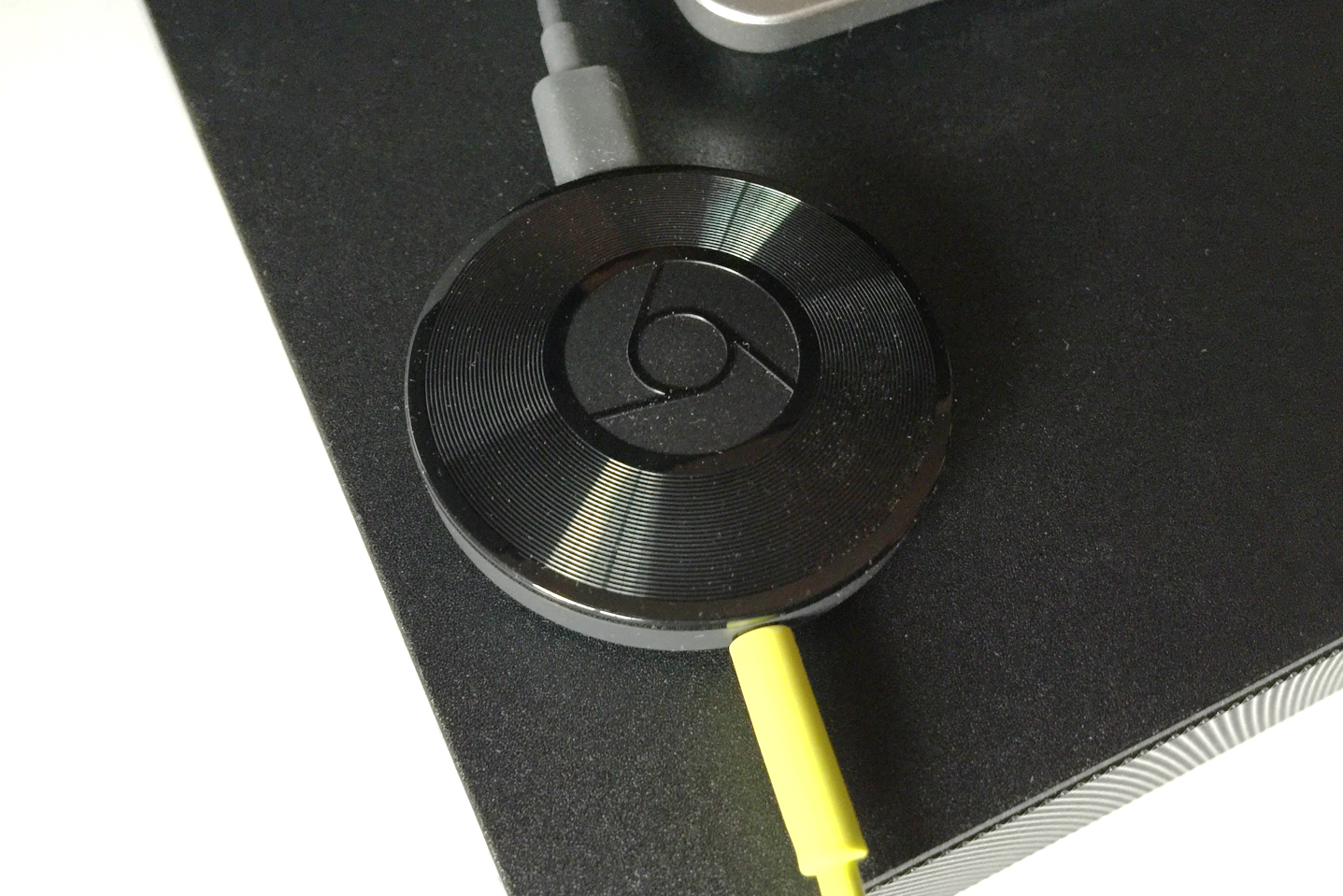 For Android and iOS users, the Chromecast Audio is a sleek alternative to Bluetooth receivers that should only get better with more apps (and a better iOS Chromecast app), multi-room audio capabilities and hopefully Apple Music support.

It’s good if you plan to have your devices farther away from the speakers and/or if you need to make use of the guest mode where anyone can easily cast to your Chromecast Audio with no pairing required. With its support for higher quality audio, the Chromecast Audio is a better choice for discerning audiophiles.

And at $35, the Chromecast Audio won’t set you back much more than a typical Bluetooth audio receiver, but it has the potential to do a lot more.

Keep your old Bluetooth audio receiver for the car.