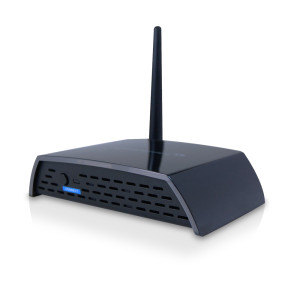 Two months ago, I reviewed two Bluetooth speaker adapters from Logitech (8/10) and HomeSpot (7/10). I gave the slight edge to the Logitech for a more polished product. They are both popular products as consumers have begun to prefer Bluetooth-enabled speakers and the convenience of streaming  music from their portable devices.

However, both the Logitech and HomeSpot suffered from one similar weakness: limited range.

The BTSA1 features Bluetooth 3.0 (A2DP)  with aptX, a proprietary codec intended to mitigate the lossy sound quality that Bluetooth is known for. The catch is, your device has to support aptX, and currently iPhones do not support it, although many newer Android phones do, including the Samsung Galaxy S3 and S4, Samsung Note and the HTC One. Apple has a vested interest in its proprietary Airplay which is considered to have better sound quality, and I’d agree that—under the right conditions—Airplay’s audio quality is superior to most Bluetooth applications.

But Bluetooth wins hand-down in convenience and universality, and most of us won’t care about minimal differences in sound quality, especially when we’re already playing compressed music files from mobile devices and PCs. 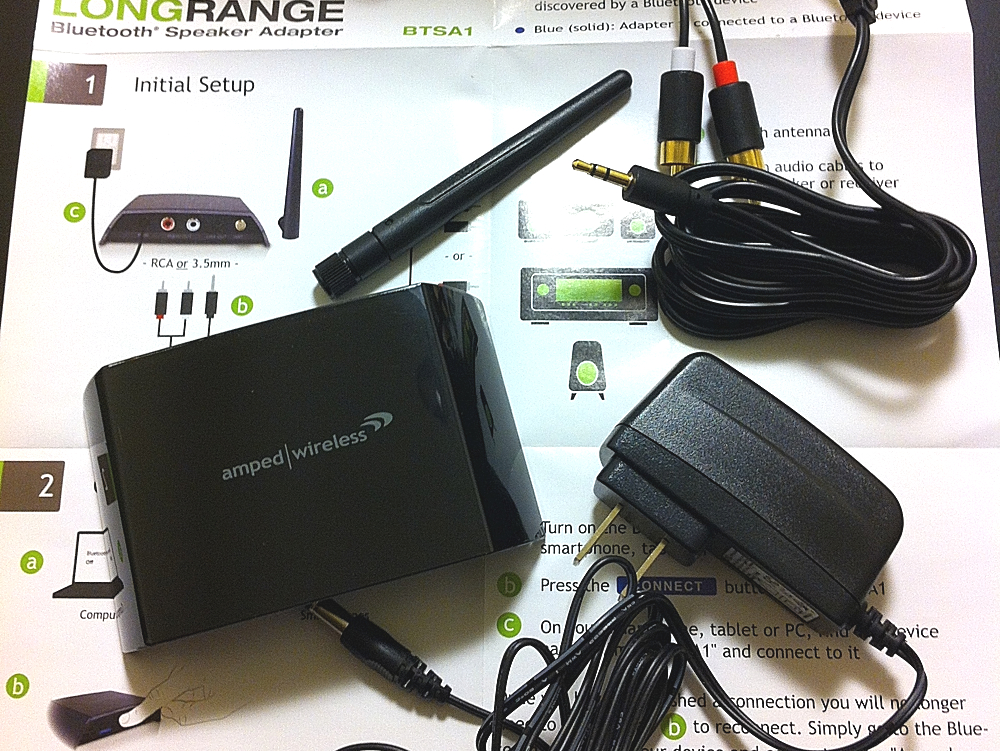 Inside the package, you’ll find the Bluetooth adapter, detachable, screw-on swivel antenna, 3.5mm to RCA Y-cable and power adapter. In addition to the one-sheet user guide, you receive a code good for two months of the Rhapsody streaming music service.

The unit has a glossy black finish. With its sloped edges and 3-inch antenna, the BTSA1 resembles a miniature router, but it should fit in with your typical black home theater equipment. It’s 4 inches wide, 2.75 inches deep and 1 inch tall (sans antenna), similar in size and weight to the Logitech adapter.  Also like the Logitech, the BTSA1 has both RCA and 3.5mm outputs. (There’s no optical output.)

Overall, the Amped Wireless adapter has an unobtrusive and polished appearance. The solid blue paired light is not distracting, although I generally prefer white or amber as more relaxing indicator lights.

The BTSA1 performed very well in my tests.  Within the standard 33-ft. range I experienced fewer dropouts overall than the Logitech and HomeSpot adapters. In some sessions, I had no dropouts at all. Still, the difference is minimal and totally dependent on many variables.

I found the sound quality to be comparable to the Logitech Adapter. Not necessarily as warm, but still a pleasing sound. A lot of the sound quality is dependent on the music source, encoding and the devices themselves, but the BTSA1 does seem to get out of the way and do what it’s supposed to do, which is create a strong wireless signal.

That’s where the Amped Wireless adapter shine. In my tests, I found the outer limits of the range to be around 40 feet, including two or three walls in between. As usual, YMMV. Nonetheless, its range is noticeably superior to both the Logitech and HomeSpot adapters.

Within 40 feet, the connection was always strong as I moved my Bluetooth device into separate rooms, behind doors, walls and even in the basement through concrete. Outside this range, at distances up to 50 feet, the sound would crackle but I could still get a signal.

The Amped Wireless Bluetooth Speaker Adapter is typically selling for around $70 online. That’s about $30 more than the popular Logitech adapter and twice as much as the HomeSpot, both of which performed reasonably well.

That said, I think consumers looking to place their speakers in a separate room from their music source will immediately benefit from this purchase.  The BTSA1 is just a lot more reliable Bluetooth speaker adapter, particularly when you get farther away, in the 10- to 35-ft. range.

If you’re planning on keeping your music device relatively close to the adapter, you may want to look into the less expensive alternatives. And although I’ve yet to find a flawless solution for Bluetooth audio without any dropouts or interference, the Amped Wireless Bluetooth adapter has about as good a signal as you’ll get with this technology.