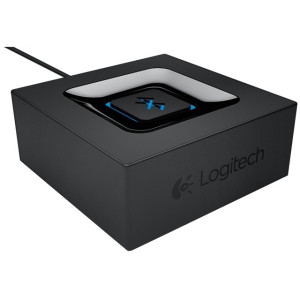 This year I’ve reviewed Bluetooth speaker adapters from Logitech (8/10), HomeSpot (7/10) and Amped Wireless (9/10). Each one has its merits, although the Logitech adapter has certainly been one of the most popular entries in this burgeoning product category since its debut back in 2011.

Three years later, Logitech has released the followup to that successful Bluetooth speaker adapter and in so doing, addressed the issues that many users shared as well as tweaked and improved other aspects of the product.

The big selling point for Bluetooth speaker adapters—for those of you who are new to the category—is that you can stream audio from a Bluetooth device to just about any pair of powered speakers or speakers hooked up to a receiver without having to buy  a new Bluetooth-enabled sound system. For the most part, Bluetooth speaker adapters are comparatively cheap, and the new, 2014 Logitech Bluetooth Audio Adapter (980-000910) is no exception. In fact, at a street price of $40, it costs about the same (or even less) than the previous model.

Like other Bluetooth adapters, setup was extremely fast. Logitech kept the pairing button on the top of the unit—which was already a good design decision—but made it bigger and flatter with more of a tactile response when clicked. This is a small but welcome improvement. You also get confirmation tone when you a pair or unpair a device. (The adapter will appear as “Logitech BT Adapter” when you are pairing.)

The new adapter is much smaller than the previous model. It measures a diminutive 2″ x 2″ x 7/8″ versus the 3″ x 3″ x 1″ dimensions of the original. Although it’s tiny and lightweight (about an ounce), the rubber bottom surface prevents it from sliding around when you’re plugging and unplugging cables.

The status light is now a subdued blue instead of green/red, and because the light is located on the underside of the unit, it’s not particularly distracting. Of course, the adapter is so small, you can easily hide it in your entertainment system.

Now let’s take a look at the two major upgrades of the 2014 model: simultaneous connections and longer range. 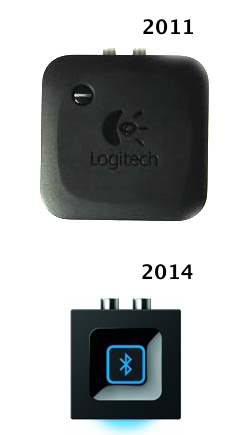 Logitech’s new Bluetooth audio adapter touts the use of MultiPoint Bluetooth Technology, which allows users to simultaneously connect two devices to it. MultiPoint is widely used on newer Bluetooth headsets and other Bluetooth devices, and it’s a convenience rather than anything revolutionary. Nonetheless, MultiPoint puts Bluetooth-enabled speakers on closer footing with Airplay which already allows multiple devices to be connected at the same time.

Although the original Logitech Bluetooth speaker adapter lacked MultiPoint, it was hardly alone among its peers. Still, if you wanted to play audio from a second paired device, you had to disconnect the first device then connect the second.

Multipoint removes those extra steps and allows you to keep two paired devices connected simultaneously. You still have to pause or stop the audio on the first device before you can play the audio on the second, but you don’t have to fiddle around with the Bluetooth connections.

For me, the biggest issue with the MultiPoint implementation is the brief gap when you stop the audio from the first device and press play on the second device. In my tests, I found that after I stopped the first device, there was a 3- to 5-second delay from the time I pressed play on the second device and the sound coming out of the connected speaker.

It appears this lag is from the first device still sending a signal to the adapter even though audio has stopped.  So I waited a longer period of time from hitting stop on the first device before hitting play on the second—about 10 to 15 seconds—and there was no longer any lag.

In most situations, you probably won’t be switching between devices that quickly, but it’s something to keep in mind. The lag may also be more dependent on what version of Bluetooth your devices uses, e.g. BT 2.1 vs. BT 4.1, etc.

Logitech’s second major upgrade to the new model is a longer range — the box says the range is up to 50 feet (or 15 meters), within line of sight. The range definitely extends beyond the standard 33 feet, but for practical purposes, I found that the audio was inconsistent beyond 40 feet, similar to the larger Amped Wireless BTSA1 adapter which even has an external antenna.

You may get a strong signal at those longer distances, but walls, floors and other obstructions are typically going to be a factor in a typical home layout.

Nonetheless, I experienced fewer dropouts at closer distances than the previous Logitech model, and the reliability was comparable to the Amped Wireless adapter. Three years have clearly given Logitech’s engineers a chance to improve the signal because overall the sound was very clean.

The new Logitech Bluetooth adapter possessed a warm tone and wide soundstage, qualities that I liked in the previous 2011 model. While some listeners may prefer no digital processing at all, I think it’s preferable for the type of compressed audio you will hear in streaming applications.

Logitech’s new Bluetooth adapter is about the best product you can find right now in this category. The only minor faults would be nitpicks: the lack of NFC connectivity and the audio lag when switching between the two connected Bluetooth devices.

(For those of you looking for applications outside the home, I will be reviewing a Bluetooth speaker adapter you can use in your car in the next edition of this series.)