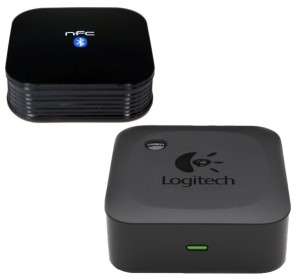 As many of us have moved our entire music collections onto mobile devices and laptops or increasingly use streaming music services like Pandora or Spotify, we’ve also embraced the convenience of wireless speaker systems.

Thanks to best-selling products like JAMBOX and the Beats Pill, Bluetooth speakers have become the wireless delivery technology of choice for music listeners. A distant second and third would be Apple’s proprietary AirPlay and DLNA (i.e. AirPlay for non-Apple products), both of which use existing Wi-Fi networks. AirPlay promises higher fidelity audio if you’re playing uncompressed CD-quality files, which most people aren’t doing anymore. Bluetooth may not be the best quality, but like VHS in the VHS-Betamax war, universality wins out and Bluetooth is pretty much on every mobile device.

Who Needs a Bluetooth Speaker Adapter?

The Bluetooth speaker adapter is very simple: it’s a box that wirelessly streams stereo audio from a Bluetooth-enabled device—like a mobile phone or tablet—to a powered speaker or receiver via an RCA or 3.5mm cable.

If you’ve got powered speakers or an old stereo receiver or maybe a speaker dock that no longer fits your new smartphone, then you’ll want to look into getting a Bluetooth speaker adapter. It’s a lot cheaper than buying a new home theater receiver with built-in Bluetooth.

For this review, I’ve compared two of the most popular Bluetooth speaker adapters on the market: the Logitech Wireless Speaker Adapter and the HomeSpot NFC-enabled Bluetooth Audio Receiver. Both are very affordable and can typically be found between $25 to $35 online.

One caveat: if the quality of sound is of utmost and only concern to you, stop reading here. A wired connection is always the way to go.

The HomeSpot Bluetooth adapter (under $30 at Amazon) is a tiny glossy black box measuring 2.4-inches square and weighing about an ounce. Its light weight is a drawback because the two cables connected to the back can actually lift the box up on one side. And although it’s really small, keep in mind you’re still adding two more cables to what’s probably an already existing cable clutter behind your stereo.

The adapter comes in a “frustration-free” reusable plastic zipper bag, which is handy for transporting it around for portable use or just storing unused cables. The contents also include a 3-foot 3.5mm stereo cable, a 3-foot 3.5mm to RCA Y-cable and a 6-foot micro-USB to USB cable with power adapter. 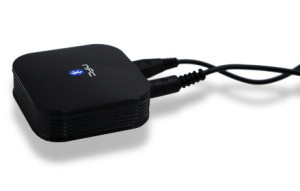 The HomeSpot is so easy to set up, the one-page instruction sheet is almost unnecessary. There’s only audio output on the back: a 3.5mm output jack. The pairing process took a painless 5 to 10 seconds each with two different iOS devices and a laptop. You simply press the little connect button on the back, have your phone or Bluetooth media player “discover” the adapter (listed as “GT BT-Receiver”), and you’re done. When the little green light on the front panel glows slowly, the pairing is complete.

The HomeSpot can only pair with one device at a time, so you have to unpair or disconnect the first device before pairing the second. It’s a small inconvenience but nothing more. The HomeSpot automatically goes into discoverable mode whenever it’s not paired and you don’t have to press the connect button again.  It can store up to 8 paired devices so the next time you pair the same device, you just reconnect without having to go through a discovery process. In contrast, AirPlay allows a second device to connect without having to disconnect the first device. That is a limitation of Bluetooth.

As for sound quality, the processing on the HomeSpot renders a very flat sound. I tested the HomeSpot on a Philips Airplay Speaker via the auxiliary input and it lacked the depth and soundstage that the AirPlay connection would produce. I also tested the HomeSpot with another powered speaker via RCA inputs, and it also had the same flat tone. While a few listeners may prefer this type of sound as it usually indicates less digital processing, for most it’s less appealing to hear compressed MP3 music with little to no processing.

Because it’s a Bluetooth connection, the HomeSpot will reproduce all other sounds from your device, including button taps and game sound effects. Incoming calls or text messages will temporarily pause / lower the volume of the sound, which some may not find ideal. (This flexibility also means that you can wirelessly listen to Spotify’s desktop application, which currently does not support Airplay.)

In contrast to an average Wi-Fi network, Bluetooth has a limited 30-foot standard range. While the strength of the HomeSpot falls into that range,  I heard very spotty audio when multiple walls were put in between the adapter and the audio source. In the 25 to 30 foot range with a straight line of sight, the audio dropped out briefly when I walked in front of the phone. Under 20 feet, there were no issues.

The Logitech Wireless Speaker Adapter ($35 to $40 on Amazon) is a bit more polished product, as you might expect. It has more heft than the HomeSpot—thus staying flat to the surface with cables plugged in—and slides around less due to larger rubber feet. It’s also bigger, measuring about 3-inches square, while still remaining unobtrusive. The box has a matte black finish with a fingertip-sized connect/pairing button on the top which is more conveniently located than the little button on the back of the HomeSpot. 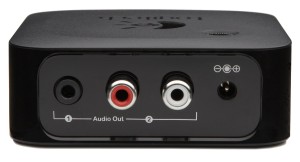 It comes in a “frustration-lite” blister pack with a perforated back, thankfully avoiding the need to use scissors to open it. Inside the package is a 3 foot RCA Y-cable and a standard wired power adapter. While the Logitech has less pack-ins, it does have a stereo RCA output in addition to a 3.5mm jack, an improvement over the HomeSpot’s single audio output.

Pairing was also very easy and error-free in my three test cases (listed as “Logitech Adapter”), but unlike the HomeSpot, I had to press the connect button each time I needed to connect a new device or reconnect an old one. The front panel LED bar is solid red when powered, flashing green in pairing mode, and solid green when paired. The Logitech does not support NFC.

I experienced a couple brief dropouts with the Logitech when my phone was a mere 6 feet away from the adapter. However, with all wireless technologies, occasional dropouts are unavoidable. As with the HomeSpot, incoming calls and text messages caused a short blip in the audio.

I felt the Logitech’s sound processing was far more preferable for compressed music, producing warmth, depth and a wide soundstage that was similar to my Philips AirPlay connection. YMMV, but if you’re looking for a more pleasing and less compressed sound, the Logitech would be my pick.

The signal on the Logitech was pretty strong between 20 to 25 feet, even with a closed door, wall or cabinets in the way, and it experienced less dropouts than the HomeSpot at those distances. However, once a couple more walls and doors came between the phone and the Logitech, the audio quickly turned very choppy.

If you’re fine with the lossy compression of MP3 audio, then you’re probably fine with streaming music over Bluetooth. With its relatively low price, compatibility with most mobile devices and the convenience of wireless audio, the Bluetooth speaker adapter is a great little gadget to have.

The HomeSpot and Logitech adapters are very similar, so the choice comes down to your needs. I picked the Logitech because of a more appealing (processed) sound and RCA outputs, but if you want NFC support or prefer a “flat” sound, then the HomeSpot is a better choice.

Neither adapter has an optical out, so if you’re looking for that type of connection, I’d recommend looking at the more expensive Belkin Bluetooth HD Music Receiver ($50 at Amazon).