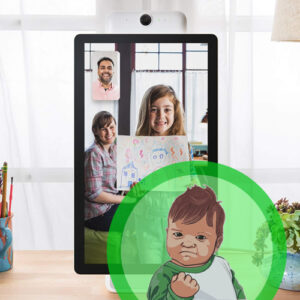 It’s been a little over half a year since Facebook’s Portal devices hit the smart home device market. The initial launch must have been a success for the company since it’s planning to release new versions of the Portal during Fall / Winter 2019, perhaps smaller screen options to compete with the Echo Show 5.

At the moment, there’s two hardware options in the Portal lineup, the 10-inch Portal and the 15-inch Portal+. The first has a fixed 720p screen and the latter has a 1080p flatscreen on a 90 degree swivel (landscape or portrait, just like a smartphone or tablet).

The touchpad is very responsive on the 15-inch screen and the touch interfaces on the volume controls at the top of the device are intuitive. You can tap to the left or right of the camera to decrease or increase the volume. You can also tap above the camera to disable the camera & microphone completely. There’s also a camera privacy cover included for additional protection.

Regarding connectivity, the Portal devices support Wireless-Wi‑Fi (802.11a/b/g/n/ac), Dual band MIMO (2.4GHz and 5GHz), and Bluetooth 4.2. It’s also an Alexa-supportted device, so you can get Amazon’s voice assistant without buying an Echo device.

I’ve used plenty of video chat tools in the past (Skype, Facetime, etc…). You either sit down at your computer / laptop, prop up your phone or hold the phone in front of your face the entire time so you can move around. Ultimately, you are always in a fixed position with the camera.

The Portal is the first device that’s freed me up to wander around the kitchen, office, living room while still chatting with the person on the screen, since the smart camera follows you around. It’s actually a bit unsettling at first because you have to change your behavior. I find it really useful in the kitchen, since I’m always moving around while cooking or cleaning. 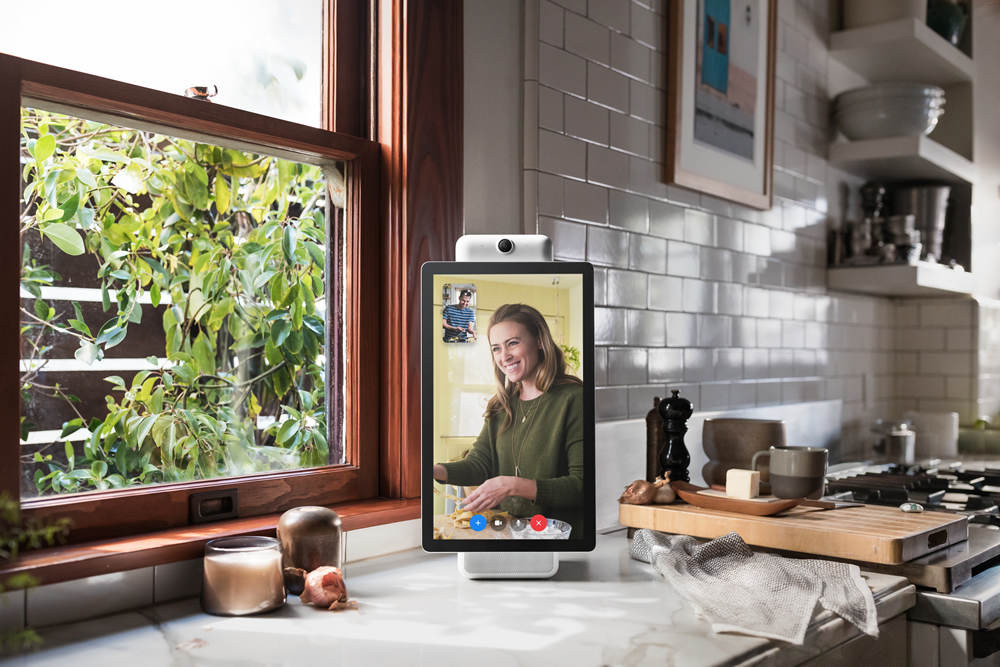 The video quality is really impressive, no dropped calls either. You can really see the difference in quality with the 12MP camera and the extra wide angle lens. Portal also automatically widens when more people enter the room, great for big families.

One cool feature is the ability to track a specific person on the video stream. You just double tap their face and the Portal on the other end will track their movements around the room. Ideal if there are pets or kids running around the room.

I’ve been using it to chat with relatives on the opposite coast. Portal to Portal calls offer the best quality, but you can basically call anyone with Facebook Messenger installed on their phone. You can conference in a total of six additional video feeds, although talking gets a little hectic with that many feeds open. Great for celebrating holidays with distant family though.

I love the Story Time app! While my nephew isn’t quite old enough to keep his attention on the story, I can tell he will enjoy it as he grows older. It basically launches you into a children’s story (like the Three Little Pigs) and animates the screen as you read along in the story. It also utilizes those face animations seen in apps like Snapchat, turning into the cartoon wolf in the story or one of the pigs.

You can really tell there was a lot of thought put into the Story App, an attempt to attract family users. My only gripe is the limited number of stories in the app. Facebook clearly needs more content for kids in addition to a way for users to purchase more stories for a few bucks.

The Facebook Watch app is ok, if you like watching Facebook videos. You can find video shared by your Facebook friends as well as popular video clips / news clips. I’ve rarely used it, mostly because I rarely use Facebook for video clips. 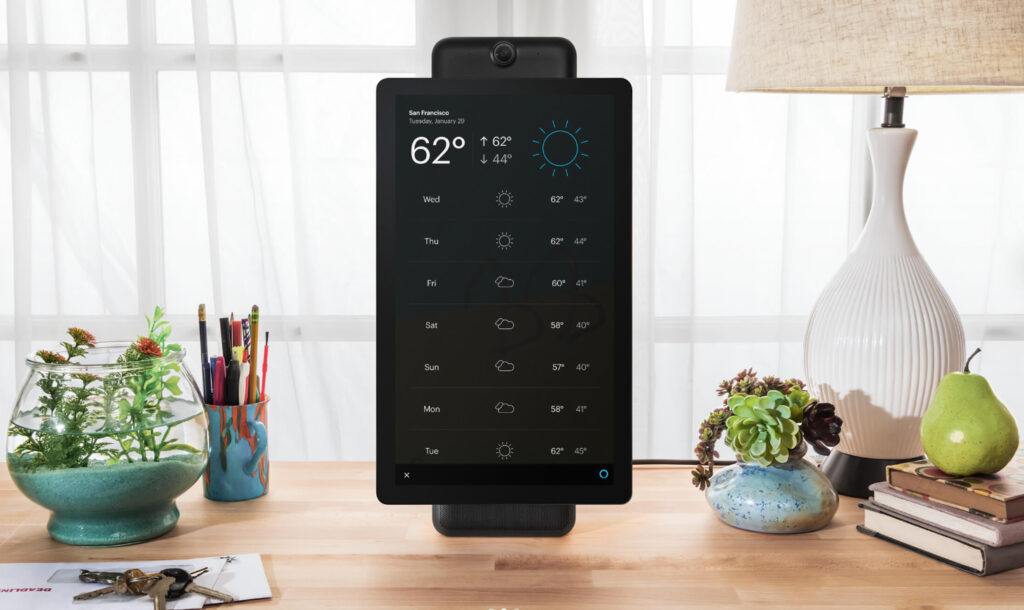 The Superframe option is pretty cool. You can set it you display your own Facebook photos / videos, basically acting as a screensaver. If you multiple Facebook accounts connected to the Portal, you can pull all that media content in and display a massive amount of media if you choose. The menu options are very granular, drilling down to individual photo albums.

If you don’t want to display your own photos, the Portal is loaded with a collection of scenic backgrounds to display while the Portal isn’t in use. It can also display the current weather in your area as well as birthdays of your Facebook friends.

I love using Pandora and iHeartRadio to stream music. Just like a smartphone, you can launch the apps to play music in the background while browsing around in other apps. The touch interface is easy to use, ideal for quickly popping around to other artists / songs while working in the kitchen. 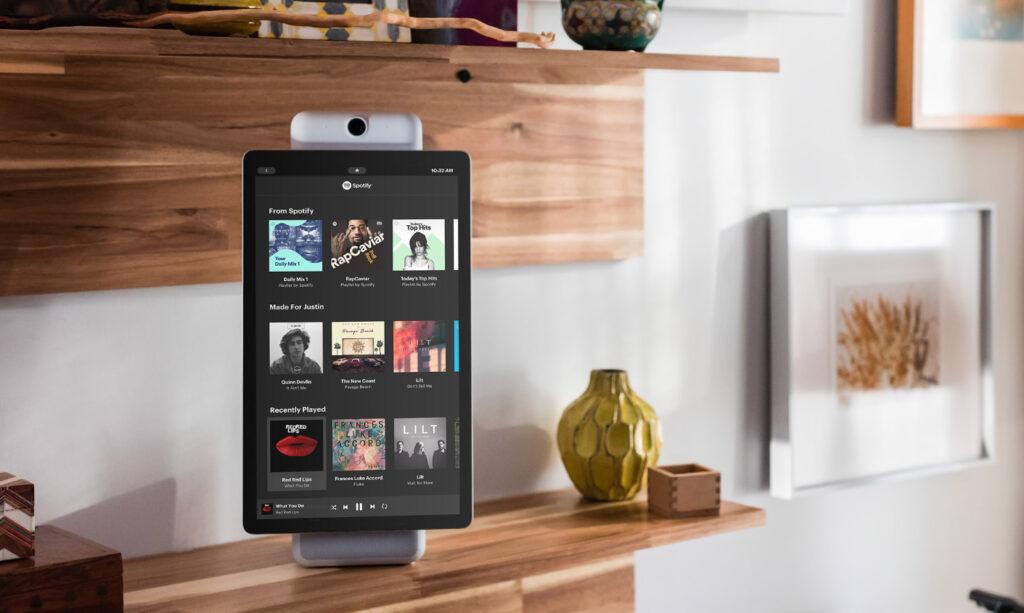 Facebook has also included a Spotify app, but the downside is you have to be subscribed to Spotify Premium to use it. There’s no access for the free version ion the native app. You can use Alexa to stream music from Amazon as well as pair your phone / laptop to the Portal to stream purchased music to the device.

This is where the Portal hardware really starts to become unattractive compared to devices like the Echo Show or even tablets. There’s a handful of news video apps (ABC, CNN, Fox), a Watch app for Facebook videos, and a web based interface to support YouTube. that’s pretty much it. No native apps for Netflix, Hulu, Amazon Video, etc… Even six months after launch!

That being said, you can stream Hulu videos using the Portal’s web browser. Navigating Hulu is a little slow in the browser, but streaming videos works perfectly well. Amazon Video also works using this method, but Netflix does not. You can log into Netflix and see the video previews, but the site throws up error messages when attempting to stream video.

The web-based YouTube interface is fine, but the mobile app interface would really improve the experience. It’s tough to click the play, volume buttons on the web interface on the 15-inch screen. I can’t imagine how difficult it’s going to be on the 10-inch. 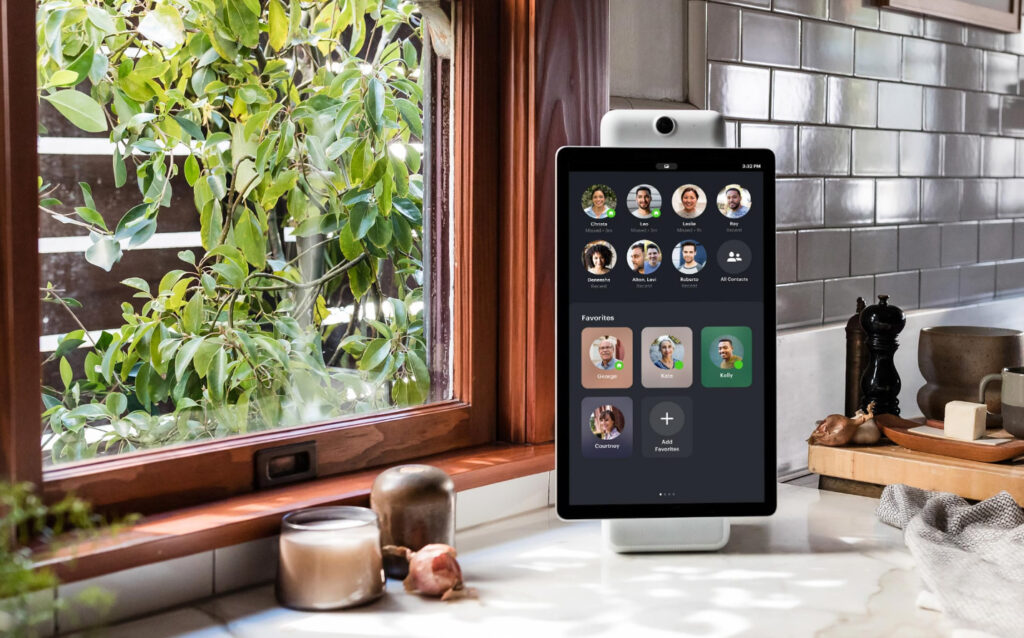 I love cooking and the Portal doesn’t disappoint (if you want to use it in your kitchen). There’s a Food Network app that’s pretty good, but I really use it for YouTube walkthroughs as well as looking up new recipes on any site. It’s much easier than trying to scroll through my smartphone while in the weeds preparing dinner.

There’s a collection of gaming apps included, not particularly exciting though. Words with Friends and Draw Something are probably the most well known games. There are multiplayer board games like chess, checkers, and battleship as well as card games like gin rummy and poker. There’s also Sodoku, if a single player experience is more enticing.

Should I Buy This?

One of the biggest problems with the Portal at the moment is the price. It’s an expensive device to buy just for video calls, less expensive if you are using it for streaming all the time. While sales have brought the 10-inch model as low at $99 (MSRP: $199) and the 15-inch model as low as $249 (MSRP: $349), that’s still pretty expensive for a video call that you could do on your smartphone or tablet for free.

That being said, you are getting extremely impressive video quality during calls and a move-freely, truly hands-free solution to video chatting. If you have family all over the country (or world) and want to stay in touch with them, this is an excellent way to do it. For the price conscious, perhaps wait until the new models are launched at the end of 2019 to see discounts on the first generation models.