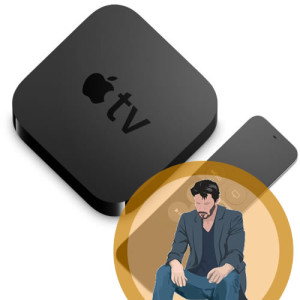 Three-and-a-half years after the previous generation’s release—an eternity in the tech world—the 4th generation Apple TV set-top box was announced with typical Apple fanfare back in early September and then appeared on store shelves in late October 2015.

Apple TV 4 ($149 for 32GB; $199 for 64GB) has all the things you might expect from a 3+ year wait: a flashier platform (aka tvOS), installable apps, a more powerful dual-core A8 processor (vs. the old single-core A5), faster Wi-Fi (802.11ac), more storage (32GB and 64GB options) and a souped-up, Lightning-rechargeable remote dubbed the Siri remote which features a clickable glass touchpad and a voice control button a la Roku or Amazon. 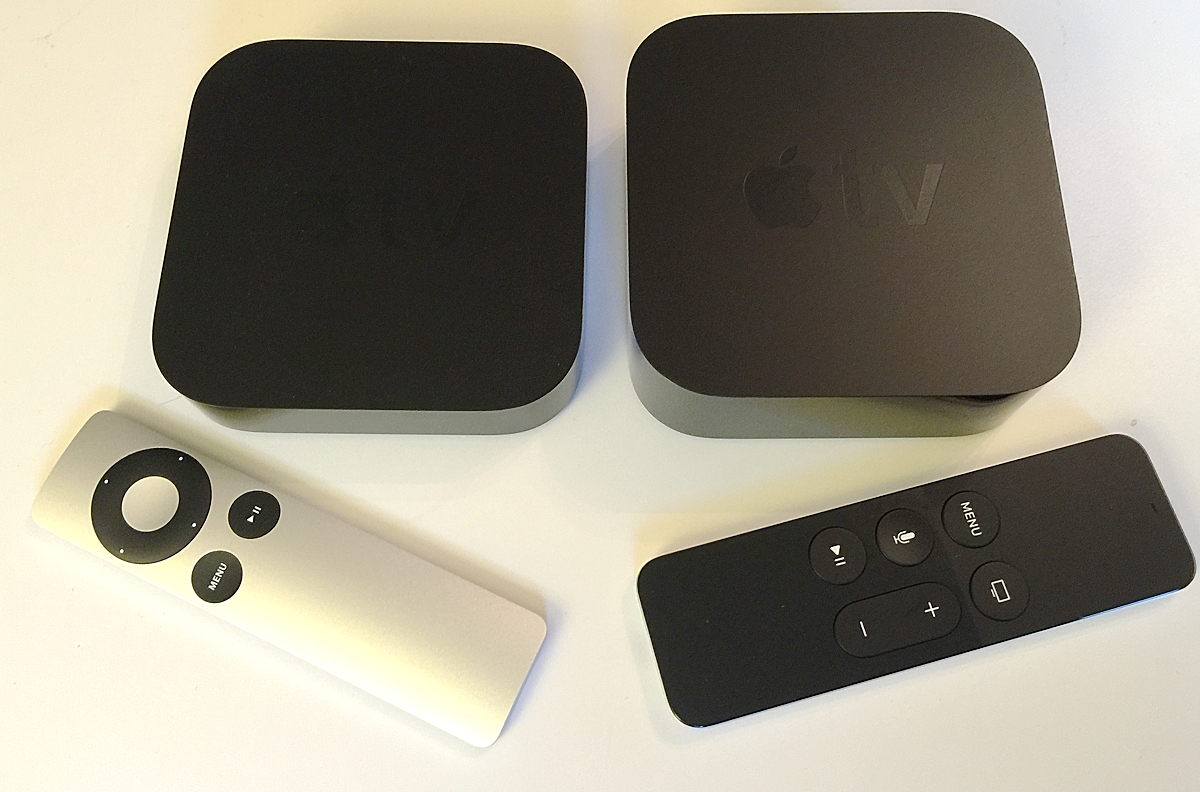 Apple stuck with the same basic look of the device, all black with the Apple TV logo on the top and nearly the same dimensions: an identical 3.9-inch x 3.9-inch square but slightly taller at 1.3 inches vs. 0.9 inches of the ATV3. Like Amazon did with its 2015 Fire TV (5/10), Amazon has also discarded the optical output from the previous generation, but the rest of the connections in the back are the same.

This all sounds like a recipe for another runaway Apple success, and yet something’s just not quite right about the end product. What went wrong? It has to do with expectations.

The changes above are evolutionary. We expected those. But we thought we’d see a couple notable upgrades:

Even as late as a couple years ago, the new Apple TV was actually supposed to be, well, a TV. Okay, we get it, it’s not, but then we were promised cable a la carte, plus broadcast networks. Okay, we get it, the cable companies are being difficult. So what about a Sling TV app? No?

This all sounds like a recipe for another runaway Apple success… What went wrong? It has to do with expectations….

Yeah, 4K support will be in the next one. But what about now? 4K isn’t pie in the sky or Blu-ray. It’s here, and it’s getting pretty cheap (just watch the Black Friday sales this year). And worse yet, those other guys have 4K.

Big whoop, you say? Maybe. If you’re betting on potential, then Apple hits it out of the ballpark. The new platform, tvOS, looks like it can grow exponentially beyond what its competitors have to offer. The gaming aspect of the Apple TV looks like it could revolutionize the gaming industry, especially if Apple is willing to take feedback from the gaming world.

tvOS: The Good and the Bad

tvOS is flashy in a good way. It’s awesome to look at. Apple does eye candy better than anyone right now.

Did I say flashy? Apple dispensed with that hideous old-school tiled screensaver of the previous generation and cooked up a super-fancy animated 3D landscape screensaver called Aerial that totally outdoes the screensavers on the Chromecast and Fire TV.

Press the Menu button twice and you can instantly gaze at the awesome screensaver whenever your heart desires. 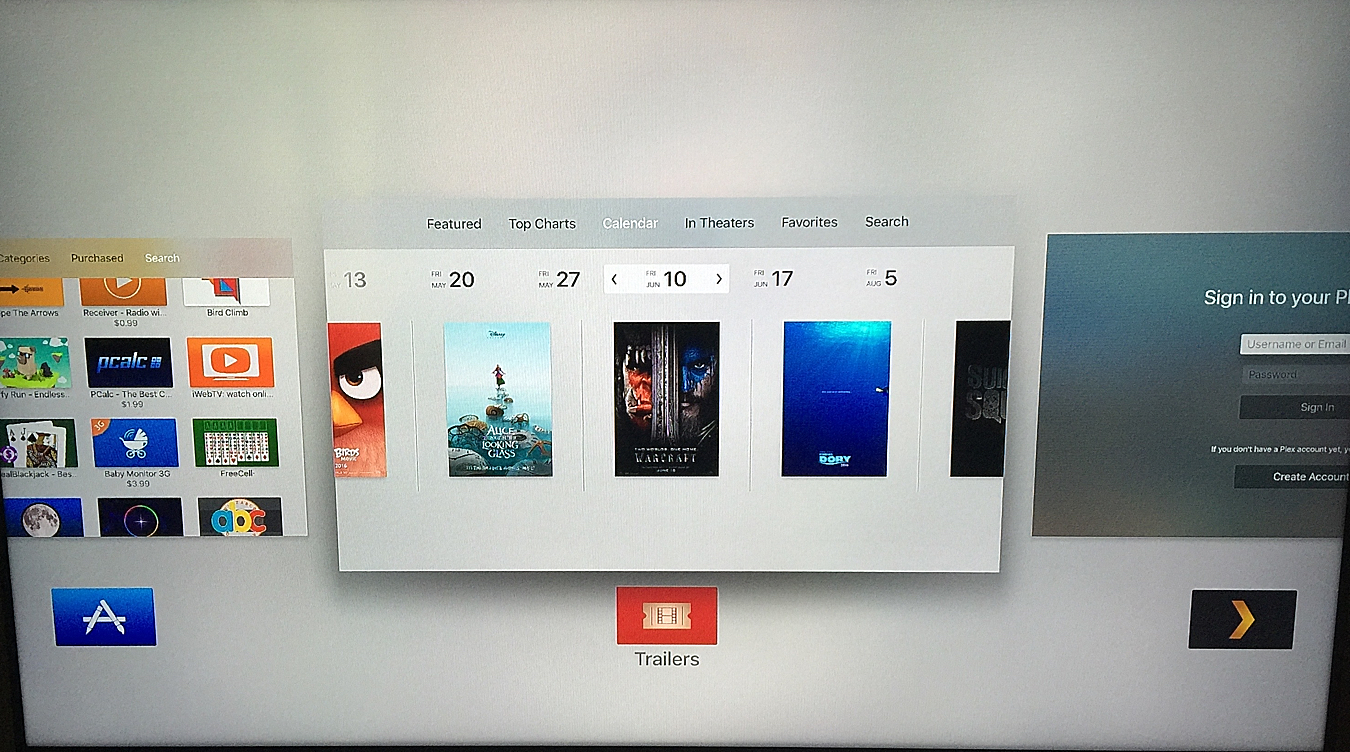 You can also do cool things such as app switching (like on iOS) by double-pressing the Home button. Also like iOS, you can swipe up to close an open app.

The Home Sharing app (aka “Computers”) has a much improved cosmetic experience, as images of your music and movie collection scroll past the screen.

Hey, there’s an App Store! Roku’s had this for a while, but Apple’s does look so much better. Plus, previously purchased universal iOS apps that are compatible with tvOS actually do appear under the “Purchased” tab, which is cool.

Everything is a joy to look at, but it’s not a joy to use. And we expect only joy from Apple. 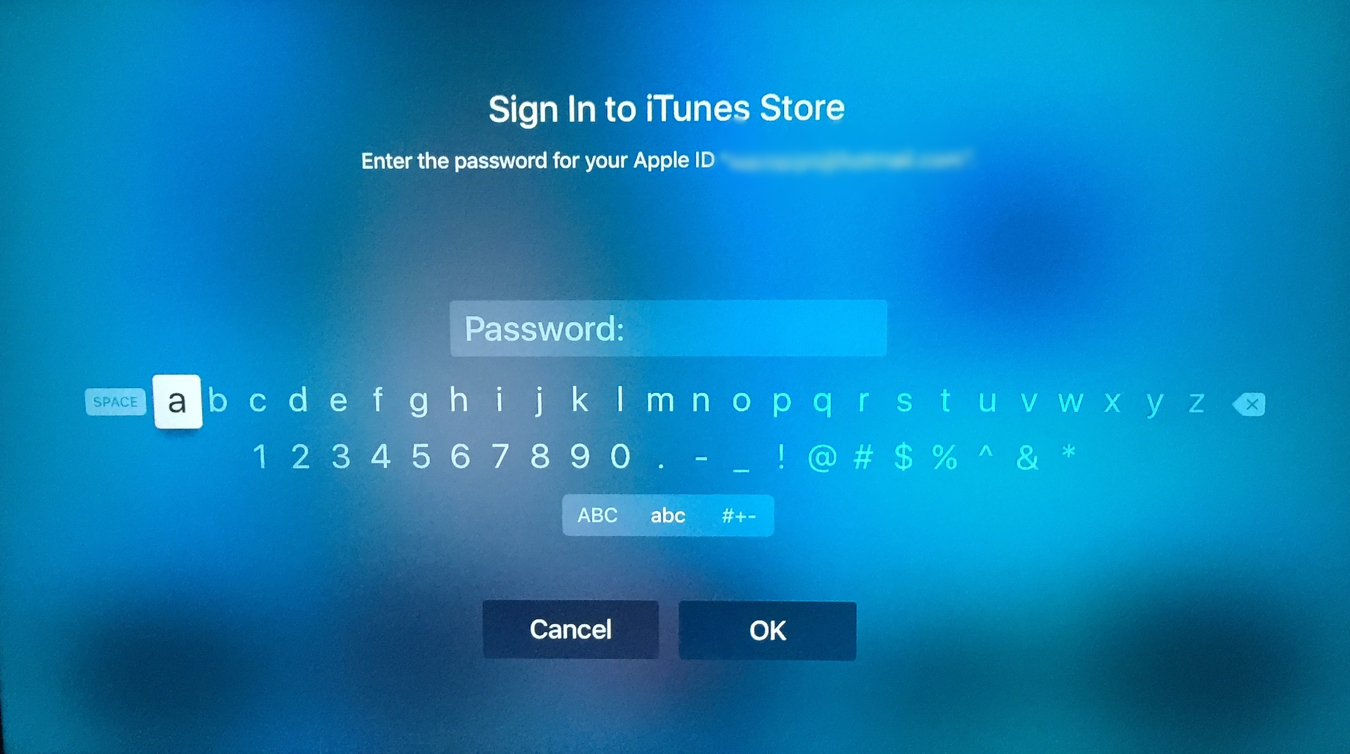 Your nightmare: the onscreen keyboard

When you set up an app, entering email addresses and passwords is heart-wrenchingly bad. Instead of the old, mildly frustrating grid featured on ATV3, you now have the Sisyphean task of scrolling across a single row of letters to input characters.

It follows Apple’s design principle of simplicity. And yet it’s terrible. It’s so pokey you may lose the stomach to install more apps because then you know you have to painfully enter your log-in credentials.

Roku’s on-screen QWERTY keyboard may not look simple, but it gets the job done.

Well, you say, why not just use Apple’s Remote app or Bluetooth keyboard, like you could with the old Apple TV?

Good idea, except you can’t. Not yet, anyway. (You can use Bluetooth headphones now, which you couldn’t before.)

Maybe it’s all a ploy to get us to use voice control. Surely good ol’ Siri can do it. Nope, sorry. She won’t enter letters for you, email addresses or anything that might make entering text without a keyboard easier. 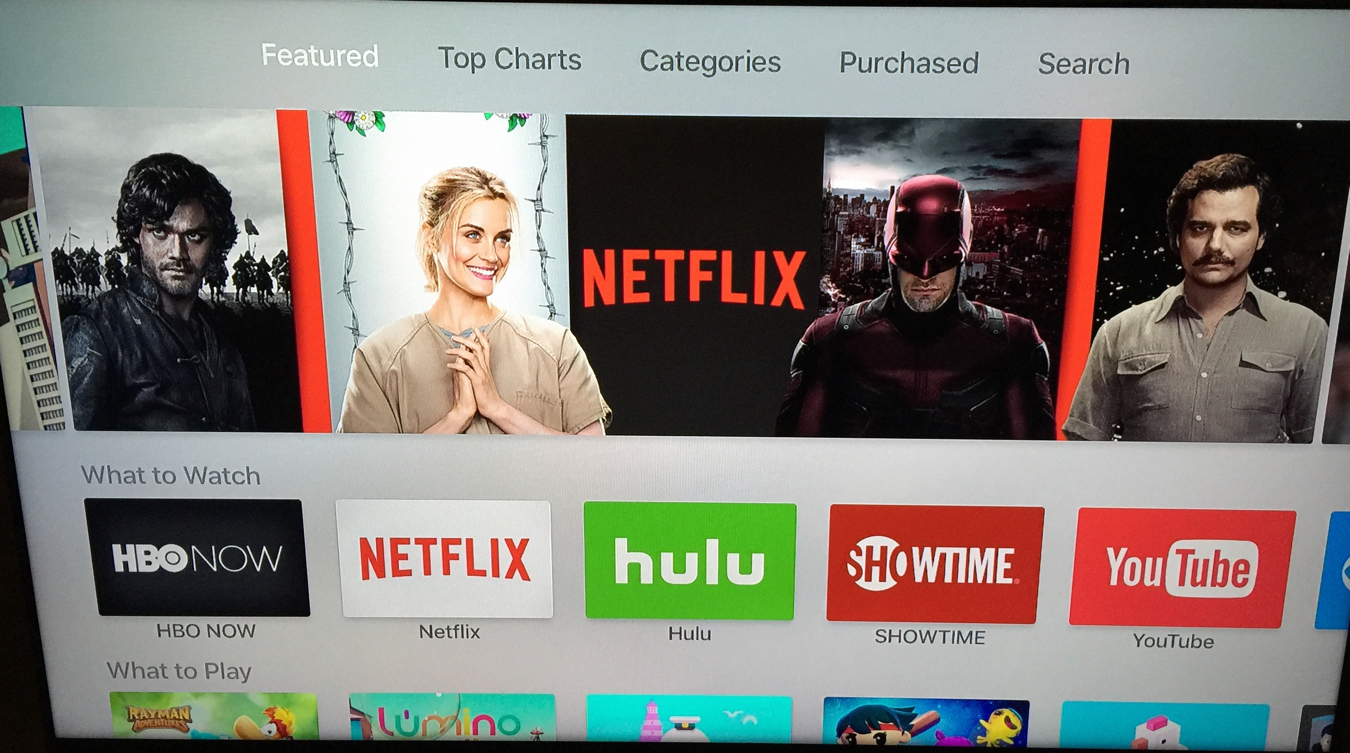 Speaking of installing apps, the Apple TV 4 comes with only iTunes, Music and Photos apps installed. You have to manually install old standbys like Netflix, Hulu and YouTube. It just seems like it would have been easier to remove them, if you really didn’t want them there.

By the way, it would have been nice if Apple had figured out a way to stop this whole authenticating apps business that some apps have (Hulu, PBS). It’s on other set-top boxes, too. And it’s annoying. For the love of streaming, there must be a better way.

As for the App Store, the pickings are slim right now, and that’s understandable given how early it is. In the category section, there are only “Games” and “Entertainment.” But after the hoopla surrounding shopping apps during the September product announcement, you still have to wonder what happened (especially since shopping is a new category on iOS). The only high profile shopping app that I saw was Gilt, the same one demonstrated at Apple’s Special Event back in September.

Maybe we’ll see some more shopping apps in the near future, but the holiday shopping season has already arrived.

Siri, Why So Quiet?

Apple TV 4 now has universal search, a welcome improvement that has been a mainstay of Roku set-top boxes for a while. Universal is relative, though, since it currently only scans Netflix, Hulu, HBO, Showtime and of course iTunes. 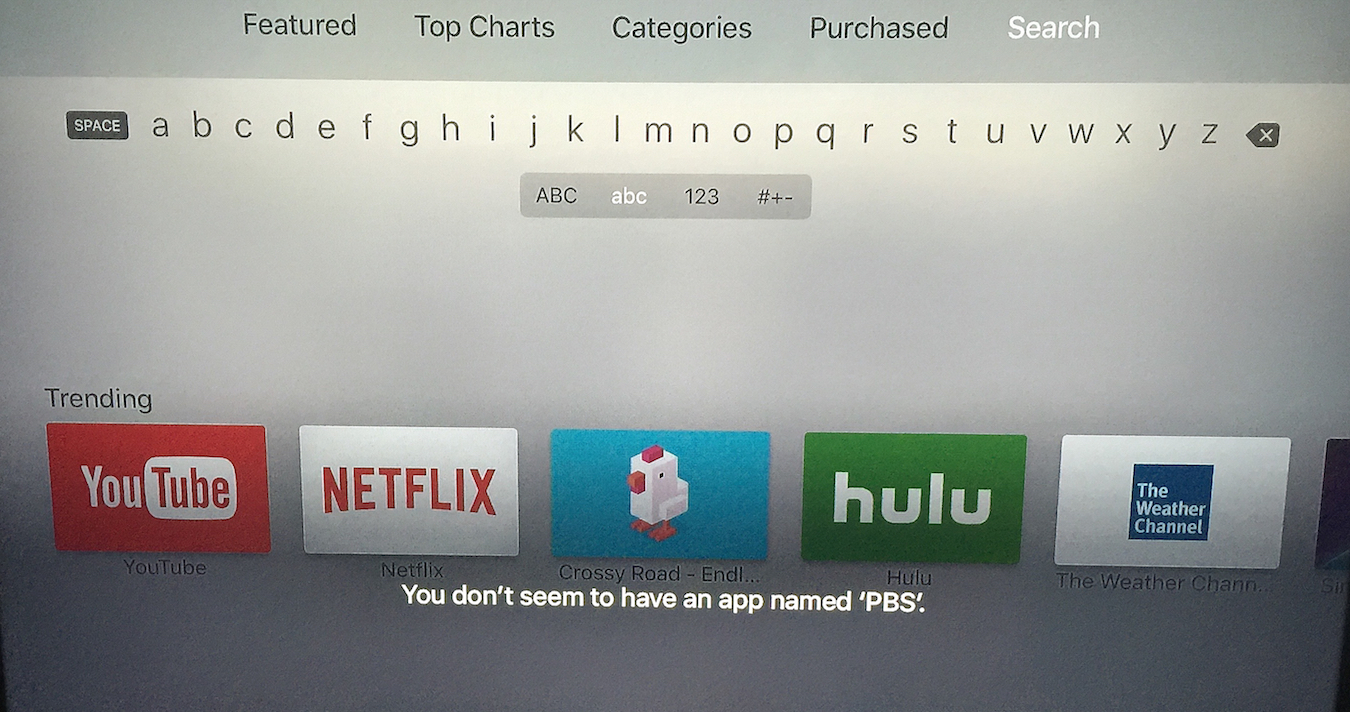 Siri’s voice search does a good job, but I didn’t find it any better than Roku’s or Amazon’s. You must perform universal search from the home screen because searching within an app is app-only.

You can’t use Siri to search for apps in the App Store, which seems like a missed opportunity. Instead, you have to use the dreaded on-screen “keyboard.” Oh, no.

One welcome development at the time of this review is Siri support for Apple Music searches as of tvOS 9.1 Beta. 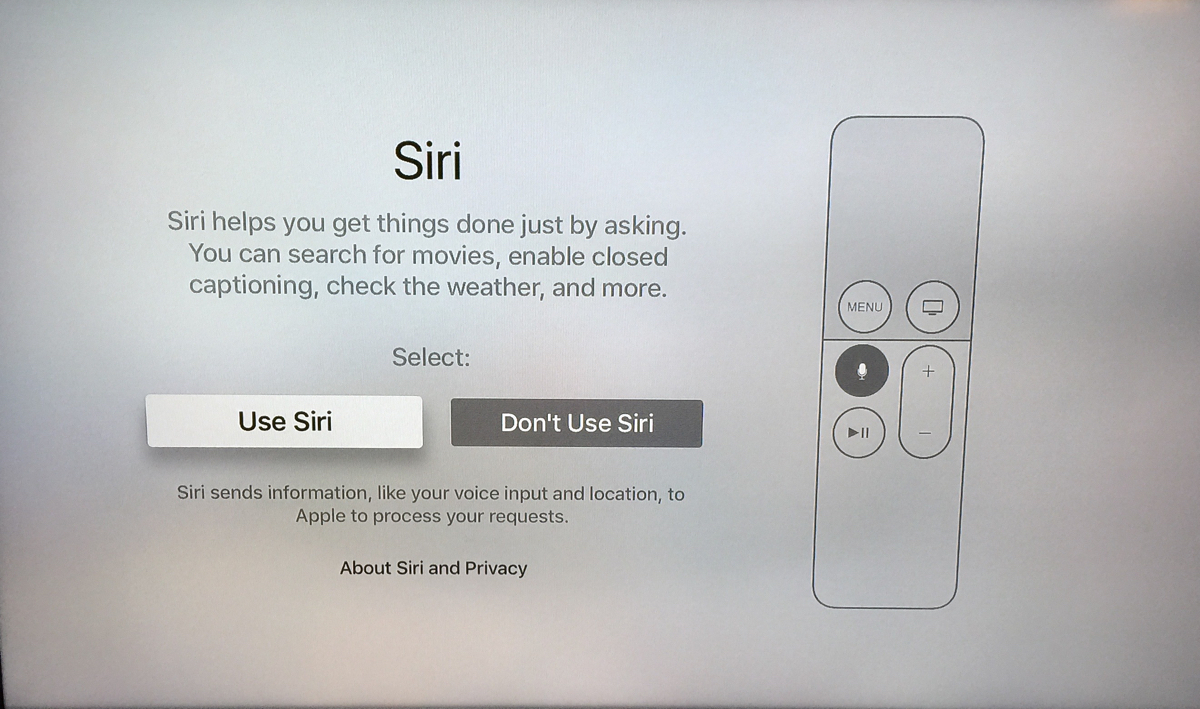 With a clickable glass trackpad and Apple’s intuitive design phliosophy, the new Siri remote sounds cool in theory. Personally, I found the trackpad fickle at times and mostly frustrating. From a tactile standpoint (in a darkened room), you can’t tell which end is up, and it’s still too light and easily misplaced. However, the remote can now learn to control the power and volume on your TV. Still, I’ll probably just continue to use my old universal remote.

You can charge the remote overnight with any USB port using the included Lightning cable. But since there’s no charging port on the Apple TV, you have to take the remote somewhere else, which just seems an unnecessary inconvenience in service of Simplicity™ (i.e. less ports to mar the design).

Most of all I just wanted Siri to talk. Please, Siri, just talk to us. This is not the Apple Watch. At least allow us to make it an option. Instead Siri has been rendered silent for the second straight major Apple product. Did the actress who plays Siri demand too much money?

Gaming is where Apple TV 4 can really distance itself from the Rokus and Fire TVs. The Nvidia Shield offers Android gaming and 4K, but at $199 and with a much lower mainstream consumer profile, it’s at a decided disadvantage to Apple. 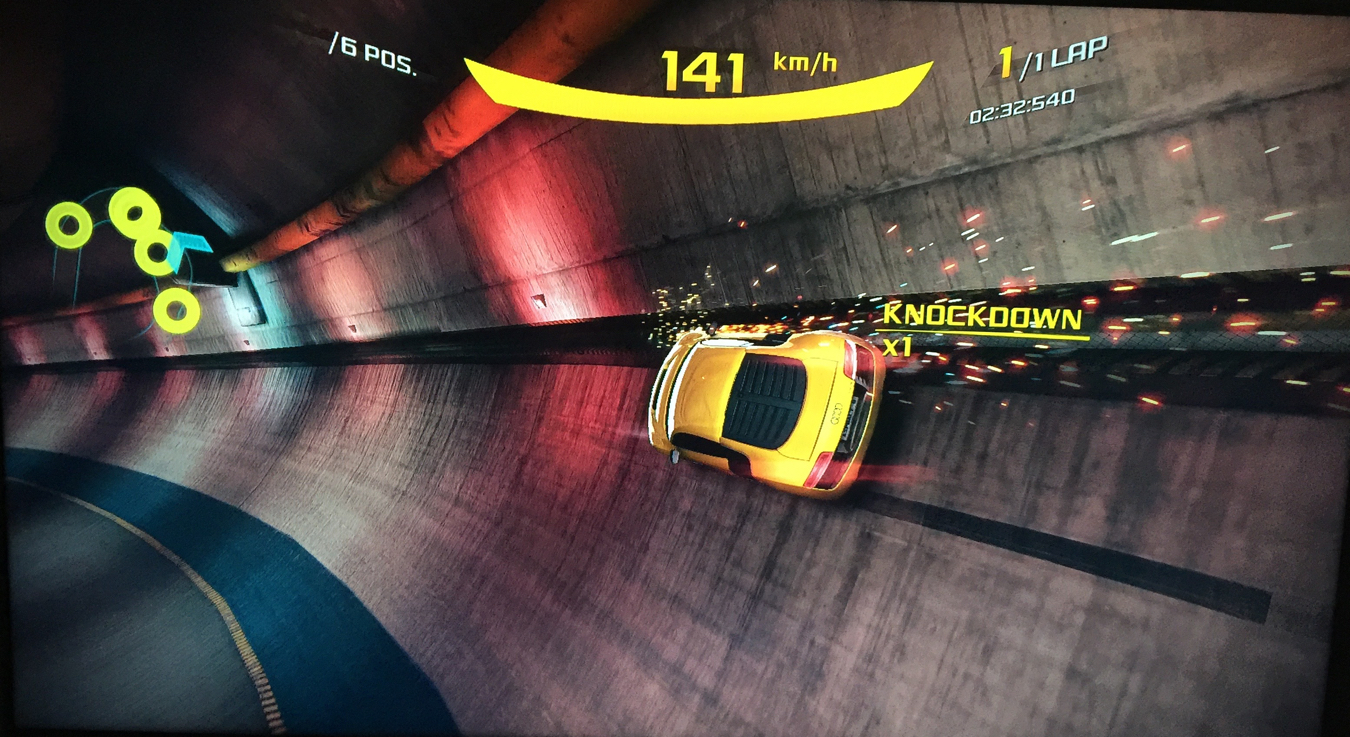 I had fun playing old iPhone favorite Asphalt 8 on the Apple TV 4, although gaming with the Siri remote does take some getting used to. The remote uses an accelerometer and gyroscope motion controls like a Wiimote, and can be used vertically or horizontally depending on the game.

Right now, Apple requires that all Apple TV games support the Siri remote, although that will probably change (see next paragraph). Up to two Bluetooth MFi (Made for iPod/iPad) controllers are compatible with Apple TV 4 and some games will support an iPhone or iPad as a controller.

The new Guitar Hero Live for Apple TV 4 will require the guitar controller (which is $100 by the way), so it already looks like Apple may be loosening up the Siri remote requirement, which has been controversial with gamers. However, Apple likes to go its own way, so we’ll see.

To me, there’s a bigger stumbling block for Apple TV 4 catching on as a mainstream gaming device a la the Nintendo Wii. (No, it’s not hard-core enough to compete with the likes of PS4 or Xbox One, and doesn’t need to be.) Right now, you can find mostly iOS games blown up to tvOS proportions, as expected. But seriously, AirDisplay could already do that on the old Apple TV. So the real question is whether console quality games will find their way to the Apple TV. 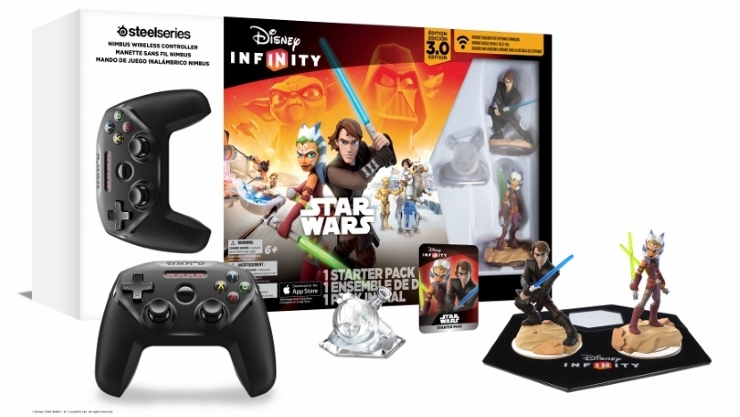 The platform itself [Apple TV] is actually really powerful… So we look at opportunities to bring things to the visual quality we want, starting with PS4, and then look at the performance and kind of dial it back. So it’s somewhere between Xbox 360 and PS4 currently.

Here’s the big “if”: if Apple can lure big studios to develop console quality games for the Apple TV—and it does seem technically possible—then Apple has an iPhone-level smash success. If it can’t, or it’s extremely limited and all you can play is Angry Birds, then it becomes the Nvidia Shield.

Apple TV 4 is a beautiful product, but somewhere along the line, user-centered design was sacrificed for design for design’s sake. I think this is a critical error that’s very much noticeable in the practical day-to-day usage of this device.

The latest Apple TV promises a lot in the future, but for consumers trying to save money, it’s not a better product right now for a higher price. The majority of users simply want to stream movies and TV, and even the old Apple TV did a good job of that.

In a year, the Apple TV will likely be a success, but I believe gaming will have to save it, and that won’t entirely be up to Apple.