So far, this year has taken severe and distressing turns for nearly everyone across the globe, which leaves video games in an awkward space between being trivial and almost necessary as distractions.  We’re reaching those summer months where people typically start to head out on vacations and, alternatively, retreat inside from the heat … but as we’ve all come to expect with this temporary “new normal”, the inclination to just stay indoors is much stronger than the average. Had one particular release not been delayed due to the year’s complications, we’d have a pretty desolate release calendar for this transition month of June, driven mostly by ports – proportionately for the Switch — of admittedly some pretty great games. Alas, PlayStation owners will have much to rejoice as a long-awaited sequel to one of the format’s best experiences finally gets unveiled. Let’s take a closer look. 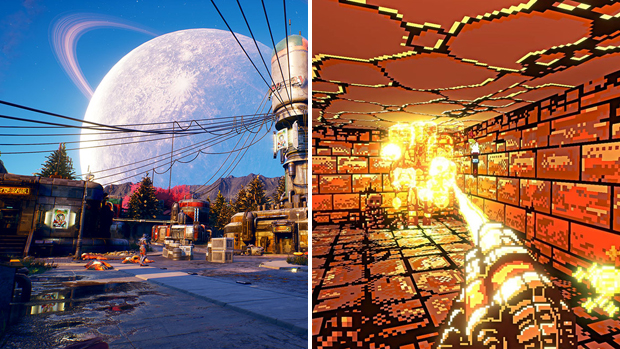 Get The Outer Worlds at Amazon          Get Project Warlock at Microsoft

A lot of anticipation mounted for Obsidian’s The Outer Worlds, as it looked like they were bringing their open-world strengths from Fallout New Vegas into a brand new property built from the ground up. Expectations were perhaps a bit too lofty or even skewed, as what they delivered wasn’t on the same broad sandbox scope as the newer Fallout games. Instead, Outer Worlds satisfyingly resembles the structure and exploration of older-school RPGs – branching narratives on self-contained areas on a map — through the perspective of a first-person shooter, and it excels through the lovingly-crafted world, characters, themes, atmosphere, and role-playing options. What it lacks in length and the possibilities of endless exploration across this unique world, it more than makes up for in polish, devotion to the concept, and smaller-budget gumption in actually trying to deliver on the concept.  Now the Switch can get in on the action.

Amid this renaissance of rebooted shooters, notably Doom and Wolfenstein, nostalgic memories have been rediscovered of playing through those classic games in their original, low-pixel state. While those other games are reminding old-school players of gaming experiences from the past, Project Warlock hopes to transport them back there through a new first-person shooter that echoes their strengths. Fusing together standard FPS artillery with magic weapons and spells – which also taps into memories of Heretic and Hexen for the same group – Project Warlock dedicates itself to feeling exactly like those games with more modern, self-aware design elements behind upgrade choices and level construction.  Released in 2018 to Steam, it’ll be available on all the current-gen consoles by the third week of June, popping up on different consoles on different days of the week. 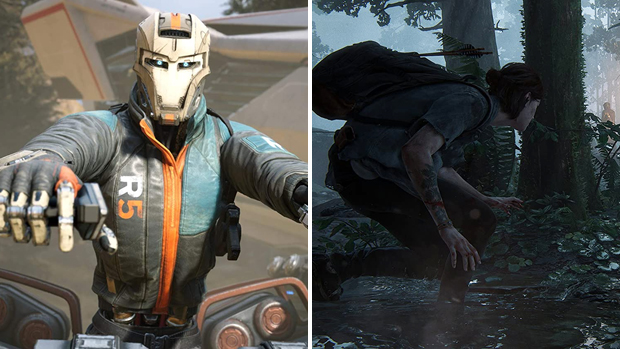 Get Disintegration at Amazon          Get The Last of Us: Part II at Amazon

Innovations aren’t easy to achieve in established gaming genres, especially when trying to combine ideas into a new concept that’s appealing to a broader audience.  Disintegration is giving it a shot, though, by welding together the immediate action of a first-person shooter with the stage-based pacing of a real-time strategy game.  Players control a soldier who pilots a device called a Gravcycle, which allows the controller to hover above the battle area, shoot enemies and dictate the actions of squad mates on the ground.  It’s this navigation that introduces the RTS aspects of Disintegration, where dictating their abilities seems to play out like a single-player squad-based shooter on steroids, driven by the strengths and weaknesses of choosing different specialists for actions. Originally built with real-time strategy in mind and then branched out into the FPS perspective for variety, this title from Halo co-creator Marcus Lehto and his new development studio, VI Interactive, has a lot of potential.

Few people will say that Naughty Dog makes the most challenging video games out there, but it’s very hard to dispute how masterful they are at blending cinematic and engaging game design. When they took their philosophies into the realm of zombie pandemic storytelling for The Last of Us, it was a brilliant marriage of style and concept made even better by the endearing relationship that develops between Joel and Ellie, the game’s brilliantly voiced protagonists.  A sequel wasn’t a certainty, but most aren’t surprised that Naughty Dog has continued the story with The Last of Us: Part II, shifting the gameplay perspective to that of the now 19-year-old Ellie. Driven by a plot involving a cult that’s emerged in the wake of the disease apocalypse, the gameplay philosophies should be relatively similar between the original and this sequel, powered more by strategic cover-based tactics and the horror-survival tension that follows. Expectations are high for Part II, but Naughty Dog’s primed to deliver.

Also, good luck getting the Ellie Edition — the one with the backpack and the other special edition goodies — featured in our Limited Edition Video Game Guide. It continues to sell out as soon as it becomes available. 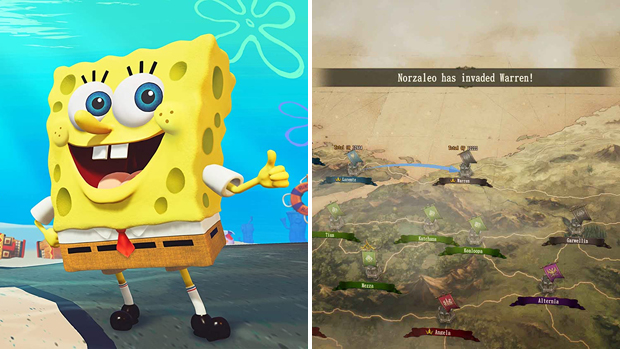 Get Spongebob: Rehydrated at Amazon          Get Brigandine 2 at Nintendo

If a videogame adaptation manages to capture the charm of a popular property, then it can be forgiven for some simple game design and mechanics. The Spongebob Squarepants game released during the PS2 / Xbox era fits that label, offering tons of content and heaps of personality that a wide range of audiences can enjoy, much like the animated show itself. Perhaps Battle for Bikini Bottom is an unusual choice for a remastering, but there’s no denying the enduring popularity of the character nor the fondness players from that era have for how it extended the character into the gaming arena. Rehydrated will be preserving the general gameplay framework of the version from 2 console generations back, while also reintegrating cut content, remastering the soundtrack, and including multiplayer modes.

Brigandine: The Legend of Runersia — June 25

It’s interesting that we’ve arrived at a state for media where sequels can come a few decades after the release of the first installment, and there isn’t much damage done to enthusiasm for it … or, if it’s a lesser-known property, it can just rejuvenate interest in a long-lost property. Released on the first PlayStation over 20 years ago, Brigandine is a tactical war strategy game that involves orchestrating battles between nations on a hexagon grid, which then cuts to zoomed-in depictions of the combatants – both knights and mythical monsters – engaging in attack or defense. This sequel, The Legend of Runersia, retains a huge chunk of the gameplay ideas from the original, leaving this current-gen iteration looking just like an updated, polished iteration of the legacy title with little overt change. That is, except for the zoomed-in scenes of the battles, as it seems like the developers have switched to letting the mini characters on the hex map beat up on each other as enough representation, like other tactics games.

The PC will actually be getting a few satisfying goodies throughout June, including remastered collections of Command and Conquer on June 5 and Samurai Showdown on June 19, timed with the PC port of the 2019 Samurai Showdown reboot also arriving on the 19th.  Switch users will also have the pleasure of hopping behind the wheel with Burnout Paradise: Remastered on June 19, while those interested in free-to-play games will have multiplayer shooter Valorant on the PC on June 2  and actioner Ninjala on the Switch on June 24 to try out.