Video Game Limited Editions of 2020 Worth Seeking Out

As a longtime collector of physical media – not just of the media itself, but of unique collector’s editions and exclusives – it’s almost sad to see what’s happening to the decline and future of “little shiny discs”. For CDs, it’s a freefall; for 4K and Blu-ray discs, there’s still plenty of life left there, but some products one wouldn’t think would be scarce have been running out-of-stock and out-of-print much quicker than anticipated. The market for video game limited editions seems to be caught in the middle: while there’s certainly a move to transition over to digital libraries, the collector culture tends to be a tad stronger in the gaming community and, therefore, still has a healthy audience for elaborate versions of otherwise mostly standard-edition releases of games.

There’s enough uncertainty there, though, that it’s worth the while for those interested in limited printings of video games to probably hunt them down sooner rather than later … and there are some really, really good ones coming later this year. Below, we’re going to talk about some of those potentially scarce – or, just particularly cool – limited edition packages for notable releases coming throughout the remainder of 2020.  It’s hard to predict what’s going to be in high demand or what’s going to be printed at high quantities, let alone whether these games will actually be good or not, but it’s better for these to be on the radar instead of waiting until they’re off the shelves. Let’s dive in. 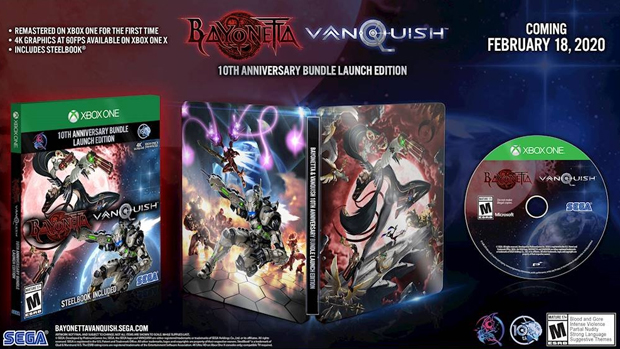 We’ll start the discussion off with something that’s already been released this year, and something that’s not out in the stratosphere in terms of pricing. Gamers who appreciate a challenge will likely have some familiarity with PlatinumGames, and while that might be because of the underrated Nier: Automata or their journey into the Metal Gear universe with Revengeance, it’s probably due to the iconic heroine that is Bayonetta and the challenging magic/gunplay environment that exists around her.  A remastered edition of Bayonetta has been holstered alongside the developer’s underrated, blitzed-paced sci-fi shooter Vanquish as a twofer collection for new consoles, and the Launch Edition comes with a sweet Steelbook casing featuring bold illustrations of the two games on either side. There are still some of these out in the wild, and $40 is well worth it for the pair of games and a limited collectible case prominently featuring one of last-gen’s most noteworthy new character creations. 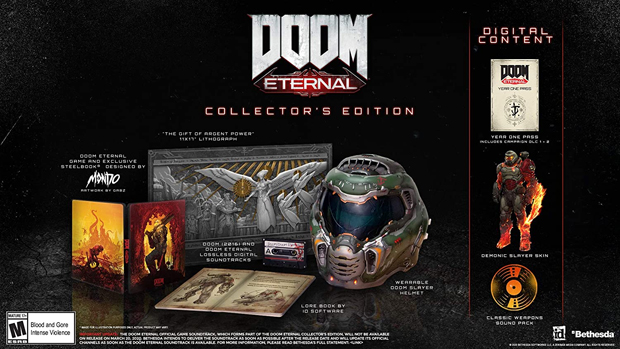 Ca we be real for a second? Yes, there’s a conversation to be had about how influential the exhilarating chaos of Doom has been on the FPS genre, as well as how splendid it is that the property has been revived again and popular enough to lead into this “sequel”, Doom Eternal. But, it’s tough to talk too much about all that when we’re leading into a discussion about a collector’s edition of a Doom game with … a wearable  Doom Slayer helmet. While no, it isn’t modeled after the helmets of nostalgia, there’s still something undeniably mesmerizing about the fact that this Doom Eternal: Collector’s Edition will come equipped with a wearable helmet that’ll be ready to wear between – or, hell, during – gaming sessions. A few extra goodies for the subtler fans are there as well: a really nice steelbook case, lossless digital soundtrack codes on a little cassette tape gadget, a lore book, lithograph, and DLC goodies. The value’s close to being justifiable, but frankly, the ability to just throw on the helmet and boot up Doom Eternal out of the box is close to priceless. 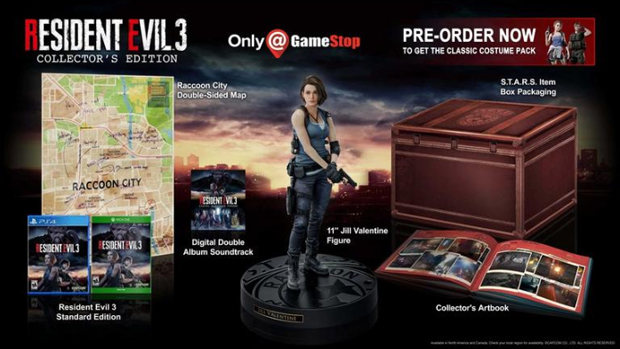 The remake of Resident Evil 2 took many people off-guard: while they may have expected a decent revisit to Leon and Claire’s charge through Raccoon City, most weren’t ready for it to be not-so-arguably the best horror game to come out of last year.  Resident Evil remains popular for a plethora of reasons, but that rejuvenated enthusiasm for the franchise has made it all feel fresh again, and it’s bound to do so again with this year’s Resident Evil 3 remake. Fan favorite Jill Valentine has been smartly remodeled for her standalone adventure, clearly evoking her classic look while exchanging the skirt for a few touches of tactical badassery that remind one a bit of Alice’s presence from the movie series.  This gives players a more reputable, grounded heroine to blaze through the zombie apocalypse in RE3, one who’s captured in statue form in the game’s collector edition alongside a neat double-sided poster, an art book, and a S.T.A.R.S. crate box presentation. This one’s only available at GameStop, so a pre-order might not be a bad idea. 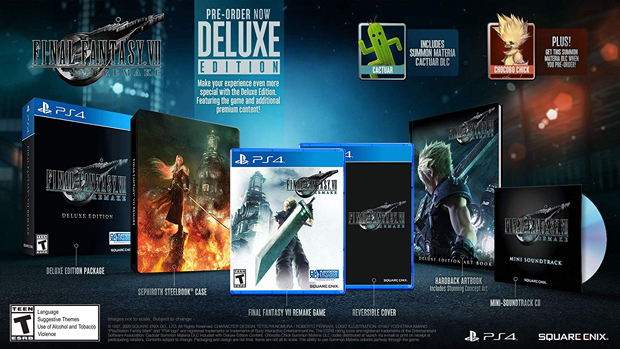 Perhaps it isn’t quite up there with jokes about Half-Life 3, but fans of the Final Fantasy franchise have been clamoring for a spruced-up reconstruction of FFVII for a very, very long time. After the idea of a remake was introduced in the PS2 era, many haven’t been able to stop thinking about it and discussing it, even as the developers kept a healthy distance from wanting to do so.  Finally, after much rumoring, development time, distribution paradigm changes and exclusive window decisions, a new version of Final Fantasy VII – the first part of it, at least — will be here in less than a month. To commemorate, Square Enix will be releasing a deluxe presentation of this “part” of the remake, including: a steelbook case featuring the game’s antagonist, Sephiroth; a hardback artbook; a soundtrack CD; and two pieces of “summon materia” DLC, one exclusive and the other tied to a pre-order. The book, music, and exclusive case artwork all add real fan-centric substance for a $20 premium, so this one’s worth consideration as an early buy. 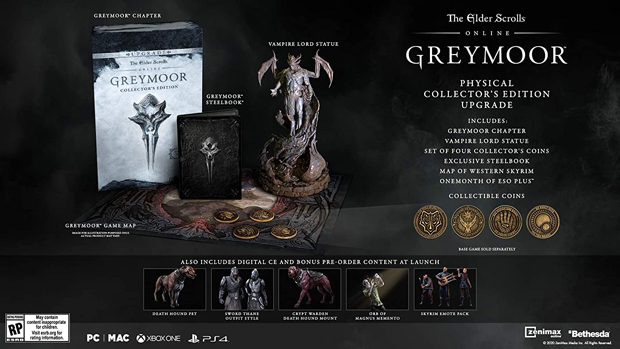 Even after an incredibly shaky initial release, Elder Scrolls Online is still going very strong and continues to maintain a robust player base.  Like most other developers in the MMO space, Bethesda has learned from missteps and dished out extensive updates, all the while releasing new expansions that offer fresh, exciting looks at what’s possible within their fantasy landscape and game design. They’re now on the fourth of these official substantive expansions, Greymoor, in which they’re journeying back to Skyrim – the western side – for a new chilly adventure connected to vampires. “Chapter” addons like this are a strange beast when it comes to physical collectibles due to their restricted appeal, but this edition of Greymoor offers an interesting package that comes at players from two general angles: there’s a sweet vampire (lord) statue, and there are Skyrim-themed coins also included. Roll those together with the addon itself, extra DLC, a steelbook, and a map, and it’s pretty sweet. 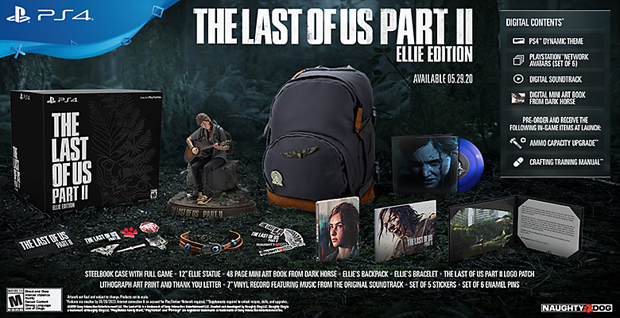 The Last of Us: Part II – Special, Collector’s and Ellie Editions

While Naughty Dog’s exhilarating action game design impressed throughout the Uncharted series, it was with the tension and emotions of The Last of Us that they likely created their very best work to date. The gaming community has obviously gone through apocalyptic zombie experiences before, yet the relationship between Joel and Ellie elevates it from being merely a strong horror game to one that strikes a deeper chord. A sequel to such an experience is dangerous territory, but it’s territory that Naughty Dog will brave with Ellie at the helm of this sequel.  Due to the return of past characters that players genuinely care about, this game will have a strong following, so making plans to pick up either the Special, Collector, or elusive Ellie Editions of The Last of Us: Part II would probably be wise. The Ellie Edition has proven to be tricky to acquire already, so if the idea of an exclusive replica of Ellie’s backpack sounds appealing, grab it when and while you can. Luckily, the other two premium versions come with the steel case, and the one-tier-down Collector’s Edition still gives fans the opportunity to get a replica of Ellie’s bracelet and a statue of the character. 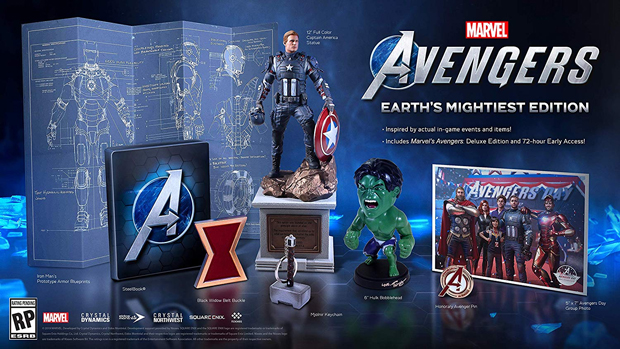 Believe it or not, it won’t be long before Joss Whedon’s original Avengers movie will be a decade old. It’s the blockbuster that transformed a neat intersection of cinematic superhero stories into perhaps the most popular big-screen comic franchise in history, one that ensures that a healthy chunk of people will be standing in-line on day one for anything new and exciting involving the team. Square Enix and the Crystal-Eidos development team are banking on that, as they’re going all-out with a massive limited edition of Marvel’s Avengers, a new action-based adaptation – with some uniquely different-looking versions of the characters – coming in September.  Along with a pretty standard steelbook, the Earth’s Mightiest Edition comes with a whole bunch of goodies: a statue of Captain America; a Hulk bobblehead; a keychain of Thor’s hammer; a Black Widow belt buckle; blueprints of Iron Man’s suit.  Each item has been carefully and familiarly designed so they’ll still appeal to general fans of the Avengers comics and movies, not just to those who might like the game, so this could naturally be a very hot item. 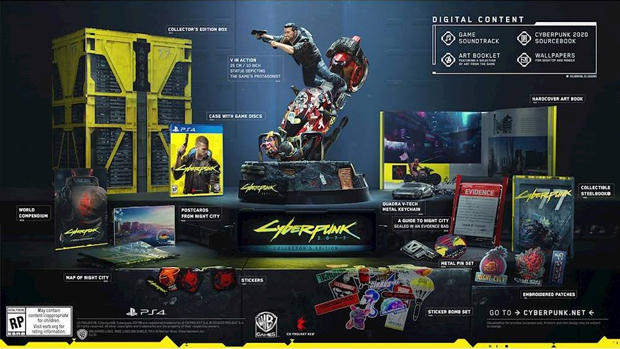 As the giants of role-playing video games have hit rough patches over the past couple of years, other labels have moved into the spotlight, chief among them being CD Projekt Red. While their Witcher series had already made waves with the RPG crowd, it was with The Witcher 3 that the company offered an experience that both triumphed over competitors and gave mainstream players something they’ve been yearning for on current consoles: a rich, choice-based, story-driven sandbox game in a fantasy world. Therefore, CDPR’s announcement that they’d be taking on science-fiction RPGs with Cyberpunk 2077 – a space even less crowded without Mass Effect – received big excitement. And CDPR is all about packing value into their presentations: while the standard edition comes with a world compendium, postcards, stickers and such, there’s a mega Collector’s Edition awaiting preorder status that’ll arrive with a statue, a very nice steelbook, game prop replicas, patches, etc. $250 is steep, but it’s bound to be an elusive set since CDPR’s fans are a dedicated bunch.