10 Essentials for Enjoying Your Next, All-Day Netflix Binge

Are you binge watching right now? Friends has arrived on Netflix, the third season of House of Cards is on its way (and looks as high-stakes as ever) and Amazon is finally tracking in the world of prestigious streaming with its critically beloved Transcendence hitting awards shows left and right.

Binge watching has surpassed the honeymoon phase of memes and jokery. It’s now a bona fide part of digital culture, the claw of never-ending entertainment grasping at even the strongest deniers and succeeding at sucking them into marathon sessions of good and bad shows alike.

Accept your fate, know your weakness, and then you can focus on creating the best binge-watching atmosphere possible. Is it irrational to plan for weeks of non-activity and sloth-like behavior? Probably. Does a lack of logic dictate what people do on a regular basis? Your answer to that question is answered by whether you continue to read further. If you do, you’ll find some handy suggestion on what to take with you into your binge watching life hole.

If you already have streaming hardware, skip past the first section. If not, read on!

If you aren’t streaming your entertainment directly through a TV, video game console or ancient magic, the world of streaming devices isn’t so heavily populated that you should cower in fear like old people did when cell phones were invented. In fact, there are really only a few notable competitors out there. The first device comes from perhaps the most notable competitor of all, in all things, everywhere. 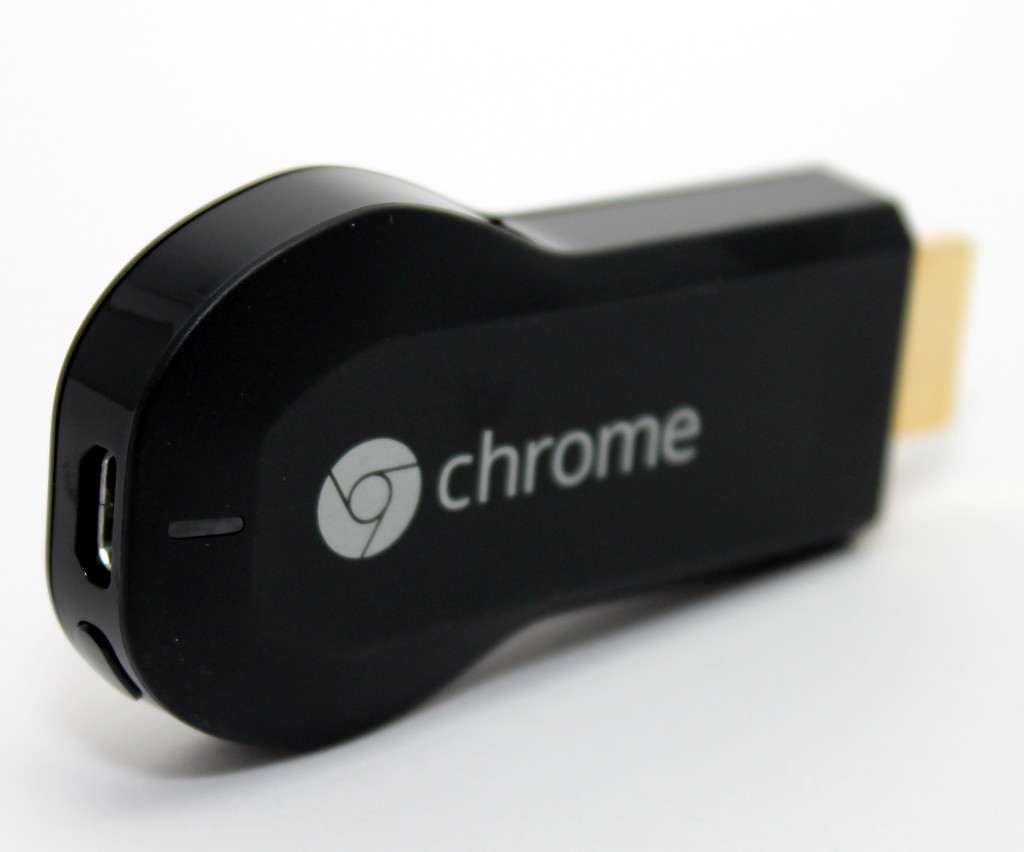 Google’s tiny little streaming device plugs directly into any HDMI port and does one of two things. It either accesses the traditional catalog of streaming services available through most devices, or it simply mirrors the image of whatever device you might be using (computer, phone, tablet, etc.) directly onto the big screen. Both options require interfacing with an outside device, which diminishes the convenience factor just a bit. On the other hand, Chromecast wins the category for most adaptable. It’s the most likely device to be able to put whatever you want on screen. Here’s our review of it. 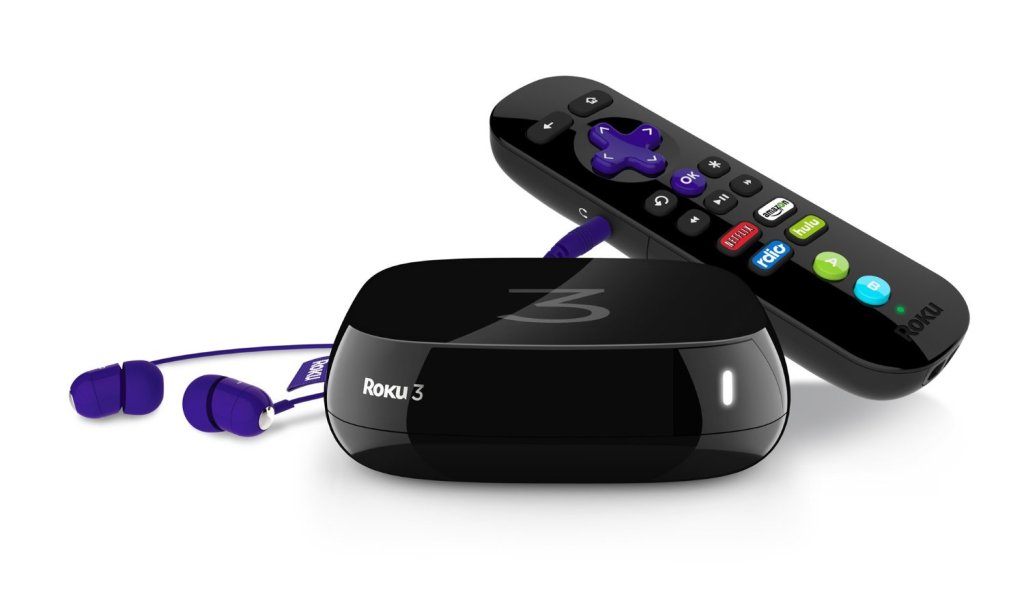 On the other side of the spectrum are the Roku devices, which run all on their own and even comes with a button stick (remote controller). You won’t need another device to make it work. Just wi-fi, and pretty much any Roku device is going to run any moderately popular streaming application. Far less technical, for sure, but the convenience of that comes at a steeper price tag than the Chromecast. Here’s our review of the Roku 3. Roku also has its own streaming stick, which we reviewed, but it’s a bit limited in the mirroring department. 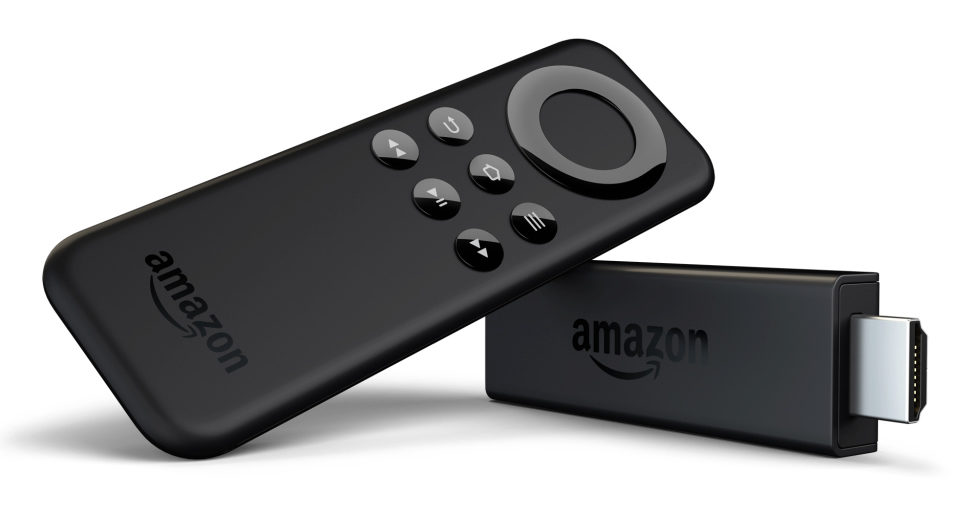 Lastly but certainly not least is Amazon’s own streaming stick thingamajig. Again, we’ve reviewed this one, and we reviewed it quite well. Not only does it run games and allow voice control, it’s well integrated with Amazon’s own media streaming services (music and video). If you’re an Amazon Prime member, this is your choice, hands down. If not, it still might be your choice. It’s well-priced and it performs well, though doesn’t mirror anything.

Nowhere else than in your own home do you have more control over that one inescapable necessity of life – the need to eat. It’s perhaps the greatest benefit to binge-watching that you aren’t privy to the whims of other people’s preferences or a movie theater’s severe lack of non-life-threatening goodies. That said, to deprive yourself of well-made popcorn simply because some poor high school kid isn’t making it for you behind the counter is a sin. That’s why you need to buy yourself a popcorn machine. They come in three flavors. 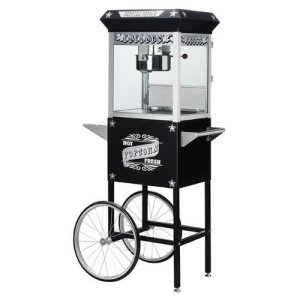 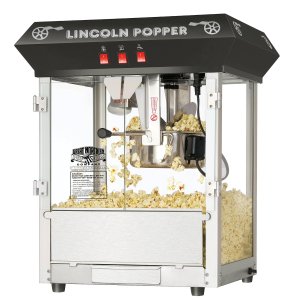 The Cheap and Easy Stove-Top Device 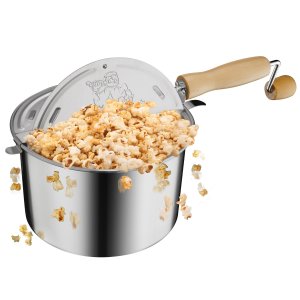 But if you aren’t into popcorn all that much (which would make you inhuman), there are other ways to transport the delicacies of the world into your living room without degrading their prestige with a microwave. 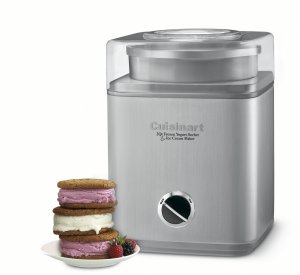 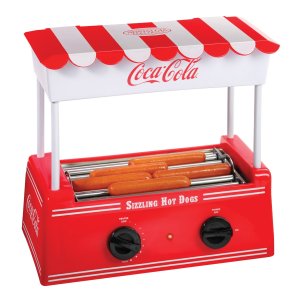 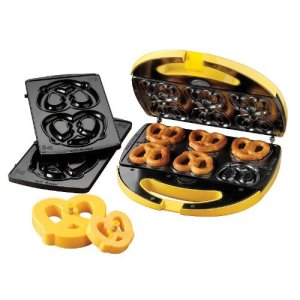 After keeping yourself alive, healthily or not, finding the utmost feng shui of comfort in front of that TV screen should take priority. And chief among comfort items are blankets and pillows. A rigorous online search happened us upon these sinfully comfy body huggers:

The Blanket that Never Lets You Go 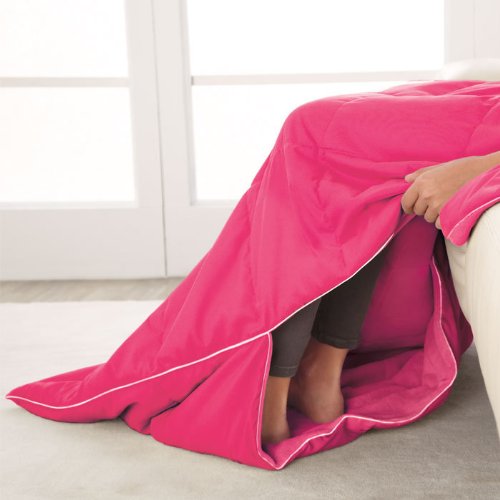 Give it enough time and your feet just might find there way out of the bottom of your blanket. Twenty minutes later your whole body feels cold, but you don’t quite register. And hour later and you’re on the brink of frostbite. If only you had this Pure Bliss Comforter from Brookstone, which pockets your feet in a reverse kangaroo pouch on the bottom.

‘Tis the Lack of Feels that Moves You 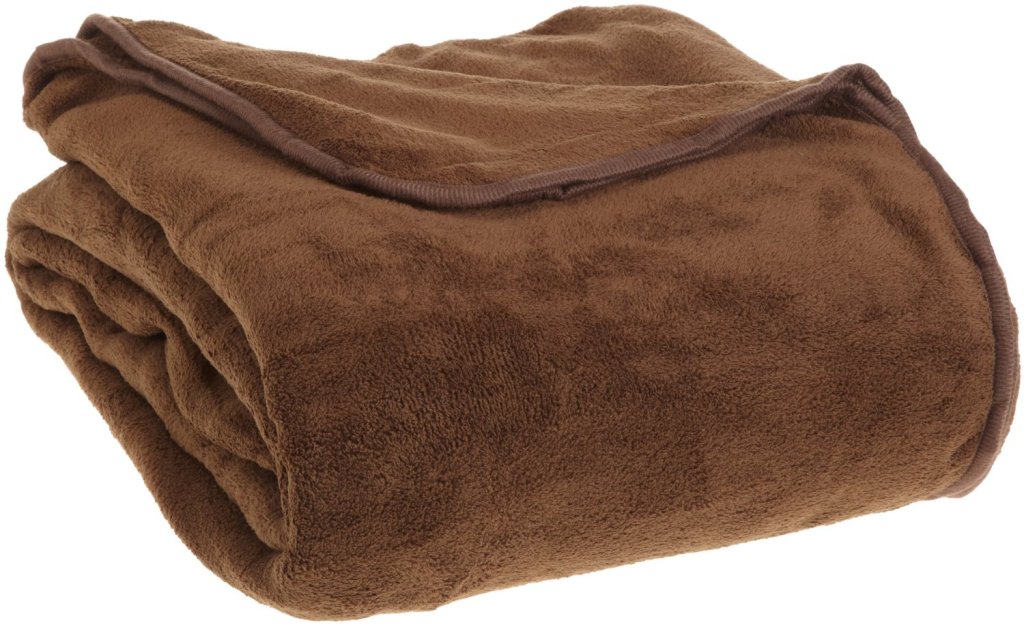 It’s in the name, really, called an Indulgence Blanket. With made up terms like microweave and coral fleece being thrown around, you can expect something pretty special. It’s a queen-sized blanket with the warmth to match but the weight of a sheet. You feel it, without really feeling it. Ya know?

Head on a Cloud 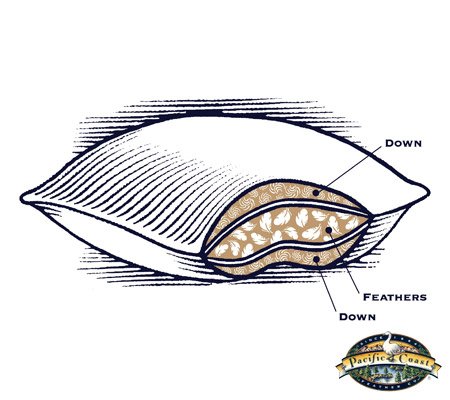 The 100 percent, 300thread cotton count probably means something technical to a sewing machine. To me it means my head won’t need to move for at least 12 hours, granted I’ve already made my popcorn. Then again, perhaps not. This one’s on sale at Amazon for varying rates (dependent on size) hovering around 50 percent off.

Now you’re settled and fed. It’s time to slow everything down and allow the binge to overcome you, which means upping the convenience factor of your Kevin Spacey den. Despite our best efforts as a global society, the remote control still haunts the living room. There are remedies, if not a cure. 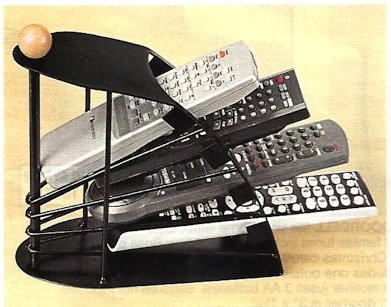 Most remote controller organizers are simply boxes with a price tag. This one has the unique feature of not being a box, but also allowing you rank you remotes by importance and access them accordingly. And that’s bottom to top, of course, as not to strain those arm muscles too much. 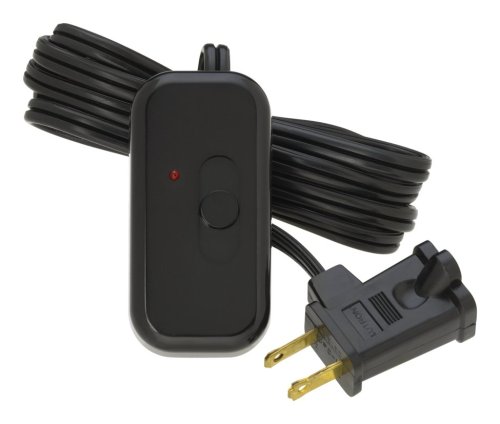 The Do Everything Button 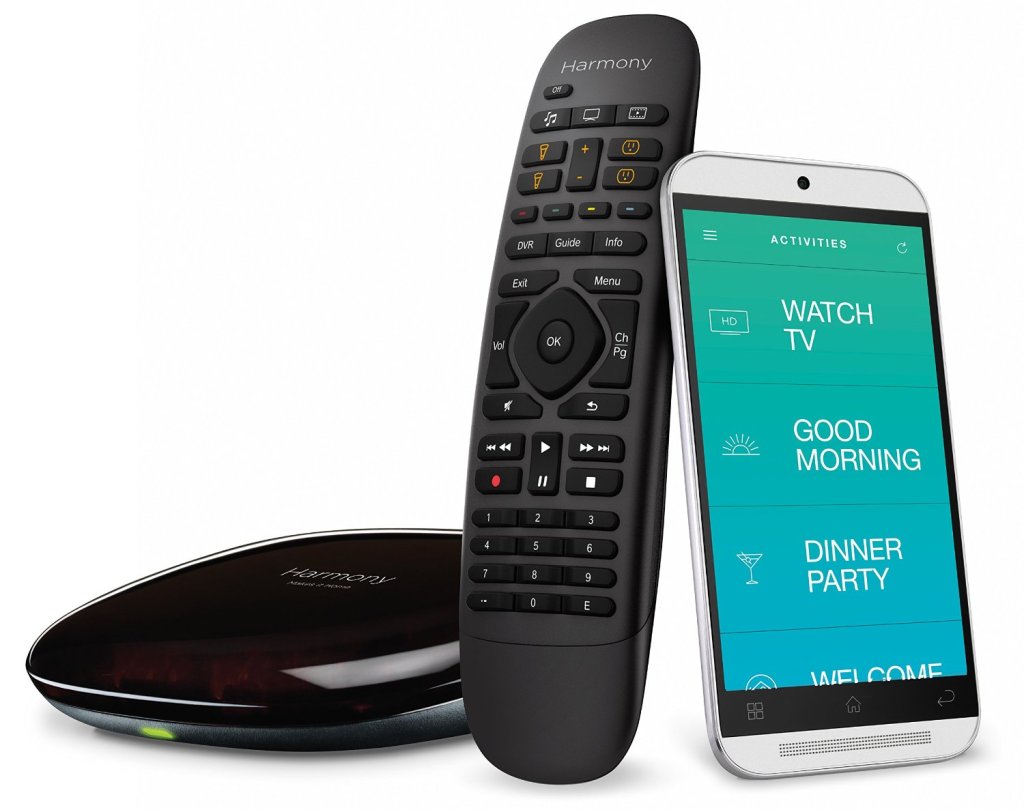 You won’t find a universal remote these days without some sort of mobile connectivity, but this is the one CNET claims as the best for 2015. It’s convenient, features buttons that actually put you somehwere worth being and, of course, interfaces seamlessly with any moderately competent Android or iOS smart phone. (You can check out the rest of CNET’s best Universal Remotes list here).