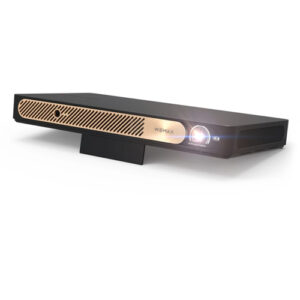 In the box, you will find the projector itself (measuring roughly 1″ by 8.5″ by 4.5″), the USB-C power cord w/ power brick, the remote control (the two required AAA batteries are not included), and a quick start guide. On the back of the projector, you will find the USB-C in for power, a 3.5mm headphones jack (or to connect an external speaker via wired), a USB 2.0 port and a HDMI 2.0 input.

I love the sleek metal design of the projector. There’s a sliding door on the front of the projector that covers the lens. That also doubles as the power-on function (there’s no power-on button). There are four rubber grip feet on the bottom to prevent sliding as well as a sturdy front leg that can be flipped down to display content as an angle. There’s also venting on nearly all sides of the projector.

The fan noise for the projector is rated at 30dB in movie mode (although it’s not much more in other modes, under 38dB). There are two speakers built into the unit, 2 watts each.

The Wemax Go Advanced 300 runs a proprietary version of Android called FengOS. If you are familiar with the setup process for an Android (version 9) device, you could be confused at first since there’s no direct Google Play store access (outside of the Firefox web browser). Instead, there’s the Aptoide TV app to find, install and use apps.

The initial setup process took a few minutes. The projector finds the remote control, pairs it and brings up auto focus correction screen to start. That’s an ideal feature for anyone on the go. You can also project from an angle, using the 4-point keystone correction tool (automatic correction). I tested it at several angles and never had an issue getting a clear, focused image.

After the auto-adjustment, the FengOS interface loads up. You can rerun the auto-focus at any time in the top menu as well as the 4-point keystone correction. The device will also detect when the image is being displayed at a new location and run the auto-focus toll automatically.

On the lower main menu, you will find a file manager (to access local storage or files via USB), input selections (to switch to the USB or HDMI port), cast projection (Android or iOS device mirroring), a Bluetooth speaker option (turns the projector into a BT speaker) and a Settings section.

There’s a ton of options in settings. Under system, you can name the device and change the auto-play function (auto-plays input source at boot). The security section can limit what Android apps can be installed. The energy saving section has options for the screensaver and wallpaper (a good feature when leaving the projector on for an extended time).

Under video, you have several options for preset image modes as well as a custom option to fine tune the settings. Under projection settings, you can set it up for mirrored, flipped or mirrored & flipped (depends on your setup). You also have access to fine tuning all the screen alignment / zoom / focus options.

Regarding setup for apps, Aptoide TV is an extremely poor substitute for Google Play. Here’s an example. I installed the HBO MAX app via Aptoide TV. I launch it and HBO wants me to download the latest version of the app, which is impossible from the Aptoide TV app. I load up Firefox to do it now, which forwards me to the Google Play store. Now I have to login to Google Play. I try that, attempt to download and it can’t install.

And that’s not even the most frustrating experience. There are apps in Aptoide TV that require you to use the painfully slow mouse mode. Netflix and Amazon Prime Video to name a couple. You have to use the directional buttons on the remote to slowly move the mouse cursor around (or connect a BT mouse).

My advice? Ditch the entire Aptoide TV user-unfriendly interface and plug in a $25 Roku or Fire TV stick into the HDMI port. Both of those interfaces are light years ahead of what’s being offered here within FengOS.

As mentioned earlier, the Wemax Go Advanced 300 is rated 600 ANSI lumens. If you are unfamiliar with the term, ANSI is a measurement of the overall amount of light output from a projector. The higher the value, the brighter the picture. Lots of compact, travel projectors are in the 200 to 500 ANSI range.

For real world applications, this means you have more flexibility in when you can use the projector. For instance, if you are showing a movie outside, you could start the film as the sun was setting rather than having to wait for complete darkness. That being said, 600 ANSI lumens still isn’t enough for medium light, so you will still have to close the blinds / curtains if using in a home / office or wait for dusk.

On picture quality, I was thoroughly impressed with the ALPD laser tech. It’s not 4K, but 1080p looks sharp and clear. You can also play 4K content (downscaled to 1080p). The color is excellent, likely due to the brightness levels and HDR 10; extremely accurate compared to my Samsung Q80.

I did a few tests on some of my favorite colorful films (Atomic Blonde, La La Land, How to Train Your Dragon) and the color accuracy was excellent. Of course, you have to make sure you are projecting on the proper background. A projector screen for laser projectors is ideal, but a white wall certainly works in a pinch.

The auto-keystone function and auto-focusing function is perfect for the average user, but anyone that wanted a deep level of manual control could be disappointed. You would need to upgrade to a more advanced projector for that, like the WeMax Nova. However, I doubt that will be a complaint from most users,.

The speaker quality is roughly the same as listening to audio via your smartphone speakers, definitely not ideal if you have a large group of people. It’s fine for dialogue, but loud action scenes are going push the built-in speakers to it’s limits. You are much better off connecting an external speaker via the 3.5mm jack or using a Bluetooth speaker system / headphones.

I tested the internal 39 Wh battery from a full charge to losing power completely. It lasted roughly 83 minutes of constant projection before turning off the 1st time and 77 minutes the 2nd time. Be aware that running off the battery defaults to the power saving mode, thus you are going to see a decrease in the overall brightness level. When the projector is plugged in, it defaults to the standard video mode.

I also tested connecting a power bank to the projector and that also works just fine. If you don’t have access to a AC power source handy, connecting to a power bank will extend your usage time. Of course, that’s another device you will have to haul around in your laptop bag / backpack.

I tested loading up a bunch of movies on a 500GB external drive, popped that into the USB port, and queued those up using VLC. No issues at all. I’d also recommend that option for anyone that’s going to a truly remote location where Wi-Fi or cellular service will be spotty.

Sadly, there’s no Chromecast streaming here. I did test the iOS mirroring with an iPad and iPhone. It worked fine, but stopped mirroring when I attempted to launch Netflix. It is ideal for mirroring web interfaces, especially during a presentation.

The FengOS (Android 9.0) interface is definitely snappy, due to the excellent internal specs on the hardware. You can hop around the interface quickly and jump from different apps / inputs. Regarding apps that did work, YouTube worked perfectly. VLC was great as well.

As mentioned previously, you certainly aren’t locked into Android. I tried both a Roku stick and a Fire TV stick via the HDMI port, each worked like a charm. You will have to remember to bring that extra remote control when traveling though. If I had to add anything the hardware, a 2nd HMDI port would be useful. If I had to add anything to the software, it would be an app store that wasn’t so gosh darn frustrating.

Regarding gaming, I would not use this projector for anything other than casual gaming due to the high input lag. I tried Halo Infinite and Hades, but the lag between the controller movements and what was showing up on the projected image screen was evident in comparison to my main gaming setup (LG C1).

Perhaps Wemax can add a lower lag Game mode with a firmware update in the future. Oddly enough, there’s a game mode in the sound settings, but nothing in the video settings. Of course, if you prefer to play limited action, slower paced games, the input lag probably won’t bother you that much.

I would say the Wemax Go Advanced 300 is definitely more for the business professional than regular consumers. From a business perspective, if you need a portable projector for workplace presentations, this projector should 100% be on your shortlist.

The performance is outstanding considering the size and would allow you to travel with everything you need in a single laptop bag. It’s also incredibly fast to get setup with the auto setup function, just a couple minutes from start to presentation. Mirroring also works as advertised. As mentioned before, you can run it off a power bank, ideal if in an area without power.

One note, if you work in the event space, I’m less inclined to recommend this projector due to the lack of a tripod mount. However, if you have access to a small stand, the projector would be easy to hide in the space (you will need separate speakers for an event though, you can connect up to two BT devices).

From an movie / TV watching consumer perspective, the video quality of the projector is excellent, but I would only pick it up if you plan on going with an alternative streaming stick for the video apps. This version of Android is too frustrating to use for entertainment apps.

The MSRP for the Wemax Go Advanced 300 is $1198, however it launched via crowd-funding significantly under that price. We haven’t seen any discounts on the projector beyond that initial discount. It’s still relatively new though, just officially released during early May 2022.