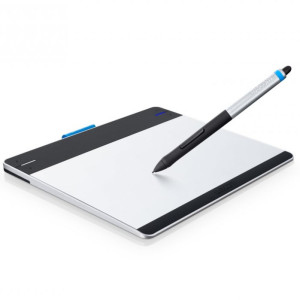 I’ve been using Wacom pen tablets since the first generation Bamboo consumer series tablet (the Bamboo MTE-450). Later I moved on to the 2nd generation Bamboo Pen and Touch tablet (CTH460), which I reviewed back in late 2009. It introduced touch capabilities, although limited, to the traditional Wacom pen input.

The CTH-460 was solid enough that I skipped the third iteration released in 2011 — the Bamboo Capture Pen and Touch (CTH470). The 3rd generation tablet introduced an optional wireless kit which is still regrettably optional in the latest 2013 version that I’m reviewing here. Now known as the Intuos Pen and Touch tablet, it’s available in two sizes: small (CTH480) for $99 and medium (CTH680) for $199. 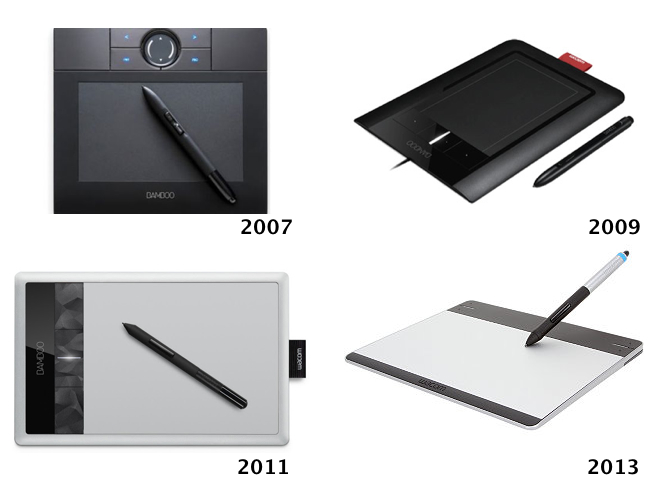 Compared to Wacom’s professional Intuos line, the Bamboo tablets were aimed at mainstream consumers with affordable price tags frequently under $100. For this latest generation, Wacom has merged the naming of the two lines, with the pro versions now designated Intuos Pro (formerly Intuos5).

Aside from the new name, there are variety of mostly subtle but positive changes to Wacom’s entry level pen and touch tablet. In other words, the Intuos Pen and Touch is an evolutionary product, not a revolutionary one, but there’s enough here to appeal to the old users as well as new users.

Like other Wacom products, the unboxing experience is evocative of Apple. Inside the sleek slide-out box with gatefold cover, you’ll find the tablet, pen stylus, micro USB cable with right angle connector and installation disc. You also get an extra stylus band and pen holder in the color black (vs. the default blue).

In the tradition of previous Bamboo pack-ins, there are license keys to some valuable downloadable software: this time, Adobe Photoshop Elements 11 (previous version), Autodesk Sketchbook Express, ArtRage 3 Studio and Nik Color Efex Pro 3 WE6 are included. Plus, there are promotional offers like a coupon code for a free Shutterfly 8 x 8 Photo Book, so all in all the extras feel worthwhile.

The entry level tablets have moved away from a flat form factor and adopted the wedge shape of the pro line. It’s a very subtle incline as opposed to the steeper slope of, say, the Apple wireless trackpad. The bottom lip of the tablet tapers off to a mere 0.2″ thickness, making it very comfortable to rest your wrist on the edge. It’s about 0.4″ on the top end.

The most obvious change has come in the tablet’s size. The width has shrunken down, making it an easier fit on a crowded desk or keyboard tray. It measures 8.3″ x 7.0″, whereas the 2011 model was a longer 10.9″ x 6.9″ and the 2009 model was 9.78″ x 6.9″. Wacom also dropped the left/right orientation by moving the physical buttons back to the top of the tablet where they were located in the first generation Bamboo tablet. The four physical buttons seem easier to press and still feature a small raised dot which helps you find the button without looking. 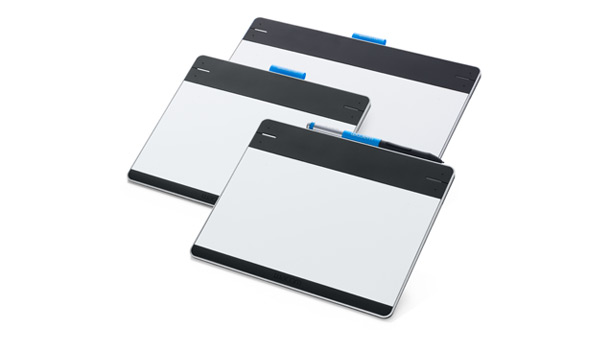 The texture of the touchpad is slightly coarse vs. the smoothness you would find on the Apple wireless trackpad or Macbook Pro trackpad. It’s very responsive and not uncomfortably rough as you move your hand over it. The surface is closer in texture to the coarseness of paper. Since you can also use the touchpad with a pen stylus, this is actually a very good choice.

For me, the biggest improvement over the second generation tablet came in the responsiveness of the touchpad. It now allows for true multi-touch gestures compared to the two-finger limitations of the older model. Its ease of use is equal to the Apple trackpad and, although the gestures differ slightly from standard Apple gestures, they are easy to learn. I found myself using the touch gestures a lot more than on my old Bamboo tablet.

The pen stylus is lighter and narrower this time around, closer in dimensions to a regular pen and easier to hold for longer periods of time. The nib (the plastic tip that makes contact with the tablet) feels slightly squishier or softer now when tapping the surface. Overall, however, I found that these minor changes to the pen were a wash.

It’s still very easy to use the pen as a mouse substitute because the active tablet surface very accurately mapped my dual monitor setup and I was able to move the cursor freely with the pen by hovering it over the surface. Wacom also brought back the “eraser” which was left off the third generation entry level tablet. 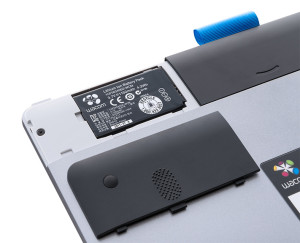 Like the 2011 model, the micro USB cable is detachable, which is a good thing because the included 3-ft. cord is way too short. It’s suitable for plugging into a laptop, but making a connection to a separate desktop PC located farther away is inconvenient. It’s a universal cable, so it’s very easily upgraded — but it’s something to keep in mind.

You still have to pay separately for upgrading to wireless connectivity. The wireless kit (pictured right) will run you $40, which is almost half the price of the tablet. It seems like Wacom could sell the whole package together for around $120 and make people a little happier, but the wireless functionality is not essential. However, we’ve long since moved our keyboards and mice to wireless, so it seems to make sense that the pen tablet should be, as well.

The Intuos Pen and Touch is a worthwhile update to Wacom’s fantastic line of consumer pen and touch tablets. If you’re a new user or picky old user like myself, the fourth generation has enough improvements to make it a good purchase, and I highly recommend it for its versatility as an input device, mouse substitute and, of course, tool for artists and illustrators. Plus, it’s a lot easier to sign your name on PDFs!

Check for Intuos Pen and Touch Deals on Ben’s