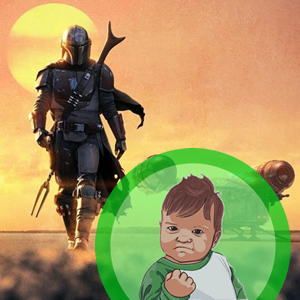 Update [November 15]: We’ve added a brief review of the 2nd episode at the end of this review.

Lucasfilm’s The Mandalorian is by far the most hyped series in the Disney+ rollout (see our review of the service). The two trailers hinted at a gritty Western-style approach to the Star Wars universe from series creator and showrunner Jon Favreau (Iron Man) … hmm, wait a second, wasn’t that George Lucas’s original vision for Star Wars?

Then there’s the main character himself: the Mandalorian. Played by Pedro Pascal (Game of Thrones, Narcos), he looks like Boba Fett from the infamous 1978 Star Wars Holiday Special and sounds like he’s a laconic Clint Eastwood-type from the Sergio Leone Spaghetti Westerns (also like Fett).

In the trailers we also caught glimpses of German director Werner Herzog (filling in the famed foreign actor spot, now a Star Wars cliche), as well as Rocky’s Carl Weathers (another veteran) and Gina Carano.

Bucking trend, Disney is rolling out the first season of The Mandalorian week by week, rather than all at once, so there’s no binge watching. The plan is to keep viewers subscribing, at least for a few months. Plus, on the horizon, there’s the Obi-Wan series starring Ewan McGregor to look forward to…

How does the premiere episode (aka Chapter 1) pan out? Let’s take a look. 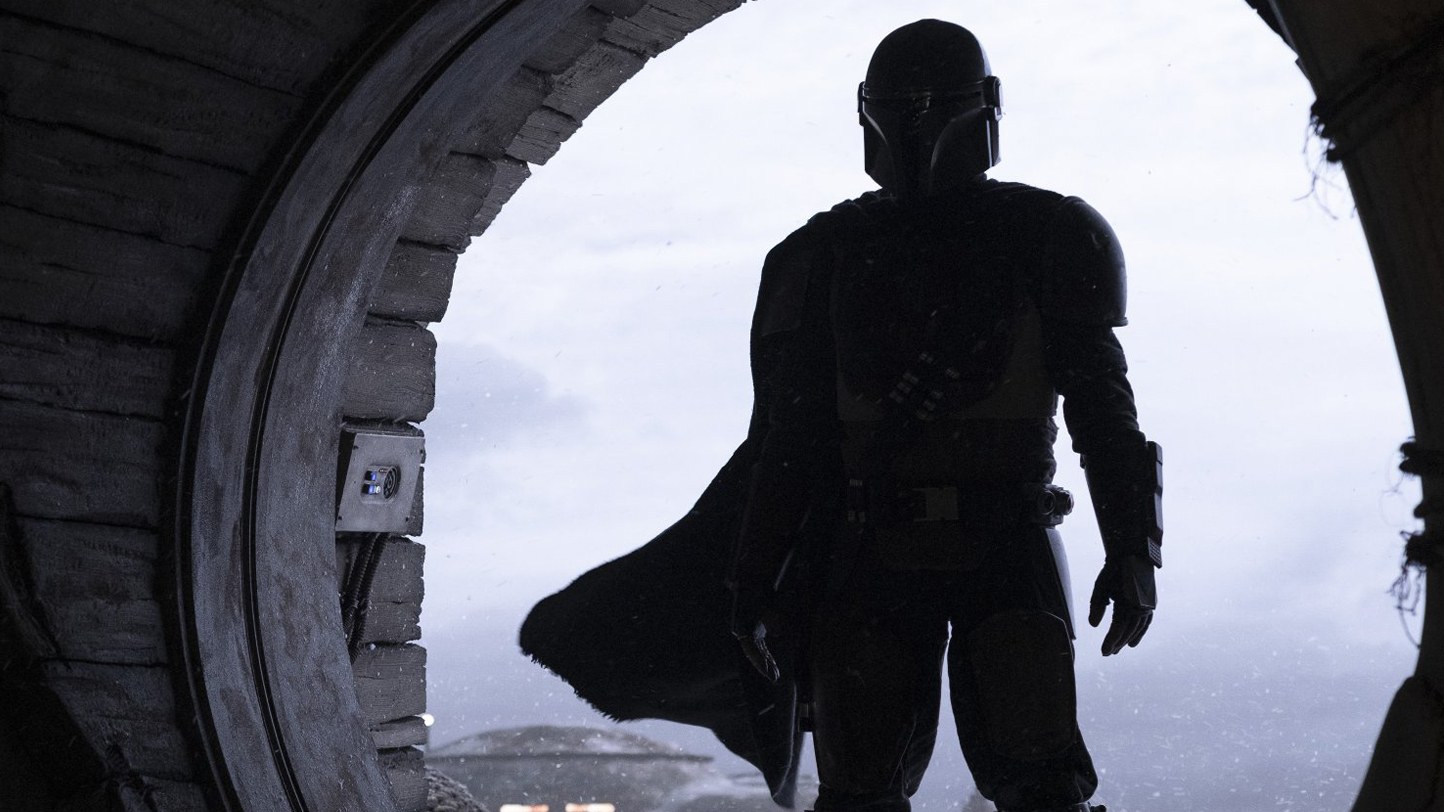 From the the first frame, the Western look of the show is established as the titular Mandalorian bounty hunter (Pedro Pascal) steps onto a solitary snowy plain.  Ludwig Goransson’s score manages to evoke both John Williams / Star Wars and Ennio Morricone / Spaghetti Western-type music.

As soon as the Mandalorian enters an isolated outpost to find his bounty, a blue-gilled alien named Mythrol (Horatio Sanz), you are reminded of Ralph McQuarrie’s early Star Wars cantina concept painting with the Western-style standoff. Throughout the first episode, Favreau & Co. remind viewers of this motif with windmills, wooden fences, windswept plains and bucking , er, Blurrgs (more on those later).

But it’s in the action set pieces where the show’s creators really show off their penchant for the Western genre, particularly the Sergio Leone “Spaghetti” variety.

In the first scene, the Mandalorian shows off his lightning-quick draw and flair with various weapons against would-be assailants (who disparagingly call him a “Mando”). He takes his new prisoner Mythrol on what is essentially a Star Wars Uber ride across an icy plain to his ship, known as the Razor Crest. Designed by well-known Lucasfilm artist Doug Chiang (Star Wars prequels), this cool but dilapidated-looking ship is reminiscent of the iconic Jango/Boba Fett ship, the Slave I.

The Mandalorian rescues Mythrol from an ice creature that’s a cross between the slug in The Empire Strikes Back and a walrus, and they blast off in a classic Star Wars planet exit. That’s the first 7-1/2 minutes of the show.

After he treats Mythrol to a good ol’ carbonite freeze on his ship, the Mandalorian lands on another planet and meets Greef Carga (Carl Weathers) in a cantina that The Force Awakens wishes it had. We quickly find out we’re in the time period after the Empire has fallen (actually 5 years after Return of the Jedi), and that Greef Carga is the head of the Bondsman Guild, basically the Mandalorian’s boss. After the Mandalorian complains about low pay, Greef sends his best bounty hunter on a side job outside the auspices of the guild—a job for a mysterious rich guy.

That mysterious rich guy turns out to be famed German director/actor Werner Herzog, who’s cloistered in a room with four Original Trilogy-style stormtroopers and the Imperial-looking Dr. Pershing. Herzog gives the Mandalorian an ingot of Beskar steel (i.e. the Mandalorian iron used in their armor) as down payment for finding a new bounty. Herzog gives few details, except that he prefers the individual be taken alive and that they’re 50 years old. 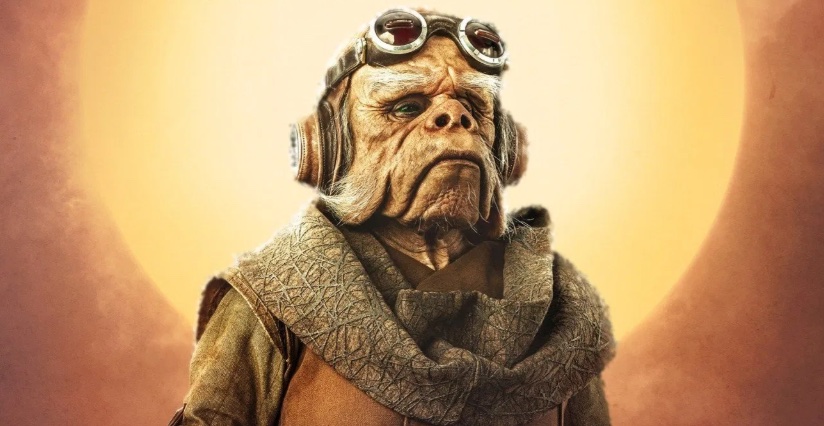 The Mandalorian takes the ingot to a Mandalorian Armorer (Emily Swallow) where we learn he was once a “foundling” and we are treated to a quick-cut montage of him being hidden away as a little boy by his mother and father, who are under attack from off-screen enemies, presumably the Empire. It’s kind of an awkward way to shoehorn in some backstory, but it’s really the only character development we get in this episode. At the end of his visit to the Armorer, the Mandalorian is treated to a new pauldron made from the Beskar ingot.

Moments later, the Mandalorian jets off to a third planet. On a rocky desert landscape, he is greeted by a pair of big-toothed, two-legged, Dewback-looking creatures called Blurrgs who are impervious to his laser weapons and who try to rip him apart. Just before he’s dismembered, he’s saved by an Ugnaut riding another Blurrg.

His rescuer, Kuill the Ugnaut, is played by none other than Nick Nolte, yet another veteran actor (except this time via motion capture). With his signature line “I have spoken,” Kuill is sure to become a favorite in the series.

Here’s Where the Fun Begins

Kuill guides the Mandalorian to a remote compound where his quarry is located. It’s guarded by a collection of what look like hoodlums and criminals from Jabba the Hutt’s palace. I spotted creatures that look like Nikto, Weequay and Squid Head (Tessek). Approaching the compound is IG-11 (voiced by comedian Taika Waititi), who will instantly remind fans of the bounty hunter IG-88 from Empire. This IG-11 also works for the bounty hunter’s guild and steals the show with his comedic timing and one-liners.

The Mandalorian and IG-11 become unlikely allies as they storm the compound, facing off with the various aliens in a frenetic and entertaining Western-style shootout. The scene is by turns funny, tense and exciting and a great introduction to the rest of the series.

Inside the compound, they find the object of the Mandalorian’s quest… but I won’t spoil the surprise for you. 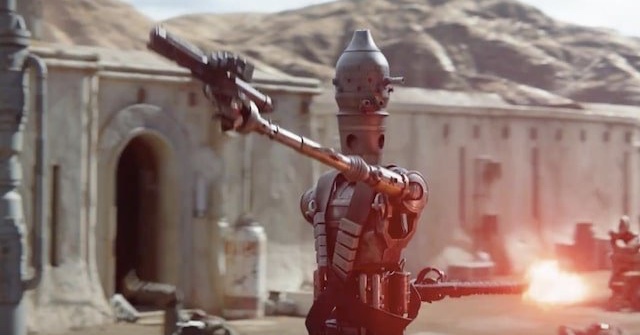 In similar fashion to the Marvel Studios title card, the new animated Star Wars universe logo in the opening titles is a nice touch. The show’s creators have thrown in various OT callbacks that are mostly amusing and not overdone, like a Salacious Crumb creature (Kowakian monkey-lizard) roasting over a fire pit and various Star Wars background characters like Ugnauts (from Empire), the TT-8L gatekeeper droid (think Jabba’s palace in ROTJ) and the Kubaz (that squeaky, hooded and long-snouted creature that spied on Luke in the original Star Wars).

From the brisk 39-minute running time to the PG-rated but gritty feel, it appears that Favreau & Co. have captured the tone of the original Star Wars trilogy that many fans have been clamoring for. It remains to be seen in which direction the show will take the audience, but it’s a positive start.

The next episode premieres this Friday, November 15th, and will then follow a weekly schedule over its 8-episode arc every Friday through December 27th.

Chapter 2: The Child
Written by: Jon Favreau
Directed by: Rick Famuyiwa (The Wood)

The first 10 minutes of the second episode are dialogue-free as we follow the Mandalorian with his precious cargo. It’s a very cinematic approach. The earthy desert color palettes are impressive, and the action sequence with Jawas who’ve ransacked his ship is inventive and touched with light humor.

The Force does make a cameo appearance as the Mandalorian fights a creature called a Mudhorn, but it’s not overdone.

Clocking in at under 30 minutes total, the second episode at times feels a bit like filler for a larger story arc, but the action, humor and character touches get the Star Wars tone right. Plus, we’re getting a distinct sense the Mandalorian is not quite the ruthless mercenary that Boba Fett was…