Launched six years ago, Slacker Radio is one of the older names in a now very crowded digital music service arena, which in recent years has seen upstarts like Spotify (review) and Rdio capture music fans’ attention and splashy new arrivals by big-time players like Apple (iTunes Radio) and Google (Play Music All Access). And don’t forget Pandora, which just happens to be the king of all music services with over 65 million users (2.5 million paid).

Many of these services have a lot in common (including content), and it ultimately comes down to personal taste and listening habits when deciding which one is right for you. All of the services have free ad-supported versions or free trials in addition to their paid subscriptions, so it’s easy to “taste test.” Besides user interface, much of what separates the services is the “predictive algorithm” they use—the technology that creates on-the-fly radio playlists based on an artist, song or album choice.

Sizing Up the Competition

Slacker’s free service offers unlimited streaming with ads on any device, which separates it from competitors like Spotify and Rdio whose free services are bound to the desktop. Beyond computers and smartphones, the list of supported devices for the free version is quite extensive: Sony Smart TVs and Blu-ray players, Xbox, Sonos, Roku and Kindle Fire, among others.

Slacker Radio Plus ($3.99 per month) gives you unlimited song skips, playlists, offline listening for mobile stations and ad-free listening while Slacker Premium ($9.99 per month), which I tested, gives you more offline choices like downloadable albums and playlists and highly desirable on-demand listening similar to Spotify Premium. Due to licensing issues, some songs (e.g. some Beatles or Radiohead) in Slacker’s 13-million-plus song library will not be available on-demand.

A brief look at the competitors: Rdio and Spotify have free and paid tiers similar in price points to Slacker but each boasts 20-million-plus song libraries. The new iTunes Radio is free with ads and has a staggering 27 million songs. (iTunes Match at $25 per year will give you access to your personal song library in the cloud.) With only around one million songs, Pandora is also free with (tons of) ads but offers an ad-free version for $3.99 per month. 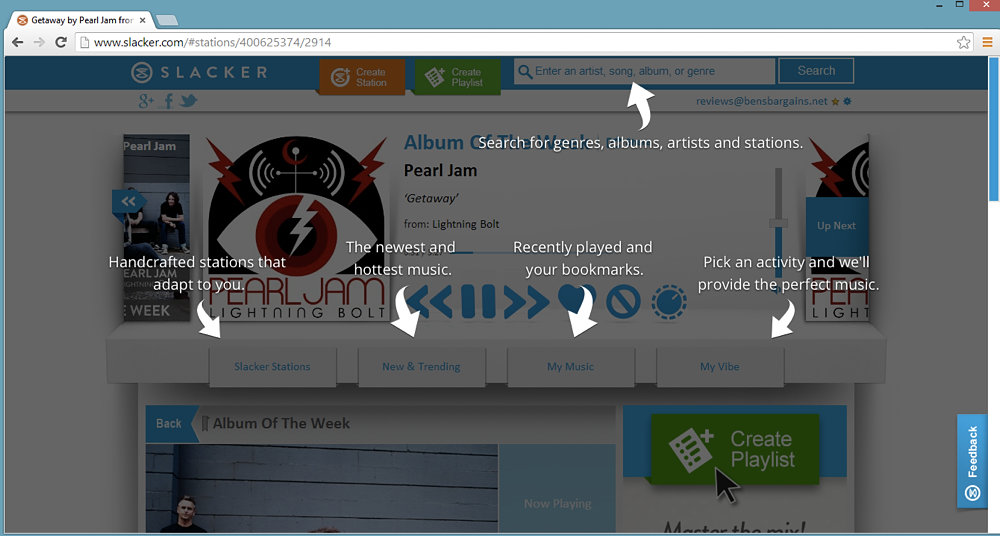 In February of this year, Slacker gave itself a makeover on all platforms. When you first visit its web player, you are greeted with a help overlay that shows you how to use the different play options. In addition to the search field, you are presented with four main tabs under the music player: Slacker Stations, New & Trending (with features like Artist of the Week or Album of the Week such as the newly released Pearl Jam album), My Music (your music history) and My Vibe (picks based on activity).

Slacker is really aiming for a guided user experience with professional DJs—who are brief but informative (and can be switched off)—on featured stations and curated editor picks, as well as original capsule bios and lyrics. There’s a bevy of non-music content like ESPN Radio, ABC News and The Weather Channel under News/Talk/Sports stations. You can even insert hourly ABC News or ESPN updates to your music stations. This kind of content differentiates Slacker from its competitors, and paid subscribers can download these stations for offline listening, which is a cool feature.

There’s a downside to all of this content. Even though the redesigned look is much improved, the browser interface is crowded, and a browser-only experience may not be appealing to all users. One feature lost in the clutter is Fine Tune, a button on the web player that allows you to adjust types of songs on the fly.

Mobile Is Where It’s At

Unless you have unlimited data or or an oversized data plan, offline listening is the most attractive aspect of a paid subscription on Slacker Radio or any of the other competing services. So I tested how easy or difficult it was to listen to offline content on the Slacker mobile app (iPhone in this case). You can select stations (Plus subscriber) and specific albums or playlists (Premium subscriber) for download, but it’s not immediately clear which ones are acceptable to download and how many songs are actually downloaded. Notably, you can only download full albums and not individual songs like you can on Spotify.

The process is not simple. Once you’ve selected a station or album for download by tapping the download symbol, you have to go to My Music on the home page and “refresh” which content to download over Wi-Fi for mobile listening. Just navigating around the mobile app is a frustrating experience at times because it’s not clear which direction you need to swipe or what button to tap. There is no standard slide-out menu that you see on many mobile apps, like Facebook or Spotify, so you end up tapping a lot of back arrows. 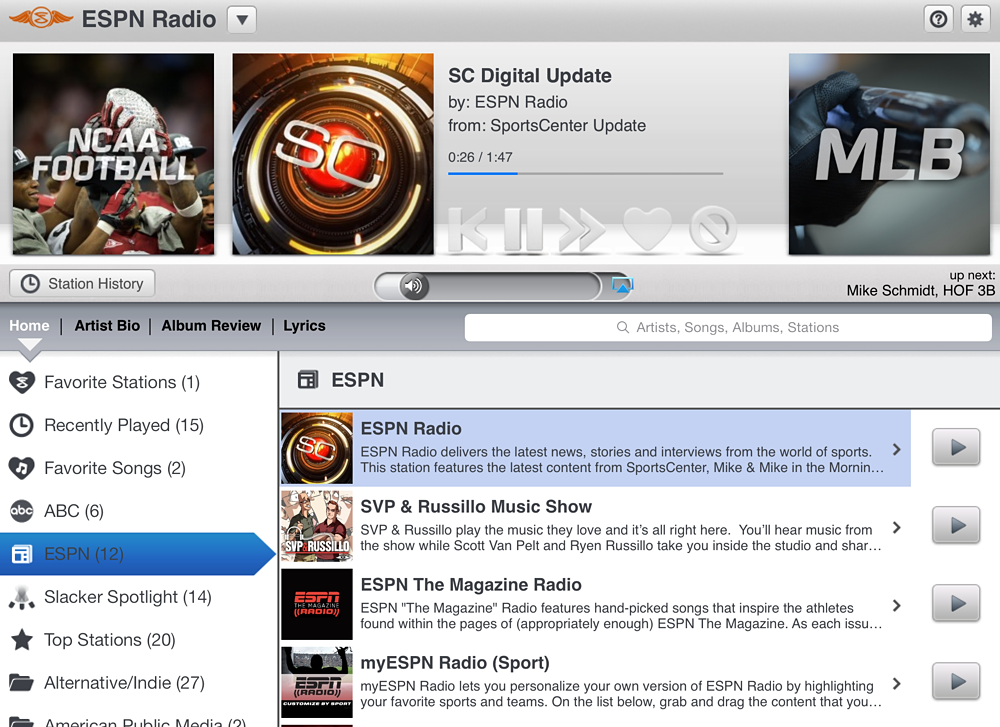 In contrast, the iPad app is an easier and less frustrating experience, but it doesn’t feel as complete as the browser version. The iPad version also allows you to stream Slacker over AirPlay, while the iPhone/iPod touch version doesn’t. On Spotify, AirPlay is available on both the iPad and iPhone.

Free Slacker Radio is very competitive with the other free digital music services because you can listen to it on any device and it offers additional non-music content for users with various interests. You also get the curated stations and DJs, which add value. On the other hand, Rdio and Spotify have stronger social media integration with more crowdsourced content. The new kid on the block, iTunes Radio, has double the number of songs and an easier-to-use UI (as per Apple) but a lot less features and non-music content.

At $3.99 per month, Slacker Radio Plus is a good deal, competitive with the paid Pandora service at $3.99 (which has far less songs and curated content) and cheaper than the mid-tier Spotify subscription at $4.99. However, Slacker Premium at $9.99 per month offers less value than Spotify Premium (also $9.99), which gives the user a lot more flexibility with on-demand, offline content and a better mobile experience.

Slacker is definitely worth a spin for Pandora users, but if you’re already paying for another music service, Slacker may not have enough to draw you away.