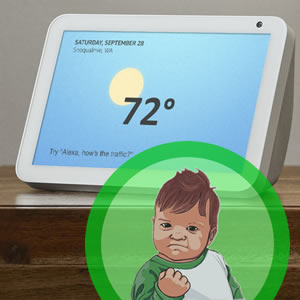 The Echo Show 8’s tubby wedge shape is not the most inspiring form factor and won’t win any design awards, but like many of Amazon’s devices, it’s workmanlike and gets the job done at a reasonable price. Plus, at this size (7.9″ x 5.4″ x 3.9″), it’s a natural fit on a kitchen counter or bedroom nightstand (and available in your choice of charcoal or sandstone, i.e. black or white in normal-speak).

Its closest competitors, the 7-inch Google Nest Hub ($129) and 8-inch Facebook Portal Mini ($130) might look more appealing, design-wise, to many prospective buyers. The latter even has built-in Alexa. So, does the Echo Show 8 have enough to stand out amongst the competition? Let’s take a closer look…

The Display Has It 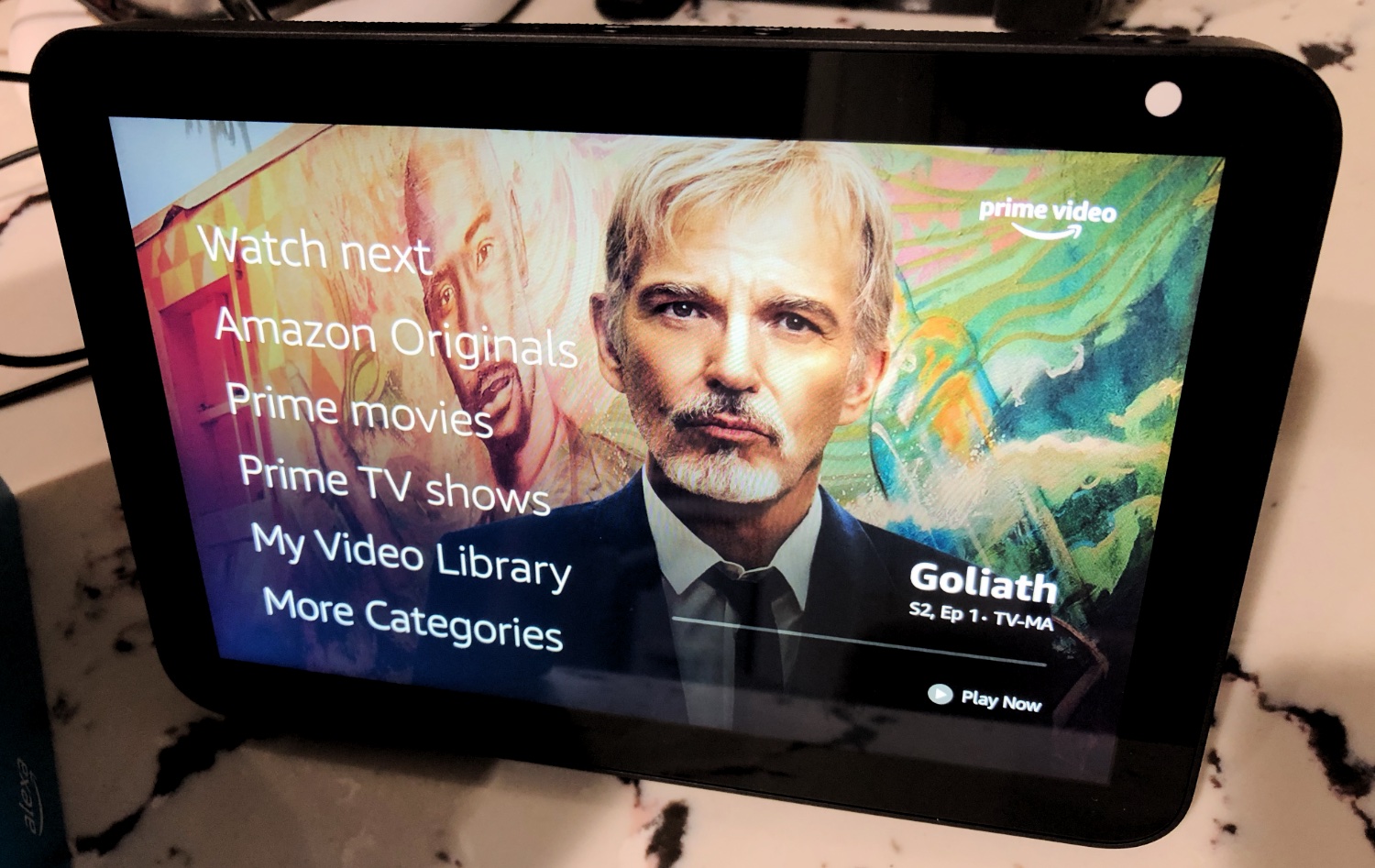 While it hasn’t always been the case for me with other Amazon devices, the setup for the Echo Show 8 was actually very fast and quite painless. I attribute that to the display, because going through the setup steps directly on the device was much easier than having to do it on a phone via the Alexa app.

I could also see that the display allows the Echo to (possibly) realize its full potential as a smart home hub (though it does not have a dedicated Zigbee smart home hub like the 10-inch model). With a quick swipe left to the shortcuts menu, you can access “Smart Home” and quickly see the status of all of your smart home devices. With the traditional Echo smart speaker, you either have to remember them—which is fine until you start accumulating a bunch of these devices—or you check the app on your phone.

Anyway, the setup took just a few minutes: I entered the password for my Wi-Fi network, linked my Amazon account, selected a time zone, and chose a screensaver (an expected but well-executed feature). At the end, Alexa pronounced, “This device is ready.” 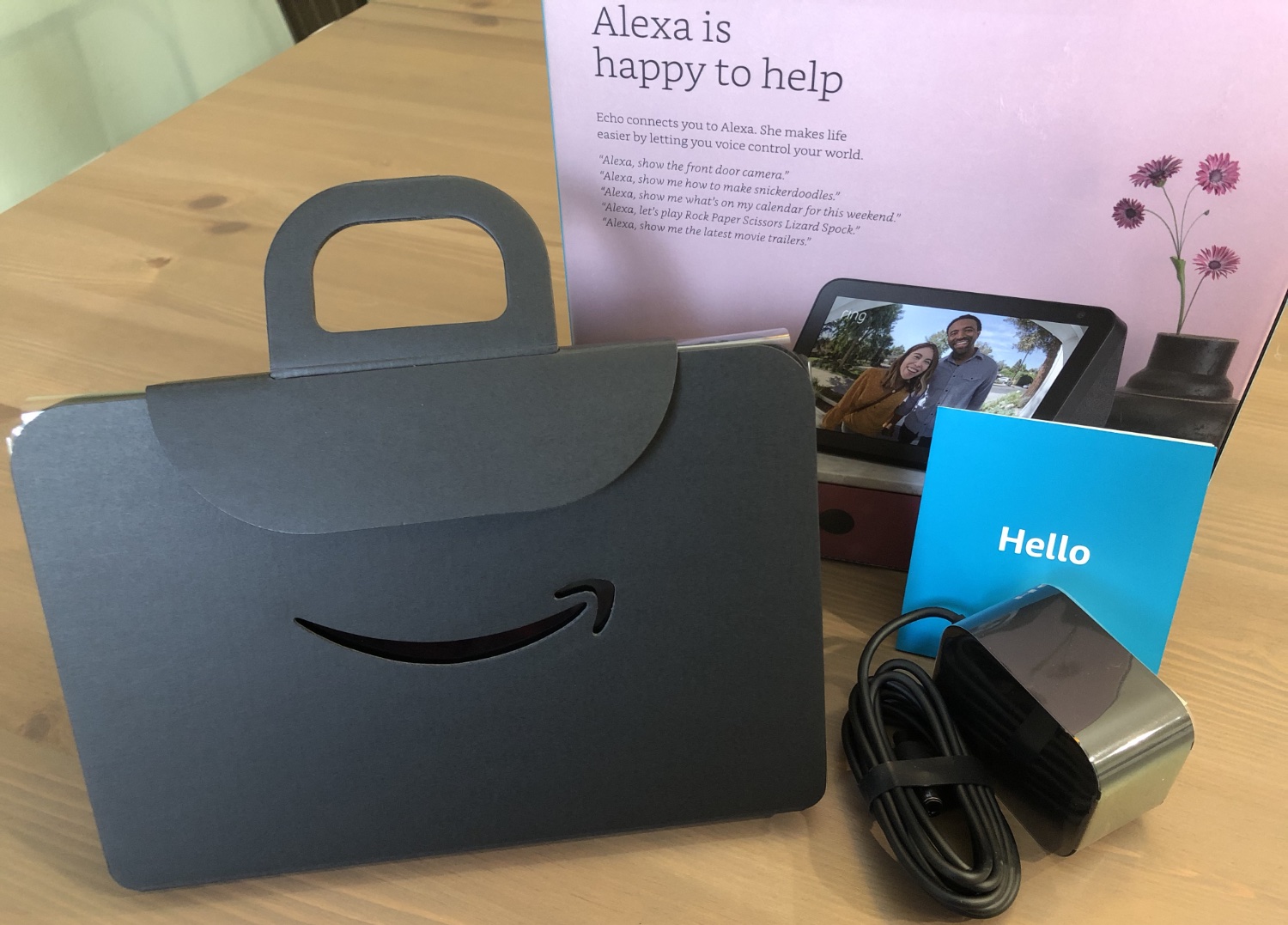 As I stepped back to observe the Show 8 scrolling through news, weather and Alexa suggestions, I noticed what a terrible fingerprint magnet the display and bezels are. No fancy Apple-style oleophobic coating here, apparently.

Font size is comfortably readable from a distance, like 6 to 8 ft. away, say if you’re moving around in a kitchen or bedroom. You can’t adjust font size, however, or how elements are laid out in the home screen.

The rubber base is reliably grippy, so it won’t be knocked off a counter or nightstand easily. Plus, the Echo Show 8 has a heft to it (2.2 pounds) that also helps its balance, compared to the lighter tablet/picture frame form factors of its competitors.

You’re stuck with the display angle unless you want to buy Amazon’s separate adjustable stand for $25. The viewing angles aren’t bad, but straight on is still best. The resolution is 1280 by 800 which looks fairly sharp on the 8-inch display, and colors are okay. Could the display have been better? Definitely yes, but not at this price point.

I liked how the the display automatically switched to an old school LED clock when I turned off the lights. (You can also turn off that setting, which is called “Night Mode.”) 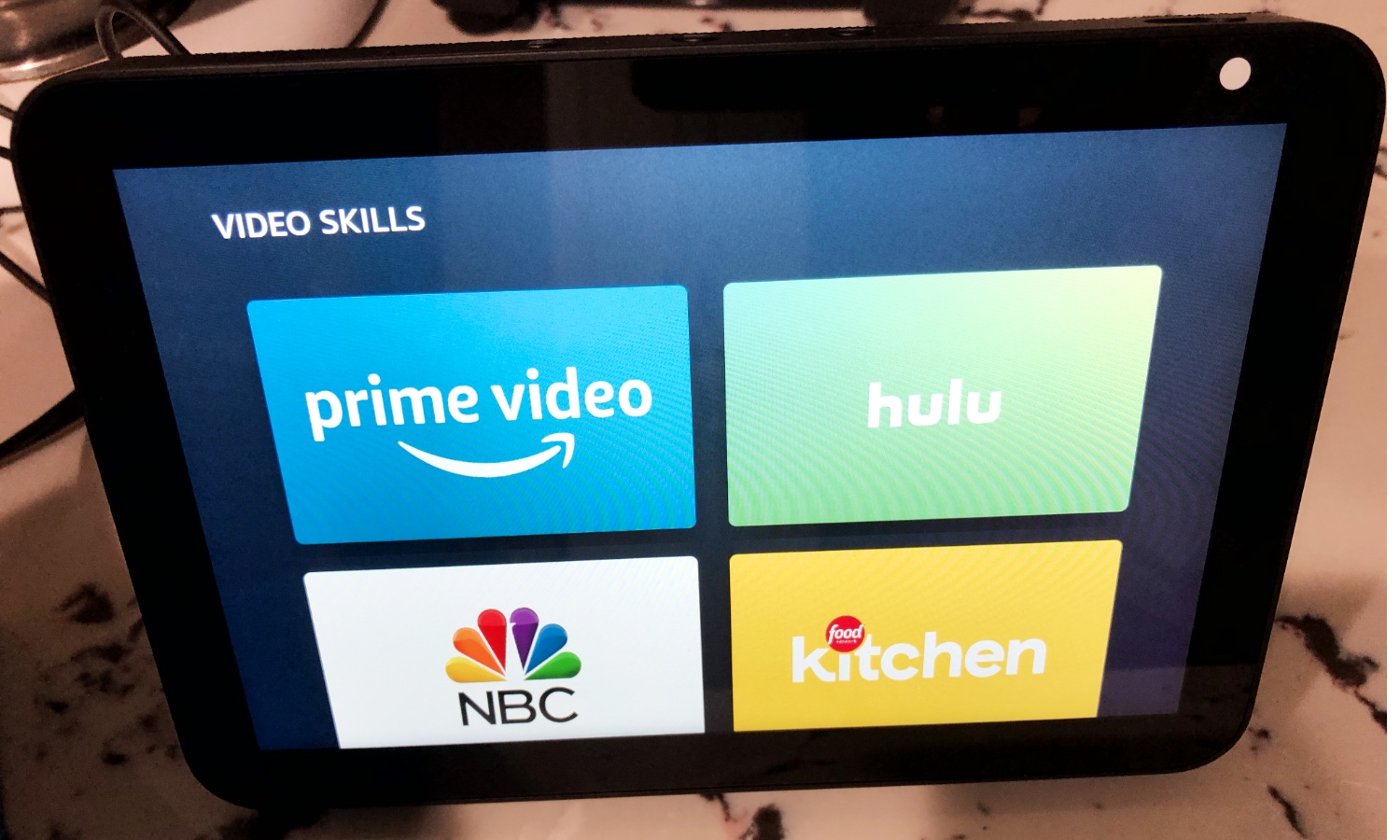 When you swipe left for shortcuts, you can open up video and music options. Video is pretty limited. You get your choice of Prime Video, Hulu, NBC, Food Network Kitchen and Tubi (whatever that is). The apps are pared down versions of what you might find on a regular streaming device, but could be worse.

What’s missing? Chiefly, YouTube and Netflix, among others. Although Amazon and Google made nice earlier this year, the absence of a dedicated YouTube video app on the Echo Show 8 is quite glaring. I accessed YouTube via the Show 8’s slow Firefox browser, and let’s just say… it was not the most user friendly experience.

On that note, the Show 8 runs on the same Mediatek 8163 processor found in the Fire HD 8 tablet, and at times, it’s a bit sluggish. Not to say that the CPU destroys the entire user experience, but it’s also not the fastest draw in the West. I was frequently greeted by “Loading” messages. However, Alexa herself is as peppy as on other devices, and the Show 8 sometimes includes illustrations or images with her responses. 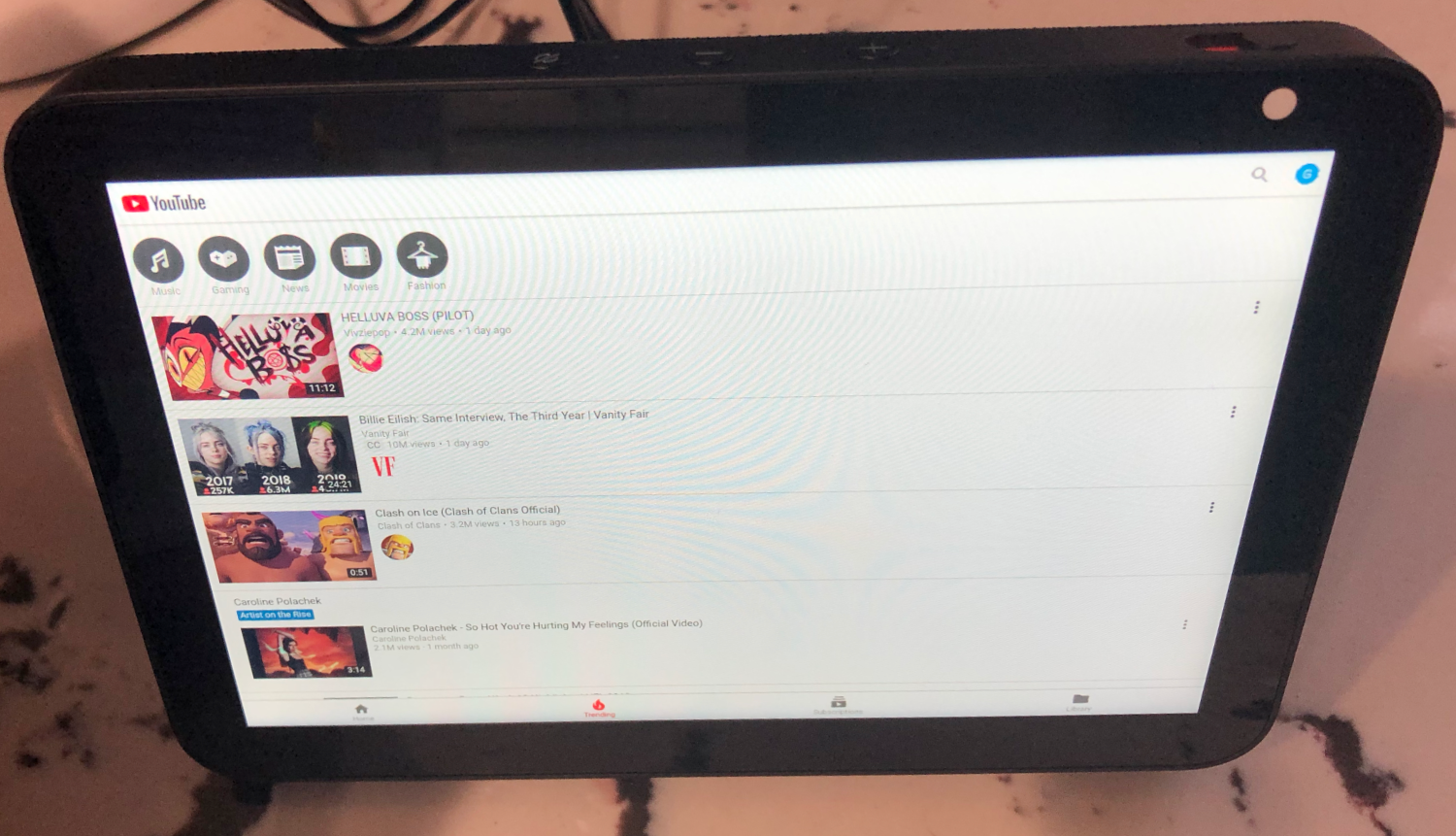 The sound is a bit bass-heavy at first, probably because the Show 8’s two side speakers and passive bass radiator are sitting so close to the surface—in my case, the kitchen counter. It was easy to ask Alexa to turn down the bass (you can also do it from the settings menu or the Alexa app).

Because the speakers capture some low end, the sound is decent overall, but I wasn’t a fan of how the speakers are arrayed on the side and back. Amazon wanted to get away from the clunky look of the 1st gen Echo Show’s bottom-mounted speakers, but I think the 360-degree speakers on the Echo and 3rd Gen Echo Dot sound better overall.

When you play music on the Echo Show 8, the lyrics will roll up on screen (if available). Fun for kids and adults with bad memory.

Unlike Facebook Portal, the camera on the Echo Show 8 will not follow you as you move around, so you should find a good place to talk or hunch over uncomfortably. 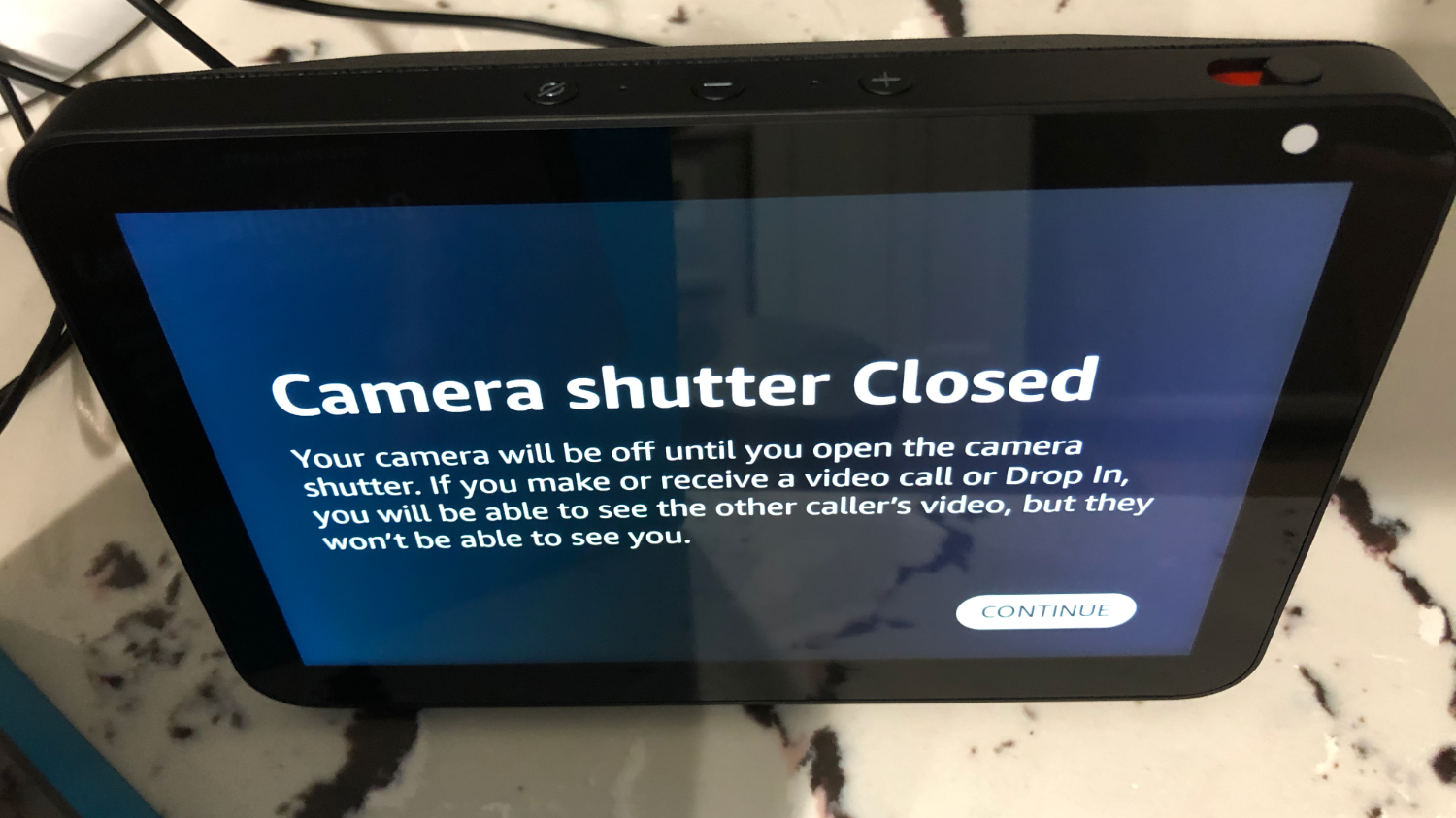 Speaking of the camera, there’s an actual physical shutter that you can slide in front of the lens. That’s in addition to being able to turn off the camera and mics with a button. That should bring some peace of mind to privacy-minded users.

Using Alexa Skills on the Alexa app, I’m able to view my Arlo smart home security cameras on the Echo Show 8. That setup process took just a few minutes, and you can also do this with Ring, Nest and other smart home devices.

This kind of smart home capability with the display really opens up potential for the Echo Show 8 as a powerful way to monitor your devices without having to use a phone. 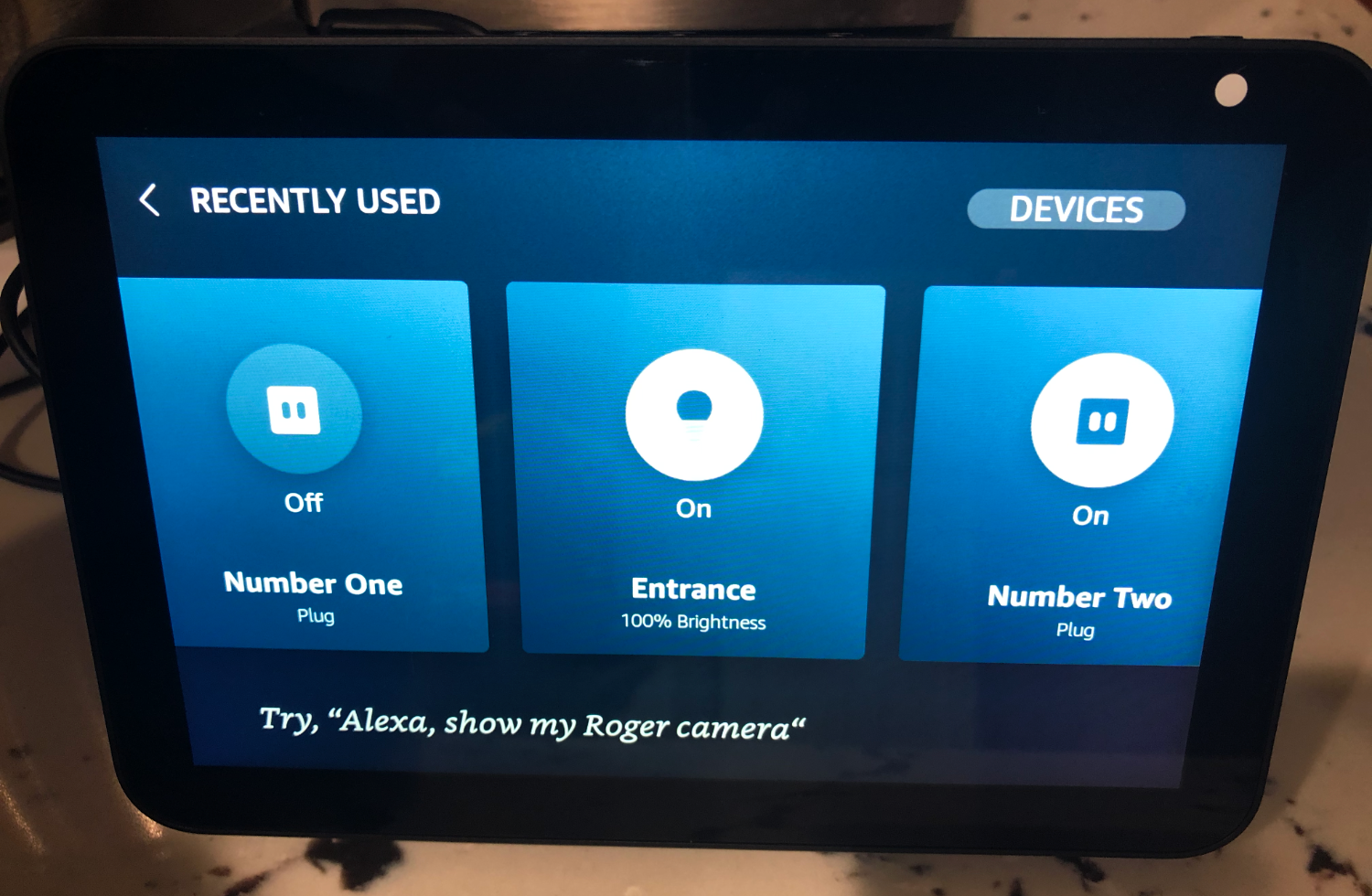 The Echo Show 8 grew on me. Yes, it’s rather utilitarian, and it’s not a premium-looking device that will make you ooh and aah.  Still, it was handy to glance at its display for the time, weather and sports scores. The Show 8 is small enough to fit on a nightstand but big enough to be visible in a kitchen or living room. Its sound is good enough to act as a standalone speaker, and its display makes it a useful smart home hub.

I’d like to see more Alexa skills specifically configured for the Echo Show smart displays rather than just the audio-only Echo speakers. Maybe those will come in time.

At a sale price of $100 or less, the price of the Echo Show 8 is well in the range of the standard Echo speaker and that makes it a good value overall.