Waste Not, Want Not: Best Deals to Buy in September 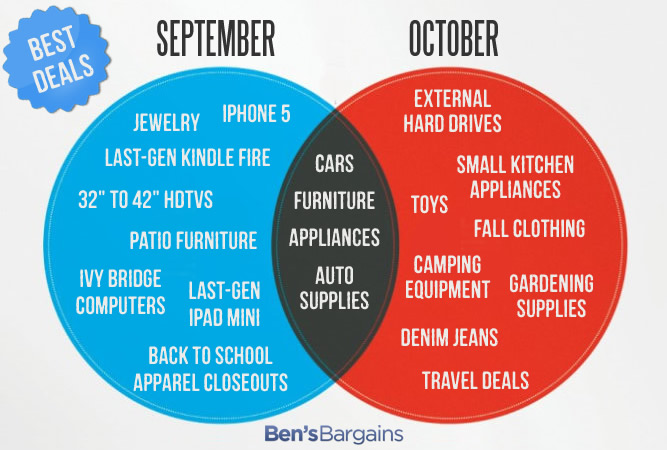 Labor Day is September 1st this year, kicking off the unofficial start of fall and typically bringing with it a rash of Labor Day / End of Summer sales.

At Ben’s Bargains, there are a lot of great deals throughout the year, but some patterns do appear. For example, bedding and mattress sales abound during and after Labor Day. Aside from the usual department stores like Macy’s, JCPenney and Kohl’s having bedding sales, watch for good deals on sheets, comforters and pillows from sites like Tanga, 1SaleADay, Woot! and Groupon.

Here are other deals to watch for in September:

Get Ready for iPhone 5S Discounts

Apple is expected to announce its latest iPhone, likely two different screen sizes, on September 9th. Typically, Apple drops the price of their previous generation iPhone, in this case the iPhone 5S, by $100 and the two-year-old phone (the iPhone 5 or 5C) by $200.

In other words, the iPhone 5 or 5C could be free with a 2-year contract if previous years are any indication. You can also take advantage of Apple’s trade-in program in order to get credit for your old iPhone at Apple stores. Or you can sell it on an auction site like eBay.

In addition, a free firmware update will be released on September 10th. Rather than design changes, Apple is focusing on new features in this version of iOS 8. Those features include a revision to the Photos and Messages app, improved notification interaction, a smarter keyboard, family file sharing and a fitness dashboard for tracking your health. You can read more about these features here.

So if you pick up an iPhone 5S at a discounted price, you will likely be able to take advantage of all the new features. Be aware that Apple generally limits features in older generations of the iPhone, thus the iPhone 5 and 5C may run into issues when running iOS 8.

But Don’t Forget About the Tablets

September has also meant new Kindles from Amazon in previous years as well as other manufacturers. Expect updates Samsung’s line of tablets as well as the Google Nexus and possibly the Kindle Fire. A new iPad release is also possible as the rumored update to the iPad Air could be announced as early as September 9th. 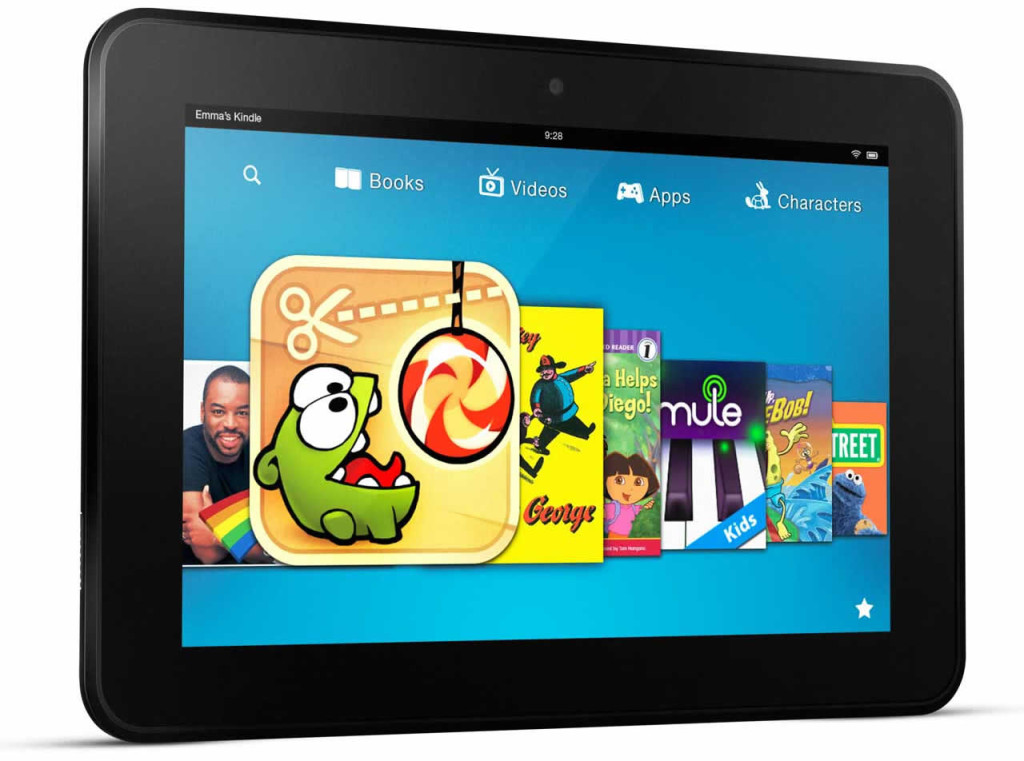 Summer is Over, School is in Session

If you’ve waited till now to buy Back to School stuff, you’ll actually be able to pick up some pretty good deals since retailers are trying to clear out the rest of their stock. Retailers aimed at kids and teens like The Children’s Place and Aeropostale started slashing prices in late August and will continue into September.

Seasonal items like patio furniture and sunglasses will see further price reductions in September. Kmart has already started an end of season clearance sale on patio furniture with reductions up to 70% off. As the days get shorter, September is a good time to stock up on some shades. You should see more sunglasses deals from sites like Oakley Vault, Groupon, 1SaleADay, 13 Deals and Sunglass Hut.

Home is Where the Deals Are

A lot of babies are born in September. It’s usually the number one or number two highest birth rate month of the year. Babies R Us on eBay has started a huge clearance sale on over 1800 baby and kids’ apparel items. Amazon is a good site for stroller deals as well as baby monitors.

Furniture and appliance deals will also be plentiful in late September as retailers move new models and styles into stores. In late August, Target started a big furniture sale with 20% off furniture orders plus a $10 off $50 coupon code.  Be aware that these sales get more aggressive as the year wears on, typically tipping during November into Black Friday sales.

Don’t Get Sucked into Black Friday Just Yet

As we look into the fall months, there is a tendency to wait it out for Black Friday deals on tech products. However, September has traditionally been a good time for laptop deals and extremely good for desktop deals. If you are in the market for an all-in-one design or simply the traditional setup, you are likely to find desktop deals that rival what you can score during Black Friday sales.

Apple released the newest Macbook models in June. Although a few retailers dropped the price of the new models for a few days in August, expect to see price drops on Fall 2013 models at sites like MacMall and Amazon and good deals on refurbished 2013 models at Apple Store.

Beyond computers, there are also heavy discounts on televisions during September, specifically due to the kickoff of the college and professional football seasons. While you will find doorbusters during Black Friday that are more aggressive, the majority of regular Black Friday sales are on par with television deals during September.

If you are in the market for something larger, look to plasma televisions in the 55-inch to 65-inch range for the best deals during September. However, if you’re interested in LED or 3D televisions, it’s best to wait until early November to start taking advantage of more aggressive deals.

Head to the Dealership this Fall

Since the 2015 models of new cars hit the lots during early September, hitting the car lot in late September and beyond will put you in an excellent negotiating position for the current stock of older models. Discounts usually start around 10 to 15 percent and dealers are more flexible during the purchase process when haggling over the price. These base discounts increase over the following months, but stock on older models also dwindles as 2014 comes to a close.

Check out one of our sister sites, CarsDirect, for auto deals in your area.

In addition, September is a killer month for deals on auto supplies according to our sales data. If you are working on an older car and need to pick up a small set of tools or parts, look for Labor Day discounts as well as other sales throughout the month.  If you’re looking for a larger set of tools, it’s best to wait until the Black Friday sales period to get the best deals.

There are six terrible months to purchase jewelry and six months you will find the best deals. August and September are in the latter category due to the lack of a major buying holiday. If you start shopping for a shiny Christmas gift now, you’ll save significantly more compared to the final three months of the year. Jewelry sales traditionally bottom out in September and jewelers are more open to price negotiation. Online jewelry sales are also more aggressive.

If you want to make sure you don’t miss any upcoming  September deals on Ben’s Bargains, don’t forget to set up deal alerts (registration required). You’ll receive an instant email and get the first chance to jump on a great deal before it disappears. And the best deals are gone fast!