Ben’s on the Road: Disneyland!

Yesterday, after 2,000 miles and a week on the road, we made it to Disneyland! It was crowded, it was hot, it was crazy expensive…but man it was fun! We hit it hard for about 12 hours and were able to experience all the rides I’ve been wanting to go on since I was a kid: Space Mountain, Pirates of the Caribbean, the Teacups, Indiana Jones. Like they say, dreams do come true!

This was our first time doing Disney, and while I’m certainly no expert yet, we did learn some good tips and tricks for making the most of our limited time and budget. Here are some of them:

What did people do before smartphones?! Certainly not enjoy their first time at Disney, because without the Disneyland app, I’d have been completely lost and overwhelmed with this place!

Before you go, set up an account and buy your tickets right from the app. I asked around, read all sorts of stuff online, and there’s really no legit way to get discounted Disneyland tickets, unless you’re willing to “borrow” some random person from Craigslists’ season passes for a fee, which you know, doesn’t sound like a great idea. When we got to the park entrance, there was a huge line at the ticket booth, but if you purchased tickets from the app, you could go right up to the entrance and they just scanned a barcode from your phone. Trust me, there are plenty of lines inside the park; you don’t want to add to it before you even get in! 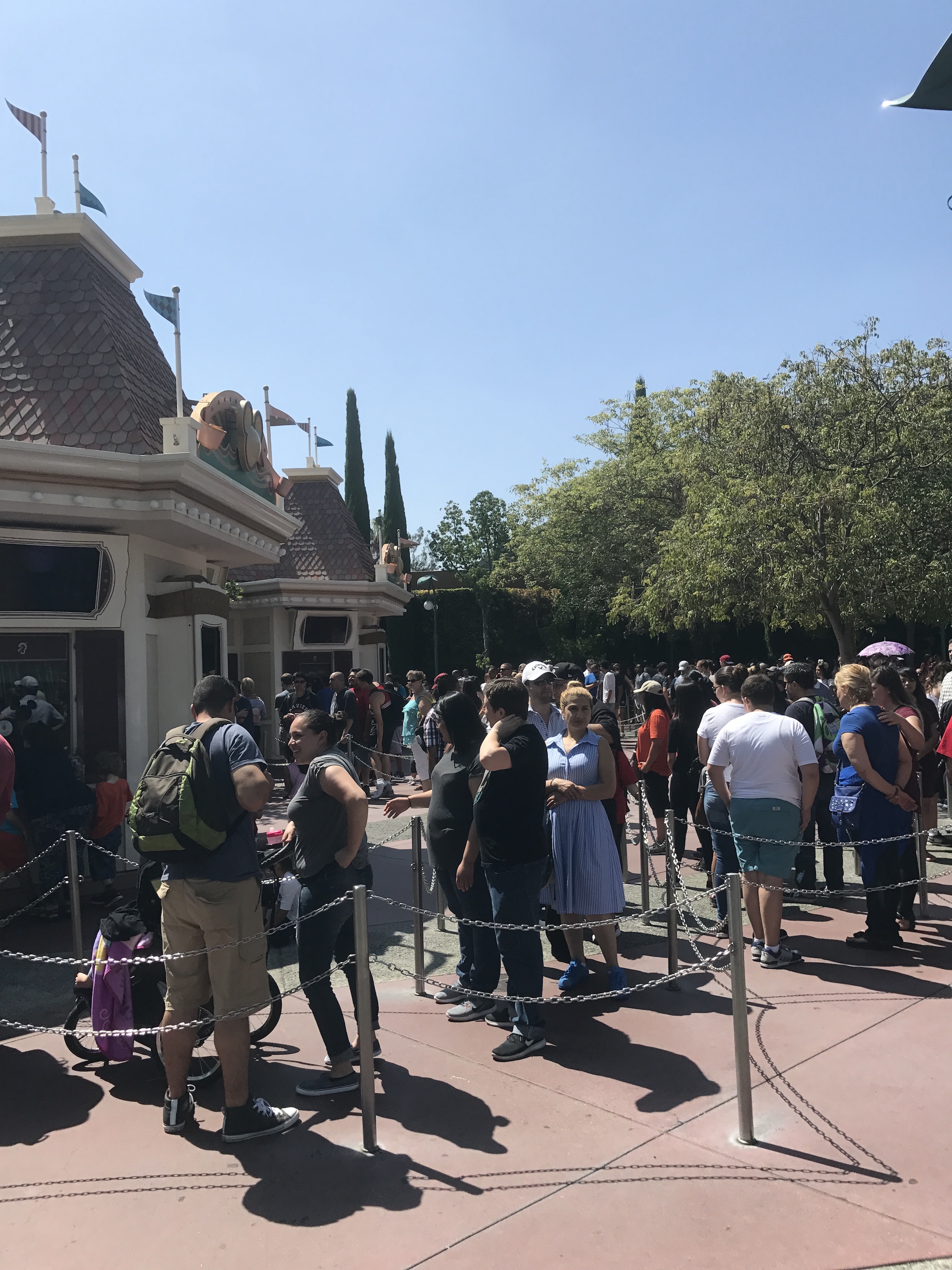 Another nice thing about the app is that it shows you the approximate wait times for the rides around you. I didn’t find it to be completely accurate, but it was super helpful just to gauge what had a “short” wait vs a “long” wait; if something said it had a 15 minute wait, we knew it’d be under 30 minutes, where a ride with a listed 50 minute wait was one we’d for sure want to set up a FastPass for (see below!). 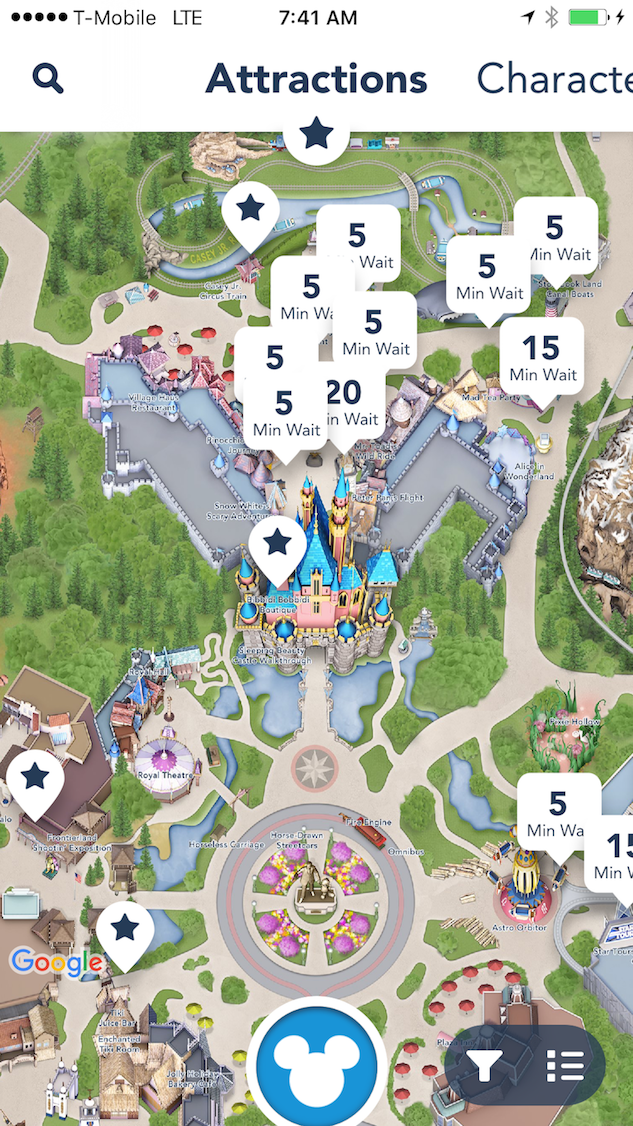 Pay extra for the MaxPass Tickets

Apparently this is a new thing (July 2017), but you can pay an extra $10 per ticket for the MaxPass experience. Basically, it allows you to sign up for FastPasses from the Disneyland app, and it also gives you unlimited PhotoPass downloads for your stay. It was totally worth it in my opinion! FastPasses allow you to skip to the front of the line on popular rides, and without the MaxPass thing, you have to actually show up at the rides, get a physical FastPass ticket, then arrive back again at your designated time. MaxPass allows you to sign up for FastPasses from your phone, from anywhere, which is obviously much easier!

The PhotoPass thing was actually pretty amazing too. Throughout the park there are Disney photographers who take pictures for you, and if you have the PhotoPass, they scan a barcode on your phone, and the pictures show up on the app. Then you can save them, share them, etc, for free! 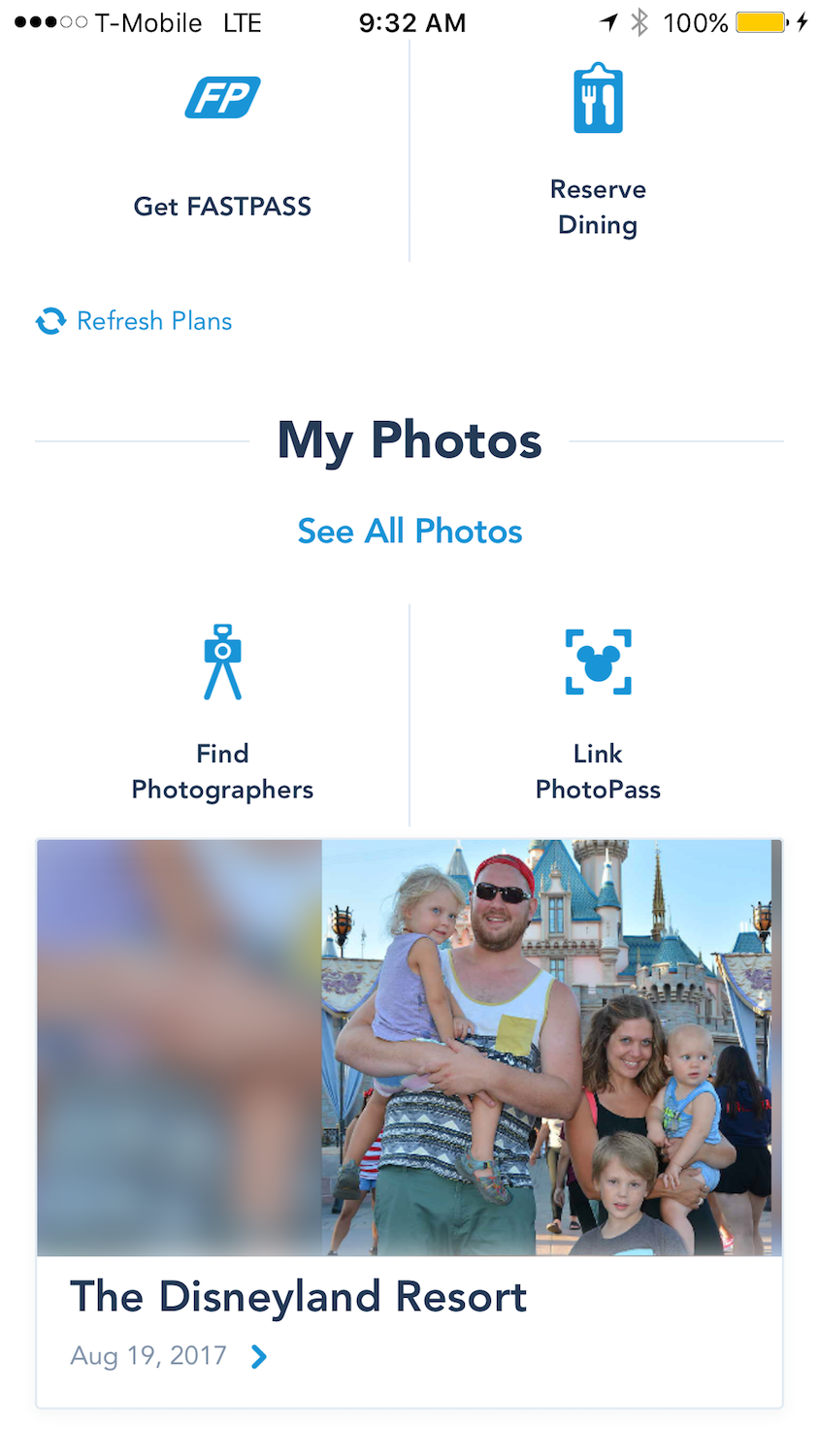 Honestly, I can’t remember the last time we got a family picture that wasn’t a selfie. It was really awesome that we could ask one of the Disney photogs to take our picture and it just showed up a few minutes later on my phone! They were located at the castle, all of the character meet & greets, and other popular photo spots. When you’re already paying $100+ a ticket, adding another $10 for this plus the mobile FastPasses really seems like a no-brainer to me.

Buy Disney Souvenirs and Pins Before You Go

My parents went to Disney World a couple months ago and gave us this great tip: buy trading pins on eBay before your trip. No idea what trading pins are? That’s okay, neither did I, but it’s definitely a thing! Basically, people trade officially licensed Disney pins with the cast members at Disneyland; if someone working at the park has a pin you like, they have to trade you for it if you ask them to. You can purchase these pins inside the park (for a lot of money of course), but you can also just buy big lots of them on eBay for super cheap. We bought 25 for around $12 before we left. We divided them up and put them on lanyards, and the kids had a lot of fun trading them for new ones during our day at Disney. 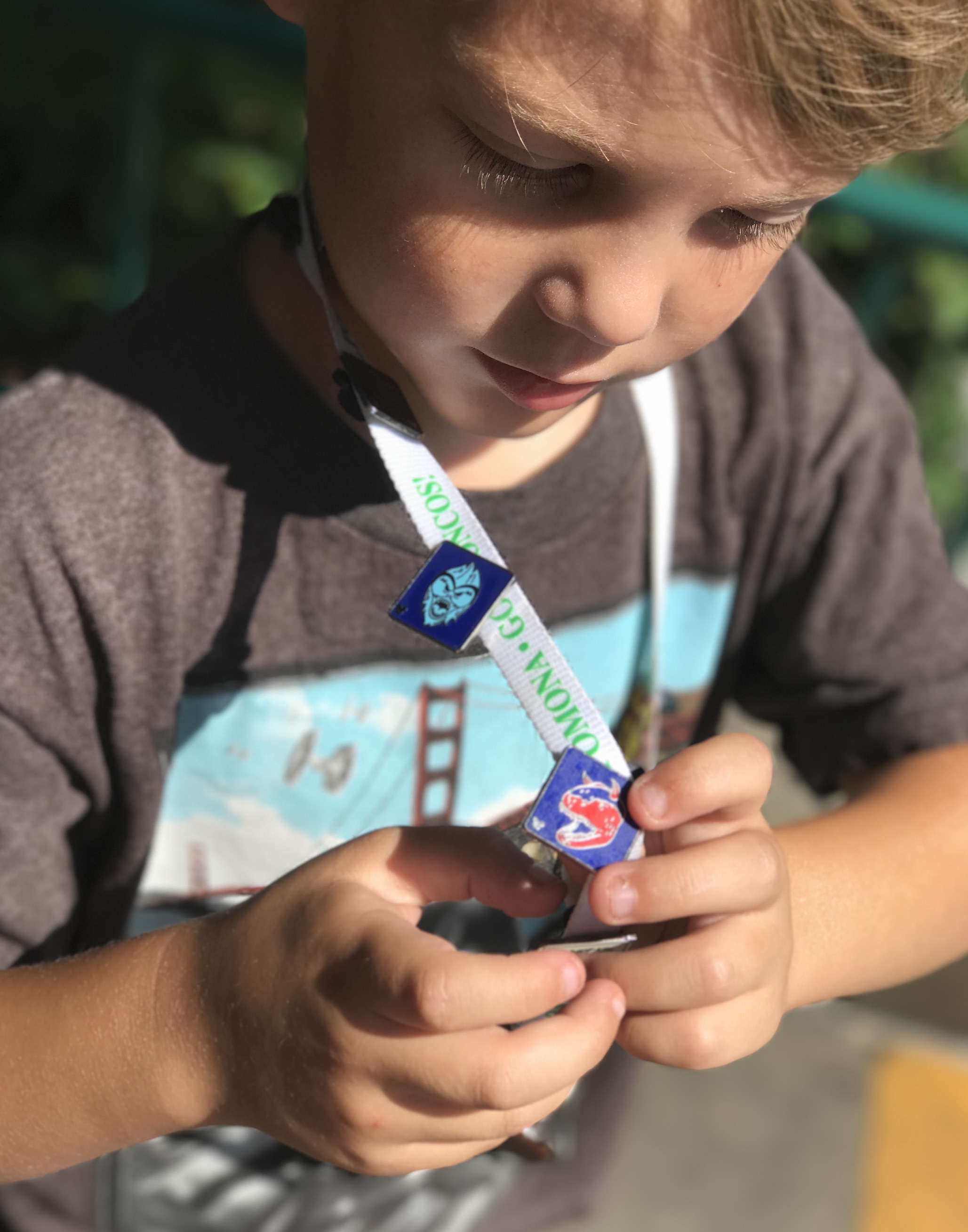 This may sound weird, but we also bought the kids some “souvenirs” before we even got to Disneyland. I knew my daughter was going to want something Moana-related, so the night before we went, we gave her a  Moana Heart of Te Fititi necklace that we bought from Walmart for $5. Same necklace will cost you $20 inside Disney! So many of the stuffed animals, costumes, toys, etc, you can find at Target, Walmart, or Amazon for so much less. Just secretly pack them into your backpack and pull them out inside the park of you want to save some money!

Do the Jedi Training!

I’m a pretty big Star Wars nerd. So when I heard there was a “Jedi training” kids could do, I knew we had to do it. It’s about an hour time commitment, but it was super awesome. Definitely a highlight of the day! 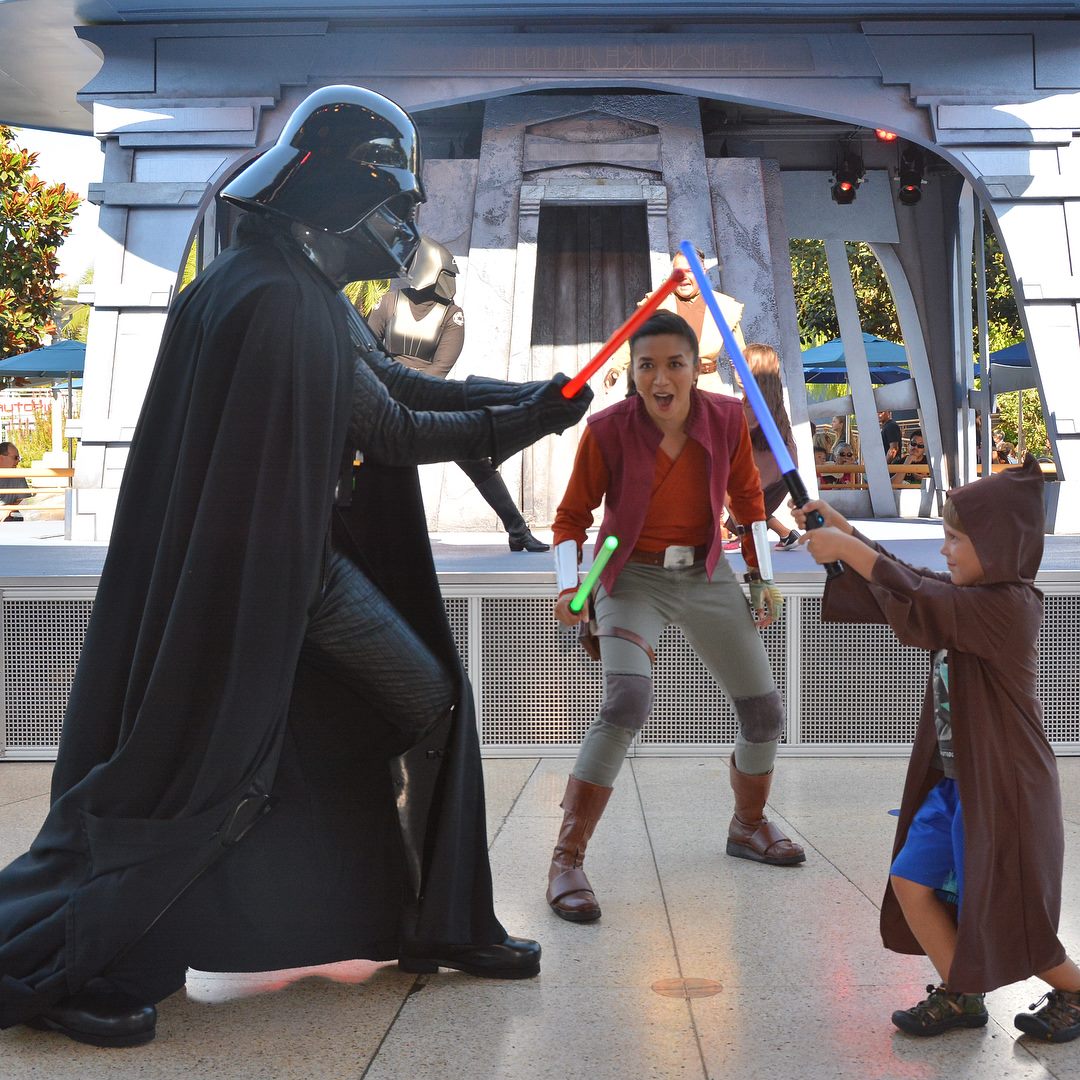 Kids have to be at least four years old (bummer for my 3 year old daughter!), and you have to pre-register. You sign up at the Star Wars Launch Bay entrance in Tomorrowland for the time slot of your choice. Everyone said spots go super fast, but we showed up at around 1PM and there were plenty of tickets left for the 4:30 slot. The whole experience was super fun, and my son was beaming for hours after it was over. They even get a cool “Future of the force” button at the end, and the whole thing doesn’t cost any extra money! 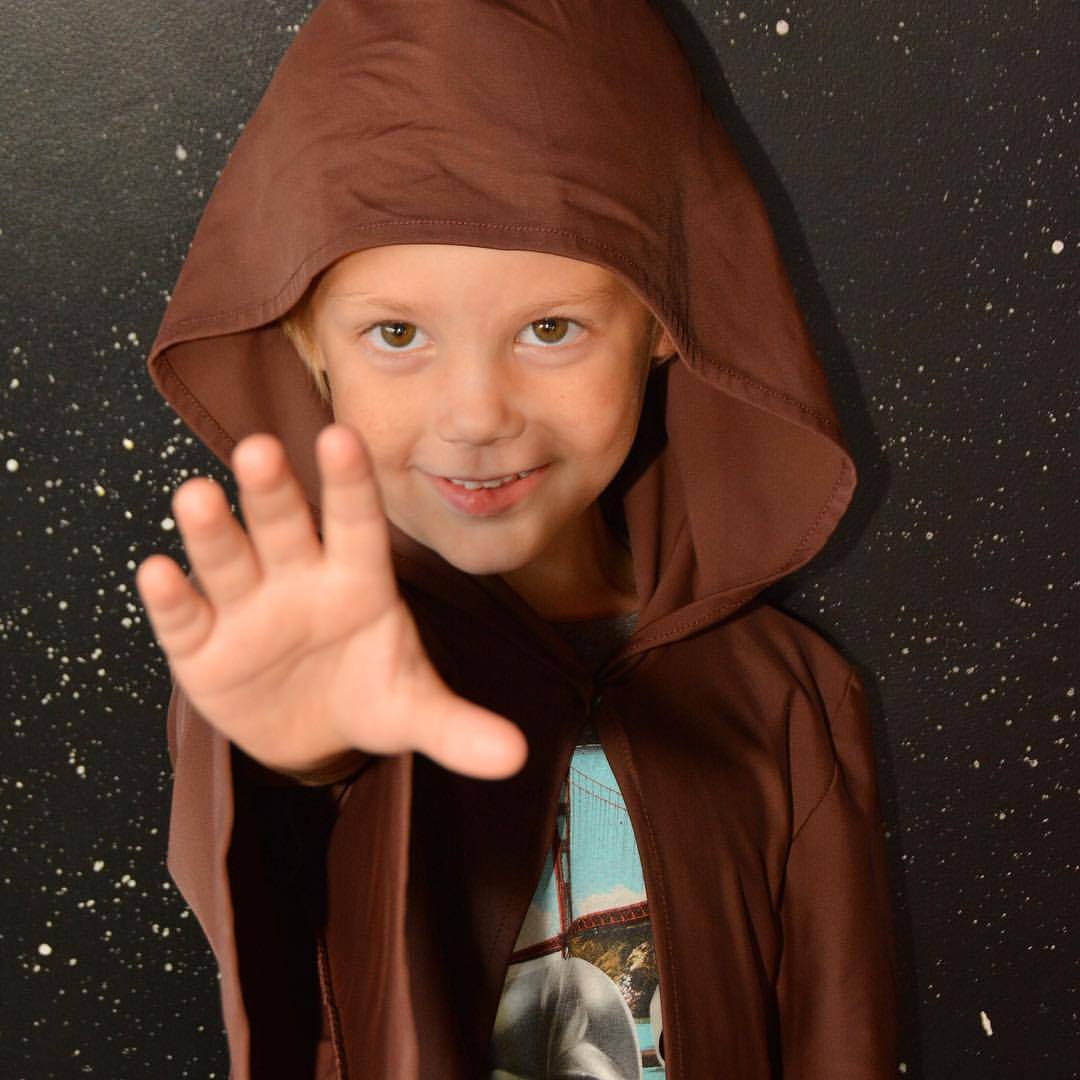 Pack Your Own Food

Did you know you can bring food and drinks into Disney? If you’re going to be carrying a backpack anyway, definitely pack your meals! We brought in sandwiches for lunch, but I ended up wishing we’d brought something for dinner, too! The food you can buy there is okay, but it’s expensive (shocking!). I bought a salad for dinner, and it was like $12, and not anything to write home about. Honestly, my kids were so excited to get to the next ride, they didn’t want to spend a lot of time eating meals anyway. I would suggest food you can eat while walking–sandwiches, granola bars, string cheese, etc. Then if you want to splurge on some fun treats, you won’t feel guilty for spending the money.

Don’t Go on a Saturday

So we actually did go on Saturday, but I kind of wish we hadn’t! Everyone I talked to said it was crazy busy that day, and blamed it on the fact that it was a Saturday. Without FastPasses, all the popular rides had super long wait times (some an hour+), and it was just hard to walk with the huge crowds of people everywhere. Going on a Saturday didn’t ruin our trip, but if you have any choice in the matter, I’d say aim for a weekday.

So I’ve mentioned how awesome the Disneyland app is, but it drains your phone battery pretty fast. And when you’re at the park for 12 hours like we were, that means a dead phone long before you leave. I really wished I would have brought an external battery pack or charger case! Learn from my mistake, and make sure you plan ahead.

Research the Rides and Make a List Before You Go

I usually prefer to just wander around and go on rides that look cool as I see them, but that tactic just doesn’t really work at Disney. You could easily spend a week there, so if you have just one day, you really need to plan and prioritize. Also, a lot of the rides have pretty lax height restrictions compared to other theme parks I’ve visited, so I (wrongly) assumed if my 3 year old was tall enough to go on something, it couldn’t be too scary. For example, I didn’t even know what Space Mountain was, other than that it was supposed to be awesome, which resulted in one kid hiding in my lap, the other begging “Mommy hold me!!”, and this hilarious picture: 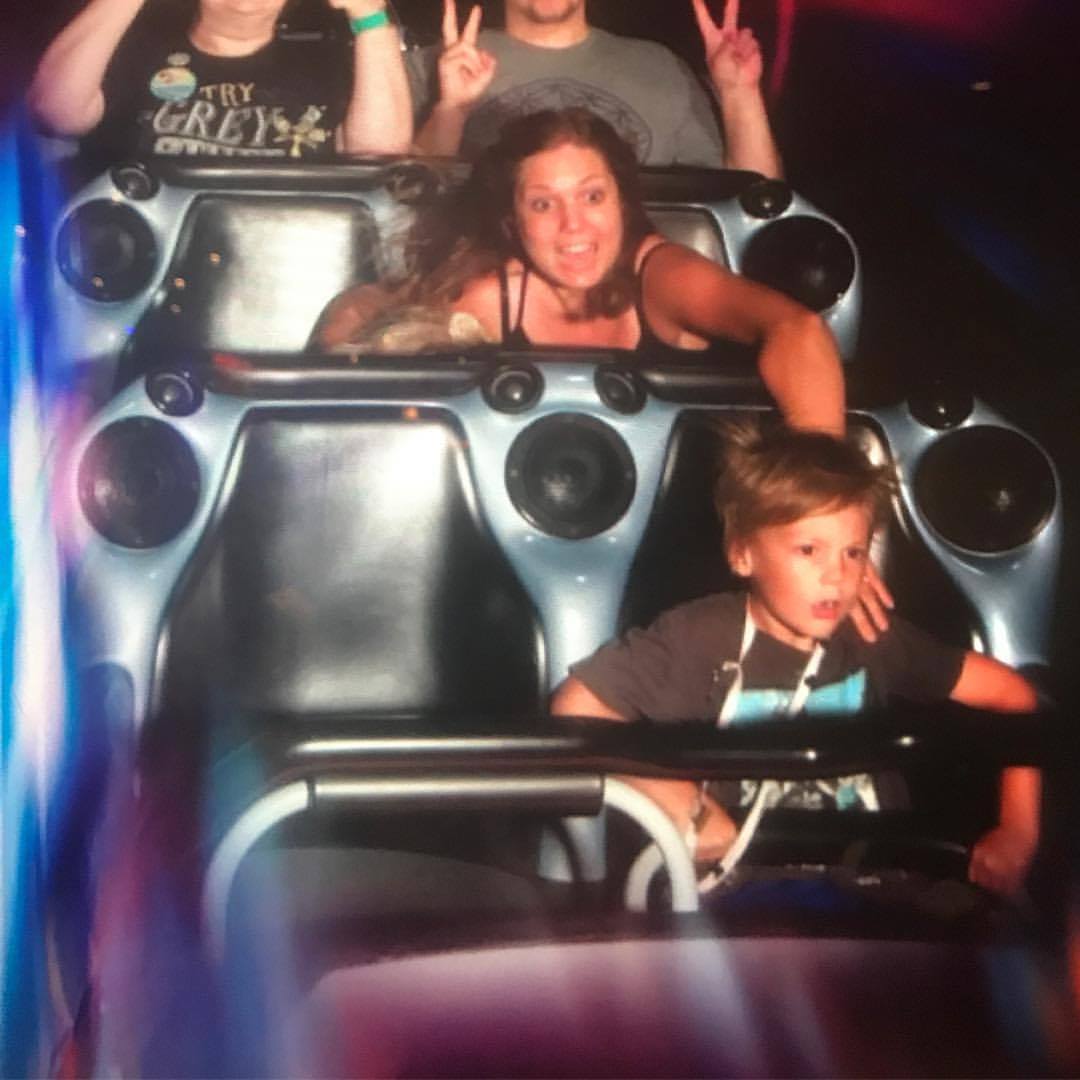 Overall, Disneyland left me wanting more, more, more. The lines were long, but the rides themselves were also longer than any other rides I’ve ever gone on. I also loved that most of them allowed you to bring you baby along on your lap; this meant that we could go on a lot of the rides together as a family. It proved itself to be the place with the longest lines on earth, but really, the happiest place on earth. 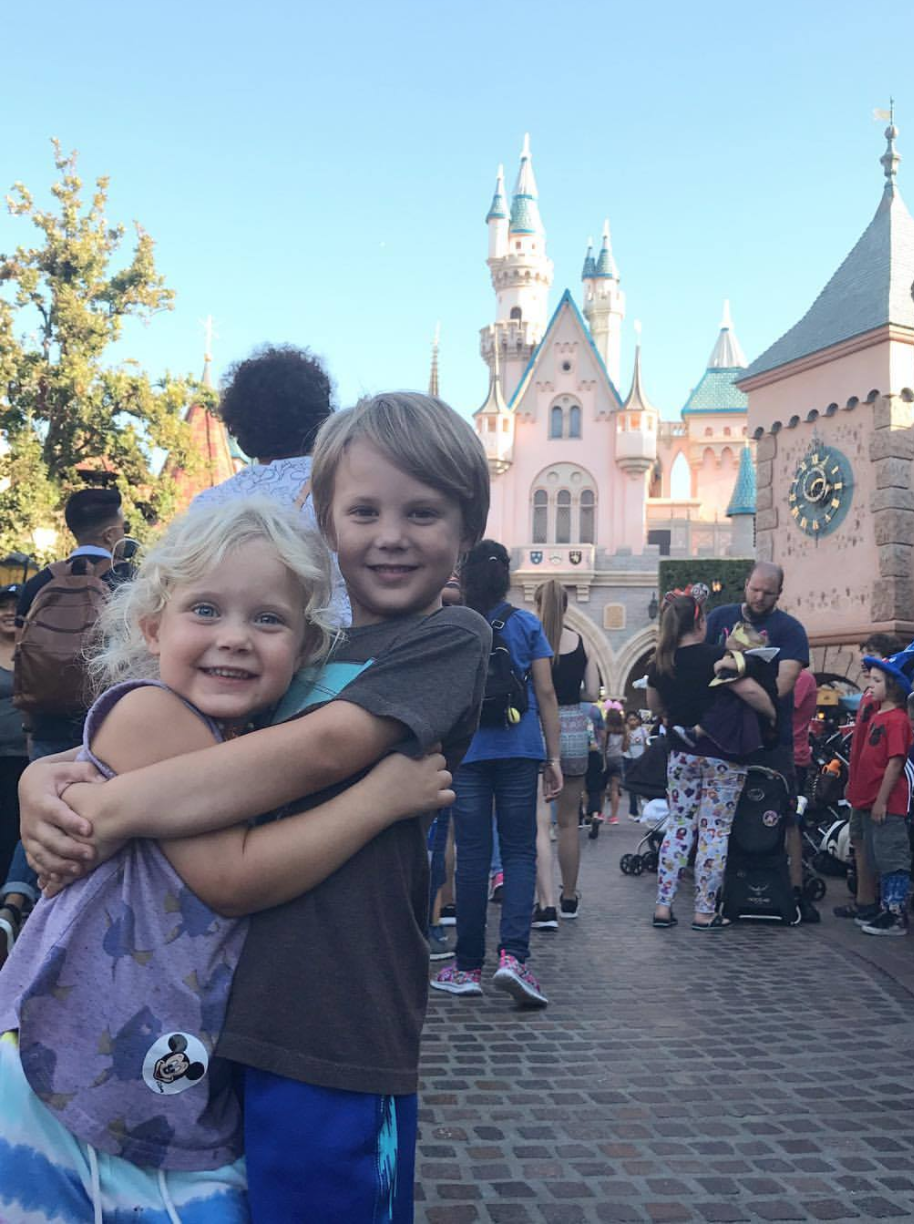