The same challenges posed to other subscription services apply just as much to Sony’s PS+ offerings for the month of October, perhaps even more so. While enthusiasm toward this month’s slate must combat against the lengthy sandbox experiences of a new Assassin’s Creed game and the hotly-anticipated sequel to Red Dead Redemption, PS4 owners are also caught in the web spun by Insomniac’s exclusive and surprisingly well-regarded Spider-Man.  There’s little use in challenging the enthusiastic momentum behind those games, yet there’s another area that Sony emphasizes in their monthly offerings that still earn attention: they’ve remembered that it’s Halloween, and they’ve offered a few tried and true horror goodies to play in between sandbox gaming marathons. It’s still a pretty shrug-worthy month, yet the way they’ve made on-theme games available during the gaps has given them an edge this time. Let’s take a stab at exploring these titles. 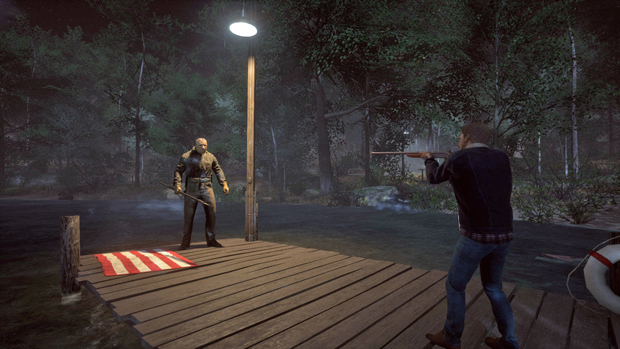 Friday the 13th: The Game

Did you know that Japanese developer ATLUS, responsible for the Shin Megami Tensei role-playing triumphs and the Trauma Center surgery simulators, once made a Friday the 13th game for the NES? The execution of that one illustrates one of the key problems with making an interactive experience out of a slasher or monster horror property, where the overwhelming power of the villain and the number of seemingly powerless “victims” trying to get away doesn’t fit terribly well with the traditional gaming model.  Friday the 13th: The Game takes that to heart, instead delivering a multiplayer experience with two options: either playing as one of several victims – camp counselors — who coordinate to escape from Jason, or getting randomly selected to play as Jason himself and attempt to kill the others.  Technical issues with glitches and server communication didn’t keep players from having a gory good time with the experience at release, and has been supported by a year of patches for said problems.

The visuals for Laser League easily draw one’s attention, looking like a combination of Tron and The Running Man in its top-down glimpse at a bizarre neon-infused sports arena. As a game, the functionality rests somewhere between Pong, Geometry Wars, and, yeah, the disc battles from Tron, pitting combatants against each other as lasers aim to take opponents out … and close-quartered swords can be used if those don’t do the trick. It’s a simple enough game in execution, but that seems to deepen once the player learns the ropes and formulates strategies on how to eliminate opponents with precision and timing. Some mild concerns over repetition in the concept didn’t seem to faze critics and players, who embraced the straightforwardness as a vehicle for accessibility and competitive mastery. 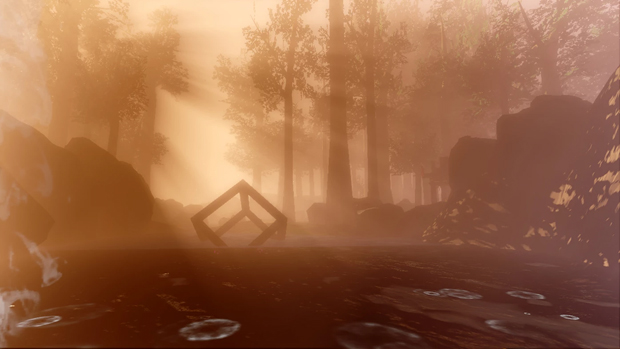 One frequent observation about the videogame Remember Me hinged on the fact that the game felt like Mirror’s Edge, only from a third-person perspective and with the science-fiction concept of directly preserved memories as its driving force.  “Kinda Like Mirror’s Edge, But About Memories” actually more aptly describes Master Reboot, a surreal first-person exploration game from Wales Interactive.  Players take control of Madison as she explore memories, solve puzzles, and traverse a haunting psychological landscape rendered in roughly pixelated yet entrancingly moody visuals, all in pursuit of solving the mystery of the Soul Clouds: clusters of data from deceased people’s consciousnesses that can be interacted with after their passing. Shades of other games’ ethereal attitudes and a healthy dose of the film Vanilla Sky hallmark this novel indie.

The works of M.C. Escher wouldn’t be classified as anything resembling the horror genre, but there’s something undeniably warped and psychologically provocative about the infinite, angular landscapes and twisted portraits he created.  The Bridge draws heavily from Escher’s style of overlapping realities in its black-and-white rendering of manipulated stages, which are flipped and rotated so the protagonist can collect keys and reach the end. A black-and-white sketched aesthetic, eerie oscillating sound effects and a delicately hypnotic score enhance the creepiness, though the drawn-out progression and dreary twists on perception proved a little too sludgy for some players. 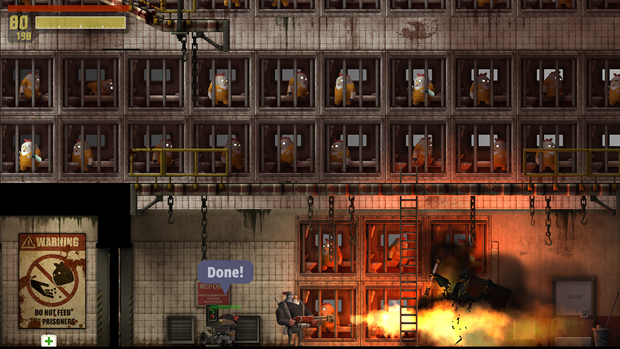 There’s something amusing about the mindset one has to get in to take Rocketbirds even remotely seriously, in which a satirical military-style action experience swaps out humans for … well, chickens and penguins. In the first game, Hardboiled Chicken gets assigned to take out an evil penguin dictator; in this sequel, Evolution, he’s got to finish the job against seemingly more complex odds. There’s something both amusing and cinematically fluid about how the character models respond to the side-scrolling controls, both the platform movement and the gunfire, though critics are quick to point out that a lack of precision in the controls detracts from the experience.

To cap off the month with a dose of suspenseful variety, Sony has also included a retro visual-novel experience with 2064 Read Only Memories.  Responses to this title have been polarizing: some embrace the pixel-art style, voice acting, and undertones centered on artificial intelligence and journalism, while others have grown frustrated with its character development and technical hiccups.