After numerous months that merited more or less a shrug, Sony isn’t messing around with their October slate of free PS+ games. I’ve talked a lot about balance when it comes to what they’ve been offering lately, needing a mix of both independent curiosities and larger titles to really win their subscribers over.  Well, they’ve really come out swinging this time … though, admittedly, this mostly applies to players who have made the jump into current-generation consoles.  Those who haven’t will be limited to a snazzy pool game, a colorfully absorbing platformer, a fierce airborne shoot-‘em-up, and some monster truck action. Those who have, however, will be treated to the latest installment in one of PlayStation’s most renowned AAA series and one of the very best horror games to come out in the last decade or so. Let’s take a gander at the goods. 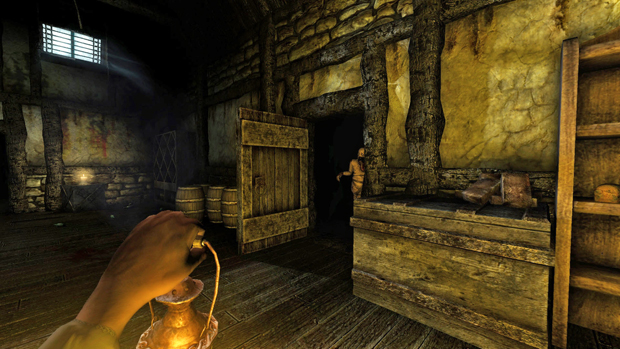 Over the past two console generations, the pickings have been slim for genuinely terrifying horror games. Sure, certain titles generated eerie surroundings and produced gruesome displays of creature gore, but few capture the fright that looms around corners or that fourth-wall-breaking absorption in the dangers of an environment.  Survival horror fiends out there with access to a capable PC were eventually able to fill that void, however, with the spectacularly unsettling Amnesia: The Dark Descent, in which a character devoid of access to weapons navigates grimy, dimly-lit dungeons, chambers, and corridors populated with fast-moving monsters and lost of antiquated secrets. Amnesia left such a mark that console players pleaded for it to be released on consoles, and eventually the PS4 received this collection, which also contains Dark Descent’s standalone expansion, Justine, and the less critically-acclaimed but still riveting sequel, A Machine for Pigs.

Both critics and longstanding fans were left somewhat quiet after experiencing Metal Gear Solid V: Ground Zeroes, chalked up by many as being a well-made, yet shallow and short-lived taste of what’s really to come from Kojima Productions.  Turns out, that impression was right, with the full deal sneaking up later as The Phantom Pain. Stealth gameplay blends with open-world freedom in this continuation of the story from Ground Zeroes, though it takes place nearly a decade later at points in the Middle East and Africa entrenched in warfare, with Big Boss hunting down the member of the Patriots responsible for the destruction of his mercenary group, MSF.  Some impressions of The Phantom Pain have been weighed down by a recurring criticism to open-world games, being that the story isn’t as concentrated and direct as it could/should be. That said, the universal response has been overwhelmingly positive to the production value of the scale, the sharp execution of both lethal and non-lethal stealth, and Kojima’s fusion of gameplay and cinematic storytelling. 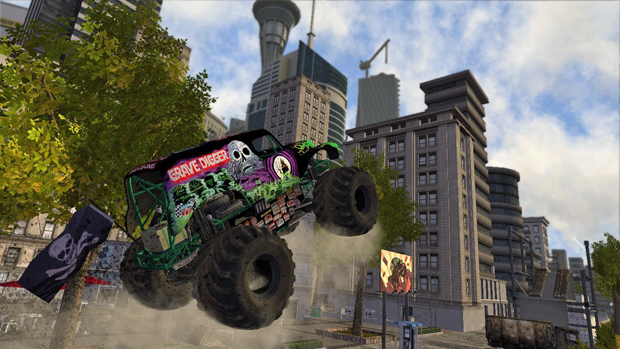 For those who might’ve not been in the know – raises hand! – Monster Jam is the brand name of the touring motorsport event featuring those recognizable monster trucks featured in raucous television commercials. From the slightly spooky Grave Digger and the bull-themed El Toro Loco to the many iterations of Monster Mutts, these competing trucks take on personalities as big and bold as professional wrestlers, competing in races and freestyle trick displays to garner prestige. Monster Jam Battlegrounds, an officially-licensed videogame developed by Feld Entertainment & GameMill Entertainment, aims to feature two different experiences tied to the trucks.  One side captures the spectacle of those event competitions within arenas, while the other features the trucks in odd side-scrolling obstacle courses reminiscent of motorbike games like Trials. Odd physics and repetitiveness seem to be consistent complaints from both reviews and players, though.

There aren’t many unique directions that console pool games can take, so the ways in which they can stand out come in tight controls and camera responsiveness, realistic visuals and physics, and enough play modes to hold one’s attention for longer than the span of a few rounds. Both consoles have access to Pure Pool, which suffers in a few areas, but they’ve also got their own superior that have much more to offer.  On the PSN side of things, Hustle Kings knocks it in the pocket under most circumstances, offering robust game modes, genuine physics, and appealing realism behind its design that incorporates reactive angles to showcase the action. 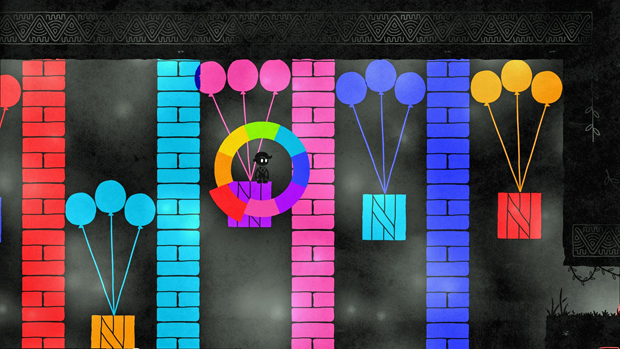 It’s interesting to see a novel gameplay concept essentially transform into a subgenre of its own, heavily borrowing from precursors while expanding on the mechanics to create a different experience. This has happened with platform games involving blacked-out silhouette graphics and universe toggle gameplay components, where the player switches between different interactive versions of the levels. Blending elements of Braid and Outland, Fiddlesticks Games’ Hue morphs the concept around changing the background color of the environment behind the main character, a young boy in search of his mother within the fluctuating shades of a hazardous environment.  The charm of the art style mixes with the ability to shift between many shades across the rainbow for creative gameplay, painting Hue into a subtly innovative and engrossing puzzle side-scroller.

Those who’ve played through the annals of shoot-‘em-ups, from R-Type to Ikaruga, understand how difficult those games can get … and understand how the difficulty level, and conquering said difficult level, might become an intrinsic part of the enjoyment factor. Sky Force Anniversary takes a different route, easing back on the relentlessness but paying careful attention to the craftsmanship of the levels and the upgrade mechanics of the game. It’s the kind of old-school arcade experience that relishes the groove that players get in with evading and firing, instead of bombarding with near-unavoidable challenges that might drive away those who prefer not to break a sweat during their sessions.