Yeah, it’s gonna get said: the January PS+ freebies feature what many would consider to be two GOATs.  Something about this month’s offerings is really satisfying.  Is it the inclusion of three remastered games from this generation’s version of Indiana Jones? Or, is it the fact that the craziness of hurling a farm animal at all manner of objects in an open world can now be enjoyed by subscribers for free? Who knows.  January’s a tricky month in terms of freebies, in that attention gets drawn to the preciouses that gamers either received as gifts over the holidays or have been stockpiling for the winter season, so it’s not really one worth big, splashy titles.  Therefore, this coupling of titles feels like it just right, essentially future-proofing one of Sony’s most popular franchises and giving an insane diversion with the other.  Let’s charge in! 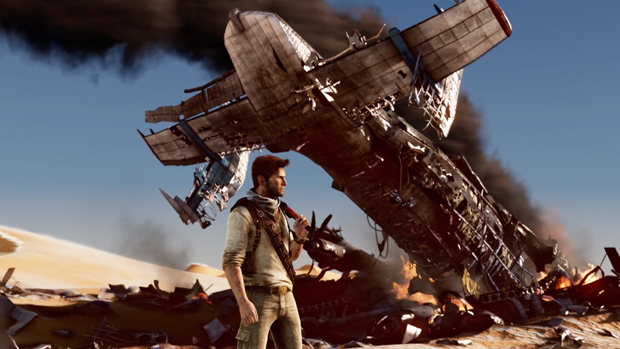 … or, is Nathan Drake the male equivalent of Lara Croft? That’s difficult to nail down, but what isn’t tough to determine is the source of the rampant, deserved popularity of Naughty Dog’s charismatic rogue of a hero. Look, the Uncharted games don’t really do much novel on a gaming level. All three of these installments feature standard third-person controls as the lead character navigates through exotic locations, doing some shooting, treasure-seeking and a little tomb raiding. As the series progresses, so too does the freedom of movement, going from versatile level design to more open-world navigation … though, again, nothing groundbreaking. Uncharted sets itself apart because of the cinematic methods of its storytelling and the realization of its characters, and how these aspects are executed through Naughty Dog’s perspective.  The Nathan Drake Collection features the first three games – Drake’s Fortune, Among Thieves, Drake’s Deception – in a celebrated remaster effort from Bluepoint Games.

The title for this game is both self-explanatory and absolutely in need of some explanation. Before the renaissance we’ve entered celebrating the Untitled Goose Game, the notion of a simulator following a goat sounded both entirely bizarre and, frankly, pretty boring. Then one sees it in action, and some things start to make sense. Don’t worry, Goat Simulator isn’t akin to Farm Simulator, in which you’re concerned with the everyday life of a goat; instead, the player gains control of a goat that one can maybe assume has some relation to Black Phillip from The Witch, in which he’s nigh-indestructible and ready, willing, and able to wreak havoc on an open world that might just be in the afterlife. This thing started as a joke, concocted during a break after development of a more serious game from Coffee Stain Studios, that snowballed into a full-blown title that features crazy physics, trick points, and bizarre mutations that add even more variety to the lunacy.