Announced within a press conference this morning, Amazon has launched a new set-top box device that’s taking on the Roku 3, Apple TV and Google Chromecast. Called the Fire TV, the set-top box is basically a Roku 3 on steroids with a quad-core processor and 2GB of RAM.

Amazon is also touting a voice search feature that allows users to locate movies and television shows by speaking the name of the content or actor into the microphone built into the controller. In addition, voice search can locate a specific genre of content. For instance, someone in the mood for action could simply say ‘action movies’ to bring up a collection of action movies and television shows. Or this can happen:

Interestingly, Amazon has added a new feature called ASAP (Advanced Streaming and Prediction) that uses a predictive model to pre-load content that Amazon thinks you will want to watch to reduce loading times. However, it’s likely that this feature is limited to Amazon Instant Video rather than carrying over to all the third party applications like Netflix or Hulu Plus.

Beyond streaming content, Amazon has also released the Fire Game controller for the set-top box. This can be used to play Android-based based such at Minecraft or driving game Asphalt 8. Interestingly, music being played in apps like Pandora or VEVO can continue while operating games or other apps.

One planned feature that won’t be available until next month is Amazon FreeTime for parents. This elevated level of parental control allows parents to create a kid-safe environment with user profiles. Similar to the Kindle tablets, parents can also set time limitations on when a child can watch television as well as how long. 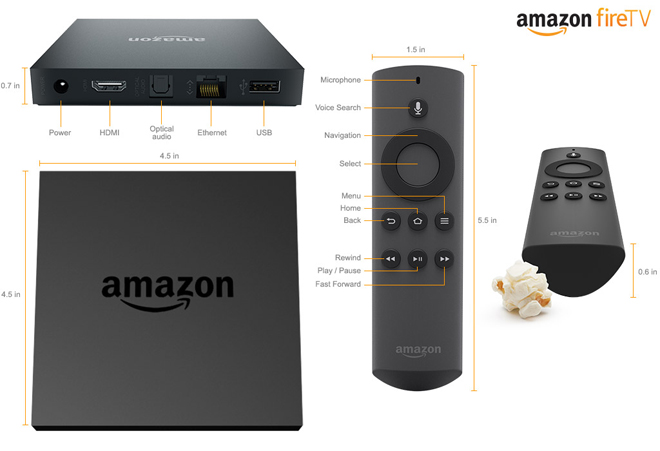 For anyone that owns a Kindle Fire HDX tablet, it can be used as a second screen during movies, television shows and games. On the video side, that provides extensive actor and actress information, supplied from Amazon-owned IMDB, within the X-Ray feature.

All this new tech isn’t going to be cheap though. Amazon is pricing the Fire TV set-top box in line with competitors at $99, no discount for Prime members. If you want to play games as well, the controller is an additional $40. Perhaps it’s priced on the high end to pay for the phenomenal Gary Busey plug seen above.

So what do you think? Will this product be snatched up by millions of Amazon shoppers or die a slow death in an already overcrowded product category? Tell us in the comments below.

Check Out the Fire TV on Amazon