Ben’s Bargains is launching responsive site design soon. Here’s what that means for you

First rolling out on the home page of Ben’s Bargains within the next week or two, we are pushing out a phased upgrade that will gradually transition the entire site to responsive design. If you are unfamiliar with responsive design, it’s a type of web design that keeps the look / feel / experience of the site identical across every screen resolution; desktop, tablet or smartphone.

Last year, we surveyed 1,000+ people about their experience on Ben’s, including the mobile version of the site, and conducted interviews. We took this feedback to heart, and took all that information into account when transitioning to responsive redesign.

Here’s a look at the current design versus the new responsive design of the main deal box when on a mobile device. This is on the home page when browsing on a smartphone: 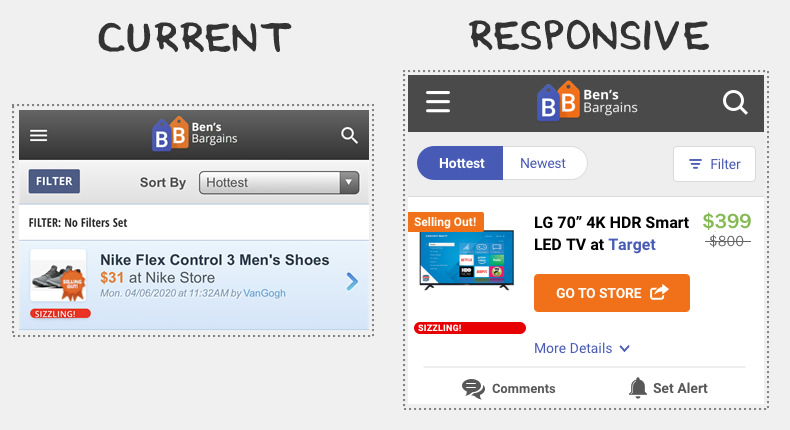 Responsive design helps us speed up loading times on the site. Some of our early testing has been showing significant loading time improvements, ideal for users that want to snag the best deals before selling out.

Our schedule for pushing out responsive design to the remainder of the Ben’s will be happening in phases over the coming weeks. That’s going to include transitioning all of our deal pages, store, brand and category pages to the new design as well as search results