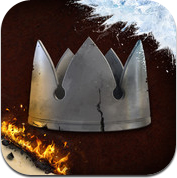 These days, just about everybody is watching HBO’s Game of Thrones, in addition to constantly debating which character died most undeservedly.

While the recently released iTunes app George R. R. Martin’s A World of Ice and Fire – A Game of Thrones Guide ($0) allows Game of Thrones fans to double-check character back stories, connections and associations with a book-to-book, spoiler-limiting slider, fans are still looking for a stellar level of interactivity that the books and the show cannot provide. But just how can that work with a catalog of characters that is both loved and inevitably mourned by fans?

Let’s face it.  As great as the house mottoes are, “Winter is Coming” and “A Lannister Always Pays His Debt” might as well be “Shut up beloved character and and get busy dying.” Even characters that fans love to hate just seem to be riding the pine until they seem so endeared to the viewer/reader that killing them will be the most devastatingly unexpected.

Fortunately, College Humor is ready to step forward and take the black with Game of Thrones Wish-Fulfillment. Not only can your favorite dearly departed character be saved alongside a heft of comeuppance, but those wishing for a definitive version of the theme song need look no further. Check it out: