With San Diego Comic-Con just around the corner (seems like it comes around faster every year!), comic books and graphic novels are now on everyone’s mind. To help gear up for the big event, I thought it might be fun to take a look back at some of the four-colored medium’s greatest achievements, chronicling ten of the most essential graphic novels and trade paperbacks (in no particular order).

These ten graphic novels are not only ideal gift ideas for any veteran comic book lover, but also equally enticing gateway gifts for those just starting their love affair with comics. As some of the best stories the art form has to offer, they prove that in addition to “BAMS!” and “POWS!”, the so called funny pages can also pack a super-powered literary punch. 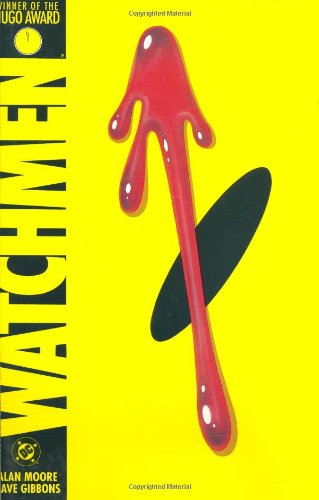 More than just the source material for that flashy Zach Snyder movie with that tall blue naked guy, Alan Moore’s Watchmen is an endlessly praised, brilliant deconstructionist work that still stands tall (and blue and naked) as one of the medium’s true masterpieces. Even beyond its groundbreaking reinvention of superhero storytelling, like Citizen Kane is to cinema, the book is essentially an encyclopedia of everything comics are capable of. And beneath all that artistic depth, is just a genuinely engaging superhero mystery full of fascinating characters — including some who actually do wear clothes. 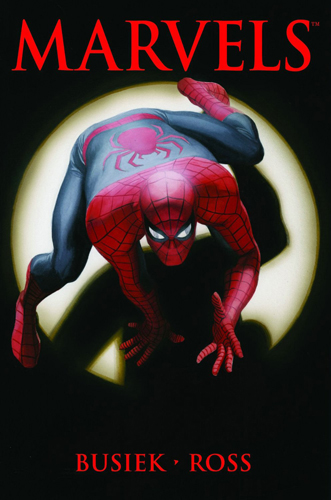 A nostalgic trip through Marvel Comic’s golden and silver ages as seen through the eyes of a Regular Joe, Kurt Busiek’s Marvels is a stirring love letter to superhero wonder. Tracing several classic milestones throughout the company’s history, including the arrival of Galactus and the death of Gwen Stacy, the limited series offers a new perspective on the larger-than-life events — revealing the simultaneous fear, uncertainty, and awe of the everyman, as he is gradually surrounded by giants… in spandex. Featuring beautiful painted artwork by Alex Ross, the book is a perfect introduction to Marvel’s rich universe of characters.

From writer Garth Ennis and artist Steve Dillon, this 66 issue series (collected in 9 trade paperbacks) is an irreverent explosion of pure comic book awesomeness. Subversive, controversial, blasphemous, disturbing, sexy, hilarious, and a whole lot of fun, the book is one of the medium’s most provocative works. Through the story of a Texas preacher possessed by a supernatural entity, Ennis creates a contemporary western like no other. While some might not take kindly to the series’ treatment of religious ideas, beneath all the defiant content is a genuinely affecting story about loyalty and friendship. Well, loyalty and friendship and drug addicted vampires, killer saints, absentee deities, and an imaginary apparition of John Wayne. Like I said, pure comic book awesomeness. 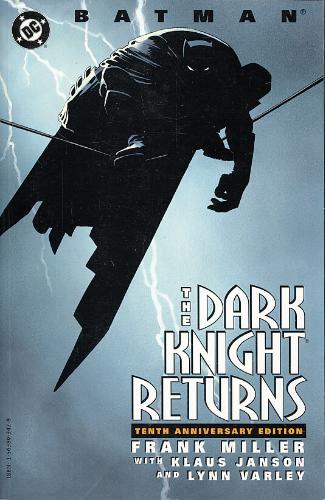 Frank Miller’s dark and violent reinvention of the Batman mythos is a truly defining piece of superhero fiction, tackling similar deconstructionist themes and subject matter as Watchmen, but this time with one of the industry’s most iconic characters. Highly influential, Miller’s decidedly grown up take on the Dark Knight has gone on to inform every subsequent version of the Caped Crusader. Also, the book finally answers that age old geek question: who would win in a fight, Batman or Superman?

Though this list is more geared toward superheroes and genre work, that’s far from all the medium has to offer. Blankets represents sensitive, honest, deeply personal storytelling at its best. Writer Craig Thompson’s autobiographical illustrated novel recounts the author’s coming of age into adulthood, chronicling family conflicts, religious crisis, first love, and dwindling faith. Delicate, raw, and graceful, the book proves to be universally relatable and emotionally resonant, revealing all the bittersweet pangs of youth. In other words, this is likely to make grown men cry. 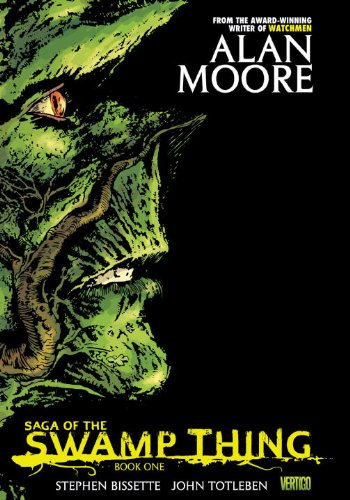 Alan Moore’s legendary run on Swamp Thing (now collected in 6 trade paperbacks) brought new life into the fading monster and helped pave the way for DC’s Vertigo line of adult targeted comics. By reinventing a key component of the character’s origin, Moore added new layers of intrigue to the story, creating a gothic horror setting that would grow increasingly ambitious in scope as the series continued. Spine tingling and full of aching pathos for its tormented protagonist, the book features many techniques that Moore would later refine in works like Watchmen. But above all, Swamp Thing deserves a spot on this list for the sheer fact that it somehow turns a walking, talking mass of vegetables into a compelling and intimidating hero. The Jolly Green Giant, this is not. 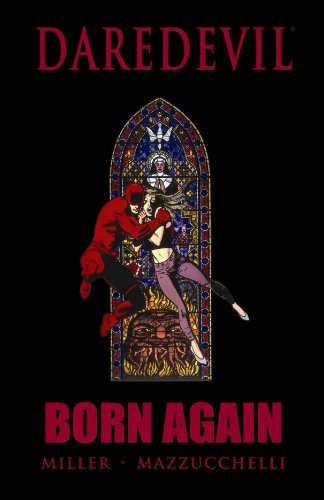 Much like he did with Batman, Frank Miller also had a large hand in defining Marvel’s famous blind superhero. After a much celebrated stint on the book throughout the early 80s, Miller returned to the character in full force with this storyline, crafting one of the series’ most acclaimed arcs. When the villainous Kingpin discovers Daredevil’s true identity, he systematically attempts to destroy the hero’s life. Taken to new lows, Matt Murdoch is stripped of everything, leaving only a “man without fear.” Though most famous for Sin City and his Dark Knight Tales, this actually remains my favorite work from Miller as a writer — besides his cinematic classics RoboCop 3 and The Spirit, of course. 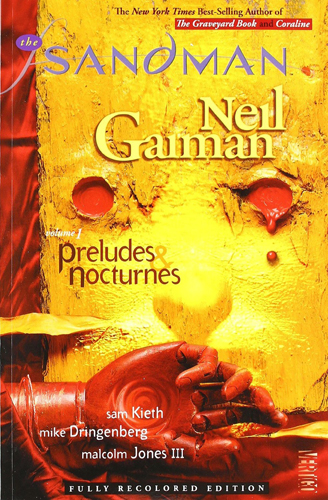 When people scoff at the notion that comic books can be viable pieces of literature, one of the first works I always point to is Neil Gaiman’s Sandman. First published in 75 issues (now collected in 10 trade paperbacks), the sprawling dark fantasy tale about the trials and tribulations of the lord of dreams features an endlessly rich tapestry of ideas — blending fables, history, and religion into a cohesive, all-encompassing mythology. Filled with lyrical beauty, Gaiman weaves an epic and intimate story about stories, celebrating the art of narrative through wonder, horror, and the most infectiously irresistible personification of death in all of fiction.

9. The Compleat Moonshadow (around $37, Amazon) 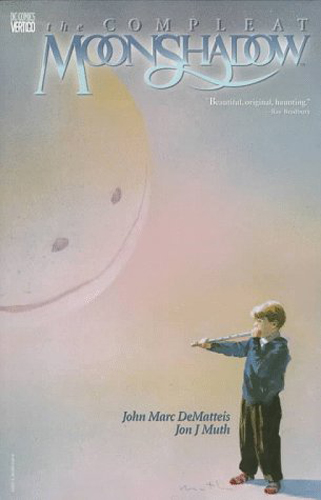 Though relatively obscure compared to many of the other titles on this list, J. M. DeMatteis’ bittersweet science fiction coming of age story is an incredible artistic achievement that deserves much more attention than it gets. Featuring beautiful illustrations by Jon J. Muth, Kent Williams, and George Pratt, the series offers a hauntingly affecting examination of adolescence and growth set amidst an appropriately bizarre sci-fi/fantasy backdrop. Tearfully melancholic, potently funny, and utterly heartbreaking, it just might be my favorite comic of all time. While the book sadly appears to be out of print, this is one title that’s definitely worth hunting down. 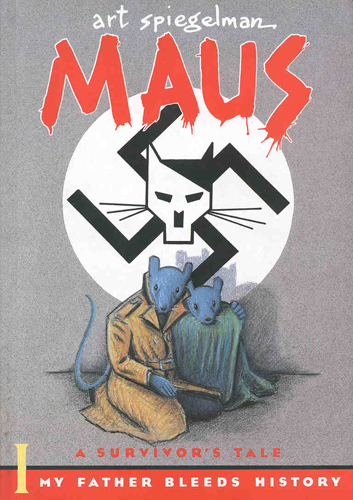 Art Spiegelman’s Pulitzer Prize winning Maus has become the quintessential example of graphic storytelling as art, and for very good reason. A powerful recount of the author’s father’s experiences in the Holocaust, the comic examines unspeakable horrors with powerful insight and deceptively simple allegory, representing Jews as mice and Nazis as cats. A story about hardship and trauma, and fathers and sons, the book continues to be an enlightening and utterly devastating illustrated memoir, revealing the limitless versatility of the comic book medium to tell stories of all kinds, creating a world where Maus can sit comfortably on a shelf right next to a collected edition of Howard the Duck.

In addition to writing for The CheckOut, I'm a Blu-ray reviewer for High-Def Digest, a short filmmaker, and a proud purveyor of rambling words. My experimental short film, Broken Records, premiered at the Slamdance Film Festival and is now viewable online.