Home   >   Features   >   The Shopping Apps You Need to Survive Another Holiday

The Shopping Apps You Need to Survive Another Holiday

The holidays may be swiftly passing us all by, but the gift of giving will never go away. Now that you’ve gone through the shopping mall ringer once again, surely having compiled new strategies in the wake of old ones thrown out, maybe you feel confident. Next year it will all go swimmingly. That birthday around the corner, or whatever holiday might cross your calendar next, is surely just a breeze to be breathed in as concurrently as the air in your everyday life.

But this is a mistake, dear consumer. This is a folly, and you will rue the coming holiday, the maker of your emotional and psychological defeat. There is only one way to overcome that creeping shadow of potential gift-giving failure, only one way to ensure your family members still love you in the passing of a traditional swapathon. It’s not your wiles or your experience. It’s much simpler than that. Just use these handy-dandy shopping apps!

Sometimes you end your shopping adventure empty-handed. You just never crossed paths with that perfect gift, and now you’re fearful of a wasted day. Fear not. This is the app that strives to actually reward the act of shopping, granting points upon simply entering one of its many partnered retailers’ stores, eventually leading to earned gift cards and other goodies.

And the partners are nothing to scoff at. Target, Best Buy, Old Navy and more are all in on the game. The app even makes an effort to locate deals in your vicinity. It’s a must-have for the aimless browsers of the world, especially for those who like free things. 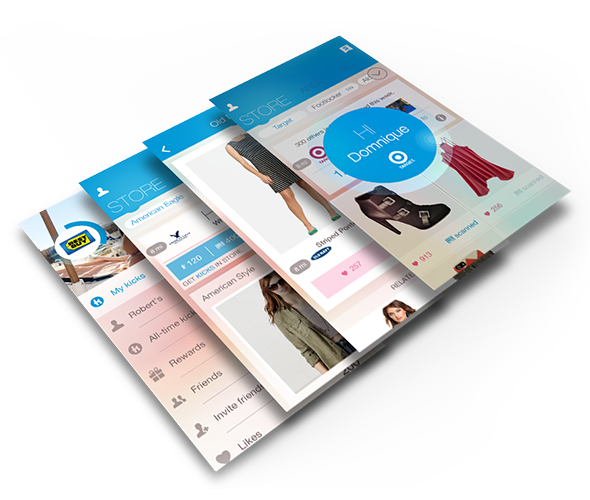 If you do find yourself in the regrettable position of using your legs and leaving the house, try not to do it without the Barcode Scanner+ (Plus) application. It scans barcodes. Unlike other barcode scanning applications, however, it doesn’t do anything else.

The twist is that’s a good thing, since the developers behind this app seem to have an obsession with scanning every kind of barcode on the planet, whereas other apps will often run into products it can’t quite understand. It’s the singular focus of this one that makes it worth the price tag.

There’s a real pragmatic edge to this particular app, opting for budgeting lists and cold, hard mathematics over flashy graphics and cute fonts. If you’re serious about your gift giving and getting, as any whole person should be, then knowing just how much you can or should spend from gift to gift is only slightly less important than the gift itself. This is for the “it’s about the journey” guy in the odyssey of department stores and Build-A-Bears.

Surprise! Amazon is, for some unknown reason, all about the shopping applications. Amazon wants you to shop. Amazon wants you to never forget to buy gifts. That’s what Surprise! is all about. It’s a calendar of gift-giving events, an eCard generator and, most importantly of all, a painless way to give somebody an Amazon gift card. It may be cheap and easy. It’s also quite quick and painless, a last-second reminder for those last-second kind of people. 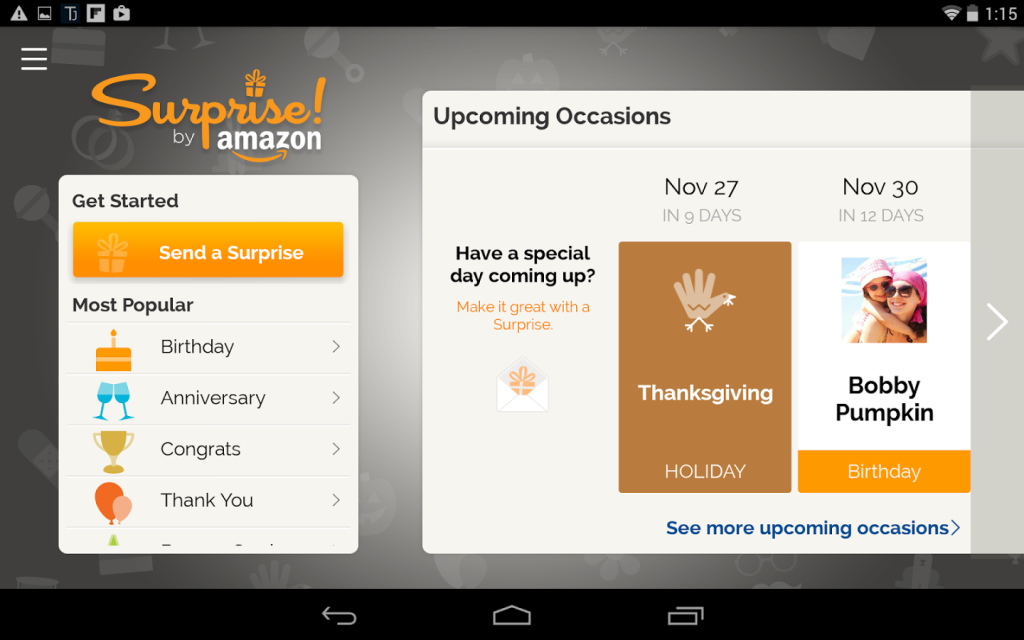 The calendar in Amazon’s iOS and Android Surprise! App.

What’s It Worth on Ebay?

If you ever ask yourself this question, chances are you’ve sauntered online and found out the old-fashioned way: through Ebay. That’s fine and everything. This app just makes that process a little easier, a little more streamlined. What’s It Worth on Ebay? compiles and averages for you a good price for whatever you’re looking for based on successfully sold items in the past few weeks.

It may be a selling app before anything else, but there’s utility in the realm of gift-giving, especially for those flea-market, antiquing types, always on the lookout for that one, unique gift nobody else could ever find. Except for Ebay. Ebay already found it.

Parking lots are vast and scary places. Danger is afoot. Rows of metallic beasts create a hedge maze of confusion and horror. All you needed was the Car Finder app, but now you’re hopelessly lost and caved in by Best Buy, Wal-Mart and Target.

You may finally even bemoan your decision to paint your car a quaint silver, instead you should have used this GPS-enabled car locator, because all those gifts weighing down your aching heels aren’t getting any lighter and you have the sick feeling your car isn’t getting any closer. That’s the feeling of many regrets, my friend. Time to hit the dreaded alarm button on your key and endure the public shame.