While the first official day of summer might not come until June, the month of May traditionally announces the arrival of the hot days, vacations, and resulting free time that hallmark the time of year.  Some immediately venture into the baking sun or dip into the water as soon as they get their time off; others stick to the indoors just to enjoy some much-needed downtime, oftentimes with a console controller in-hand or positioned at a PC.  Between gamers catching up on their backlog of games or having their attention pulled in other directions, it’s a roll of the dice whether it’s a good idea to release a new, big title at the very beginning of the summer, and that’s about where we’re at with the new releases for May.  Despite a little rage and some remake action, it’s a tame — albeit, pretty dark! — month. 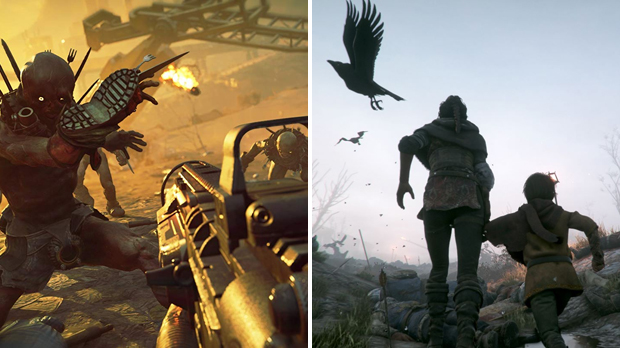 The Saints Row franchise excelled not because it tried to simply emulate contemporary installment in the Grand Theft Auto series, but because it poked fun and outright satirized the genre along the way.  Shakedown: Hawaii attempts to do something quite similar, yet its sights are set on the vintage top-down framework of the OG GTA titles (those acronyms, right?). VBlank may’ve done this first with Retro City Rampage, but the vibrancy and complexity of Shakedown: Hawaii’s open-world map and the characters populating it — more SNES/Genesis in nature than original NES/SEGA — shift things up a few gears. Somewhat amusingly, it’s available on PS4 (and PC and Switch) and not on its big console competitor, almost like those exclusive days of old.  And it’s at a bargain too, for only $20 on the digital networks.

Known for such smaller, less-influential shooters such as Wolfenstein, Doom, and Quake — *nudge, wink* — iD software embarked into the harsh climate of a new franchise with Rage, a post-apocalyptic first-person shooter released under the watchful eye of Bethesda. While the reception to that new experience was somewhat mixed considering the studio’s pedigree, lowered by what seemed like older-school inclinations and competition in the form of Borderlands, there was enough success and interest for Swedish developer Avalanche Studios to take up the mantle and deliver on a sequel, Rage 2. Perhaps their experience with the likes of Just Cause and Mad Max might result in more versatile traversing of the desolate landscape, while seeming content with carrying over many of the combat and customization pillars of the original.  Rage 2 will be hitting the wasteland on Ps4, Xbox One, and PC

Taking risks with innovation grows more difficult to do in the gaming industry, a realm where titles are either built, tested, and marketed with wide appeal in mind … or squeezed into the indie market if the concept’s a little lower on the scale of desirability. A Plague Tale: Innocence tries to dig into the space between those, utilizing a setting that doesn’t at all seem suited for a videogame: it depicts a pair of siblings struggling to survive the early stages of the Black Plague, as indicated by the title. Adopting a tone not unlike, say, The Last of Us, the game leads the main characters through the rat-infested destitution — and odd beauty — of lands ravaged by obstacles through which the pair must navigate, tapping into atmospheric tension, stealth maneuvering and environmental puzzle-solving in a beautifully-rendered 3D landscape.  A Plague Tale will brave the console landscape on the PS4 and Xbox One. 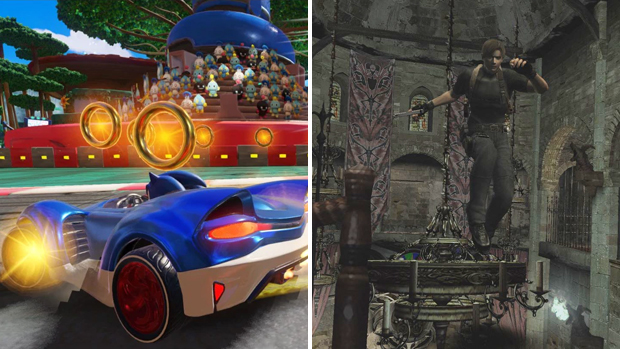 Despite whatever claims the developers make to the contrary, it’s clear that the Sonic line of mascot kart racing games have always been designed as a console-wide alternative to Mario Kart.  While that may be the case, it doesn’t mean that the games have necessarily been weaker or watered-down knockoffs, as several titles — namely Sonic & Sega All-Star Racing and Racing Transformed — hold their own as tight, somewhat more reality-bound experiences full of their own exhilaration. Sumo Digital once again hits the pedal to the metal with Team Sonic Racing, and while it appears as if it’s a visually polished updating on the concept, the developer has engineered this entry to be more cooperative and team-based than either the previous Sonic racers or its competition. This isn’t a sequel to Sumo Digital’s prior Sega All Stars racers either, as it’s only centered on the Sonic universe and characters.  Team Sonic Racing will zoom across the finish line on the Xbox One, PS4 and PC, at a bargain price of $40.

Fans of this series have waited a long, long time for Resident Evil 4 to finally get a remastered edition.  Wait, hold on … it’s already been ported and remastered?  Several times, across numerous consoles? Huh. Yep, one of the most frequently re-released games from two generations ago has once again made its way onto another gaming machine, this time, somewhat fittingly, onto the Nintendo Switch.  Sure, it’s hard to ignore that the absence of full third-person shooter movement and the on-the-rails level design does continue to feel more dated each time it hits a new console.  That said, it’s still also incredibly easy to sink your teeth into the tense survival-horror atmosphere, the cinematic attitude, the reflex-heavy combat strategies, and the inventory design – “What’re Ya Buyin’?” – of Leon’s blitz through a zombie-infested cult in order to save the President’s daughter.  Two more of the franchise’s entries released on the Gamecube, Resident Evil and RE:Zero, are also entering the fray on the Switch.

Among the Sleep: Enhanced Edition

Speaking of taking risks with odd concepts, Krillbite Studio have decided to take their audience into the mind of a slumbering child with Among the Sleep.  A first-person adventure hinged on puzzle-solving and psychological horror, the game allows those playing to take control of a dream-state child as they navigate the terrors of their mind, searching for the child’s mother with the assistance of Teddy, a sentient stuffed-animal companion and rechargeable light source. Among the Sleep has been rated T for Teen, so it would be reasonable not to expect anything too terrifying to come out of shadows and after the child, but the walking space between destinations has been crafted to be immersive and sprawling enough to create a sense of unease about where they are and where they’re headed. Reminiscent of Gone Home or maybe a little bit of Layers of Fear, it’s a mood piece of a walking simulator that’ll hopefully possess the qualities for its niche audience to remember after waking up from the experience. This “enhanced edition” arrives on PS4 and Xbox One, and on the Switch for the first time.

The Nintendo Switch will also be plunging into the remastered edition of Assassin’s Creed III on May 21, as well as into the insanity that goes down in Steelport with Saints Row: The Third on May 10. Episode 3 of Life is Strange 2 will pop up for download on May 9, and for those on the PC, Total War: Three Kingdoms will be entering battle on May 23.