Let’s be honest: Sony needed a big win for their PS+ subscription service, because they’ve been treading water – sometimes dunking underneath the surface – ever since they stripped away their free legacy titles and reduced their offerings to only two a month.  They made a big advancement last month by delivering a high-profile remaster of a fan favorite franchise, yet they’ve struggled to uplift their prestige with big-enough titles among their pairings to get subscribers legitimately excited again. Perhaps it was a happy accident, but a few last-minute maneuvers have given them just that, including one of the most visually and narratively exciting games to have come out in this generation. One can hope that this may be a suggestion of things to come, as they’ve also included a well-regarded, under-the-radar arcade racing game that also hits some needed nostalgia points. Here’s a closer look at the pairing: 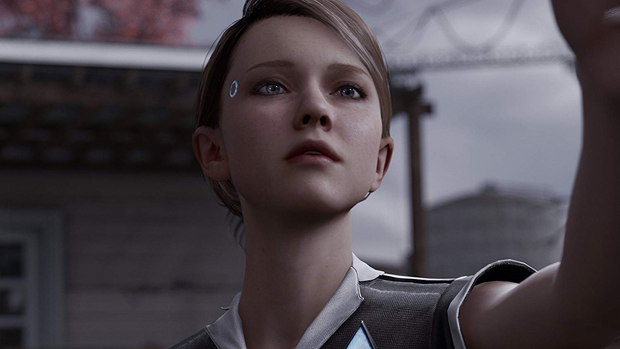 To say that the games produced by David Cage and his development crew Quantic Dream are polarizing would be an understatement. Some appreciate the “interactive drama” nature of the wild experiences that he creates, while others jab at both the gameplay and the bonkers narratives that come out of his mind, hitting a downward trajectory in positivity the more out-there, and prone to plot holes, that they become. Cage explores the nature of artificial intelligence and androids in his most recent narrative, Detroit: Become Human, in which he tells the somewhat intersecting stories of three different androids – a police inspector, a revolutionary, and a housekeeper – who handle their own kinds of awakenings.  Decisions made by the player shape how they process their awakenings, contained within investigative and choice-making environments that remind one of the less action-packed aspects of BioWare’s games. Whatever debates remain about David Cage’s creations being good “games” aren’t going anywhere, but the interwoven storytelling and reactivity here strengthen one side of that argument.

Back before the era of racing simulators where everything needed to sound and feel accurate – or at least a certain way – for the game to be appreciated, arcade racers only really needed to be fast, responsive, and attractive while hugging the curves of the road and getting to the checkered flag. A follow up to Aquiris Game Studio’s first globetrotting attempt at the concept, Horizon Chase Turbo aims to get to that pure state of accelerated bliss, only with vibrant contemporary visuals.  Surrounded by attractively blocky graphics and catchy upbeat music, the player fluidly zooms around the bends-‘n-curves of modified versions of global locales, keeping an eye on other racing competitors and fuel consumption along the way.  Critics may be a little hesitant to heap praise on Horizon Chase Turbo due to the uninspired nature of the tracks’ settings and what happens when cars bump into obstacles, but the combo of a nostalgic core and updated technical prowess make it worth jumping in the driver’s seat.