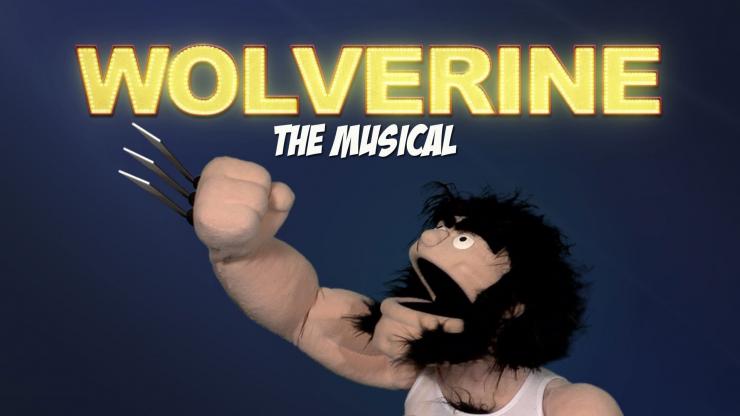 Though most famous for playing everybody’s favorite feral mutant, Wolverine, Hugh Jackman is also a Tony award winning Broadway performer. In other words, just as Andy Samberg and SNL have so amusingly revealed, he’s the best of both worlds — able to sing, dance, and mercilessly slash his enemies to pieces. While each side of Jackman has had its fair share of success, the two have never truly shared the spotlight together… until now. Watch as worlds collide in Wolverine: The Musical!

The YouTube short by “Glove and Boots” offers a lovingly hilarious parody of Broadway classics starring a puppet version of Wolverine. It’s like Les Miserables, but with felt… and claws! (And mercifully less Russell Crowe.) Yes, we’ve all seen the character kick ass on the big screen, but have you ever heard him longingly reminisce about his time in Alpha Flight through the gift of song? Did I mention that the video also features a cameo from The Hulk and a chorus of singing Multiple Men? How have you not clicked play already?!

I don’t know about you, but I’m now even more pumped for James Mangold’s The Wolverine — though, I’ll be mightily disappointed if Logan and the Silver Samurai don’t share a duet. I mean, their chemistry together in the trailer was palpable. I can’t be the only one who noticed that, can I?

In addition to writing for The CheckOut, I'm a Blu-ray reviewer for High-Def Digest, a short filmmaker, and a proud purveyor of rambling words. My experimental short film, Broken Records, premiered at the Slamdance Film Festival and is now viewable online.