Star Wars The Last Jedi Review: Still Some Magic in These Bones 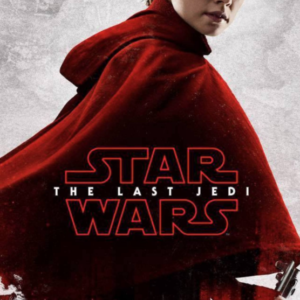 Spoiler alert: Only if you’ve never seen the trailers or TV spots. OK, a *tiny* spoiler in the second to last paragraph.

A day after the Disney Empire (First Order?) took over the movie universe—via the fantastically timed buyout of Fox, the old home of the first two Star Wars trilogies—the latest chapter of the saga hits the big screen, powered by the usual media barrage and glittering praise from an adoring press. (What happened to those crusty pretentious critics from the olden days? Yeah, they were struck down by the fanboys…who became more powerful than you can possibly imagine.)

Lucasfilm chief exec Kathleen Kennedy tapped 43-year-old writer-director Rian Johnson, the indie auteur behind cult movies Looper and Brick, to bring an up-to-date sensibility to the 40-year-old franchise. In some ways, he is the star of the movie. Like Irvin Kershner was to George Lucas, he’s a more stylish director than J.J. Abrams with a more cinematic touch and a way of framing faces that heightens the sense of drama. In almost Kurosawa fashion, Johnson uses color—especially red—to distinguish the action set pieces. (In the lead-up to release, he even cited Three Outlaw Samurai by another Japanese director Hideo Gosha as a major influence.)

But as the sole credited writer of The Last Jedi, Johnson stumbles around a bit searching for newness in the old bones of Star Wars. Some of it works well, some of it doesn’t and some of it simply adds to the gradually ballooning running time (2 hours and 33 minutes—the longest Star Wars movie). Like a lot of big movies from the past 15 years, it racks up many more endings less satisfying than the last, and then never really ends at all. Here’s looking at you, Marvel movies… 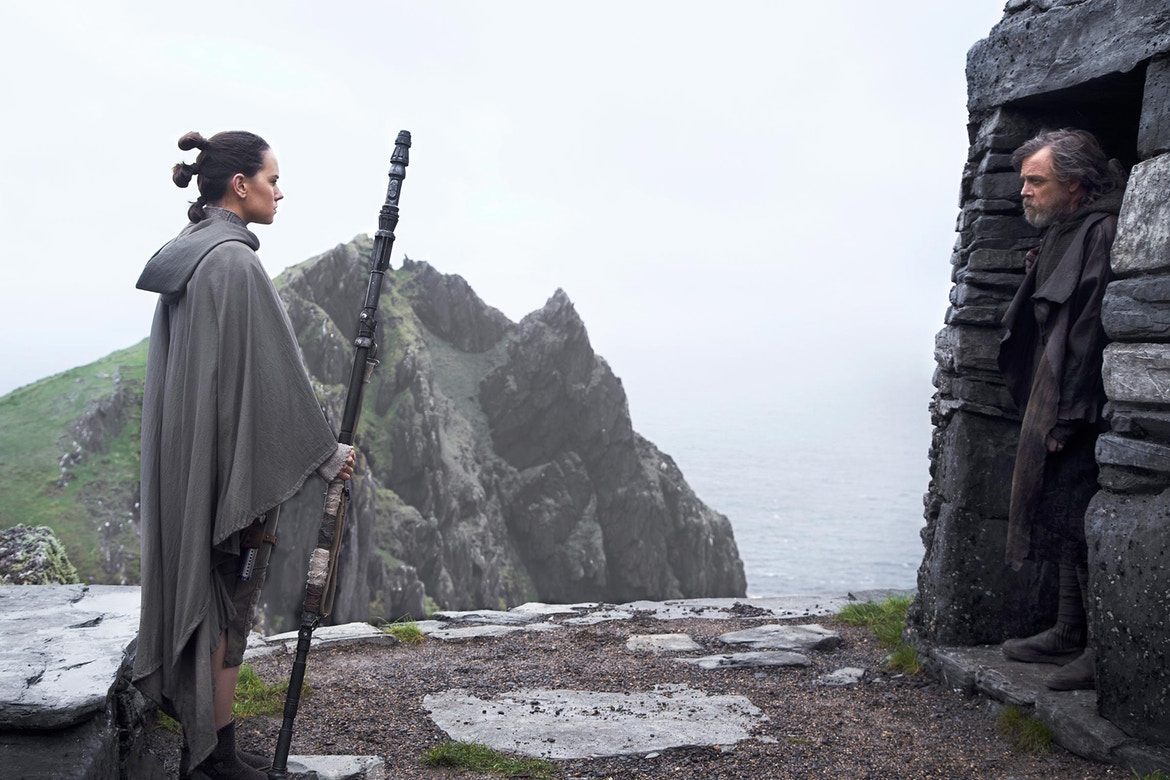 The hype before the movie, based on Johnson’s pedigree, was that The Last Jedi would be the “Empire” of the new sequel trilogy. To their credit, Johnson and the cast and crew don’t really play that game, which was wise. But is The Last Jedi better than The Force Awakens? Time will tell, but you could say yes and no…so let’s the count the ways, starting with the good parts.

The Last Jedi excels because Mark Hamill (aka Luke-freakin’-Skywalker) gets to actually say a word. He is still the soul of the Star Wars universe, and he lifts the movie whenever and wherever he appears. He does what you expect, but it’s still thrilling and director Johnson manages to throw in some light moments and dramatic curveballs. While it was great to see Harrison Ford return in The Force Awakens, his time away from the universe kicking bad guys off planes and getting angry was hard to ignore. Mark Hamill is still, well, Luke. (Hey, he’s a good actor.)

The lightsaber fighting in this movie—this is not a spoiler, people, come on—is staged in a refreshing and cool way. There *may* even be some use of old-school cinema techniques to enhance said lightsaber action. You’ll see. Johnson also manages to reduce the number of OT callbacks to a much subtler amount. So Rian Johnson gets it on the nerd level.

The Porgs, the birdlike creatures that became an instant hit from the trailer, do steal their scenes but are not as annoying as you might suspect, nor are they overused. There’s a brief but awesome scene with Chewbacca and the Porgs that’s more entertaining than anything involving the Ewoks. In addition to Porgs, we get some interesting voiceless animal creatures: the Vulptex, crystal foxes living on the planet Crait, and the Fathiers, big-eared space horses that are a cross between Tauntauns and Falkor from The NeverEnding Story. 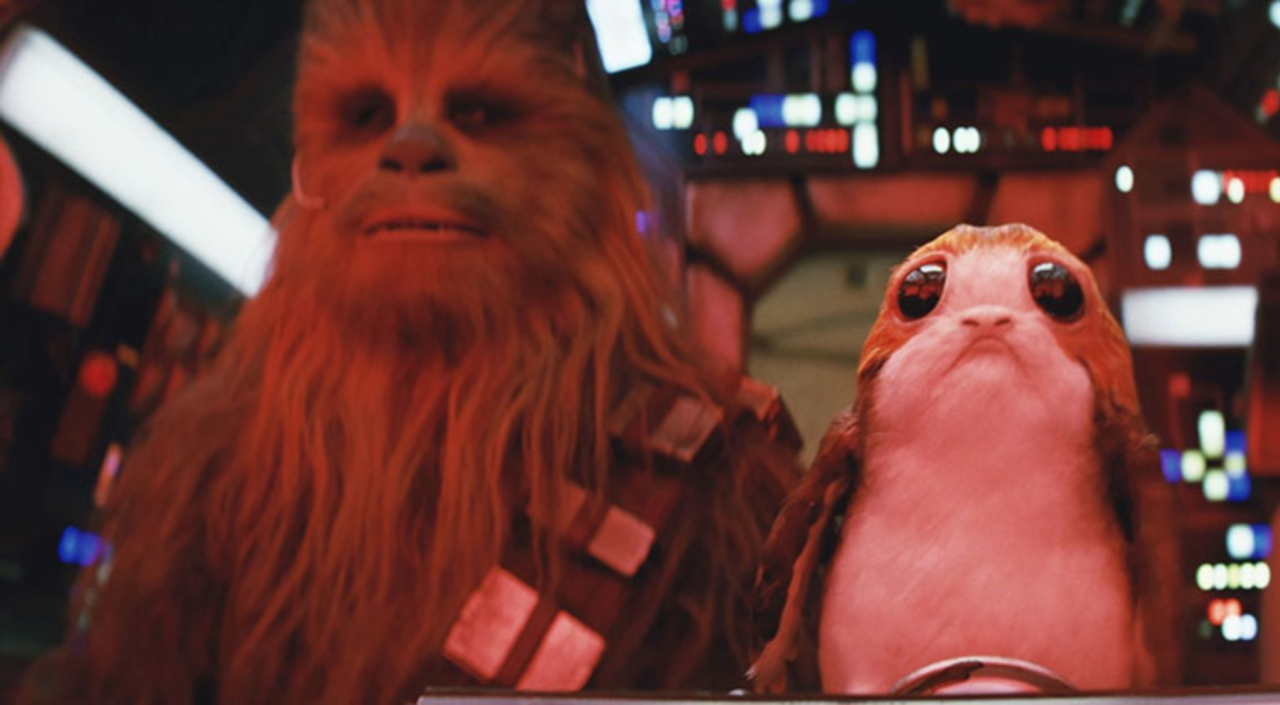 Daisy Ridley is once again in fine form as Rey, and her interplay with Adam Driver (Ben Solo/Kylo Ren) represents the new dramatic pulse of the sequels. The Last Jedi really starts pumping when it focuses on these two, as well as Luke, but when it doesn’t…

Now, let’s turn to the Dark Side of The Last Jedi. No, not the much ballyhooed “darker” tone, which is present…but not as much as you think since Rian Johnson keeps the light humor that J.J. Abrams established in the previous movie. Rather, there are actually parts that don’t really work in The Last Jedi, though mostly concealed by much of the press in its rush to coronate this movie as the next “Empire.”

The Last Jedi contains three movies in one—hence its running time—and the puzzle pieces feel hurriedly thrown together at times. Although it’s nowhere near the rehash fest that TFA was, this installment is weaker structurally because it has trouble focusing. While Rian Johnson does just enough to keep the audience on its toes, he’s still passing the baton off to the next director (J.J. again), with more secrets piling on secrets instead of a balance of revelation vs. mystery as in Empire.

And despite the movie’s length, we really don’t get a deeper understanding of the main characters. Both Oscar Isaac (Poe Dameron)—who is a star-level talent—and John Boyega (Finn) are given various things to do, but the scenes don’t shed anything new or interesting about them. The villains Snoke, General Hux and Captain Phasma are by turns more menacing and more ridiculous (almost unbelievably so) than they were in The Force Awakens.

We are introduced to several new characters on the side of the Resistance: some interesting, some who just fill up time, and some who are more cardboard than Mon Mothma. And then there’s the return of a much beloved character whose, uh, appearance makes you wonder if they’ve actually seen The Empire Strikes Back.

There’s a lot of talk of conflict in The Last Jedi, and if you truly search your feelings, you will sense the conflict in the movie itself…as it’s not sure what it wants to be but hopes everyone will love it anyway. Verdict: Arguably better or worse than the previous installment, The Last Jedi is still not an Empire yet.