Solo Review: Han Shoots First (But Don’t Get Your Hopes Up) 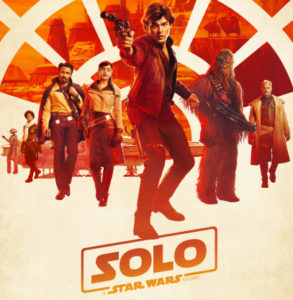 This is a Spoiler-Free Review: i.e. no major plot points, no plot recap. If you’ve seen the trailers and put the pieces together, then you’re safe.

Solo: A Star Wars Story, like 2016’s Rogue One: A Star Wars Story, is a movie that probably didn’t need to be made as it’s simply more backstory to which audiences basically already know the ending. It’s also opening just six months after The Last Jedi divided audiences and stirred up a backlash against Disney, director Rian Johnson and Lucasfilm president Kathleen Kennedy. And it’s been less than a year since veteran director Ron Howard took over for fired directors Phil Lord and Christopher Miller (The LEGO Movie) and re-shot 70% of the movie. Yes, 70%!

So there’s all that, and current year Han Solo (aka Alden Ehrenreich) looks and sounds nothing like Harrison Ford. You know, the guy who made this Han Solo character a huge cinematic icon.

With all its baggage, Solo seems like it’s limping into theaters. In its final form, there are indeed some cringe-y moments, and there’s a certain slapdash quality to the whole proceedings, which is not surprising considering the behind-the-scenes upheaval. But a funny thing happened on the way back to a galaxy far, far away for the 11th time: it’s not that bad.

So, in keeping with the theme of lowered expectations, here are a few troubling elements that you may find yourself overlooking:

Then there’s the whole thing with Paul Bettany. Dropped in by new director and old buddy Ron Howard—they worked together on the Academy Award-winning A Beautiful Mind—Bettany is a scratched-up space gangster who wields red laser knives and who also looks like he belongs in a different movie or franchise (but not the same one that L3-37 is in, either).

As for the actor who doesn’t look or sound anything like Harrison Ford, Alden Ehrenreich does as good a job as possible. You could even say he inhabits the role. Would that role be the real Han Solo? Well, think of it more akin to Chris Pine playing Captain Kirk. It’s not mimicry and it’s not necessarily homage, but it’s not deconstruction or subversion either. Just another guy playing a character with the same name. Not the end of the world.

However, thanks to co-screenwriter Lawrence Kasdan (you know, The Empire Strikes Back), there are certain beats and lines that sound like they certainly could’ve been played by Harrison Ford. And for a moment or two you wonder if Disney couldn’t have just cast Harrison Ford and made him look young like they did Kurt Russell in Guardians of the Galaxy 2.

The same can be said for Donald Glover, who also has an unenviable task of following up a legend, in this case the character of Lando Calrissian originally played (perfectly) by Billy Dee Williams. Glover adds his own comedic charm to his scenes and has good chemistry with Ehrenreich, which makes you wonder if any of their buddy moments are from that 30% left over from Lord and Miller.

Woody Harrelson (Tobias Beckett), Emilia Clarke (Qi’ra) and Thandie Newton (Val) are recognizable faces that round out the rest of the cast. Of course, there’s also Chewbacca (played again by Joonas Suotamo as in The Last Jedi), and now he’s wearing two bandolier straps instead of one! (Think of the toy possibilities…) They all do a good enough job, although Harrelson was more interesting in War for the Planet of the Apes.

Sometime after the gang picks up Lando, the movie starts to pick up some steam, and you might even find yourself having some fun and a few light chuckles along the way. The now-expected fan service and Easter eggs are tastefully done, although there are a couple clumsy attempts at interlocking the universe a la the Marvel Cinematic Universe (MCU).

Did this movie have to be made? Not really. It’s about half an hour too long, and it feels more like the first few episodes of a Netflix Originals Star Wars series.

Still, Solo is probably benign enough to escape the loathing fans have heaped upon other movies in the series. Time will tell, of course.