New Kids on the Block: Beats Music vs. Prime Music 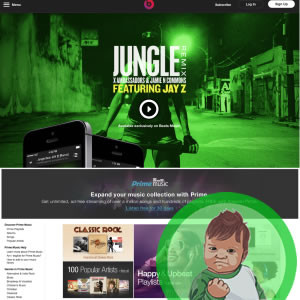 The on-demand streaming music space, which I last visited last fall for my Slacker Radio review, has gotten as crowded as a Bonnaroo mosh pit.

Beats Music, part of the popular Beats brand recently acquired by Apple for a cool $3 billion, launched earlier this year and has already amassed over 20 million tracks. With backing from Apple and industry connections via founders Dr. Dre and Jimmy Iovine, Beats Music is well-positioned to challenge streaming stalwarts such as Spotify and Pandora. 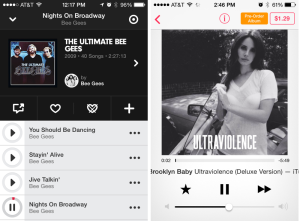 But it will be an uphill battle—right now the pay-only Beats Music service has less than 300,000 subscribers. Spotify? 10 million paying subscribers and counting. Nonetheless, Beats Music should eventually be able to leverage Apple’s user base, and then it will be a totally different ball game.

With that in mind, newbie Prime Music is ahead of the curve. Released just last week, Amazon’s on-demand, ad-free music service has a huge user base—Amazon is believed to have about 20 million Prime subscribers.

Prime Music currently has just one million tracks, which seems like a drop in the bucket compared to the 20 million-plus song catalogs of Spotify, Rdio and Beats Music. But for $99 a year, Amazon Prime members get free two-day shipping, streaming movies and TV shows and free ebooks in addition to the streaming music. It’s a compelling value proposition, and as we’ve seen in the past, it works.

I’m one of those millions of paying Spotify subscribers, and I’ve been pretty satisfied with the service from the start (see my review). While it may difficult to pry current subscribers away from their respective music services, I believe it’s still early in the game and the landscape could change.

I’ve had some time to play around with Beats Music and Prime Music. Let’s see if they’re worth all the hype.

It may now be owned by Apple, but let’s get one thing out of the way: Beats Music is definitely not iTunes Radio. Aside from the on-demand music (a big plus), Beats has a different aesthetic than Apple and iTunes, which is probably why the acquisition came as a surprise to so many.

Beats Music, like the popular Beats headphones, is all bold colors (red and black) and big buttons and text. iTunes still reflects the understated and streamlined Jony Ive look. 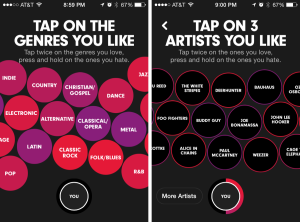 New Beats Music users must first start their account on the mobile app. Because the emphasis is on human-curated music, you select three favorite music genres and three favorite artists. Based on your initial choices, you’ll be presented with some playlists that have been put together by the Beats Music editorial staff, some of whom you may recognize from music publications like Pitchfork. You can also continue to like or dislike songs which will sharpen the music personalization.

Once you’ve gotten your account started on the mobile app, you can use the web player on your PC browser. I liked the design of the web player a bit more; you can tell a lot of thought went into how it works and looks.

The web player and mobile app had some mildly frustrating UI differences. For now, you can only create playlists and access your song library on the mobile app, although that access is “coming soon” for the web player.

Still, adding individual tracks, playlists or albums to your library and making them available offline on the mobile app were fairly easy. You simply press the big “+” button to find those options. The only limit to your offline storage is the amount of storage left on your mobile device. Well, technically, there’s a 15,000-track limit for your library, but you’re gonna run out of storage first. (Under settings, you can check how much room you have and how much you’ve downloaded.)

The full player screen features an oversized circular red ribbon known as “The Scrubber.” I didn’t like how it obscured the cover art, but it’s easy to fast forward or rewind by dragging your finger clockwise or counter-clockwise on it. 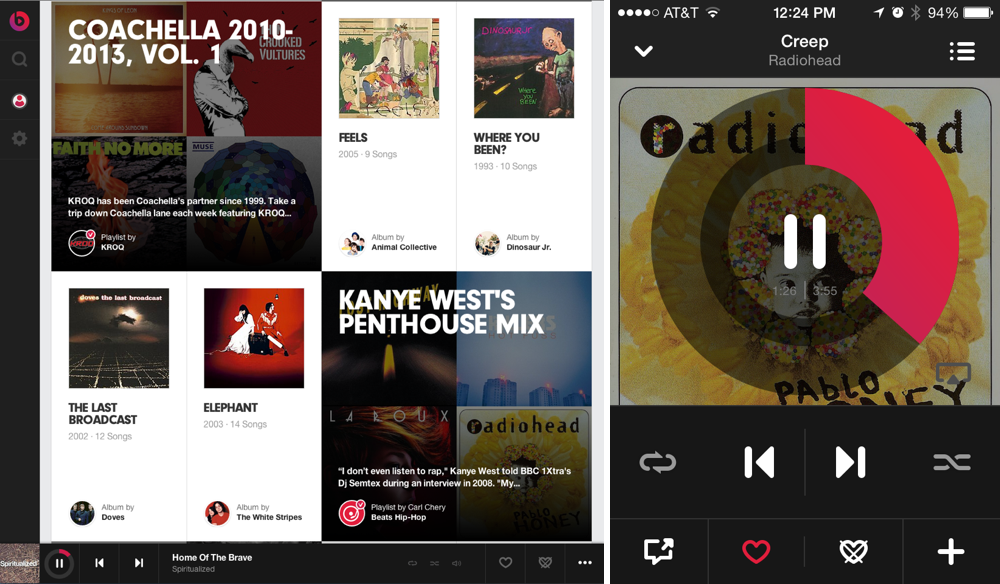 Overall, I think Beats Music is a compelling service that rivals Spotify and Rdio not only in catalog size but in the total music listening experience. They have gotten many little details right, from the carefully selected playlists to an intuitive UI. For new users not currently subscribing to any service, Beats Music is definitely worth checking out.

For Spotify users, in particular, there may not be enough overall difference to switch services, unless you take into consideration the lower annual rate and the promise of more Beats Music-exclusive tracks like the recently released Jay-Z remix of “Jungle.”

As I mentioned earlier, Prime Music has one million tracks, mostly from the Warner and Sony Music catalogs, in addition to independents. One very big label (read: the biggest) not currently represented is Universal Music Group, which means you’re missing out on Kanye West, Jay-Z, Lady Gaga, U2 and, yes, Elvis among many others. But, hey, you get Pink and One Direction!

In all likelihood, you’ll probably see Universal on Prime Music at some point. Just not now. There’s also this little six-month delay on new releases, but then let’s look at the bigger picture. As part of the $99 Amazon Prime membership, Prime Music is clearly not the main attraction, but it could be one day. (Case in point: Amazon Instant Video has grown by leaps and bounds and now features exclusive content licensing agreements like the recently added HBO shows.)

Prime Music represents, in some ways, an evolution of the Amazon MP3 store and Cloud Player. All three are now under the new Amazon Music umbrella. In addition to the one million tracks of on-demand music, you also have all your Amazon MP3 music purchases and automated digital rips of CDs you purchased from Amazon since 1998—that can be haunting—in your music library. You can also import music from your PC library with a separate app download.

The web player is integrated into the Amazon store, so while the design may not be as slick as Beats Music, Amazon scores points for familiarity. Searching for tracks is very easy, plus you also get playlists from real people a la Beats Music. However, you have to add a track or album to your library first before you can listen to it, which is kind of annoying. At least you can play music right away on the mobile app.

I thought the Amazon Music mobile app was generally well thought out save for one frustrating aspect: the very circuitous process to download individual tracks for offline listening. In fact, after I downloaded a single album track once, I was not able to repeat the feat for other individual tracks. Downloading full albums or playlists was easy to do, so this issue just seems to be a bug or oversight that will be corrected hopefully sooner than later.

Also, there was no system in place to like/dislike songs similar to Beats Music, although Amazon has shown in the past that they’re quite adept at user personalization.

My ratings for each service are below. I believe both will go up when Apple integrates Beats Music into its ecosystem and when Amazon acquires more content and the newly announced Amazon Fire phone starts selling. I plan to revisit this review sometime down the road.