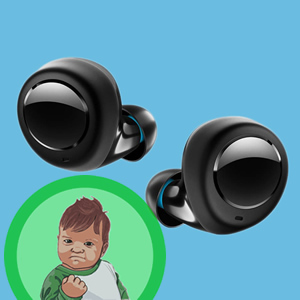 The Amazon Echo Buds ($130) are Amazon’s first foray into “true wireless” headphones, a burgeoning product category that evokes the in-ear devices that the Cybermen use to control people in Doctor Who. Considering the Echo Buds’ big feature is “always on” Alexa, we’re not that far from this terrifying nightmare scenario. (Just kidding, right?)

Are we under the control of the Cybermen?

Because Alexa is primed (heh) to hear your every word, the Echo Buds, true to their name, are the first truly portable Echo devices (sorry, Amazon Tap). Once you’ve done the initial setup with the Alexa app, you’re ready to talk to yourself–I mean Alexa—wherever you happen to be (Wi-Fi or mobile data required, of course). And don’t whisper: you need to say voice commands loudly, just like that annoying guy who’s yapping on the phone in public.

Amazon’s pretty good at recognizing the right price points for its products but after testing them out, in my opinion—and since we’re a deals site—it seems like $100 would’ve been just right for the Echo Buds. On Ben’s, we’ve seen the 2nd Gen Apple AirPods sell for as low as $130.

So expect the Echo Buds to get close to $100 around Black Friday.

The YMMV World of Headphones

In the box, you get 3 sets of silicone tips, plus 3 sizes of optional wing tips that wrap around the ear buds to help secure the fit. Because they insert deeper into the ear canal, the Echo Buds are more similar in form factor to Apple’s new Airpod Pros ($249) rather than the standard AirPods. Some people like this “in-ear” form factor, others don’t.

Echo Buds (7.6 g) are also heavier than the standard AirPods (4 g). After a few hours, I found them to be uncomfortable (and even more so with the wing tips), but as with any headphone, “your mileage may vary” with fit and comfort. 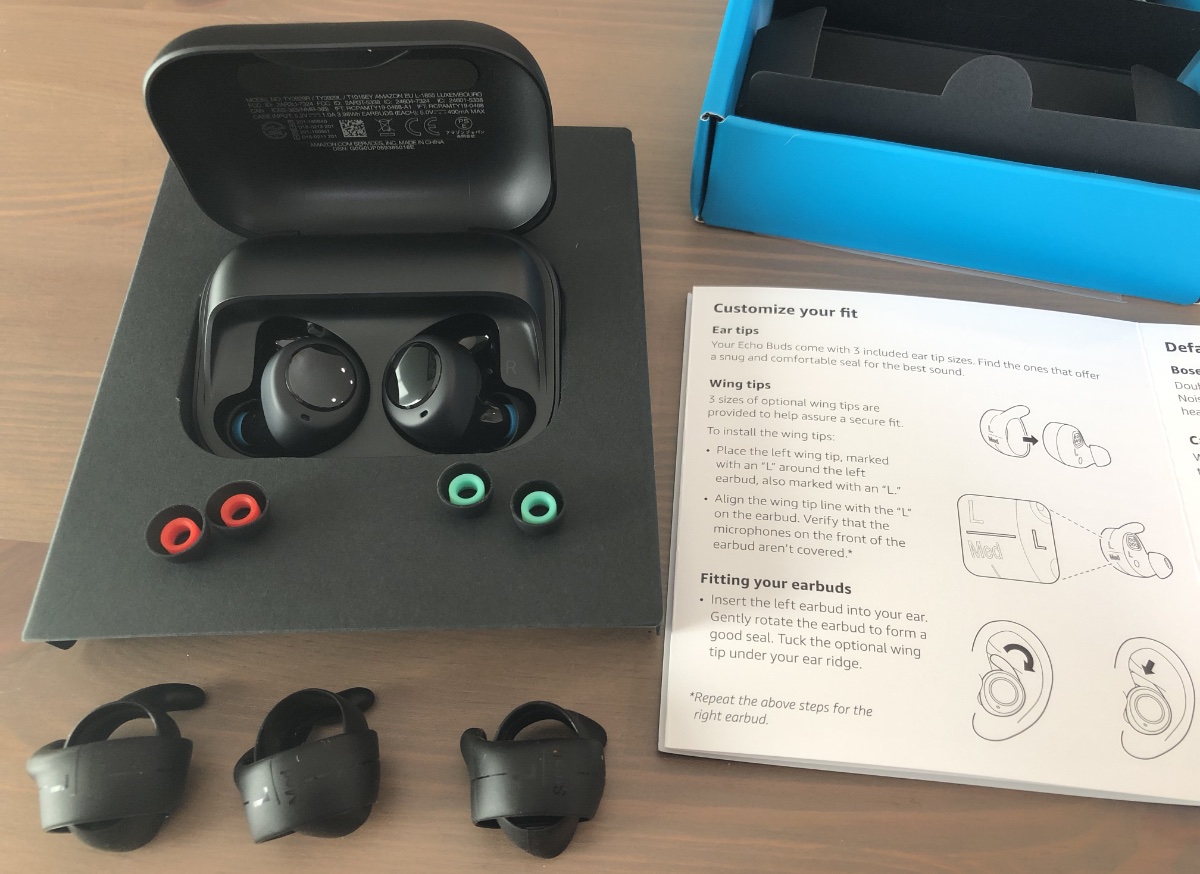 Setup via the Alexa app was less trouble-free than I expected. I recommend setting up the Echo Buds on the Alexa app before opening the case and it should go breezily. However, I opened the case first and played around with the different ear tips and wing tips, and they lost ability to pair with the phone. I put them back in the case again then took them out, and the problem was solved.

After a couple days of use, I encountered an annoying bug with the Echo Buds going offline after removing them from the case. The only way to get them online again was to put them back in the case and “pair” them by pressing the small button on the bottom of the case. And it’s not a battery issue because the buds were nearly fully charged.

Then I found this Amazon forum where people have been complaining about the same issue.  Hopefully it can be fixed with a firmware update or app update. Obviously, we’re at version 1.0 and these kinds of bugs tend to get worked out, but it’s something to consider.

One workaround when you’re in the company of other listening Echo devices (or simply in a noisy environment) is to tap the ear buds to trigger Alexa, but I had varied success with this manual solution and sometimes she never responded.

In general, the touch controls are finicky, plus you can’t adjust the volume with them (you must use your phone controls or voice command).

The Alexa app does allow for some nice customizable features, like changing your voice assistant to Siri or Google Assistant.

Some consumers will have privacy issues with the always-on Alexa. The mics do turn off when you take the mics out of your ears and they can also be muted via the touch controls or app. 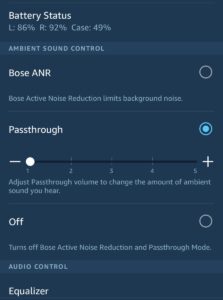 Echo Buds advertise the Bose Active Noise Reduction (ANR) feature, but if you’ve ever used Bose’s products with active noise cancelling, you will notice immediately they are not the same. Amazon isn’t claiming the Echo Buds are noise cancelling, but you can see the confusion. ANR didn’t cut out much ambient sound for me, but that’s also a product of how good a seal you can get (again, YMMV).

Switching to Passthrough mode is supposed to enhance outside sound to allow you to hear conversations better (and not be anti-social). The result is increased digital noise, like someone jacking up the gain on ambient sound (you can adjust the levels).

Sound is about what I’d expect from these kinds of headphones: lacking in low end with an average soundstage. You can fiddle with EQ in the Alexa app.  If you’re listening to streaming music and YouTube and audiobooks, the Echo Buds do just fine. Phone calls and clarity were also satisfactory, though a bit quiet. There were no dropouts within the standard Bluetooth range.

The Echo Buds are rated at 5 hours of battery life, and I found them to be in the range of 4+ with normal use. It would’ve been nice if the case were wireless, but most people won’t care (nor will they care that it’s a micro USB cable instead of the newer USB-C).

Despite some early bugs, the Echo Buds are fun to use with the rewarding hands-free Alexa feature, and they do what they’re supposed to do, which is to let you enjoy audio without wires—whether you’re sitting, walking, running or washing the dishes.

I recommend waiting for them to drop in price for the holidays and remember to set a deal alert on Ben’s!