Amazon Prime Day was a Bust for Deal Hunters! 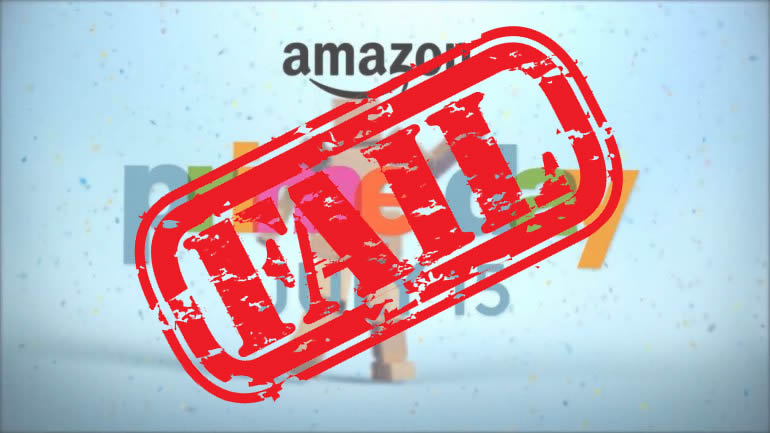 Prices on Amazon’s own products were worse or no better than previous sales.

Many Lightning Deal categories were flops. Our Top Three Worst include:

Who won on Amazon Prime Day?

The 35% off one grocery item was good, if stacked with the 5% off w/ Subscribe & Save promotion. The extra 15% off Warehouse Deals was also a never before seen general percentage off coupon. The $10 promo credit w/ gift card purchase was also a very strong offer.

Product categories that benefited from discounts included men’s shoes / accessories (the extra 30% off discount made for some great prices on Ray-Bans and athletic shoes) as well as baby gear (the 25% off Graco and Britax promotion was excellent on car seats and strollers).

Microsoft launched some very strong sales on laptops today beating Amazon’s prices, most of which sold out within a few hours. Macy’s launched an aggressive clearance sale and free shipping site-wide on all orders, a promotion that was even better than their Black Friday shipping deal. Newegg’s deal offerings were scattered, but offered some killer deals on home theater gear and backpacks, all of which beat Amazon’s prices.

Walmart’s online sales were even worse than Amazon, despite attempting to garner attention by picking a fight with Amazon on the company blog this week. The majority of the sale prices matched existing deals in the clearance section prior to today; most of the “Rollbacks” were insignificant.

As mentioned earlier, Twitter users had an absolutely blast picking apart Amazon’s pseudo Black Friday in July. Here’s a sampling of our favorites:

Personally I would say I offer better deals than #AmazonPrimeDay and that’s saying something.

“When I die I want whoever’s responsible for #AmazonPrimeDay to lower me into my grave so they can let me down one last time.” – Unknown

#AmazonPrimeDay would be awesome if I needed Tupperware , granny panties, or short socks. 😳

#AmazonPrimeDay = the next April Fools day.