Both Amazon and Roku have added to a relatively new product category this week, soundbars with a built-in user interface to access smart TV functions for streaming video. This product is likely marketed at consumers with older “dumb” televisions or perhaps users with older generation smart TVs / streaming devices & want to upgrade to faster interfaces. 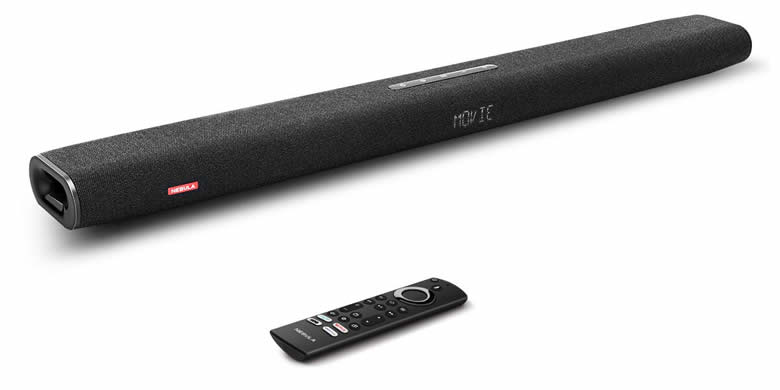 The Amazon Nebula is seen above, yet another speaker for the home that will act as an Echo device. It offers the Fire TV interface for streaming (identical to Fire TV stick or cube), 100W of sound, 4K HDR support and Alexa support. It’s going to be released on November 21, 2019 and the retail price is $229.99. Expect to see a Black Friday discount at debut, likely between $50 to $100.

The Roku Smart Soundbar (seen above) debuts at a MSRP that’s already $50 less than the Nebula, $179.99. Roku expects to ship it a month earlier as well, around October 13, 2019. It will include the smart TV interface used by standalone Roku devices as well as TCL televisions. It also offers 4K HDR support as well as voice support via Google Assistant. Expect to see deals shaving $20 to $30 off the MSRP as we move into November 2019.

Here’s how the two soundbars compare:

While Amazon is attempting to include a bass-like experience with the 3″ speakers, Roku is releasing a companion subwoofer with their soundbar. Completely wireless, the Roku subwoofer offers a 10-inch driver and can be placed up to 30 feet from your television. Hypothetically, you could also pair it with wireless speaker sets and use the soundbar as a center channel in a 5.1 setup.

Of course, you can always save even more money by purchasing a $100 soundbar without smart TV functionality and snag a streaming stick when the devices go on sale around the $20 to $25 range. This Vizio soundbar with sub is a popular option when it falls to a sub-$100 sale price, typically during November / December. The Fire TV stick dropped to $25 during November 2018. The Roku streaming stick dropped in price significantly as well.

You can find the most recent deals on smart televisions, streaming devices, soundbars and other home theater products in our electronics deal feed on Ben’s Bargains.